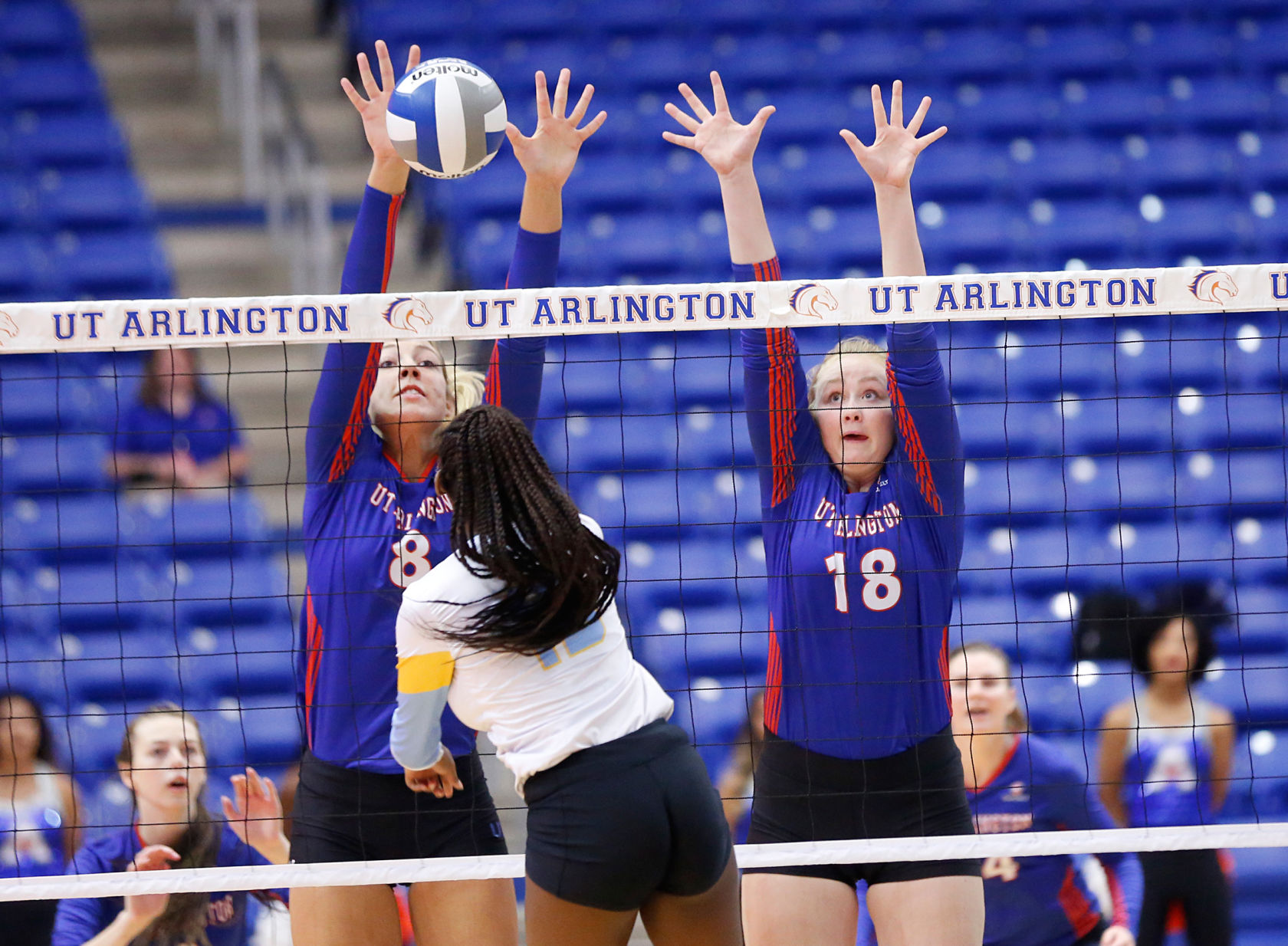 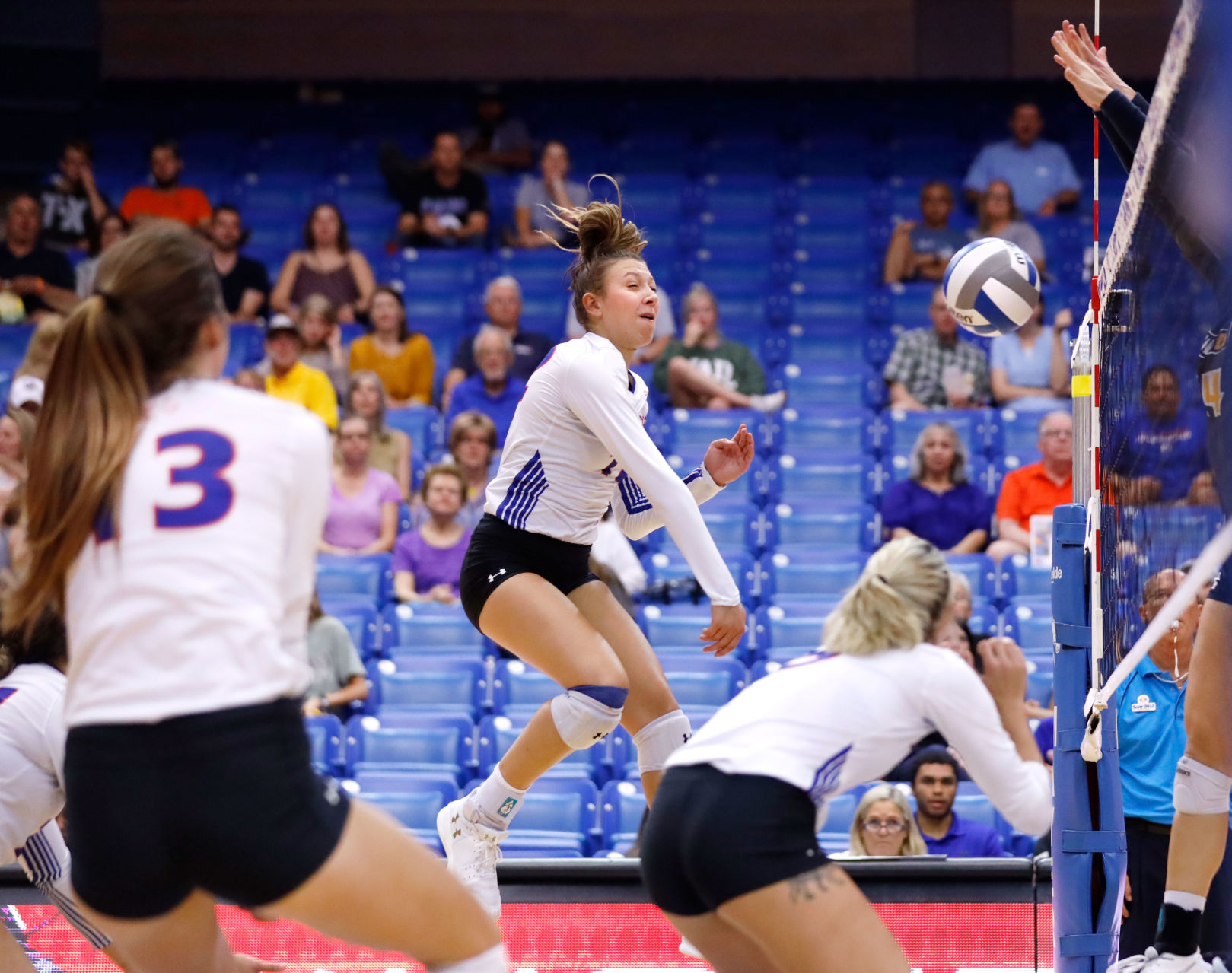 Sophomore outside hitter Brooke Townsend sends the ball over the net during a match against the University of North Carolina at Greensboro on Sept. 7 at College Park Center. Townsend made the All-Tournament team for her performance over the weekend.

Sophomore outside hitter Brooke Townsend sends the ball over the net during a match against the University of North Carolina at Greensboro on Sept. 7 at College Park Center. Townsend made the All-Tournament team for her performance over the weekend.

The volleyball team (4-2) rounded out tournament play with a sweep over Southern University and a thrilling five-set loss to the University of North Carolina at Greensboro in the 2019 Maverick Classic on Saturday at College Park Center.

Two UTA outside hitters were named to the all-tournament team after the tournament; senior Kylie Jedlicka, who posted 32 kills, 27 digs and six service aces over the weekend and sophomore Brooke Townsend, who tallied 34 kills and 18 digs.

Head coach J.T. Wenger said last weekend the team snagged wins that maybe should have gone the opponents’ way, but UTA was on the receiving end of having a victory snatched away from its grasp.

UTA and Southern opened the match in a battled first set, with Southern keeping the hosts on their toes to start the period in a tight affair. The Jaguars led 9-8, but the Mavericks went on a 10-3 run to jump ahead 17-12.

Wenger said it took the team some time to get its gears into check, but once things meshed, it was a clean finish for UTA in the final set.

UTA righted the ship and started the third set on a 12-3 run. The Mavericks only allowed a further eight points to take the set 25-11 for the sweep.

Townsend said as the weekend wore on, the opponents became a bigger challenge for UTA after each match. The team learned each play needed to be fought for following the loss to UNC Greensboro, she said.

“Coming into the tournament, we knew that no one was going to hand us points, especially Greensboro,” she said.

The Mavericks dropped their first set of the weekend as the Spartans took an early 10-3 lead. UTA slowly chipped away at the lead with a 19-12 run, cutting the deficit 22-21, but UNC Greensboro took the set 25-22.

The Mavericks came alive in the third set with an opening 9-1 run. Blocks along the net helped UTA gain momentum as the Spartans tried to battle their way back into the set, but the Mavericks’ attack was too much as UTA stampeded to a 25-12 set win, taking a 2-1 advantage.

The fourth set was end-to-end as both sides exchanged leads by one. UNC Greensboro edged forward to lead 15-11 following several extended rallies, but UTA tied it at 20-all.

UTA thought it had reached match point, but officials overturned a call that put UNC Greensboro within one, turning the tides as the visitors took the set 25-23.

Wenger said the team had a chance to take the match in the fourth set but just fell short, setting up a doomed fifth set.

“We learned that every play matters and momentum shifts in a big deal,” Wenger said.

The Spartans opened the fifth set on a 3-0 run before the Mavericks tied it back up at 3-all following a touch challenge. Tied at 5-5, UNC Greensboro made a six-point run to open a gap of 13-7. UTA battled back from the deficit to cut the lead to just one, but the Spartans closed out the match with two final points to take the win.

Jedlicka posted a double-double — 11 kills and a team-high 17 digs — in five sets. She said the team let outside factors such as referees and the numerous shifts of play get in its head.

“You’ve got to hone in on what’s important and get back to what you need to do,” she said.

UTA will travel north to take part in the Cougar Challenge next weekend at Washington State University.