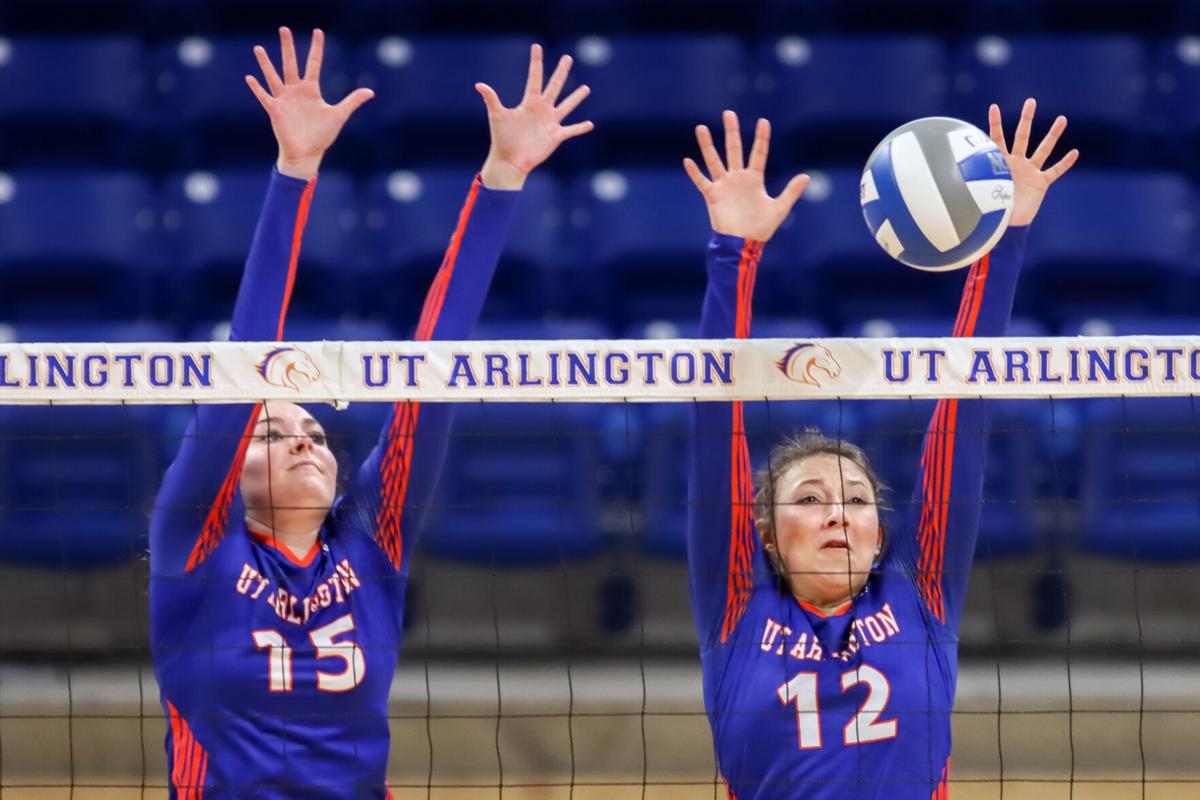 Freshman middle blocker Kortney Puckett, left, and junior outside hitter Brooke Townsend jump at the net to block during a match against Arkansas State University on Oct. 17 at College Park Center. Townsend recorded 19 kills in the match against the Red Wolves. 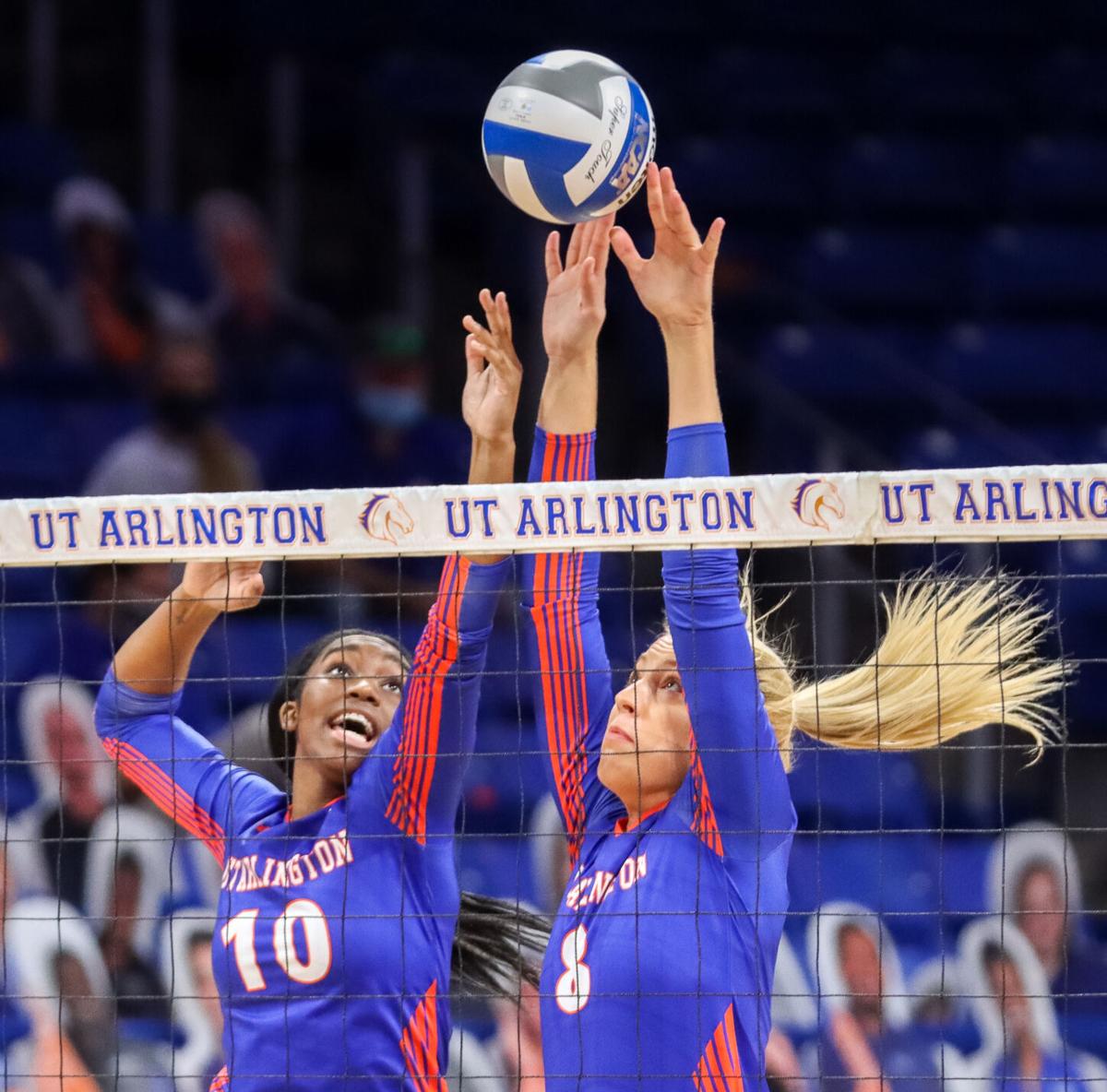 Freshman outside hitter Briana Brown, left, and junior middle blocker Michaela Wright block a hit during a match against Arkansas State University on Oct. 17 at College Park Center. Wright and Brown had two blocks each in the match. 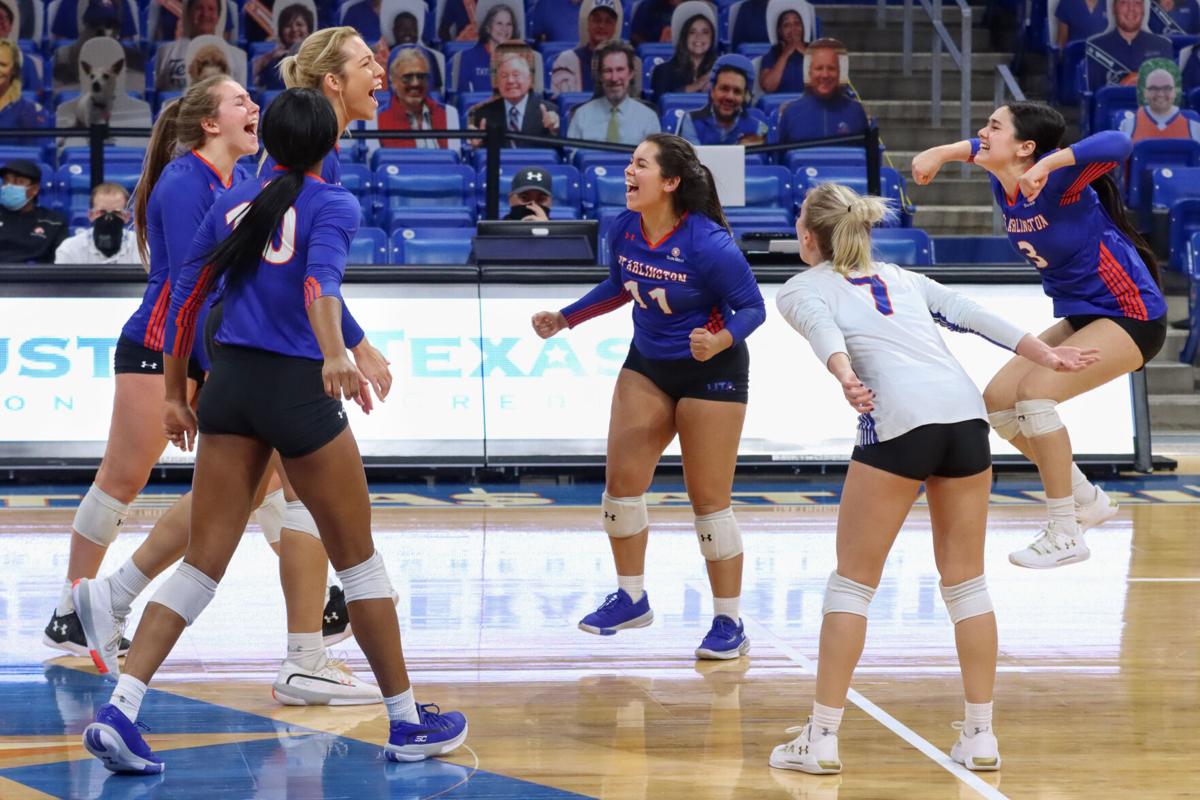 The UTA volleyball team celebrates after a point during a match against Arkansas State University on Oct. 17 at College Park Center. The team fell to the Red Wolves three sets to one.

The volleyball team (5-1, 5-1) went down 3-1 in its first loss of the season against Arkansas State University on Saturday at College Park Center.

Both teams went back and forth in the match’s first set, exchanging scoring runs of three points. The Red Wolves cut the UTA lead down to 18-17, until UTA went on a three point run extending the lead to 22-19.

UTA went on to take the first set 25-21. Freshman outside hitter Brianna Ford led the team in kills with seven.

After the second set, Ford and junior outside hitter Brooke Townsend had 10 kills each to lead UTA.

Arkansas State took an 11-8 lead early in the third set until UTA bounced back, scoring three points in a row to tie it at 11-11.

Early in the fourth set, UTA trailed by four with a score of 7-3. Arkansas State extended its lead to six points, leading 19-13. Late in the fourth, UTA cut into the lead, bringing it to a three-point contest at 21-18.

Townsend and Ford were tied with a team-high 19 kills on the day, while junior setter Kylee Kapp led UTA with 33 assists and sophomore libero Alli Wells led the team in digs with 27.

He said he expects his team to learn from Saturday’s match and see how they can improve in practice sessions throughout the upcoming week.

“We turn the page, and we get to play two matches on Friday,” Wenger said. ”That will come up quick, there's a lot to learn from this match.”

Wenger said the positive aspect of the series against Arkansas State was that the Mavericks can learn from the experience and keep advancing as a program.

“I think these matches were a great experience for our athletes, we had some tight ones last weekend as well, but this was just a different type of slugfest,” Wenger said.

The Mavericks will be on the road next week for a three-match series against the University of Louisiana Monroe starting 11 a.m. Friday at Fant-Ewing Coliseum in Monroe, Louisiana.