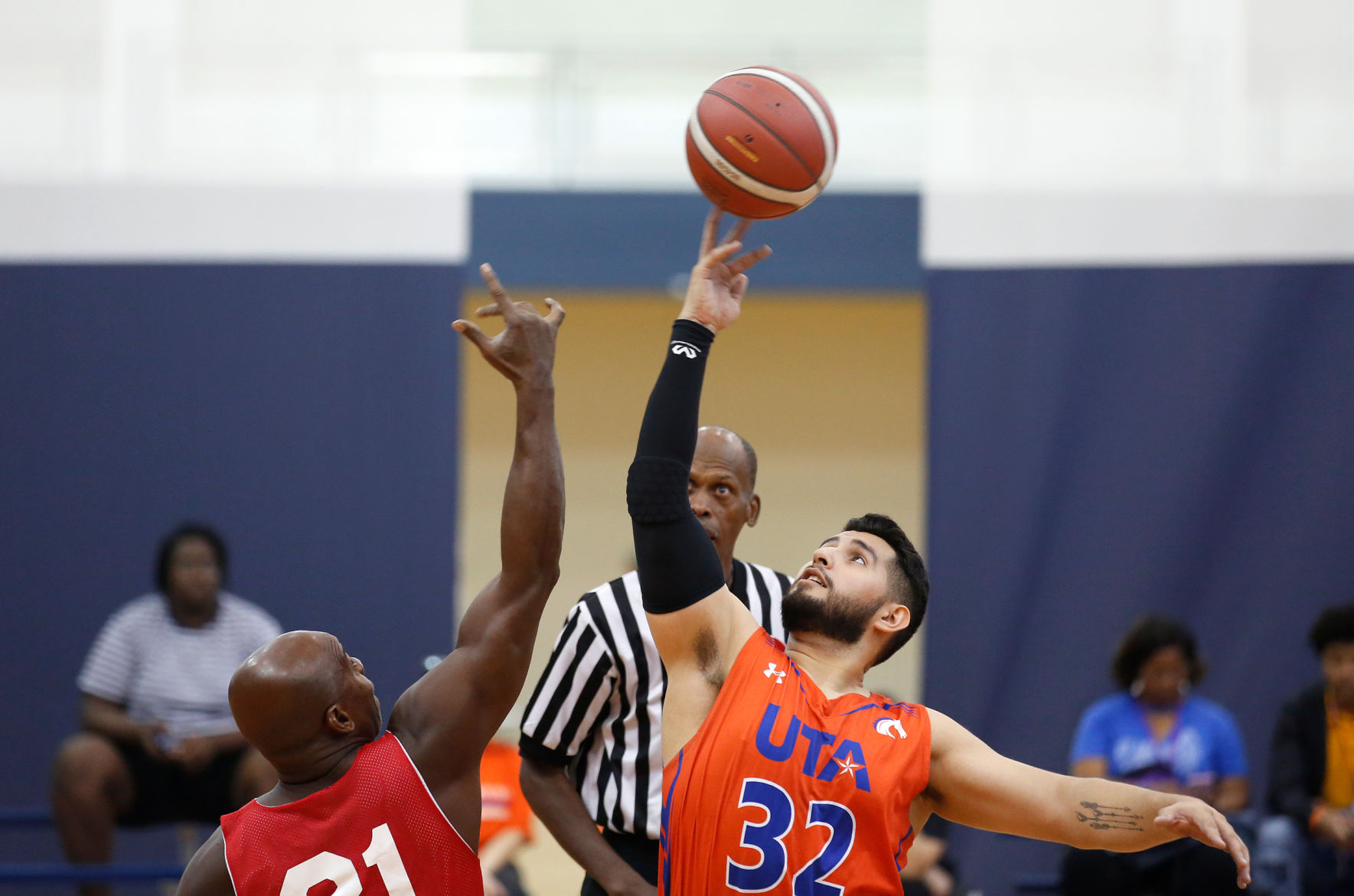 Movin' Mavs senior Fabian Romo reaches for the ball during the game against the Tulsa Jammers in the Parent and Family Weekend: Movin' Mavs Tournament on Oct. 19 at the Maverick Activities Center. The Movin' Mavs ended the first quarter with a 28-4 advantage. 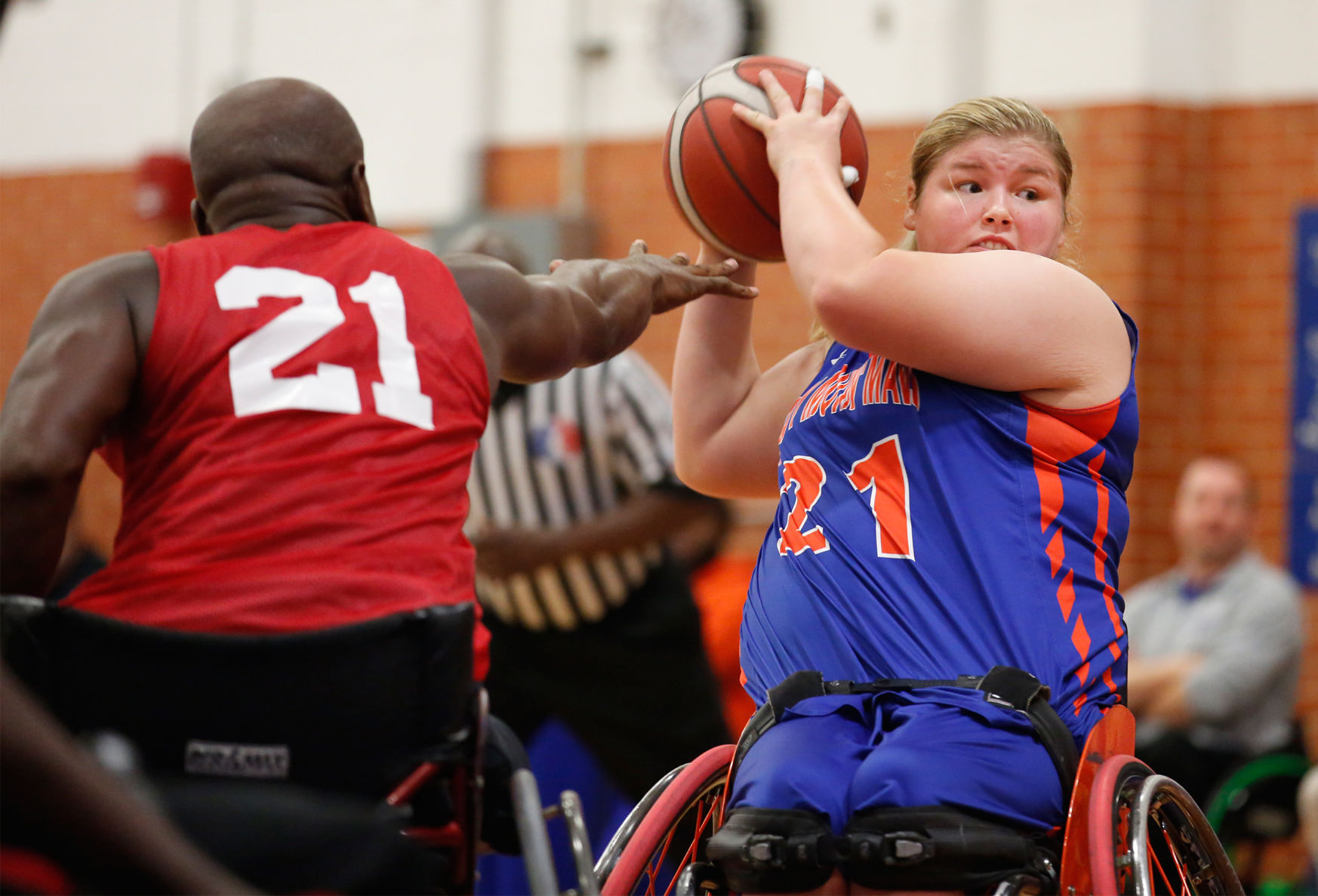 Rachel Kroener, Lady Movin’ Mavs senior, goes up against a defender from the Tulsa Jammers during the Parent and Family Weekend: Movin’ Mavs Tournament on Oct. 19 at the Physical Education Building. Kroener totaled 13 points during the game.

Movin' Mavs senior Fabian Romo reaches for the ball during the game against the Tulsa Jammers in the Parent and Family Weekend: Movin' Mavs Tournament on Oct. 19 at the Maverick Activities Center. The Movin' Mavs ended the first quarter with a 28-4 advantage.

Rachel Kroener, Lady Movin’ Mavs senior, goes up against a defender from the Tulsa Jammers during the Parent and Family Weekend: Movin’ Mavs Tournament on Oct. 19 at the Physical Education Building. Kroener totaled 13 points during the game.

The Parent and Family Weekend: Movin' Mavs Tournament marked the start of the season for UTA’s wheelchair basketball teams, the Lady Movin’ Mavs and Movin’ Mavs.

The Lady Movin’ Mavs tipped off their season with a 65-42 win over the Tulsa Jammers.

Junior Annabelle Lindsay topped the scoring with a game-high 17 points, all in a dominant first-quarter showing. Head coach Jason Nelms said the Australian national team member has stepped up as the team’s leader and since it wasn’t a game of consequence, Lindsay only saw minutes in the first quarter to avoid injury.

“She proved in the first 10 minutes that she could dominate that whole game if she wanted,” he said.

Senior Rachel Kroener took over the scoring responsibilities in the latter two quarters, tallying 11 of her total 13 points. Nelms said he’s glad she can fill in a scoring role and that he’s used Kroener in many roles over her five years with the team.

Nelms said freshman Elodie Tessier did well to control play on the court and hit layups while getting more comfortable with the lineups the Lady Movin’ Mavs ran.

Overall, Nelms said the game was a good starting point to get everyone on the same page and for all the players to understand their role.

The Movin’ Mavs tipped off their season with a 75-17 win over Tulsa.

Head coach Doug Garner said his veterans and high-pointers did well to try to get all the players involved. This led to a balanced attacking output in the first half, with eight of the 11 players in the squad getting on the scoreboard.

Senior Fabian Romo led the attack in the first half, scoring 11 points, and ended the game with 13 total points. Freshman Garrett Castillo came alive in the second half to score 12 total points, while senior Clarence McCarthy-Grogan tallied 10 points across the game.

Garner said many players in key areas across the floor have stepped up, and the chemistry is where it needs to be to start the season.

“I was pretty pleased with all [six lineups],” Garner said. “We missed a few free throws, missed a few layups, but we’re at a good spot for October.”

The Movin Mavs defeated Oklahoma City 96-34 on Saturday in its second game of the tournament.

Early in the first quarter, the Movin’ Mavs took control of the game with a 10-0 run that ended with a 27-16 lead at the end of the 1st quarter.

Romo said the offense took advantage of several fast break situations that the team had worked on during practice.

Oklahoma City stayed in the game with outside perimeter shooting, but the Movin’ Mavs adjusted their defense to contain the long perimeter shots.

McCarthy-Grogan said the Movin’ Mavs’ defense began to concentrate on the opponent’s best shooters to limit their offensive scoring.

The Movin’ Mavs took a commanding 85-30 lead over Oklahoma City late in the second half.

Garner credits his team for playing smart basketball in all phases of the game.

“I really like the defensive intensity, the pressure on the ball [and] playing smart in the passing lanes when you knew you could overplay because you had speed on the opponent. So, real pleased with that,” Garner said.

After being sidelined for two weeks because of a concussion, Castillo, who made his official return to the line up in the first game, scored eight points in the fourth quarter to help the Movin’ Mavs close out the victory over Oklahoma City.