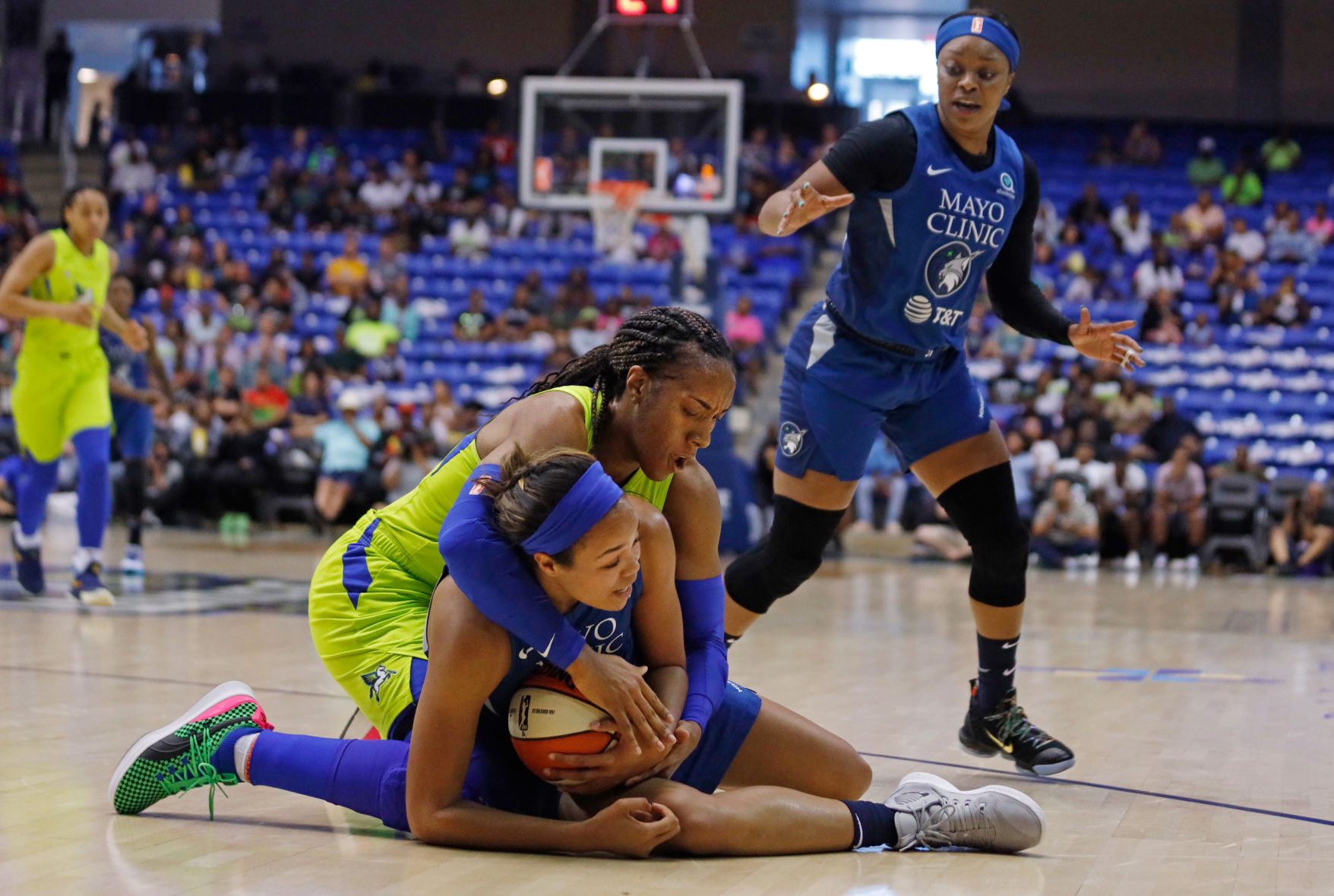 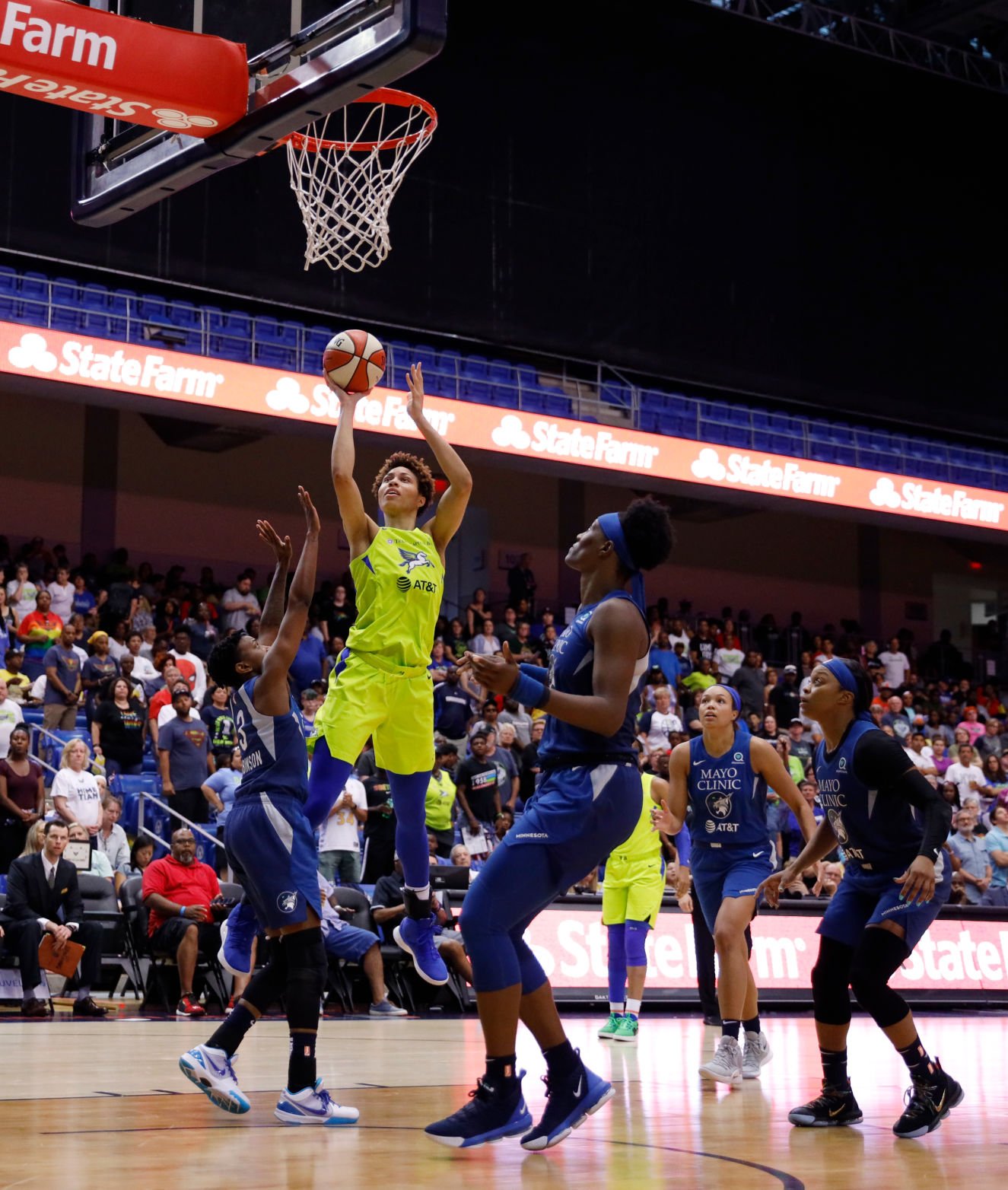 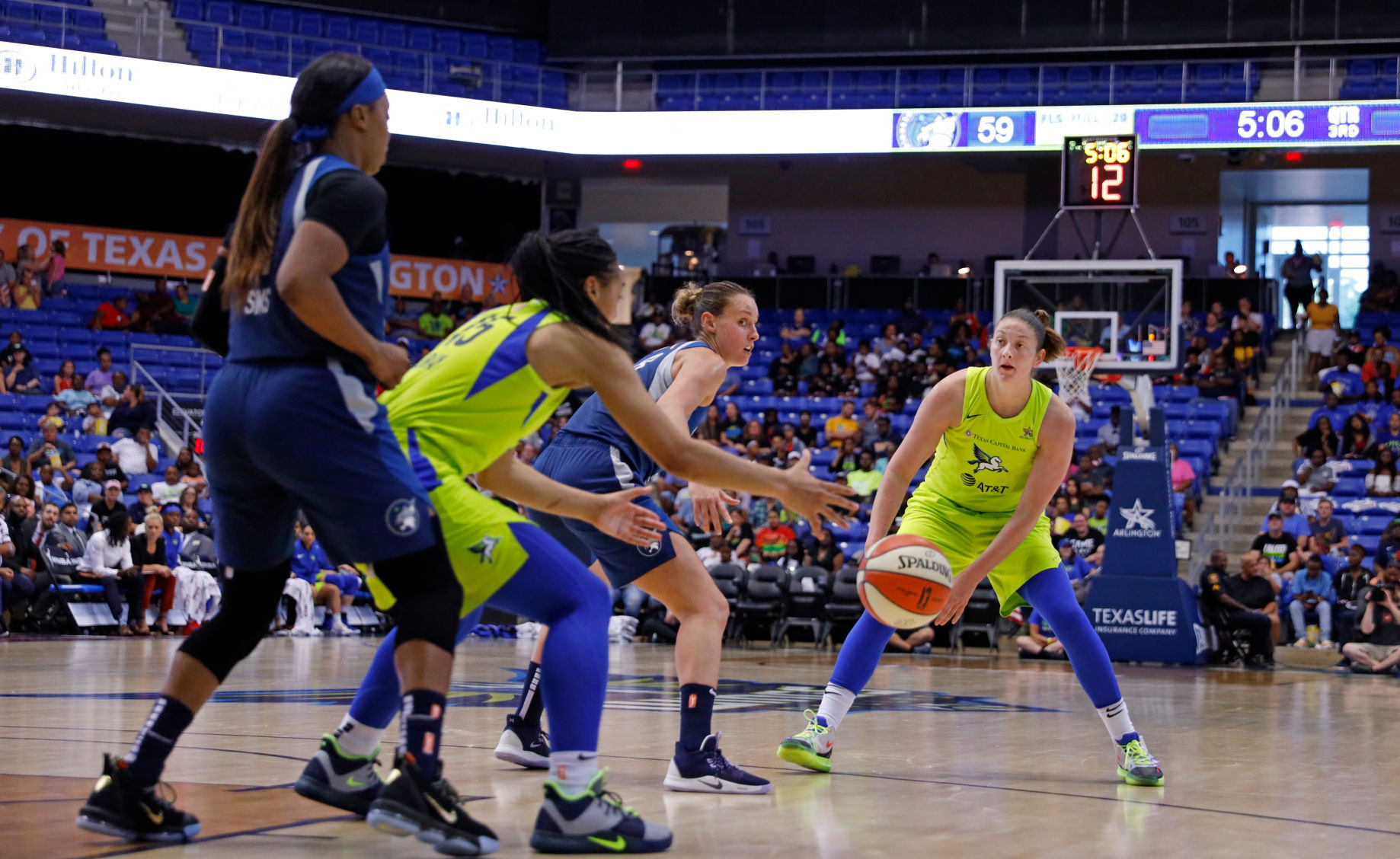 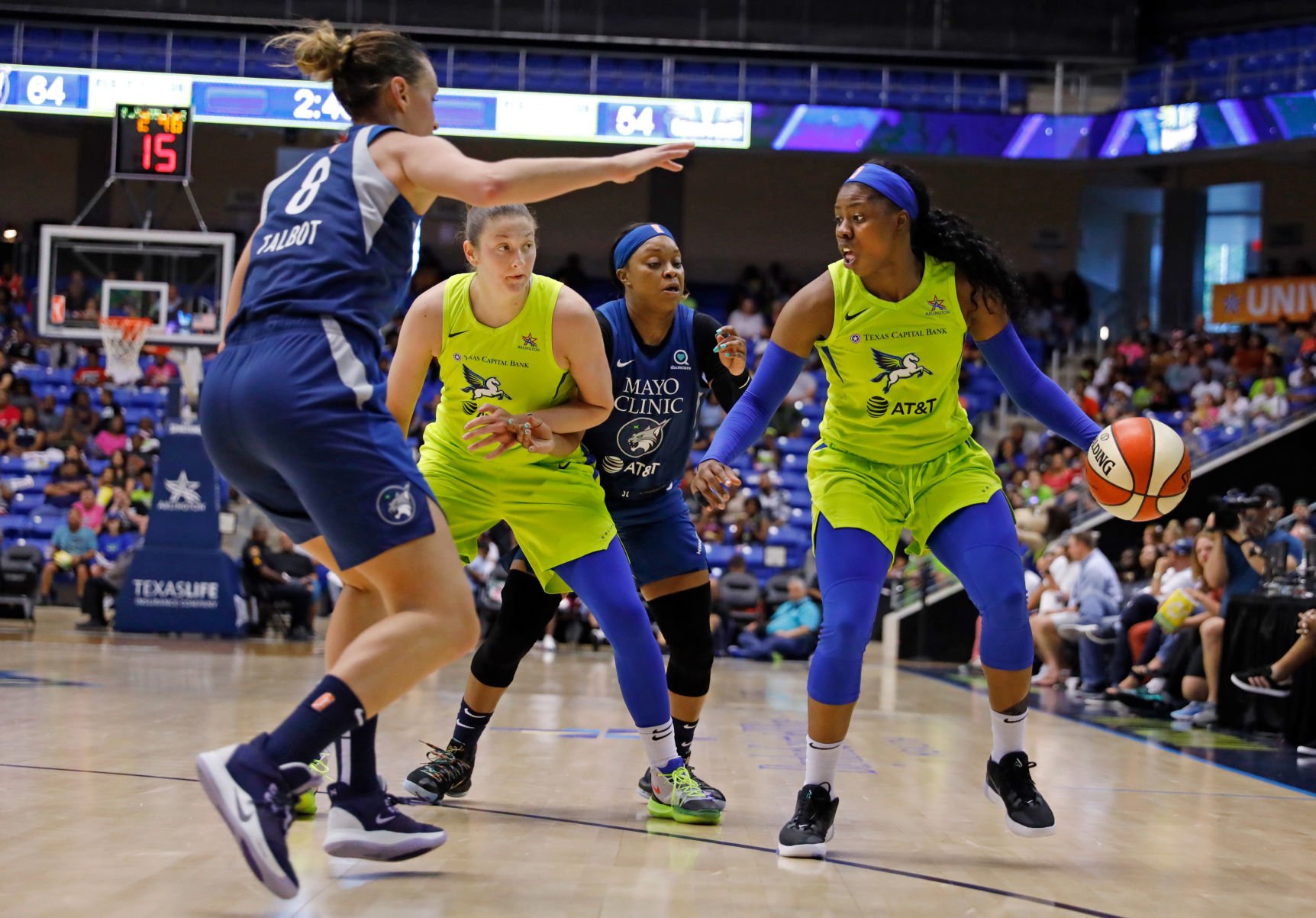 Dallas Wings guard Arike Ogunbowale looks to pass the ball at the Dallas Wings match against the Minnesota Lynx on June 30 at College Park Center. Ogunbowale scored a team-high 19 points. 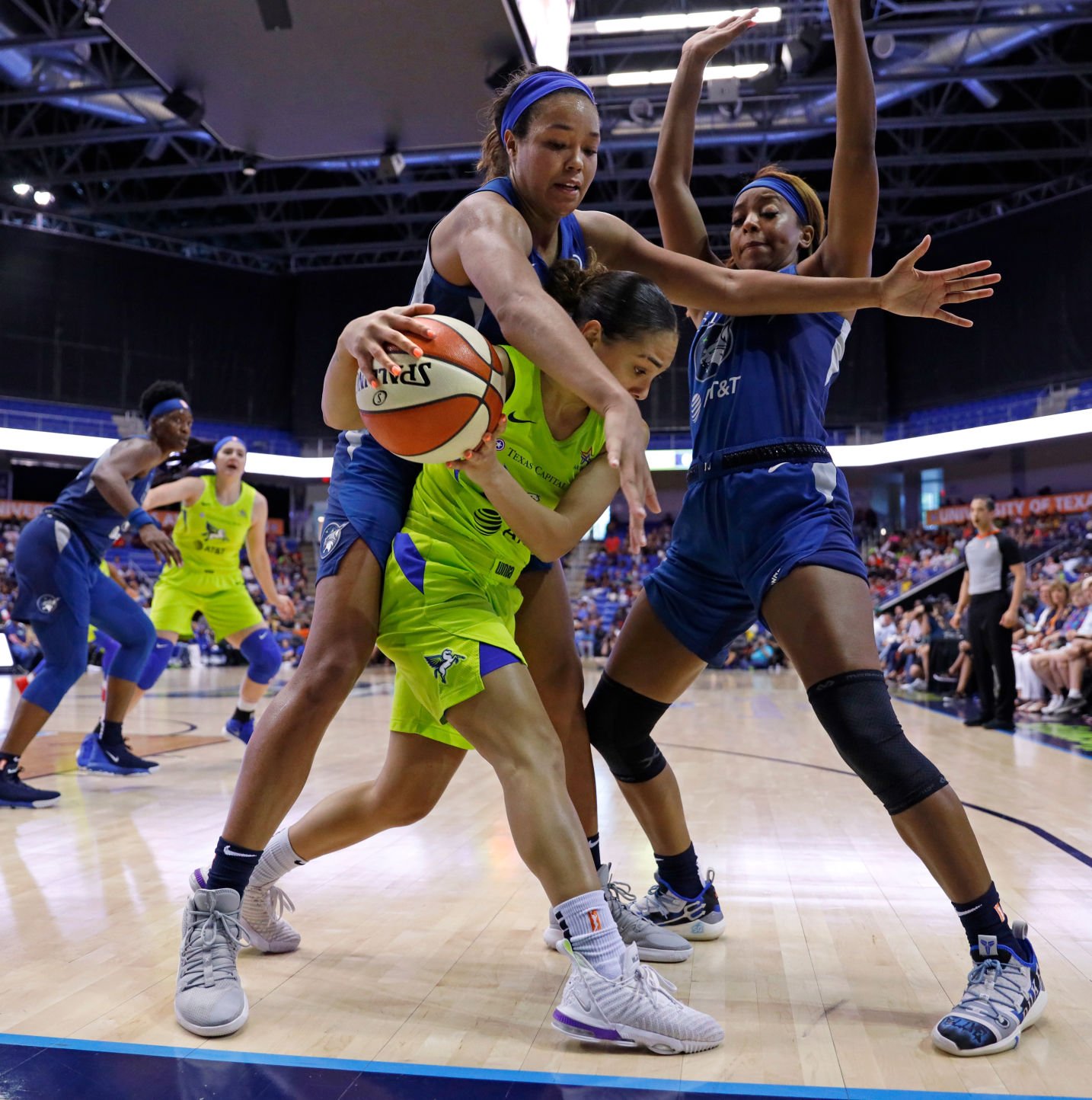 Dallas Wings guard Arike Ogunbowale looks to pass the ball at the Dallas Wings match against the Minnesota Lynx on June 30 at College Park Center. Ogunbowale scored a team-high 19 points.

The Dallas Wings (4-7) extended their home winning streak after defeating the Minnesota Lynx (6-6) 89-86 on Sunday at College Park Center.

Head coach Brian Agler said his team showed resilience and composure in the game despite being down by 12 points at the end of the first half.

“We hurt ourselves, we got the lead and gave it back up but we hung around,” Agler said. “I was really happy with how we executed on out of bounds plays.”

Both teams looked evenly matched in the early part of the first quarter. Dallas and Minnesota traded the lead three times and tied the game up twice by the five minute mark of the period.

Forward Kayla Thornton collected a quick seven points on 3-4 shooting from the field, while Minnesota guard Danielle Robinson put up 10 points on 3-3 shooting.

The Lynx closed out the period with a 23-21 lead with Robinson leading the team in scoring with 10 points. Thornton led the Wings with 10 points and three rebounds.

Minnesota gave itself some breathing room at the six minute mark of the second quarter as it took a 34-25 lead, its largest lead up to that point in the matchup.

The Lynx closed out the first half with a 53-41 lead. Guard Odyssey Sims led Minnesota in scoring with 14 points on 5-11 shooting, while Thornton and forward Theresa Plaisance led the Wings with 10 points each.

Dallas couldn’t regain the lead in the third quarter as the Lynx closed out the period with a 69-63 lead. Forward Kaela Davis hit a 3-pointer as the period wound down to bring the Wings within six points, which was the closest they came to cutting the deficit.

The Wings went on a quick 8-0 scoring run capped off by a 3-pointer from Davis to regain the lead early in the fourth quarter. Both teams traded the lead seven times throughout the period before Dallas was able to close it out.

“You can’t really focus too much on who’s up, who’s down,” Davis said of the game’s lead changes. “You just gotta focus on executing down the stretch and I think we did a good job of that.”

Davis drew an offensive foul and center Imani McGee-Stafford finished two free throws to seal the 89-86 victory for the Wings.

Agler said the Wings’ improvement on out of bounds plays had a large role in picking up the victory on Sunday.

“When we were going through training camp, we couldn’t execute out of bounds plays. We couldn’t absorb something drawn up and then go out and apply it,” Agler said. “It’s sort of rewarding to see a team then execute in a tough situation.”

The Wings will look to add another home win when they host the Indiana Fever at 7 p.m. Friday at College Park Center.