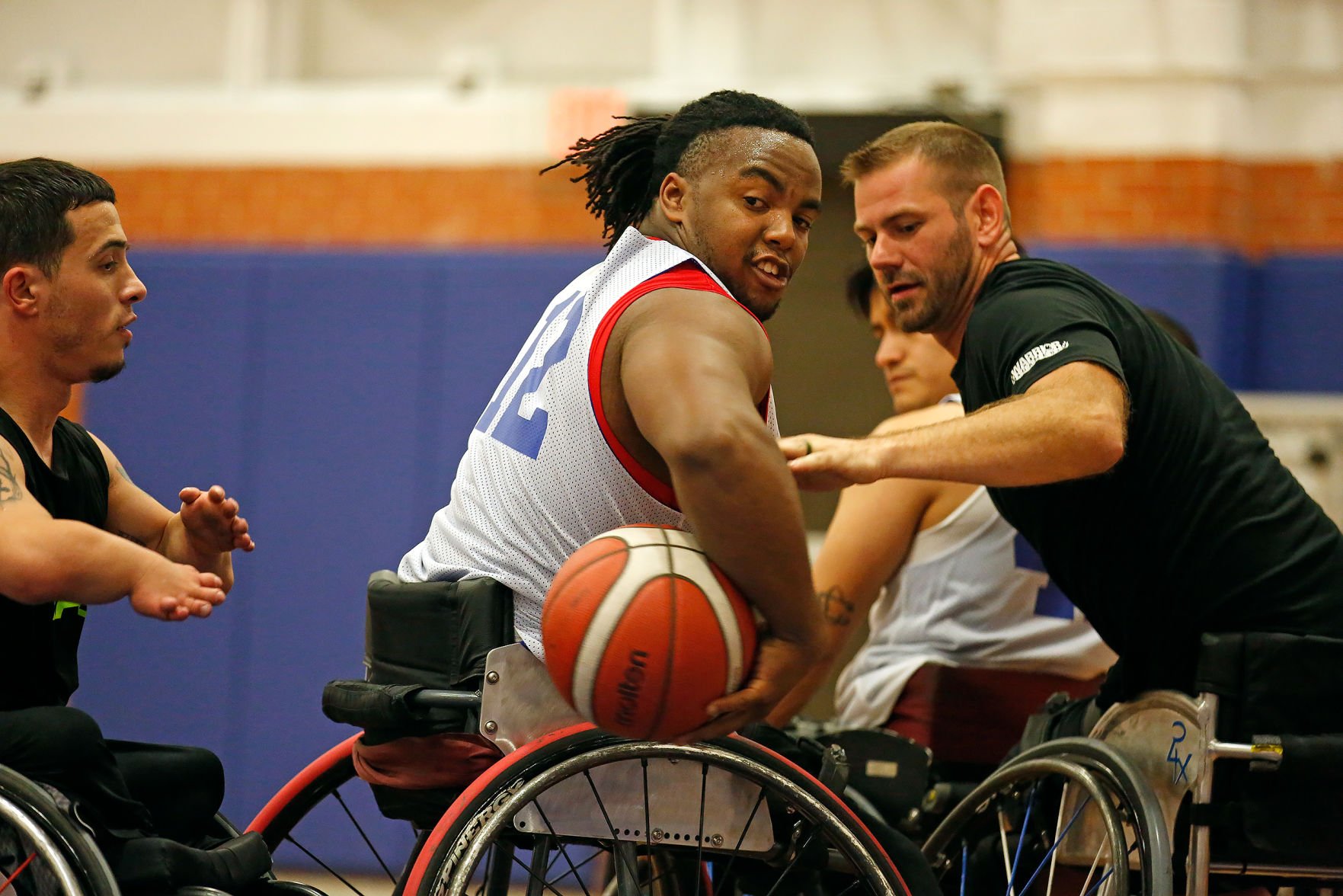 Movin’ Mavs freshman Carrington Marendes passes behind his back during a practice game Oct. 23 at the Physical Education Building. Marendes competed with the TIRR Memorial Hermann Junior Hotwheels before coming to UTA 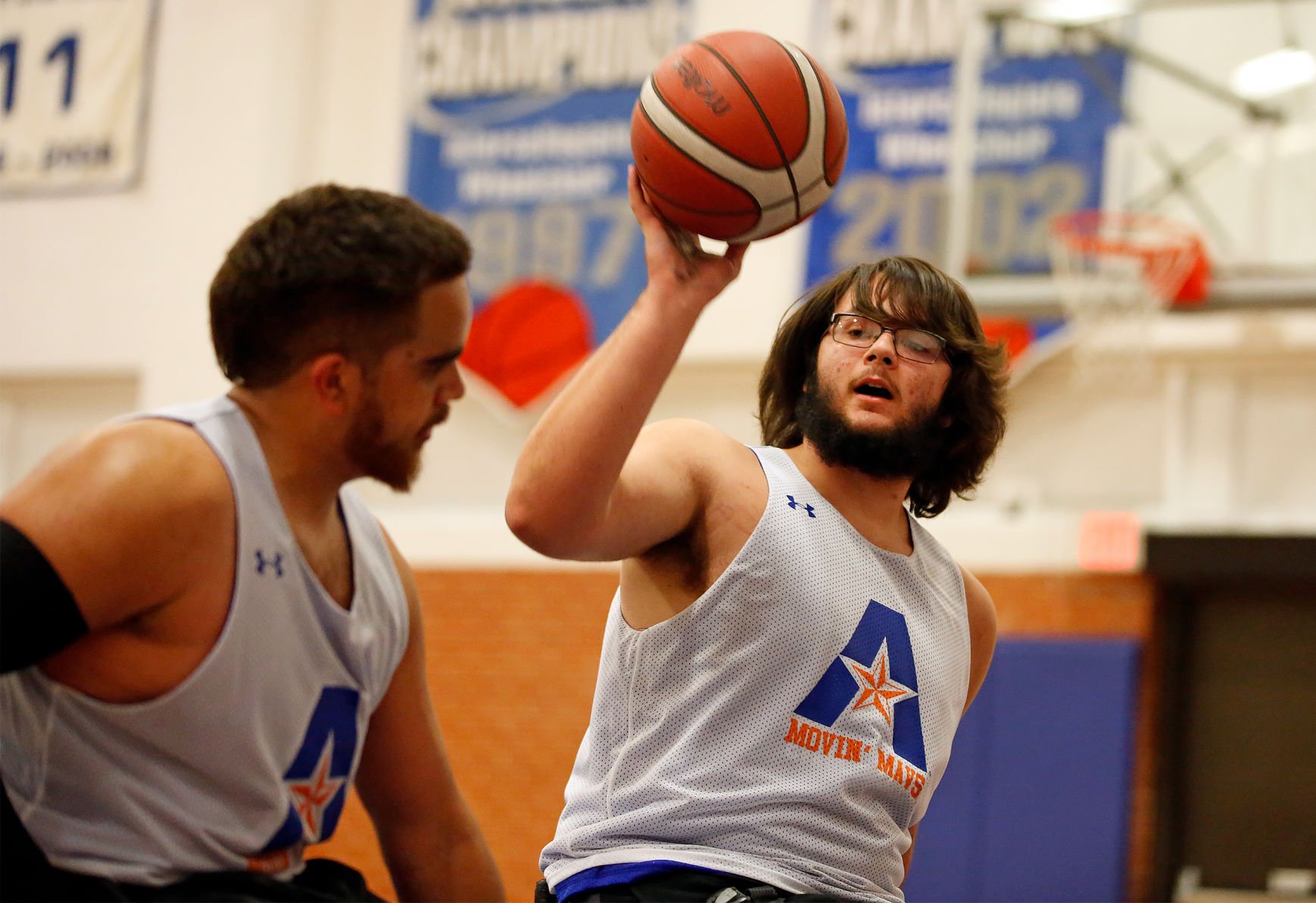 Movin’ Mavs freshman Garrett Castillo grabs a rebound during a practice game Oct. 23 at the Physical Education Building. Castillo is one of the newest players on the Movin’ Mavs.

Movin’ Mavs freshman Carrington Marendes passes behind his back during a practice game Oct. 23 at the Physical Education Building. Marendes competed with the TIRR Memorial Hermann Junior Hotwheels before coming to UTA

Movin’ Mavs freshman Garrett Castillo grabs a rebound during a practice game Oct. 23 at the Physical Education Building. Castillo is one of the newest players on the Movin’ Mavs.

Despite being about 250 miles away from UTA, the city of Houston has an important connection with the Movin’ Mavs.

The Houston area is known as a recruiting hotbed for wheelchair basketball. Under head coach Doug Garner, the Movin’ Mavs have heavily recruited players from the area.

This season, the Movin’ Mavs have six players on the roster from Houston: freshmen Carrington Marendes and Garrett Castillo, juniors Ramiro Cortez and Bryce Cruz, senior Fabian Romo and graduate student Antoine Gray. The relationship between the players has been notable.

“They’ve got that connection because they played before,” Garner said. “Fabian plays really well with Bryce. Garrett and Carrington play really well together. They take pride, and they bring the others along.”

Gray said there is a certain pride about being from Houston, which is why there is usually an automatic connection between players from the area on the team.

As a way to make the team better, Garner said he puts all-Houston lineups together during scrimmages because of the chemistry that players from the Space City have created with each other over time.

“Seeing them working together for the good of the team, it’s encouraged now,” Garner said. “It’s all good for the team and the program.”

Many of the team’s Houston-based players came up through the TIRR Memorial Hermann Junior Hotwheels. The community of players and coaches involved with the junior wheelchair basketball program has helped establish young players like Castillo and Marendes.

“I give a lot of credit to the program in Houston,” Castillo said. “I feel like they shaped me, Carrington, Fabian, mostly everybody out there, to be the player they are today.”

Marendes said the program encourages players to partake in adaptive sports and develops skills for those that want to devote their time toward a collegiate career in wheelchair basketball.

“TIRR has just made this huge commitment to disability,” Garner said. “They help sponsor programs, they help find facilities.”

Cortez said he also credits the Junior Hotwheels for the development of his skills in wheelchair basketball.

“They taught me how to move a chair, how to shoot a ball, what drills to do to get faster [and] which muscles to work on,” Cortez said.

Garner said earning the overall respect of the wheelchair basketball community in Houston has made for steady success in recruiting players to UTA.

“We care about their success, coming in as athletes, and as students,” Garner said. “We want them to finish school and get jobs, go back to the community, be leaders.”