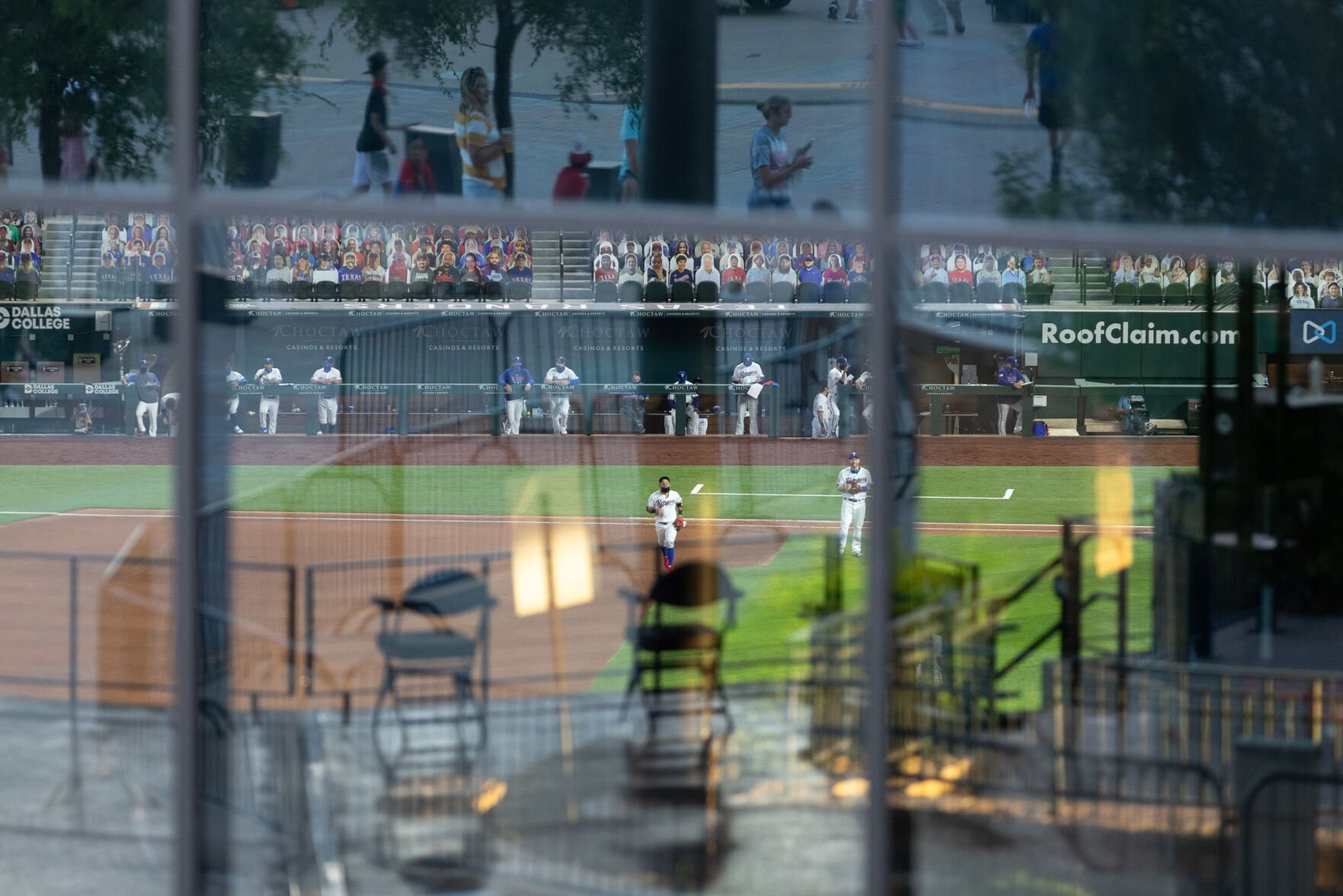 Members of the Texas Rangers can be seen inside Globe Life Field as a reflection shows fans outside during opening day July 24 at Texas Live in Arlington. Major League Baseball decided to open the season without fans to prevent the spread of COVID-19. 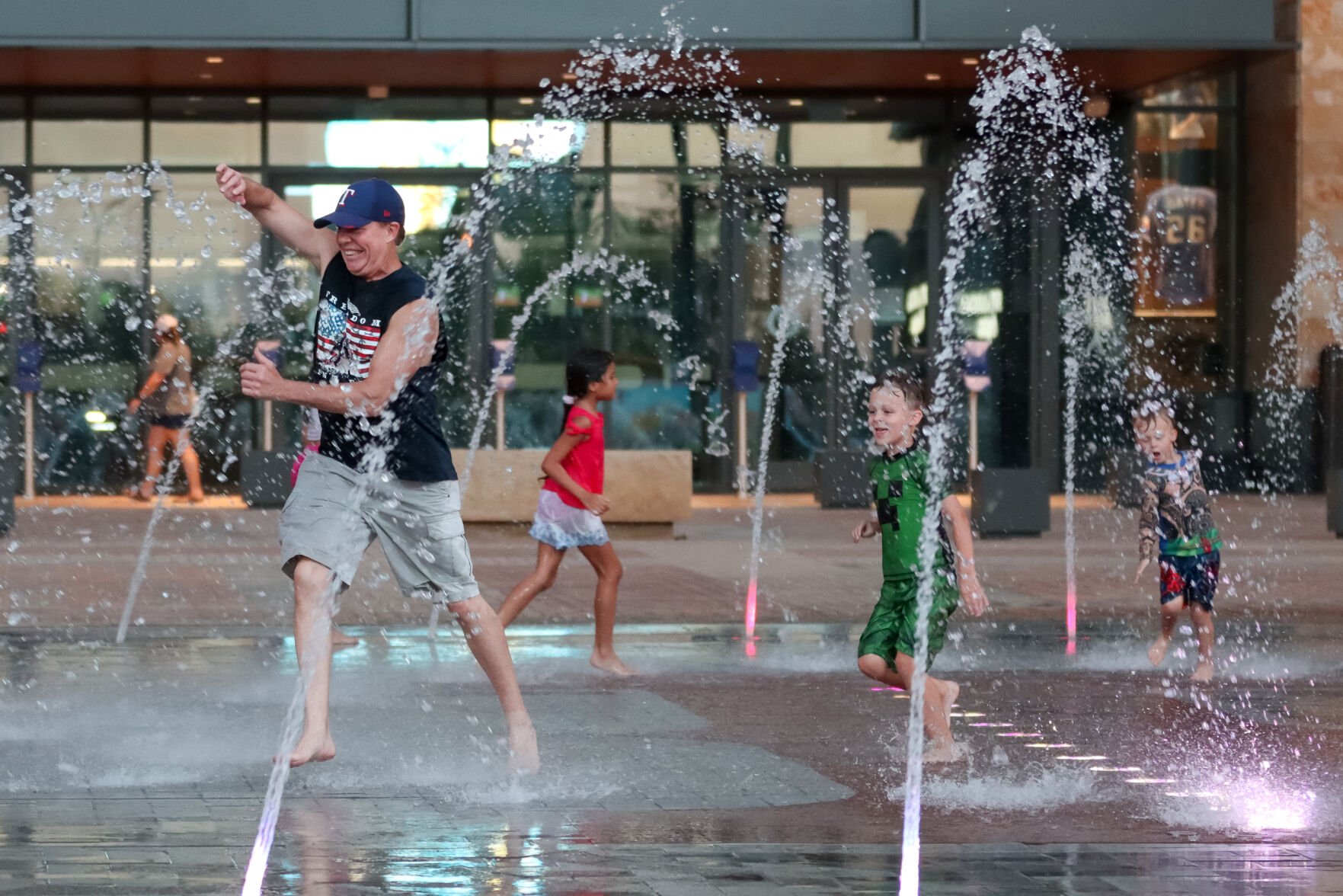 Arlington resident Darrell Stracener, left, leads his grandchildren Liam Whitehead, center, and Levi Whitehead through a fountain outside Globe Life Field during opening day of the Texas Rangers on July 24 in Arlington. Stracener said his grandkids had fun running through the water.

The first pitch at Globe Life Field was as clear as day.

Instead of 40,000 cheering fans, the sound of a 92 mph fastball hitting Robinson Chirinos’ catcher’s mitt echoed throughout the ballpark as the umpire called strike one.

Maybe it was the manufactured crowd noises, the absence of fans or the cardboard cutouts taking their place in the lower deck, but this was it. This is baseball in 2020.

It has been less than a year since the Texas Rangers bid farewell to Globe Life Park in hopes of giving Globe Life Field its Opening Day debut March 31, but those plans were scrapped when COVID-19 delayed the start of the season.

However, after nearly three years of construction and four months of delay, the Rangers saw an Opening Day like no other Friday evening against the Colorado Rockies.

There wasn’t a big hoopla; the smell of popcorn and hotdogs didn’t fill the air, and it wasn’t scorching hot.

The benefit of an indoor ballpark? It was 72 degrees. In July. In Texas.

Usually, you might see an American flag stretched across the outfield on Opening Day, but given everything that’s going on throughout the nation — the COVID-19 pandemic and ongoing protests against racial injustice — there were some changes.

Prior to the national anthem, a black ribbon was stretched around home plate toward the basepaths. United, each team gathered behind the ribbon and held it up while a Black Lives Matter tribute video played. Some kneeled, most didn’t, but then everyone stood for the national anthem.

“Just because some guys may be standing or kneeling; we're all unified in that clubhouse,” Rangers manager Chris Woodward said before the game. “We all believe in each other. We care about each other. We love each other. And I think that's a good representation for what we should be as a society, in my opinion.”

Woodward emphasized that unity within the clubhouse, making sure to be respectful of differing beliefs on the team.

“It’s a tough conversation to have with a group of guys that are passionate, a lot of times on both sides, but nobody denies the fact that we want racial equality in this country,” he said.

The game itself was full of firsts — the first batter, the first strikeout, the first hit. Gov. Greg Abbott added to that list, virtually throwing out the ceremonial first pitch from the video board.

Second baseman Rougned Odor drove in the first run at Globe Life Field. It was his lone RBI that led the Rangers to victory in their new home.

Though you could hear cheering “fans” when outfielder Danny Santana scored the game-winning run, the real atmosphere was around the corner at Texas Live.

Fans filled the venue for Opening Day, cheering loudly with eyes glued to the TVs around them.

Rangers shortstop Elvis Andrus said it's going to be tough for him to focus this season without fans, but he made it a point to imagine and believe that fans are cheering in the stands.

“Opening Day is always going to be special. For me, it is,” Andrus said. “But this year with no fans; I think [the fans] make Opening Day cool.”

While it wasn’t the most traditional start to a season, catching the series at Texas Live gave some a chance to get a look at the new ballpark, pose with some of the Rangers statues and run through the plaza’s water fountain.

“I prefer watching a live game,” Rowlett resident Julio Barrios said. “But I love baseball, so I’ll watch it at home or wherever.”