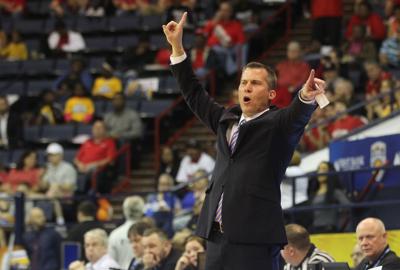 Scott Cross took the stairs one last time on his way out of College Park Center — and his career as UTA men’s basketball head coach.

Just a couple of weeks after the men’s basketball season came to a close, the community was sent into shock on Monday after UTA Athletics announced Cross was fired.

Under the direction of Cross, the men’s basketball team was led to five postseason berths and 225 wins throughout 12 seasons. He compiled 72 wins over a three-season stretch, becoming the winningest coach in program history and was one month away from his 12-year anniversary as head coach.

The men’s basketball team capped off its season with a loss in the Sun Belt Championship title game to Georgia State University. Following the conference tournament, as always at the end of the season, Athletics Director Jim Baker met with Cross to discuss the year at hand and the future of the program.

“I took what [Cross] said and took a couple weeks to think about it, talk to the president and just really looked at the options and where we were going,” Baker said.

Cross had two years left on his contract with UTA and Baker said a settlement is currently being negotiated for a fair deal.

In his decision to fire Cross, Baker said he was led by the fact that they had two different outlooks on where they wanted the basketball program to go and cited the team’s inability to break into the NCAA tournament over the past couple of years.

“At this point in time, I just felt that we needed to make a change and get new leadership and try and get us to the dance,” Baker said. “That’s the bottom line.”

The community lashed out because of Baker’s decision, taking their anger and frustration to social media. Baker said because Cross was a popular coach, he knew what was coming and he knew the type of feedback he was going to receive.

“He has his people who are in his court and that’s gonna happen. People are gonna do what they’re gonna do, there’s no controlling that,” Baker said. “If It’s all about one person, then it’s not about the university and I think this university is bigger than one person, no matter who that is.”

Alumnus Jorge Bilbao said Baker’s decision to let Cross go because he wasn’t satisfied with his performance and the team’s performance on the court is contradicting.

“I know the president and the athletic director, they always aspire to reach greater heights and they try to get the program as far as possible, but that’s something that Coach Cross has been doing ever since he took the job,” Bilbao said.

Bilbao said the situation spread to Poland, where he plays professional ball, and to his home country of Spain. Some of his former teammates, coaches and friends have reached out to him saying, ‘What the heck is going on at UTA?’

“There’s tough bumps along the road and things like this happen and it’s already done,” Bilbao said. “There’s nothing more we can do, we can only control how we react to it.”

Reminiscing on his time at UTA, Bilbao credited Cross with making him the basketball player and person he is today. He said it sucks to see his favorite coach go and it’s a huge loss, not only for the basketball team, but for the institution as well.

“The program is what it is today thanks to him, his daily hard work, the way he does things, because it’s easy to do things the wrong way in college basketball,” Bilbao said. “He’s someone that everyone loved and respected around UTA, around DFW and around the country. Everywhere we went, he was a very well-respected coach.”

During his time as head coach, Cross was widely known for ‘take the stairs’ and ‘tough guys don’t smile’ and that’s what Bilbao said he admired most.

“That was his trademark — being the tough guy, working hard and putting everything in God’s hands,” Bilbao said. “One university got really lucky [Monday] and it definitely wasn’t Arlington.”

Prior to receiving the news, Bilbao said Cross was talking to him about how much he missed coaching him and having him on his team. Now that he’s been fired, it’s a bit emotional for him.

“That was just a few days ago and now he’s not at UTA anymore,” Bilbao said. “In that sense, you can see how crazy life can get sometimes.”

Bilbao said, because Cross is a great coach, he believes he will receive plenty of offers from around the season.

“Coach Cross has worked for absolutely everything he’s done so far and he will keep doing it,” Bilbao said. “He’s a great coach and everyone in the nation knows it and I’m sure that he will have plenty of offers.”

Baker began a national search for a new head coach Monday night. He said the job has received many inquiries and he will make his decision next week.

With the majority of the team graduating, Baker said he talked to the returning players about what they’re wanting in a head coach. He said once the players meet with the new head coach, if it’s not a right fit for anyone and they want to be released from the team, they will be granted that release.

“This is a very desirable job and we have a lot of inquiries and a lot of interest, so we’re gonna have a really good pool of people,” Baker said. “We want it to be a right fit, but it’s not gonna be a Scott Cross.”

Baker said he’s looking for someone who comes from a winning program, preferably an assistant from a power-five conference or someone who’s been successful at the Division I level. He said the process will move fast so the new head coach will have a chance to sign a few players of his own before signing day ends.

With the end of an era, Bilbao said it is going to be a tough task for someone to fill Cross’ shoes.

“I don’t know what the future of the program will be,” Bilbao said. “It will be really difficult in my opinion, giving the UTA situation, to get something close to what Coach Cross has done with the program in the last couple of years.”

Cross released a statement Monday night about his dismissal, where he expressed pride in the program’s accomplishments over the years and his thanks to the UTA community.

“I am extremely proud of what we have accomplished in my time as head coach of my alma mater,” Cross said. “I am most grateful for the long bus rides, the intense practices, and the relationships that have been built with our players, coaches, staff, fans, and alumni during our time at UTA.”

Scott Cross took the stairs one last time on his way out of College Park Center—and his career as UTA men’s basketball head coach.

A settlement has been reached between former head coach Scott Cross and the university, Cross’ attorney Joey McCutchen said.