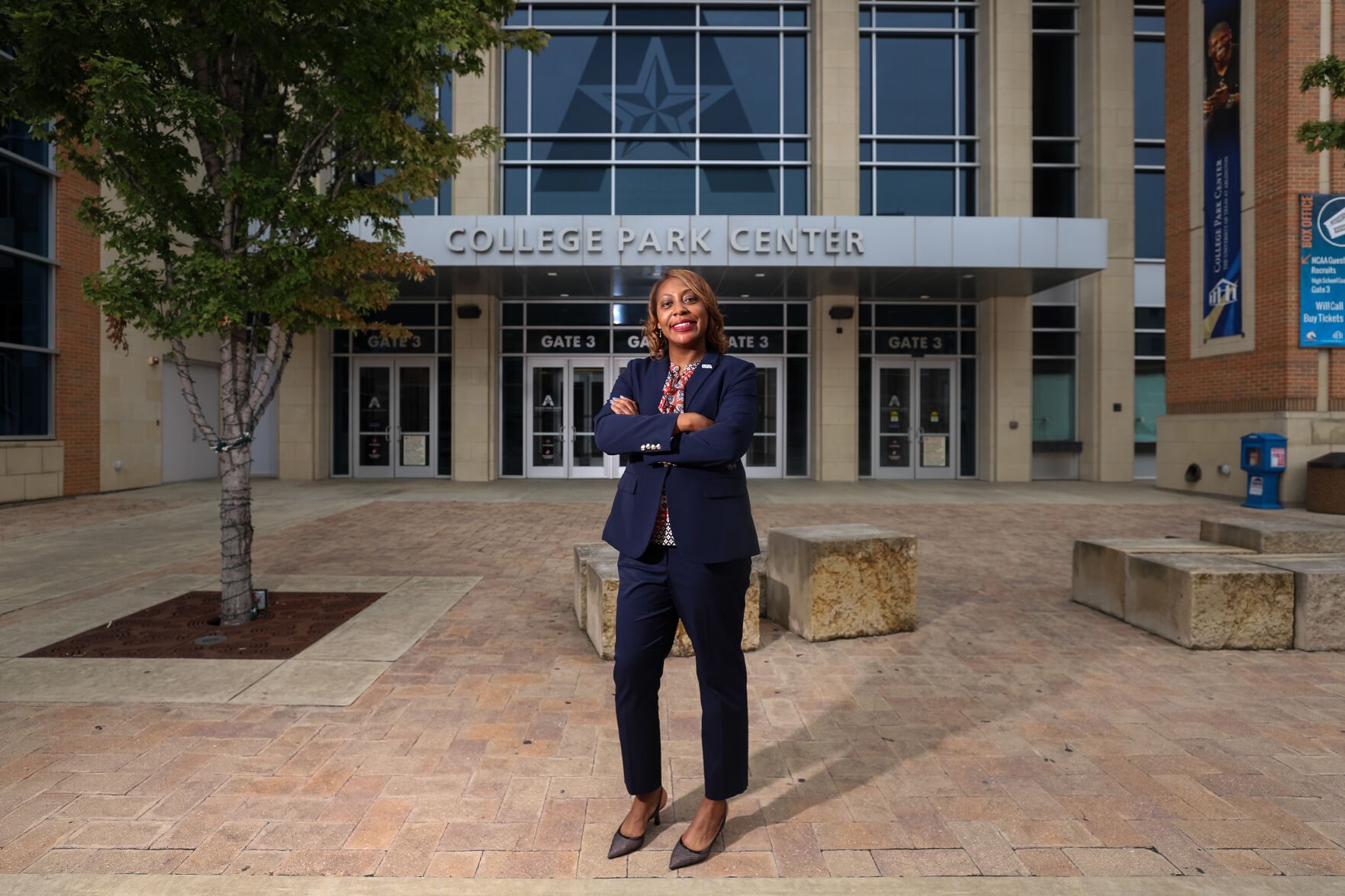 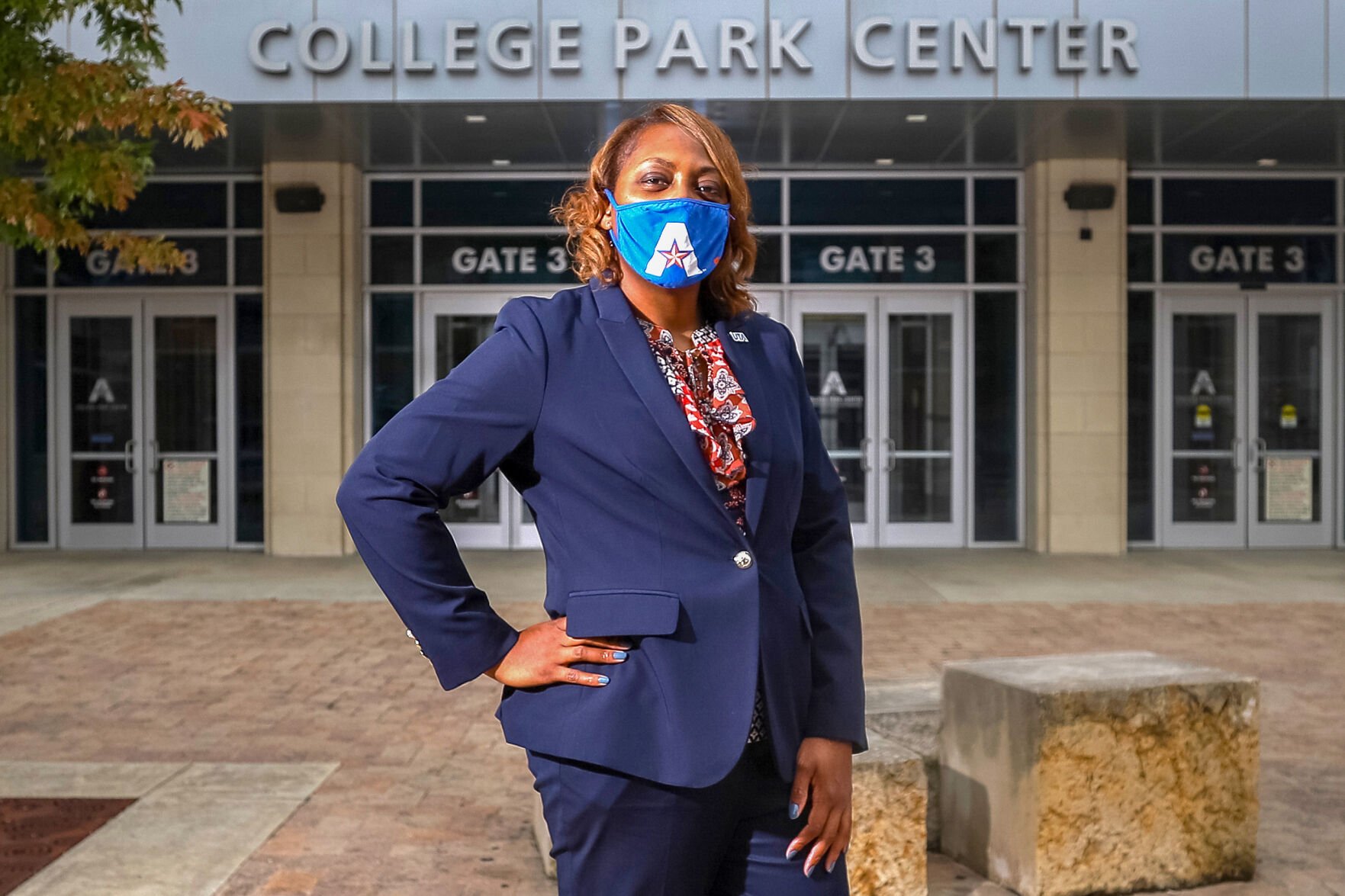 Shereka Wright, women’s basketball head coach, in front of College Park Center on Sept. 10. Wright was an All-American at Purdue University before being drafted 13th overall in the 2004 WNBA Draft.

Shereka Wright, women’s basketball head coach, in front of College Park Center on Sept. 10. Wright was an All-American at Purdue University before being drafted 13th overall in the 2004 WNBA Draft.

When Shereka Wright was chosen to lead the women’s basketball program at UTA, her career came full circle.

“We’re bringing a Texas girl home,” athletic director Jim Baker said during Wright’s introductory press conference last Thursday. “You can look at her, where she’s been and what she’s done, she’s been working for this day her whole career.”

Before Wright made her return to the Lone Star State, she coached for seven years in the Southeastern Conference, learning from Stephanie White at Vanderbilt University and Kristy Curry at the University of Alabama.

Curry played a large role in bringing Wright into the coaching ranks, offering her an assistant coaching job at Texas Tech University in 2006. Before that, Curry served as Wright’s head coach during her playing days at Purdue University from 2000 to 2004.

Together, Wright and Curry guided the Boilermakers to the NCAA Tournament Final Four in 2001. They also led Purdue to the tournament’s Elite Eight in 2003 and the Sweet 16 in 2004.

Curry, who has been coaching for 32 years, said she has known Wright since she was 16 and living in Copperas Cove, Texas.

Wright’s impact on Curry was so great that she helped the current Alabama coach name her second child when she and her husband, Kelly Curry, were trying to decide names.

Curry said Wright has an ability to relate to people, and her love for the game is as great as anyone she has ever been around.

“When she was stepping away from the WNBA, I just happened to get the Texas Tech job at the same time,” Curry said. “[I] knew that there was no one that had more respect in the state of Texas in the game of basketball.”

Wright started making a name for herself when she impressed Skip Townsend, now a Texas High School Basketball Hall of Famer, in junior high.

“Her junior high team scored 100 points in eighth grade several times against pretty good teams,” Townsend said. “There were a couple of girls in that class that went [Division-I] in basketball, but she was the leader of that team ... We knew what we had in junior high, that’s when we really found out who she was.”

By the end of her high school career, Wright had accumulated 3,269 points, 1,148 rebounds and 220 blocks. She was the fourth Texan to record 3,000 points in a career and was named Gatorade and Rawlings Player of the Year in 2000.

Wright’s decorated high school resume propelled her to an All-American career at Purdue. She went on to become the 13th pick in the 2004 WNBA Draft, where she was selected by the Detroit Shock before being traded to the Phoenix Mercury on the same night.

Her playing career came to an end in 2006 after she suffered a left Achilles tendon tear. She made her mark on the game and acquired many accolades, including being inducted into the Texas High School Basketball Hall of Fame in 2011 and the Purdue Hall of Fame in 2020.

Wright said her playing career taught her that the game of basketball is about preparing for the next play. She said she wants to instill that mentality in her new team.

“We turn the ball over, we take a bad shot. Whatever happens, it’s the next play,” Wright said. “I just want to get in and get my hands on to develop them, see where they are [and] continue to improve their strengths.”

Junior guard Terryn Milton said she was excited to have a new coach after what felt like a long waiting process since former head coach Krista Gerlich departed to Texas Tech. The Owasso, Oklahoma, native said building trust with Wright will be important for the Lady Mavericks as they acclimate to her coaching style.

“If it’s all out of love, then she can push us however hard she wants to push us, and we’ll respond to it every single time,” Milton said.

Wright is inheriting a team with a strong junior class. Six of UTA’s juniors were on the 2018-19 roster that clinched a share of the regular season Sun Belt Conference title.

Curry said she believes her former All-American forward will have no trouble adjusting her system to play to her new team’s strengths.

“One of Shereka’s biggest strengths is she’s been a part of a lot of different teams as a player and a coach, and she’s seen those around her adapt to personnel,” Curry said. “I know that she’ll make that team her No. 1 priority.”