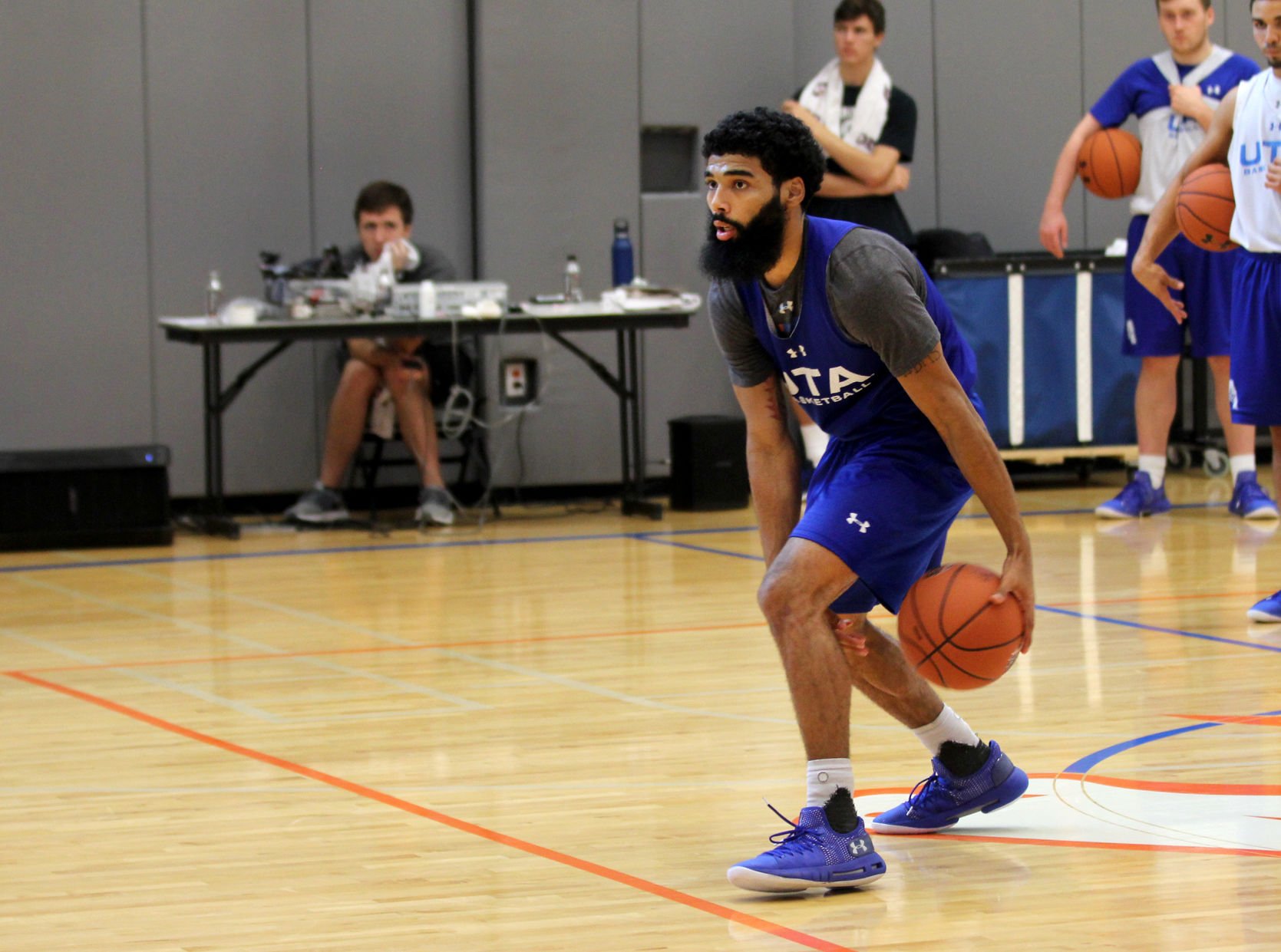 Junior guard Brian Warren dribbles down the court during a practice Oct. 25 at the  College Park Center practice court. The team practiced various skill in preparation for the beginning of basketball season. 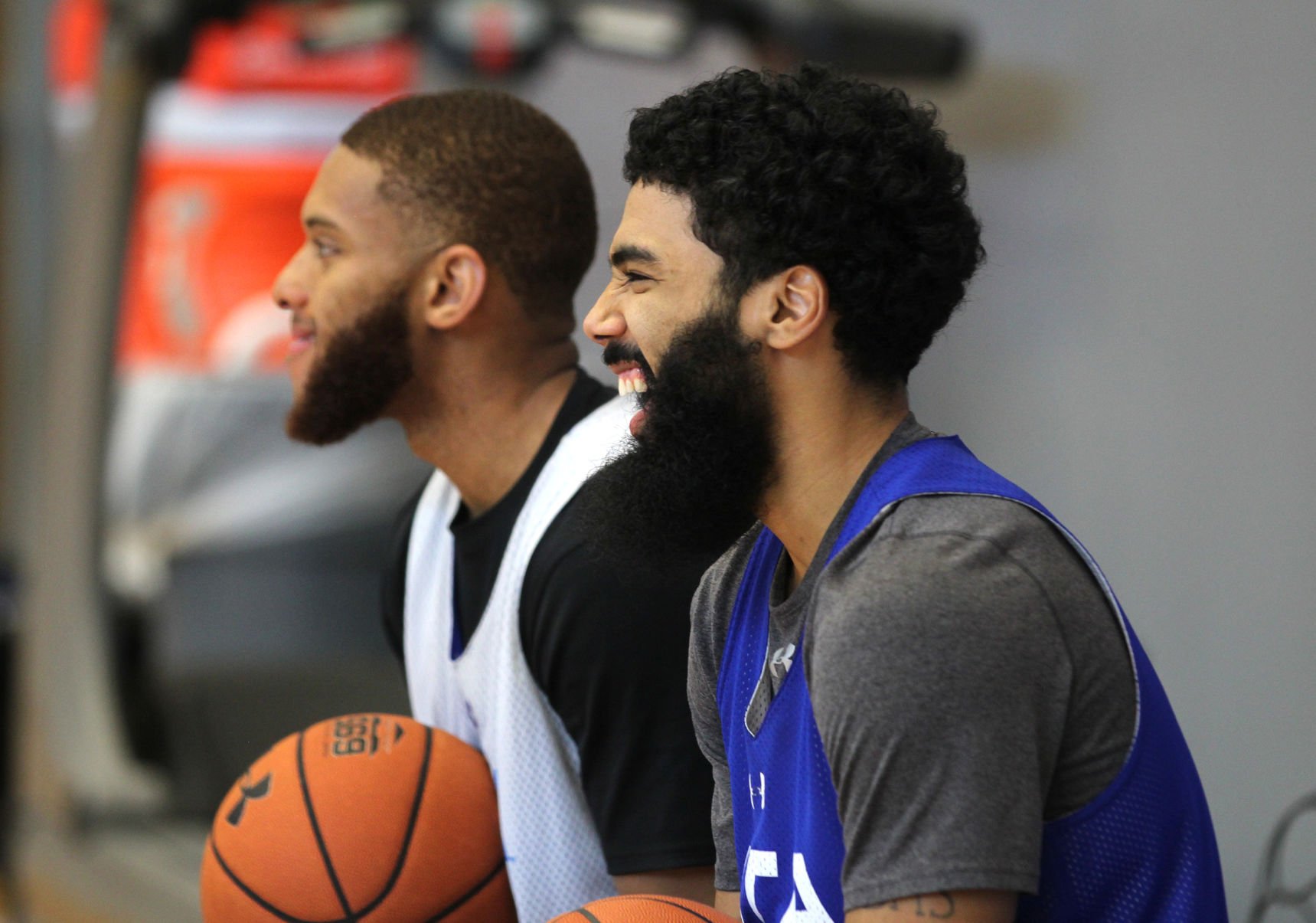 Junior guard Brian Warren, right, laughs next to junior guard Edric Dennis during a break in the team’s practice Oct. 25 in the College Park Center.

Junior guard Brian Warren dribbles down the court during a practice Oct. 25 at the  College Park Center practice court. The team practiced various skill in preparation for the beginning of basketball season.

Junior guard Brian Warren, right, laughs next to junior guard Edric Dennis during a break in the team’s practice Oct. 25 in the College Park Center.

After an offseason full of changes, the end of an era and the beginning of a new one, the men’s basketball team is looking toward a fresh start for the 2018-19 season.

Over the offseason, the program saw the departure of former head coach Scott Cross, his staff and eight seniors, including the dynamic duo of Kevin Hervey and Erick Neal.

But this season is not about what happened in the past. Instead, it’s time to move forward and start a new chapter, head coach Chris Ogden said.

“It’s up to us to write our own story,” Ogden said. “We can be as good as we want to be, and a lot of that is just coming together as a team.” 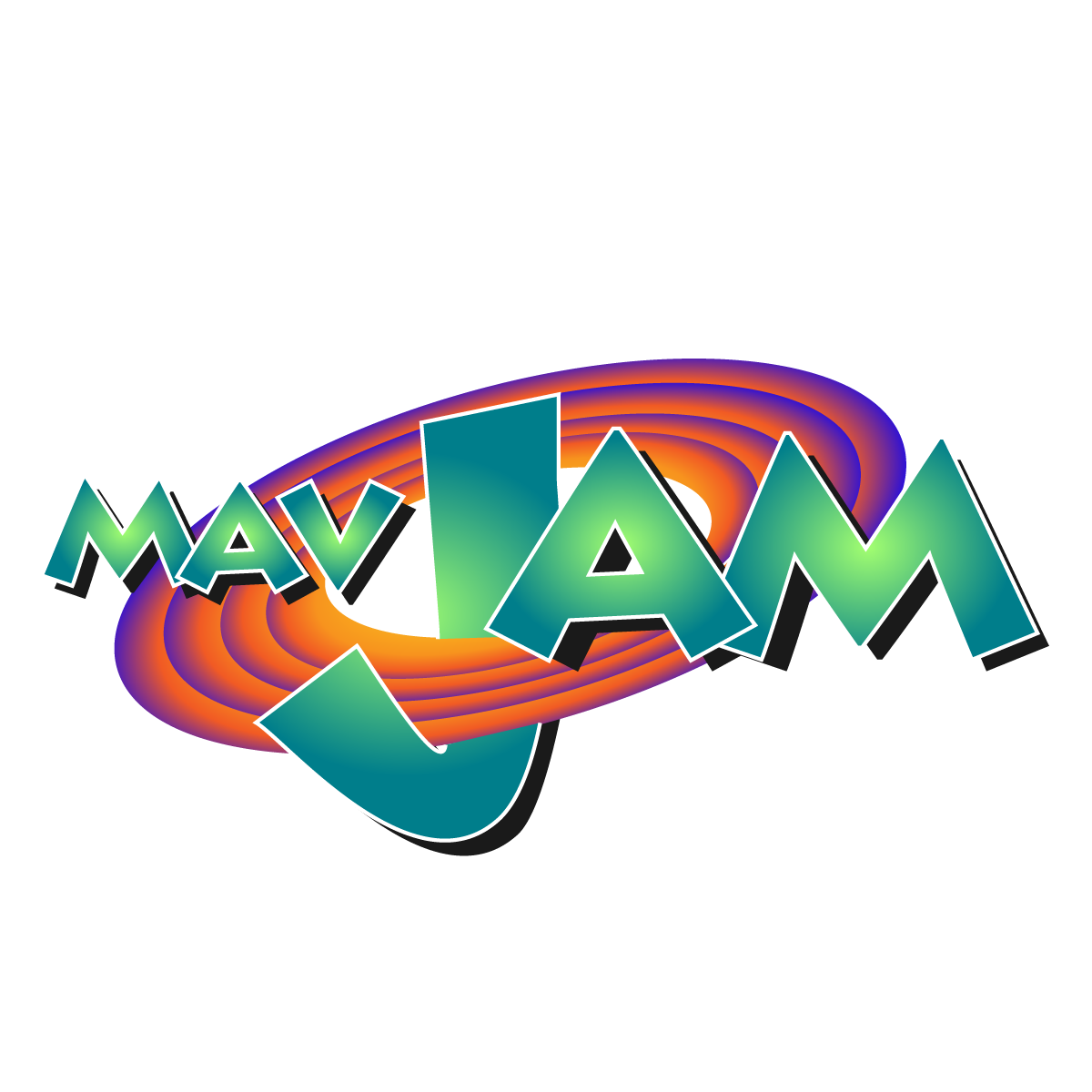 Returning six and welcoming nine, the team is fairly young. Only one of the returners, junior DJ Bryant, saw minutes in all 34 games last season.

Bryant said for the past few years he has led the team but in different roles. It was more behind the scenes and leading by example, but now he feels he needs to be more of a vocal lead for the team.

“At some point during the season we’re going to hit adversity,” Bryant said. “Nobody’s ever played this conference before, so that’s where I kind of feel like I need to take a lot of pride on and just be there to lead guys.”

With all these changes, some may say this is a rebuilding year, but Ogden doesn’t see it as different from any other.

Whether you lose one senior or eight, every year is a rebuilding year, he said.

This year is a foundation year. For the culture, for the passion they want to play with and for the program moving forward, he said.

In his first year as head coach, Ogden said there are certainly some nerves that come with it.

“Until you call your first timeout, you’ve never called a timeout,” Ogden said. “Anybody who’s ready to compete has some nerves on some level.”

From recruiting players to recruiting his staff, Ogden said he was looking for people that compliment each other but aren’t cut the same way.

“I wanted people from different boxes with different experiences and different ways to think about things,” he said. “It’s like a people puzzle, you’re never done adding to that people puzzle.”

With everyone he has now, Ogden said it’s the energy, enthusiasm and the relationships they are forming off the court that has the potential to make this team special.

Aside from the passion they put into the game, Ogden said there are a few lessons the Mavericks need to learn as the season rolls around.

First, they have to be ready every night and pay the price before those games.

Second, within games, they have to learn that there are ebbs and flows.

Lastly, they have to learn that they are never out of the picture; there’s always a way.

While games against Gonzaga University, UT-Austin and the University of Indiana can be exciting, the first game is what Bryant looks forward to the most ­— after only playing his teammates for the past few months.

“We’re ready to go out and actually play somebody,” Bryant said.

The team tips off its season against UT-Tyler on Nov. 6 at College Park Center. It’ll be the program’s first stop on the road to the NCAA tournament, a goal Ogden isn’t shy to talk about.

After the men’s basketball team fell one game short of breaking into the tournament, leading to the firing of Cross and appointment of Ogden, many fans and commentators had doubts whether UTA could ever reach the Big Dance or become the “Gonzaga of the south.”

But Odgen continues to believe in UTA.

“Why not [UTA]? Why everybody else? What do they deserve? What have they done to deserve it over us?” he said. “To hell with everybody else. We are UTA, why don’t we deserve it?”

But to get to the level Ogden wants to be at, as a community, everyone has to be in it together, Ogden said.

It’s the team’s job to give the community something that they’re proud of, he said, but the community, the faculty, staff and students need to know that they are a huge part of the journey.