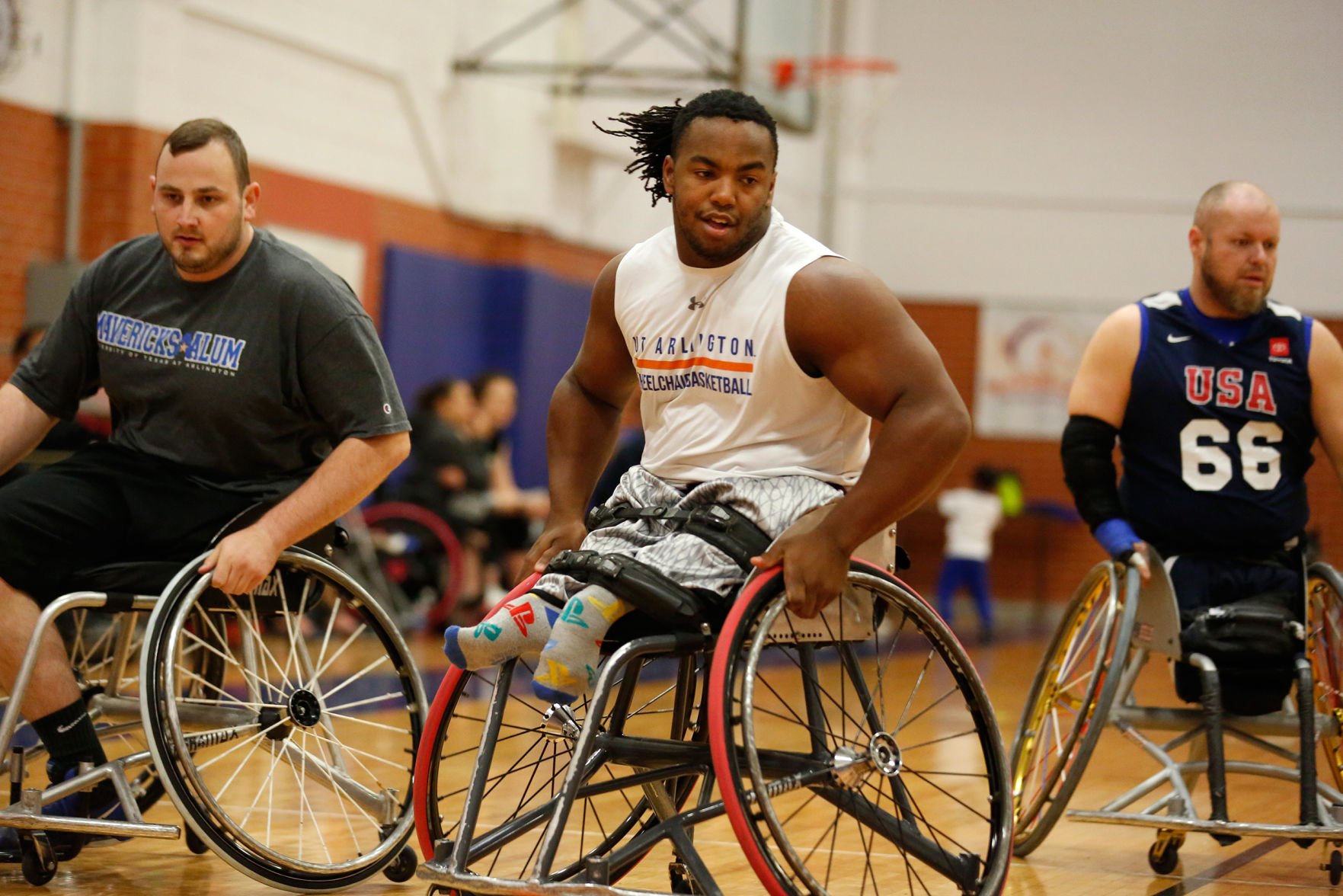 Movin' Mavs freshman Carrington Marendes moves down the court during a scrimmage Oct. 16 at the Physical Education Building. "I just want to bring that energy — and bring that entertainment to the game," Marendes said. 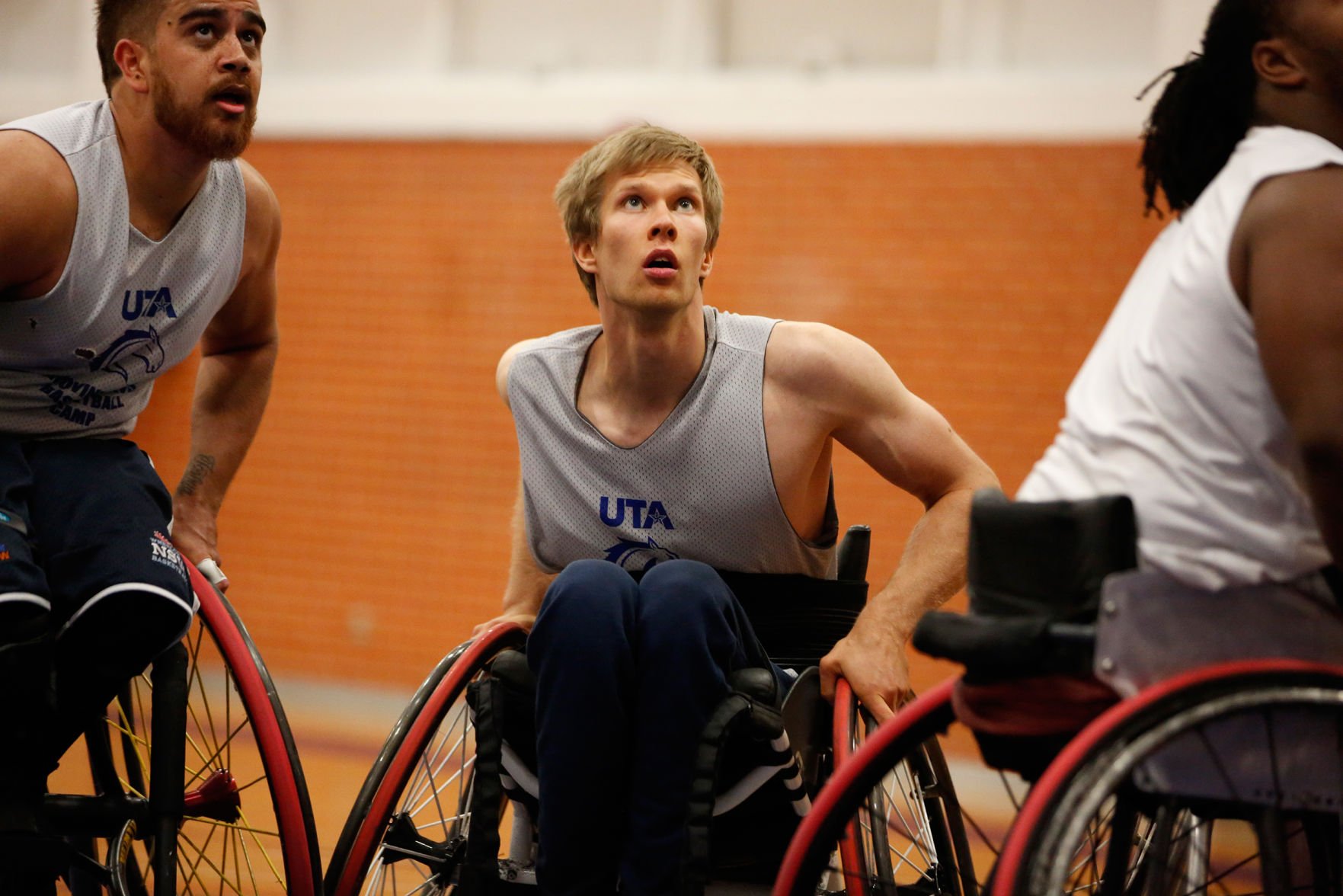 Topias Tyni, Movin' Mavs graduate student, looks up at the basket during a scrimmage Oct. 16 at the Physical Education Building. The Finnish graduate student is one of three newcomers to this year's team/

Movin' Mavs freshman Carrington Marendes moves down the court during a scrimmage Oct. 16 at the Physical Education Building. "I just want to bring that energy — and bring that entertainment to the game," Marendes said.

Topias Tyni, Movin' Mavs graduate student, looks up at the basket during a scrimmage Oct. 16 at the Physical Education Building. The Finnish graduate student is one of three newcomers to this year's team/

Three new freshmen are set to debut with the Movin’ Mavs this season, bringing several lineup options to the team.

All it took was one visit to campus for Marendes to fall in love with UTA.

“They came from a program that was really competitive and they pushed them to be as good as they could be,” senior Adryan Powell said.

Marendes said his ability to be versatile on the court is one of his biggest strengths.

Rather than forcing plays, Marendes said he has learned to be patient and let the game come to him.

Head coach Doug Garner said he believes Marendes will have a great career at UTA because of his strong work ethic and the high energy he brings to the team.

“If it’s me scoring, if it’s me playing defense, getting rebounds, screaming and hollering, whatever I need to do to get the team going,” Marendes said. “I’m just a hype man.”

Joining his former Junior Hotwheels teammate, Castillo will be the newest high-pointer for the Movin’ Mavs.

Garner said Castillo has a lot of potential to contribute to the team once he adjusts to collegiate competition.

“I’m not the best on-ball defender, but I’m definitely one of the best interior defenders when it comes to being in the paint,” Castillo said.

Graduate student Antoine Gray said when Castillo is down low in the paint, opponents trying to guard him will have a difficult time stopping his offensive game.

“Once he gets down low, there’s nothing anybody can do,” Gray said.

Castillo has been compared to former Movin’ Mav and NWBA Hall of Famer, Jason Van Beek. Castillo said the most complimentary comparison came from a member of the Dallas Wheelchair Mavericks.

“If I’m getting compared as a freshman to him now, I feel like I’m doing something right,” Castillo said.

Garner said he believes Castillo has enough talent to make the U.S. Men’s Junior National Team and will become a strong asset in the future for the program.

“By the time some of our high-pointers graduate, he’s going to be a real force,” Garner said.

Tyni comes from Finland, where wheelchair basketball isn’t as structured as it is in the U.S. Tyni said he is looking forward to exploring all of UTA’s resources ­— some that aren’t necessarily provided in his home country.

Back home, Tyni played as a high-pointer. Now that he’s at UTA, he’ll be playing as a low-pointer.

“In Finland, I had to play quite [a] different role because there’s no big players,” Tyni said. “So here, I can play the role that belongs to me.”

As Tyni works to earn playing time this season, he said the increase in experience will help him get acclimated to the fast-paced game that is collegiate wheelchair basketball.

Gray said Tyni has fit in well with the team’s offensive system.

“He sets a hell of a screen, good picks [and] seals,” Gray said.

While Tyni settles into the fundamentals of his new role, Garner said he is optimistic of Tyni’s ability to develop into a productive player.

“By the end of the year, he’s going to be a really good low-pointer,” Garner said.