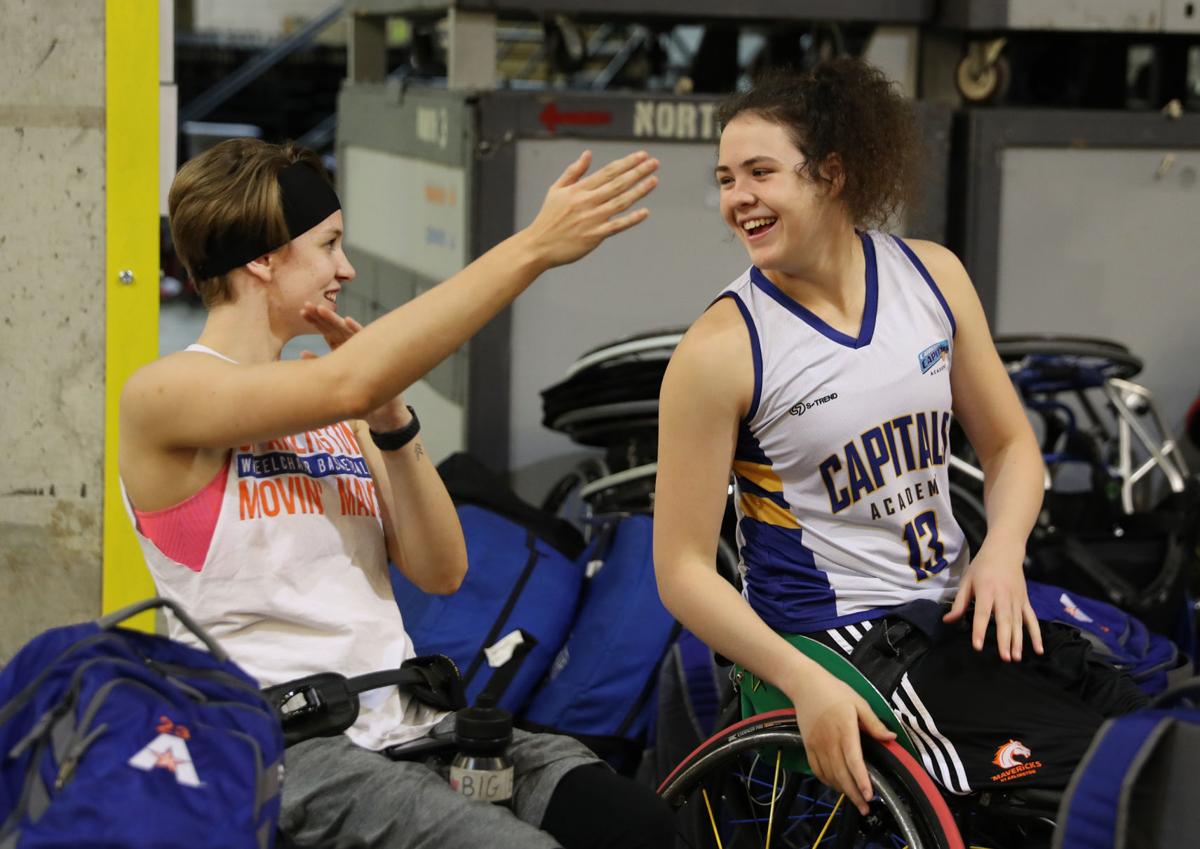 Lady Movin Mavs alumna Abby Dunkin, left, and sophomore Annabelle Lindsay joke with each other before heading onto the court for a team shootaround March 13 at State Farm Center in Champaign, Illinois. 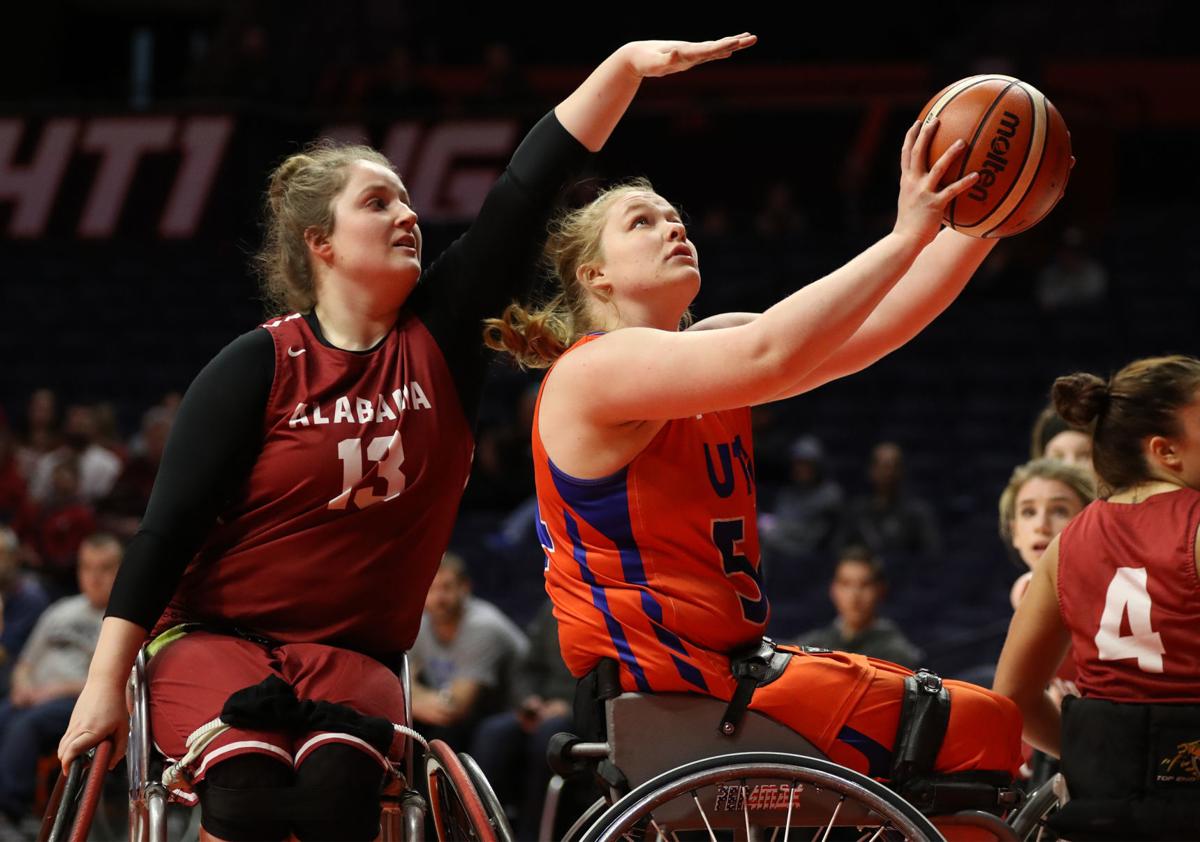 Lady Movin' Mavs alumna Rose Hollermann prepares to put up a shot during a game against the University of Alabama on March 16 at the State Farm Center in Champaign, Illinois. 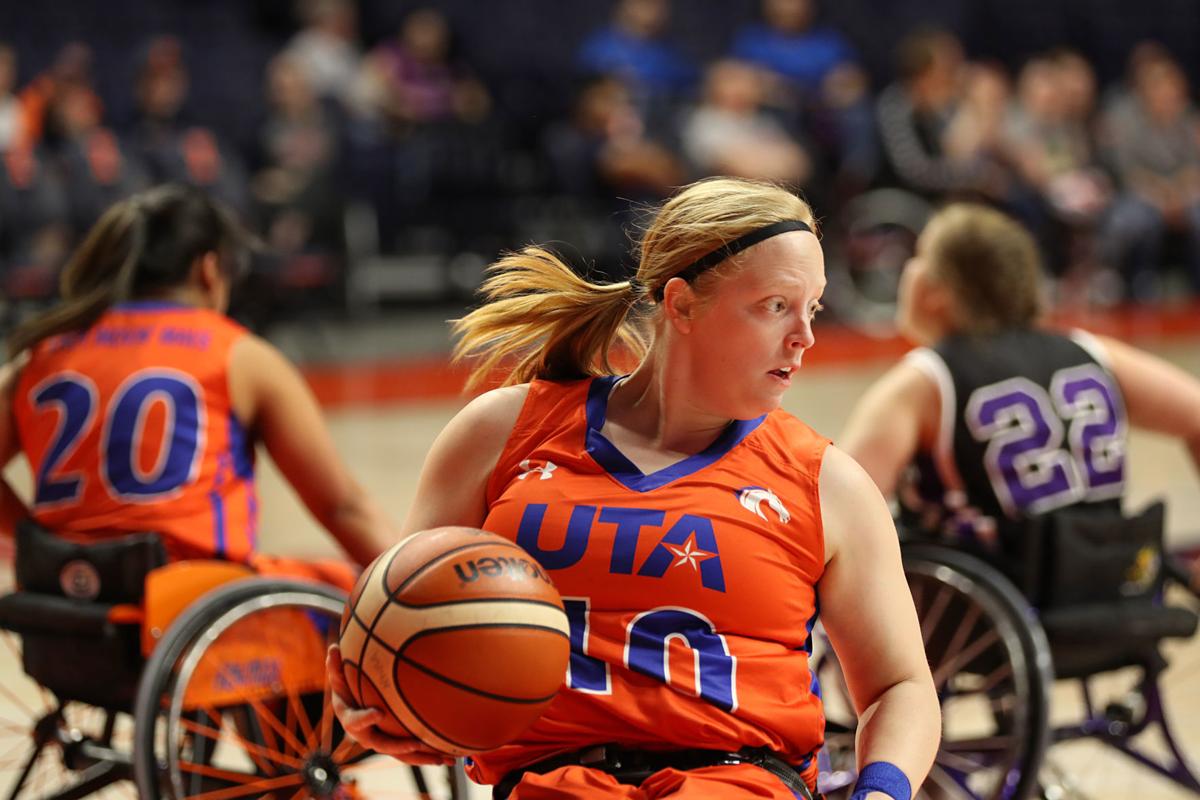 Morgan Wood, Lady Movin' Mavs alumna, prepares to move the ball across the court during the game against the University of Wisconsin–Whitewater on March 14 at State Farm Center in Champaign, Illinois.

The Lady Movin’ Mavs have some big shoes to fill.

Morgan Wood, Rose Hollermann, Abby Dunkin and Mikila Salazar are the four original members of the team. Two national titles and a couple of Paralympic gold medals later, they’ve left behind a legacy and a culture to be remembered.

“They set a culture where 99% isn’t good enough,” sophomore Annabelle Lindsay said. “If it wasn’t for them, we wouldn’t be as good as we are.”

Each of them set the bar for generations to come, but now that they’re gone, it’s time for that bar to be topped — a new team is coming off the bench and into the spotlight.

“They should be coming for our dynasty,” Wood said. “They’re not starting from the bottom anymore, they’re starting from two previous championships and a legacy of a team.”

Over the past few years, those original four were the key. They were all the team had, really.

In 2013, the program “started from the bottom,” as Wood mentioned, with whatever players head coach Jason Nelms could find. The Lady Movin’ Mavs were brand new to the realm of collegiate wheelchair basketball.

“Now it’s like building a team and actually an idea of what the team should look like,” he said. “Before it was, ‘Who can we get in here? You want to come play? Awesome, you’re coming, we’ll train you.’”

Leading the new pack is Lindsay, a high-pointer from Australia that’s poised to be one of the best. With the addition of freshman Elodie Tessier from Canada, the future is looking toward a more internationally rounded team.

On top of that, players like junior Angelina Welfle and senior Rachel Kroener are stepping out of the shadows. They have new roles now. New priorities.

The teammates they once knew aren’t teammates anymore — they’re opponents.

“We’re building the next generation to try to beat them,” Nelms said. “It’s like ‘OK, awesome. I hope you keep going. I hope you make it. I’ll give you all the words of wisdom that I can, but now I’m going to try to train people to kick your ass.’”

That’s just how it goes, Nelms said. Love the success along the way, but always keep focus on what’s at hand.

UTA’s experience isn’t all gone, though. Graduate student Darlene Hunter and junior Rain Kelley are two of the older players. They give the team a bit of an advantage when it comes to the rebuilding phase because they’ve been playing the game for a long time, Nelms said.

A new season is ahead, and those two will help mentor the younger players on the way to a third championship title.

Last season the Lady Movin’ Mavs fell to the University of Alabama in overtime of the national championship. It was a tough ending for those four seniors, but Lindsay is confident the team will peak in March to bring the title back to UTA — for them.

“We want to win it for them,” she said. “I think that will just show the quality of our program if we’re able to win championships, even if we’re losing our best players.”

The next generation of Lady Movin’ Mavs is preparing to leave its own legacy, away from what the original four started. Sure, they lost a few national team-caliber players, but more are on the come-up, Lindsay said.

UTA had a good program, but now everyone is chipping in, and everyone holds their own key.

“Person for person, I think this team is actually more talented than the last team,” Nelms said. “We had some talented players on the last one, but these ones, they’re growing up.”

A torch has been passed down, but it’s not necessarily just one big torch, Wood said.

The torch is a symbol of something her generation put together as a team. As a family.