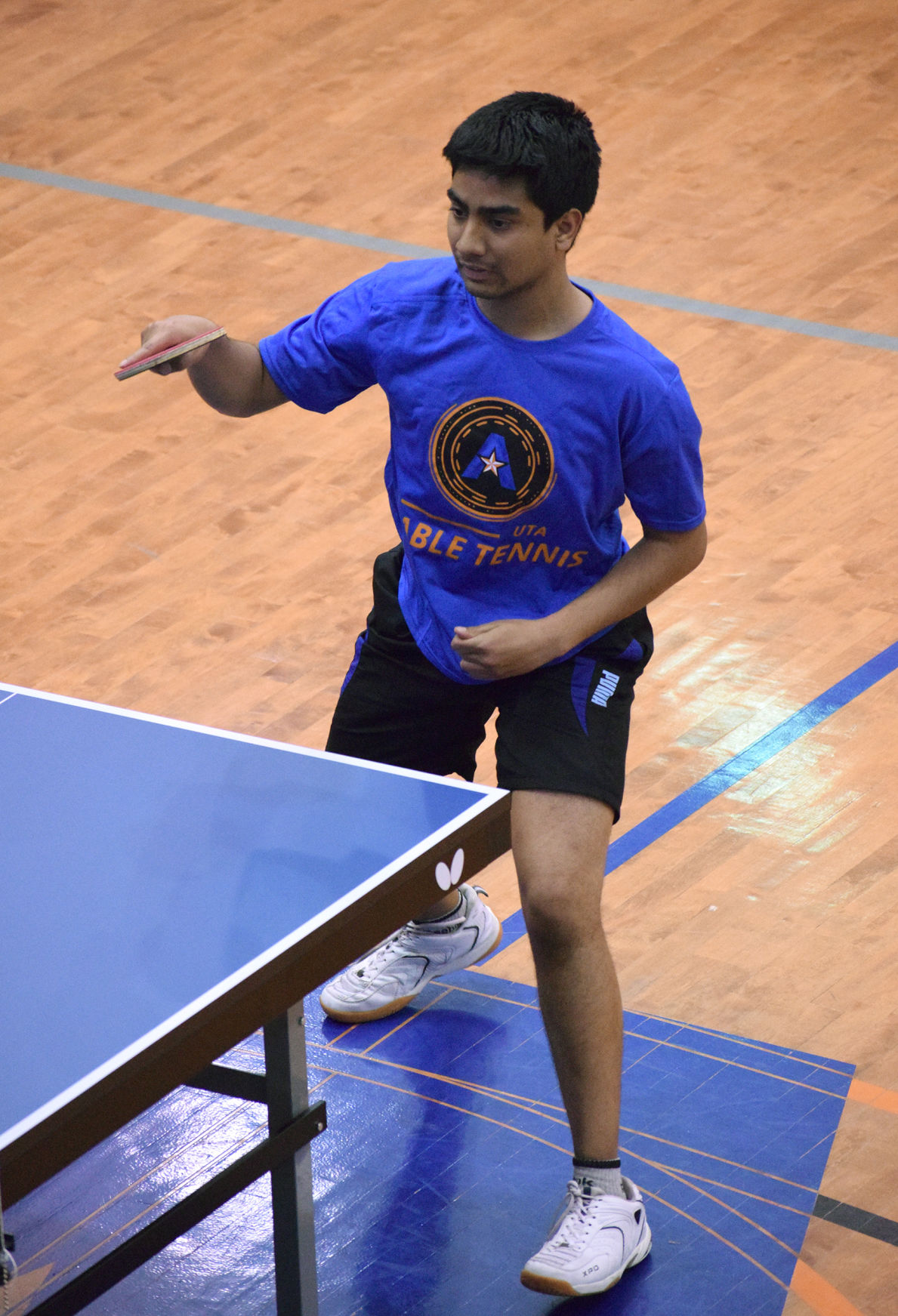 Senior Divya Chalise hits a ball at the UTA Table Tennis Open on Jan. 28 inside the Maverick Activities Center. Chalise and his brother Darshan began playing tennis in Kathmandu, Nepal, where the sport is less common. 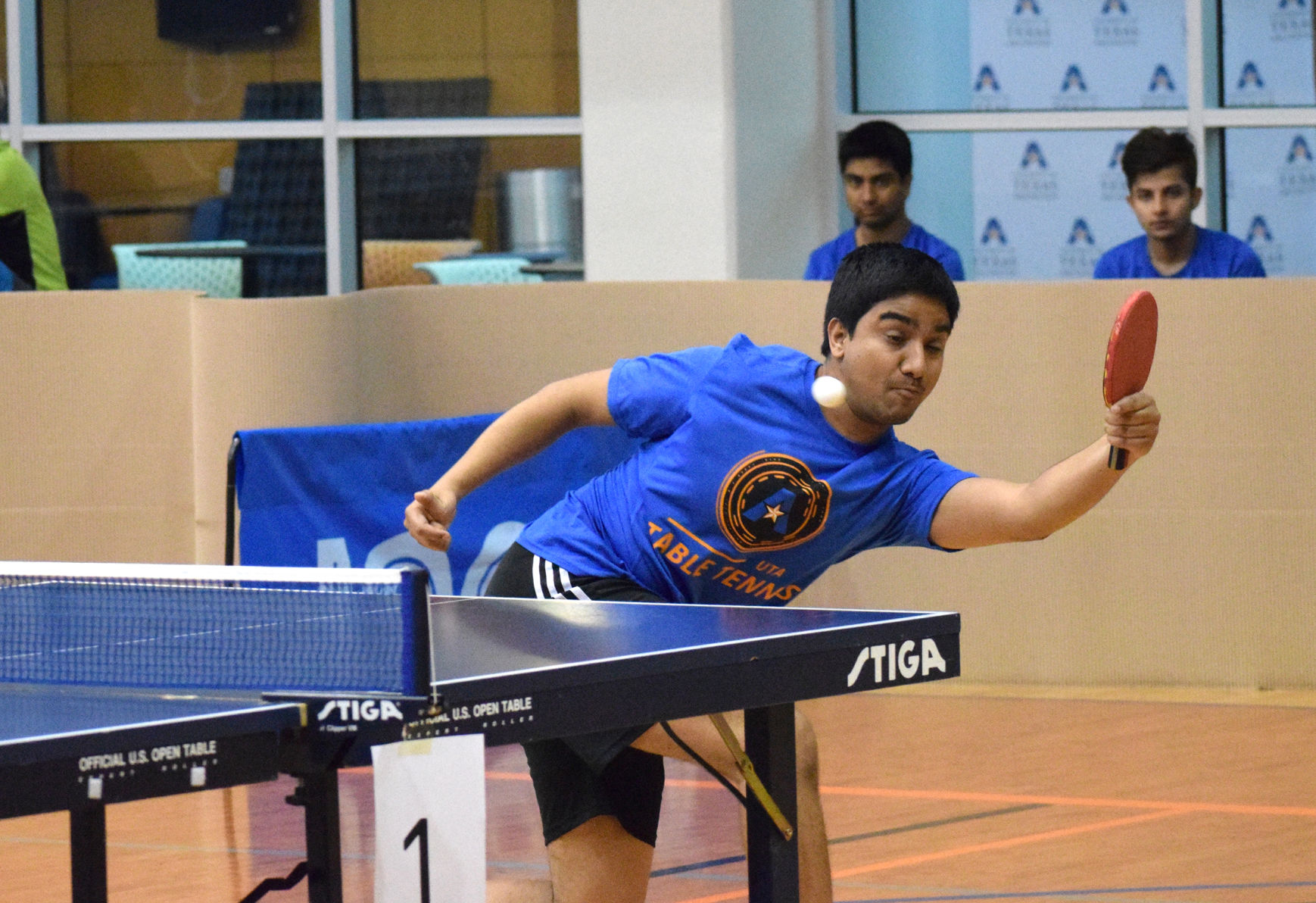 Senior Darshan Chalise extends his arm to hit the ball during the qualifying rounds at the UTA Table Tennis Open on Jan. 28 inside the Maverick Activities Center.

Senior Divya Chalise hits a ball at the UTA Table Tennis Open on Jan. 28 inside the Maverick Activities Center. Chalise and his brother Darshan began playing tennis in Kathmandu, Nepal, where the sport is less common.

Senior Darshan Chalise extends his arm to hit the ball during the qualifying rounds at the UTA Table Tennis Open on Jan. 28 inside the Maverick Activities Center.

Divya and Darshan Chalise can be seen with the UTA Table Tennis Club, playing the game for hours and engaging in sibling rivalry.

Both started playing tennis at the same age, which led to their love for the sport, further strengthening their bond at UTA.

The Chalise brothers grew up in Kathmandu, Nepal, where playing table tennis was seen as a rarity.

“Table tennis was not that famous,” said Darshan Chalise, physics and math senior. “We did play that nontechnical table tennis while growing up. We played it more as recreational sports more than sports we are serious about.”

Mechanical engineering senior Divya Chalise said playing tennis back home really helped he and his brother develop their skills for table tennis, preparing them for all the challenges they would have to face.

“Tennis in Nepal is no where compared to tennis over here,” Divya Chalise said. “When we first came to UTA, we actually tried tennis, going to the court and seeing how players played. We thought though, physically to be at their level, it would be much tougher.”

A number of skills had to be developed over time, said the Chalise brothers as they decided to pursue table tennis at the collegiate level. While speed and getting adjusted to the balls came easy, they still faced a few difficulties.

The pair joined the the Table Tennis Club in fall 2015, when the club formed.

“It’s always good to be in a sports team because you have that team bonding, you get good friends,” Darshan Chalise said. “That’s the best part about being in a sports team.”

Currently, the Chalise brothers practice for about 12 hours a week, but plan to increase their training to 20 hours a week leading up to the national tournament.

Over time, Sagi said he has learned to distinguish them based on their playing style.

“They are the ones who are improving the most here,” Sagi said. “At first, until they hold their rackets in their hand, I couldn’t tell who is who.”

When it comes to their individual playing styles, they can be identified more easily, but their personalities are what really defines them as brothers, Sagi Said.

“Divya plays long pips, Darshan plays offensive on both of his flanks, Sagi said.”  “They both are very good at studies and they both work very hard in whatever they want. They fight also like husband and wife.”

The Chalise brothers said they plan to attend graduate school and hope to remain connected with the sport wherever the next chapter in life takes them.