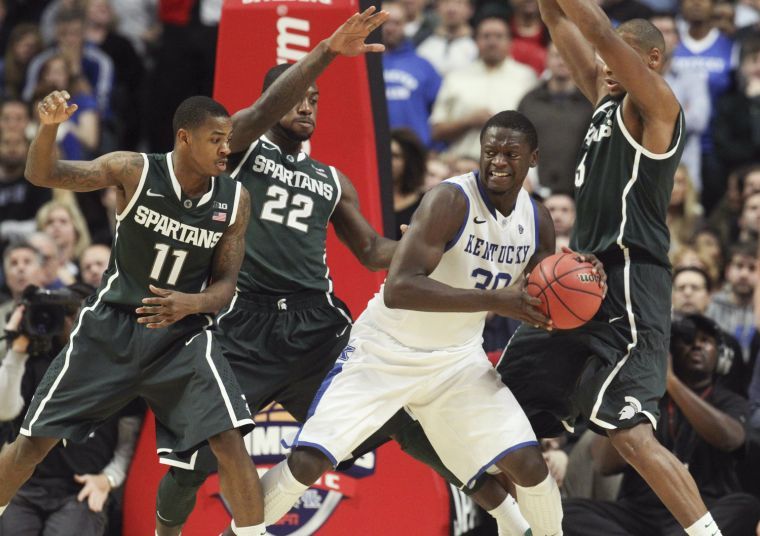 Julius Randle (30) of Kentucky is surrounded by Keith Appling (11), Branden Dawson (22) and Adreian Payne of Michigan State during the second half on Tuesday, Nov. 12, 2013, at the United Center in Chicago. Michigan State won, 78-74. (Nuccio DiNuzzo/Chicago Tribune/MCT) 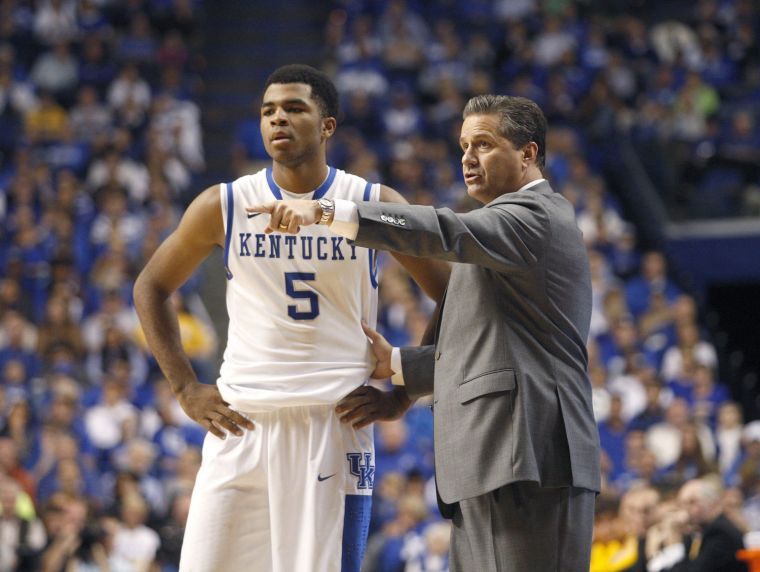 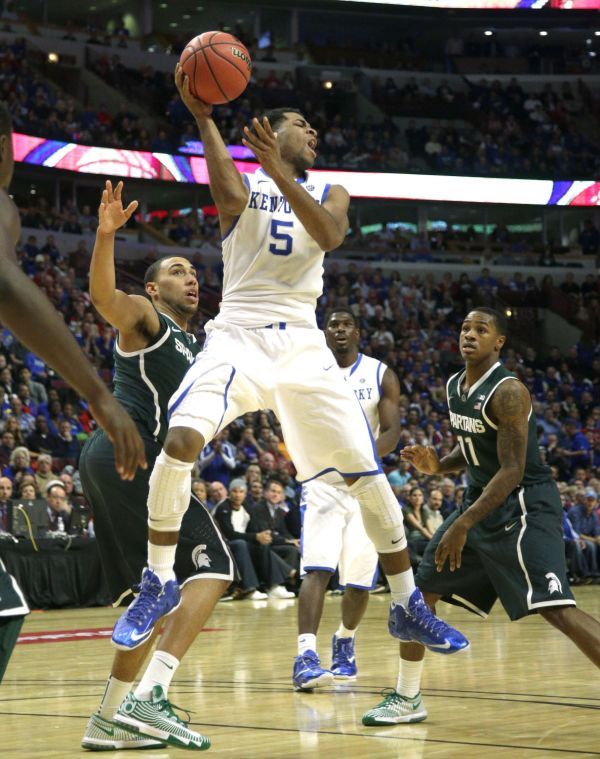 Andrew Harrison (5) of Kentucky looks to pass after being caught above Denzel Valentine of Michigan State on Tuesday, Nov. 12, 2013, at the United Center in Chicago. Michigan State won, 78-74. (Mark Cornelison/Lexington Herald-Leader/MCT)

After losing to Cleveland State 83-73 during Friday night’s Homecoming game at the College Park Center, the men’s basketball team is back on the road. The Mavericks square off against the No. 4 team  in the nation, the Kentucky Wildcats on Tuesday night at Rupp Arena in Lexington, Ky. Here are five things to know about Kentucky before tip-off for the first meeting between the two.

The Wildcats entered the 2013-14 college basketball season ranked No. 1 in the Preseason AP Top 25 Poll, even after losing four starters from last season. Kentucky was ranked at the top spot in large part because of nine incoming freshmen.

The No. 1 ranking didn’t last long. The Wildcats lost to then No. 2 ranked Michigan State Spartans 78-74 in the Champions Classic Nov. 12 in Chicago, Ill. The loss kicked Kentucky back to the No. 4 spot, according to Monday’s latest Associated Press Top 25 Poll.

Kentucky entered the season with one of the most anticipated recruiting classes, which includes nine freshmen on the team — three of them from Texas.

The most notable newcomer is Dallas native Julius Randle, who was a McDonald’s All-American out of high school at Prestonwood Christian Academy and has drawn a lot of national attention. The 6-foot-9 power forward bossed his way into a strong display against Michigan State with 27 points and 13 rebounds in 35 minutes.

The Harrison twins, Andrew and Aaron, hail from Richmond, Texas, and are third and fourth on the team in scoring, averaging 11.7 and 10.7 points, respectively. The 6-foot-6 guards attended Travis high school and won the 5A state title in the 2011-12 season.

As head coach of Memphis University in the 2007-08 season, Calipari squared off against UTA and head coach Scott Cross in the opening round of the NCAA Tournament. Calipari’s No. 1 seed Tigers defeated the No. 16 seeded Mavericks, 87-63 in Little Rock, Ark.

The Memphis Tigers reached the national title game that season, only to lose against Kansas in overtime. Calipari’s Tigers would end up giving up their 38-2 record season because of NCAA rules violations.

Now Kentucky head coach, Calipari is in his fifth season leading the Wildcats and leads the NCAA in total wins since 2005 with 260.

UTA and Kentucky share two similarities in their schedules this season.

Cleveland State, who defeated UTA during Homecoming last weekend, is also a participant in the Keightley Classic.

Boise State, who dropped 116 points against the Mavericks Nov. 8 in Boise, Idaho, takes on the Wildcats Dec. 10 in Rupp Arena.

University of Kentucky comes to Arlington

Baylor will host Kentucky at AT&T Stadium on Dec. 6, as they participate in the inaugural Big 12/SEC Challenge. Kentucky head coach John Calipari will be hoping that his team can return to the stadium in March when the Final Four will be held.