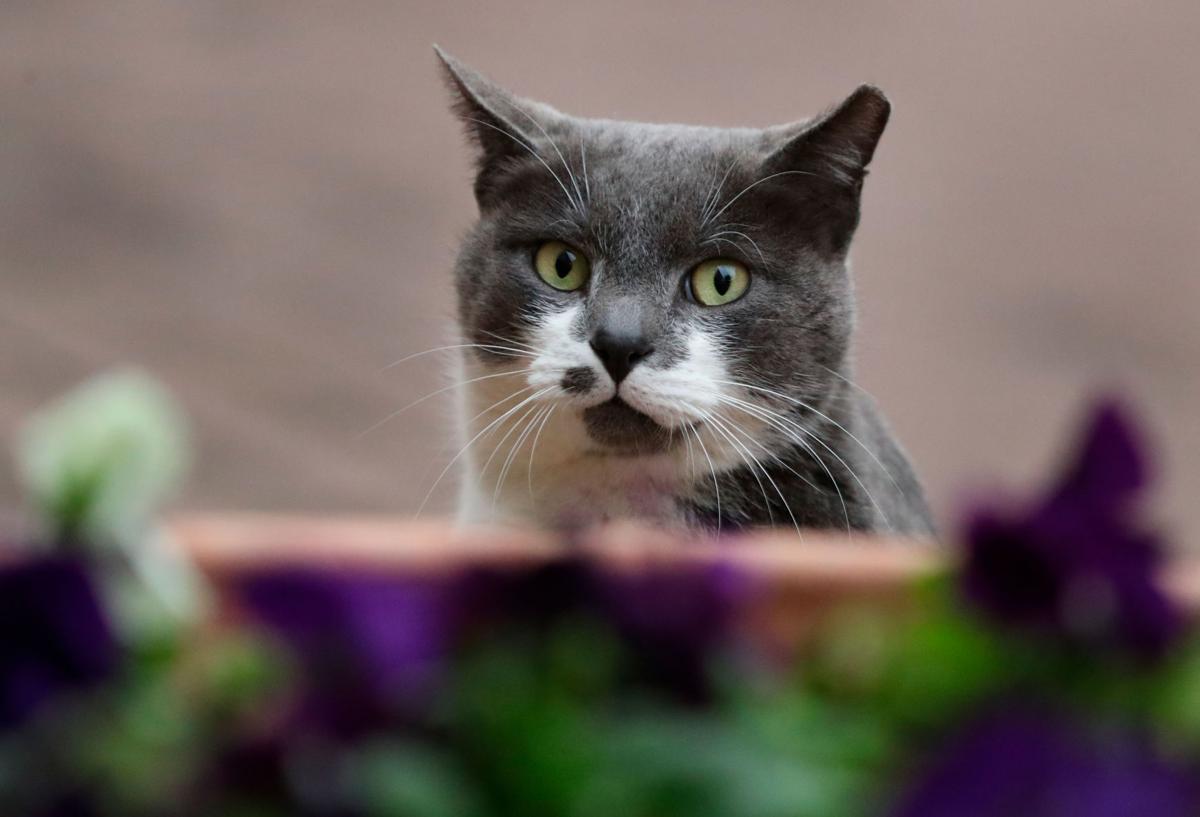 A stray cat looks over a bed of flowers before scurrying off on March 11 near the Chemistry and Physics Building. Stray cats can be seen around various parts of campus. 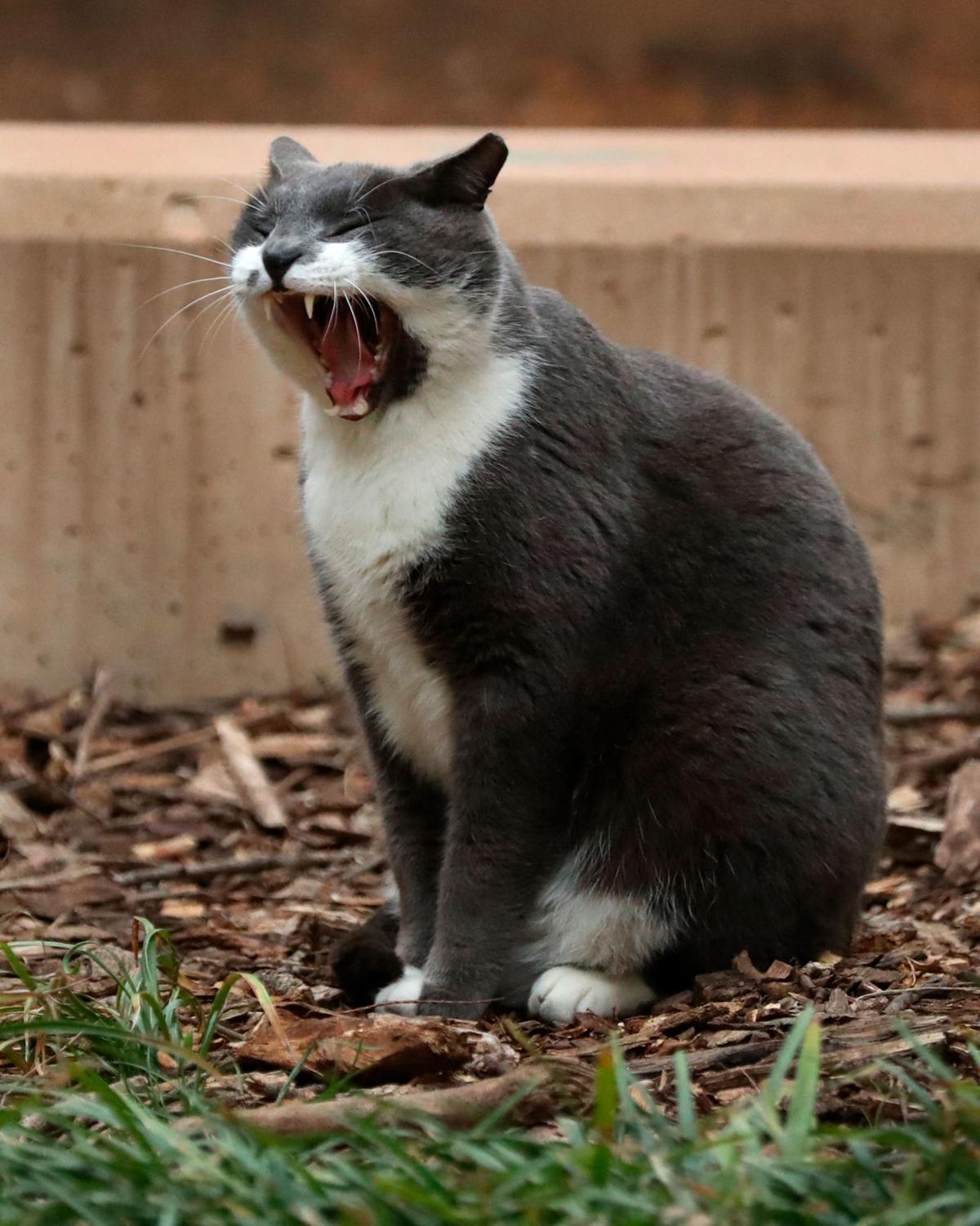 A stray cat yawns on March 11 near the Chemistry and Physics Building. There are numerous stray cats that roam around campus.

Business management junior Zihan Hossain said she noticed several stray cats on campus and submitted these questions: Are these cats safe to touch? Have they ever been spayed/neutered? UTA Unfolded investigated.

Hossain said she regularly sees the cats at various locations around campus and has seen numerous students petting them.

“I want to play with the cat myself,” Hossain said. “I feel like it’s a great source of relieving my stress, but I’m afraid of getting a bad disease or getting bitten.”

Health Services director Angela Middleton said most diseases carried by cats aren’t transmittable to humans. However, cat bites and scratches are fairly common and can become infected if not properly treated, she said.

Middleton said cat bites are generally much deeper punctures than dog bites because of how cats’ teeth are shaped. Although cats are much less likely to actually bite a person than a dog is, cat bites become infected in about half the time, she said.

She recommended anyone who gets bit by a cat to see a doctor. Signs of infection might include worsening pain after the first couple of days, redness and pus around the wound and pain when moving the bitten area, Middleton said.

She said cat scratches are much more common than bites and easier to treat. Anyone scratched or bitten by a cat should immediately treat the wound with basic first-aid, clean it with soap and water, and stop any bleeding.

“In general, if you don’t want to get bit, I would say don’t pet the cat,” Middleton said.

Civil engineering junior Erin Owens said UTA has an active problem with feline health on campus because if one cat is sick, it’s likely to transmit its illness or disease to the rest of the cats on campus.

Owens and biology junior Eryn Von Husen are working together to revive the Cat Coalition to care for the cats on campus and provide an outlet for cat lovers to unite.

With Von Husen’s help, she plans on using the Cat Coalition to initiate managed TNR (trap-neuter-return) colonies, where the cats are humanely trapped, taken to a veterinarian to be spayed/neutered, rehabilitated and safely returned to their outdoor habitations. This practice ensures that every cat stays healthy, Owens said.

It’s important that the cats are healthy because many people want to interact with them, Owens said.

“These cats are abandoned cats, they’re not ferals,” she said. “Pretty much every single one I’ve ever seen on campus is friendly.”

Von Husen said each of the cats she and Owens have encountered are either spayed or neutered, which they know because the cats’ ears are tipped, which is a quick cut on the tip of their left ear indicating they’ve been sterilized.

Von Husen first noticed the cats on campus this semester and took immediate attention. She noticed a cut on one of the cats’ heads and took it upon herself to start a GoFundMe account to raise money to take the cat to the vet.

After raising the funds, Von Husen and Owens had the cat taken to a veterinary clinic, where it was diagnosed with feline leukemia, a disease which only affects cats.

To keep it from suffering, Owens and Von Husen agreed with the vet to euthanize the cat.

Owens said once the Cat Coalition is officially revived, its priority will be to vaccinate the felines.

Hot dog: how to keep your pets safe and cool during the summer

UTA Unfolded: As a music major, why am I required to take two math credits?

Originally founded in 2003, the revamped club aims to ensure the health and safety of campus strays and educate the UTA community on ways to manage feral cats.

Trapping the cats may be done in a humane way, and the neutering, but you are doing the cats a disservice by doing the last part. After keeping them in your care, and I am sure you are feeding them, they could lose their ability to hunt and defend themselves to the extent they had before the ordeal.

Just leave the cats to do what they have been doing since way before any of you ever stepped foot on this campus. It is called nature for a reason.

Just as the article said, these cats are abandoned house cats. There is really nothing natural about how they’re living at UTA, they are fed by people who leave out cat food or share their food with them. They’re visibly seeking attention and the company of people which is why people think they’re coming from a home environment, that’s why they’re so friendly and enjoy being pet. They are not wild and so taking them in for occasional veterinary care would not affect their ability to adjust back to their environment. If you even see a feral cat, it will not let you approach it.

Interested in getting updates and seeing pictures of these sweet fur babies, including Apollo (pictured in the article)? Check out their Instagram, @catsofuta!

Also I hope a proper burial was given to the cat euthanized.

The yawning cat is named Sprinkles, AKA Brazos Cat

My initial reaction to this story was very positive until I wondered about the impact this has on the local bird and song bird population. While I do appreciate the care shown for the cats, are we doing anything to minimize the impact these highly efficient hunters have on the avians around campus and it surroundings? With this artificial support of the felines can we at least measure the impact and investigate steps to not over hunt the area? If they only hunted grackles, I wouldn't have said a word.

Todd, of course cats are natural predators and inherently do kill birds. But the controversial studies that have come out recently painting outdoor cats as the perpetrators of genocide are not what they seem - see here for what I assert is a fair and unbiased assessment: https://www.npr.org/sections/13.7/2013/02/03/170851048/do-we-really-know-that-cats-kill-by-the-billions-not-so-fast

And besides, humanity has lived alongside feline-kind for millennia and this is nothing new, right? The only thing new is that now some of us keep them indoors only! And maybe it's just me, but the bird population on campus seems to be doing just fine.

Plus, this cat group running a TNR campaign will stabilize the cat population to a lower equilibrium which will prevent any such problem from ever developing. So, in response to your question about "are WE doing anything" my answer is yes! The answer is that WE can donate to and support this organization once it is official and open for accepting donations!