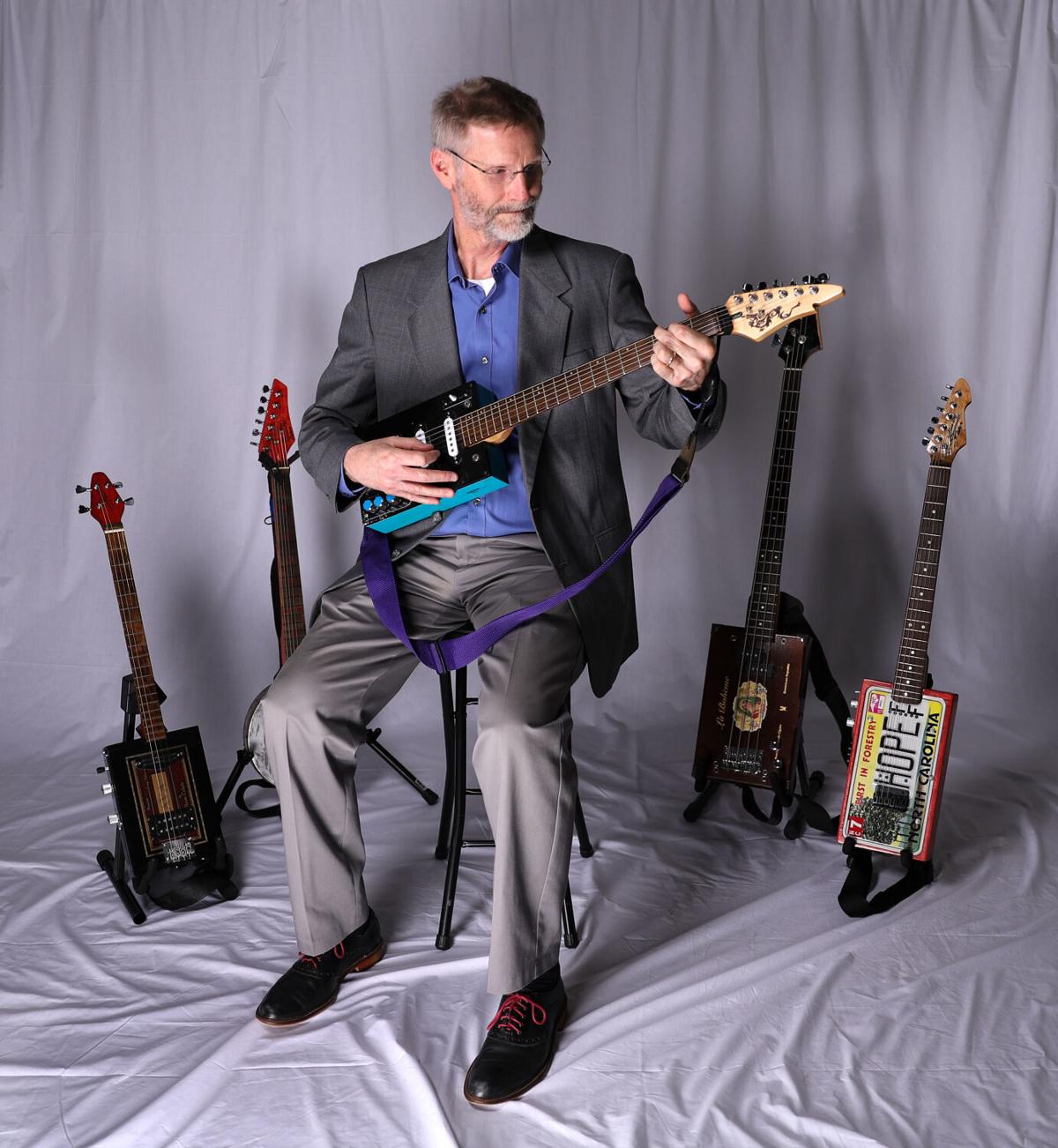 Clay Clark, biology professor and chair, pictured with his five custom-built guitars built from cigar boxes April 12 in the University Center. Clark built the custom guitars out of boredom after moving to Arlington six years ago. 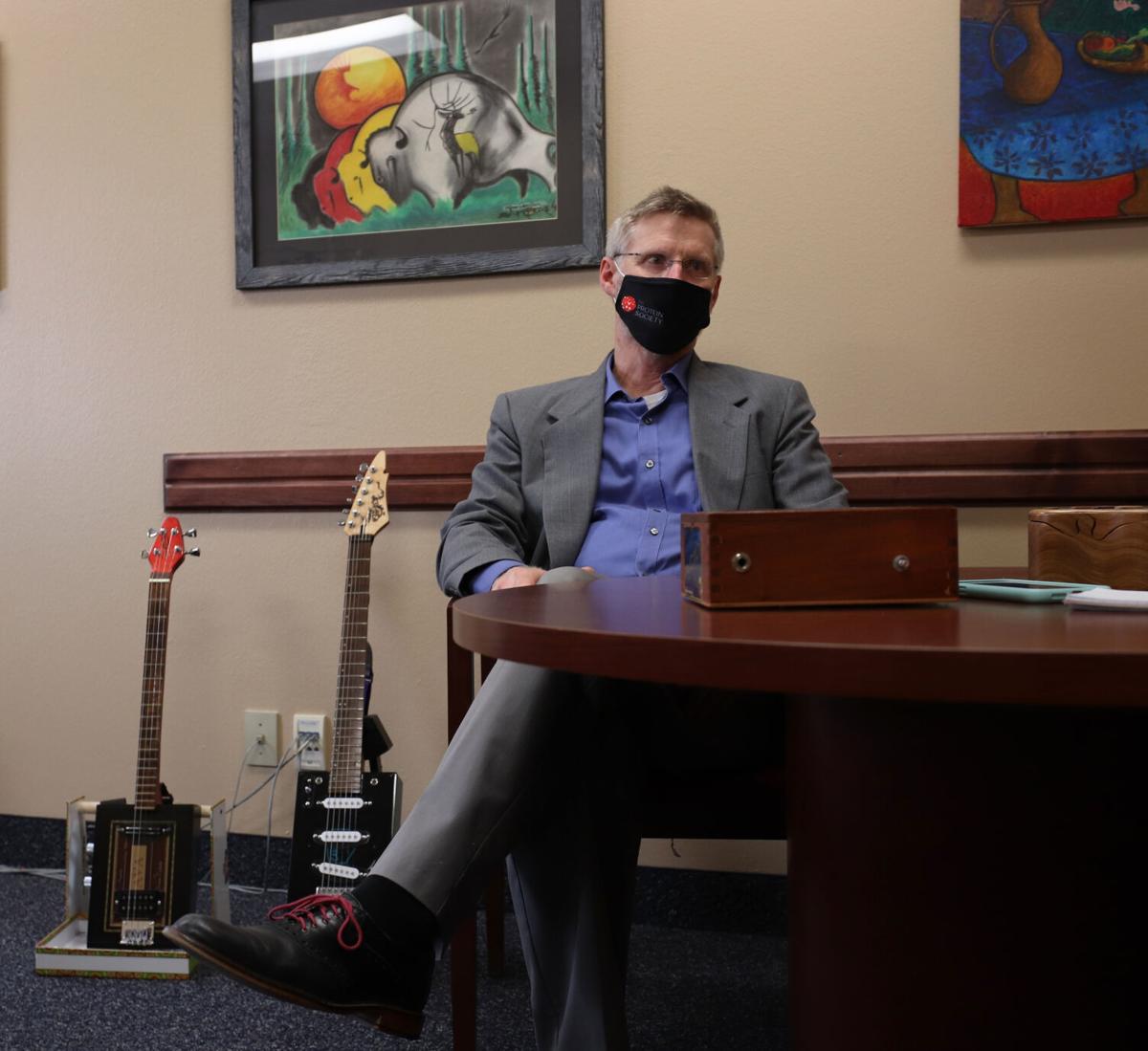 Clay Clark, biology professor and chair, sits in his office next to two of his guitars April 12 in the Life Science Building. Clark grew up in Georgia where he developed a love for blues music.

Clay Clark, biology professor and chair, pictured with his five custom-built guitars built from cigar boxes April 12 in the University Center. Clark built the custom guitars out of boredom after moving to Arlington six years ago.

Clay Clark, biology professor and chair, sits in his office next to two of his guitars April 12 in the Life Science Building. Clark grew up in Georgia where he developed a love for blues music.

Clay Clark, biology professor and chair, has about 15-20 guitars filling his closets and home. He’s built most of them himself, and he thinks he has room for more.

When he isn’t performing his academic and administrative duties, Clark invests a majority of his time building cigar box guitars, performing at venues and busking, or street performing.

Six years ago, Clark was looking for a hobby, so he bought a cigar box guitar, deconstructed it and thought the reverse might be fun.

Clark has played guitar for as long as he can remember, and growing up in southern Georgia, he was surrounded by old school country and western music. His connection with that music led him to play the blues, which was part of a movement synonymous with cigar box guitars, he said.

Clark said building cigar box guitars is fun, and he likes the unique sound of the guitar because they’re made with three strings, so they have a thinner sound compared to a six-string guitar.

“It’s surprising how much different music you can make with just three chords,” he said.

Although Clark has about 30 guitars in his house, he said he never has enough guitars. His wife, while supportive, wasn’t happy about the increasing stock, he said.

Clark said he reached a balance when he started selling his guitars on Etsy and Reverb, and when he stopped telling his wife where he puts the guitars.

When building a guitar, he makes prototypes to see if his ideas work, and if they do, he’ll incorporate them into other guitars, Clark said.

Since Clark plays guitar, he has high standards for his builds, so if it satisfies him, it can satisfy most, he said.

Clark buys the cigar boxes from a smoke shop, finds wood for the neck of the guitar, and then he takes it to a workshop at his house, he said.

The electronics are the hardest part in building the guitars, since he’s trying to fit a lot of wires and pickups — a magnet wrapped in copper wiring that amplifies the sounds of the strings — in the box, Clark said.

It’s also a challenge to balance the guitar because of how light the boxes are, so he has to put a weight in the box, he said.

Chuck Moore, Arlington resident and Clark’s busking partner, said Clark has a physical connection with the music he plays because he builds guitars.

Clark has always been driven when it comes to playing, and he’s very precise in his performances, Moore said.

“I think that's his mentality because he's a scientist, he attacks everything very precisely,” he said.

Clark has also performed in open mics and live streams with his son Addison Clark, a computer engineering graduate student.

They get together once a week and perform Black Sabbath songs with Addison Clark on the bass and Clay Clark on the guitar.

“[Music] is a really big part of both of our lives,” Addison Clark said.

He said he and his dad both have quiet natures, but playing and listening to music gave them something to do together.

Since Clay Clark works at a university, he’s always learning something new, and music is no different, he said. It’s a growth experience, and he’s never too old to learn something new.

“You put in all this effort to learn something, and then you see how well the product turns out in the end, [it] just makes it even better,” he said.