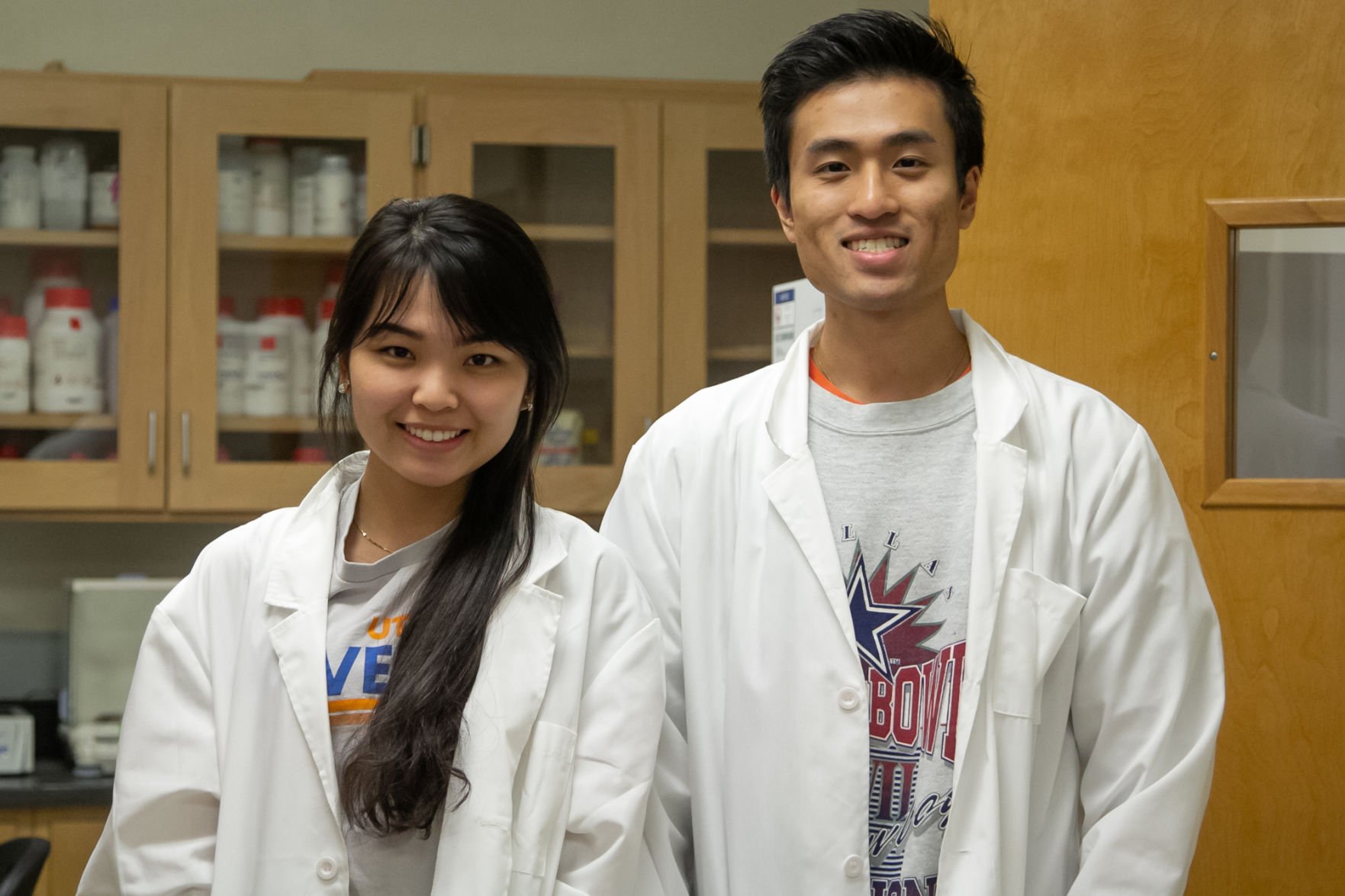 Biology seniors Hillary Vo and Dustin Luu stand Nov. 7 in the basement of the Life Sciences Building. Vo and Luu are involved in a study of how particular embryos react to different light and storage times. 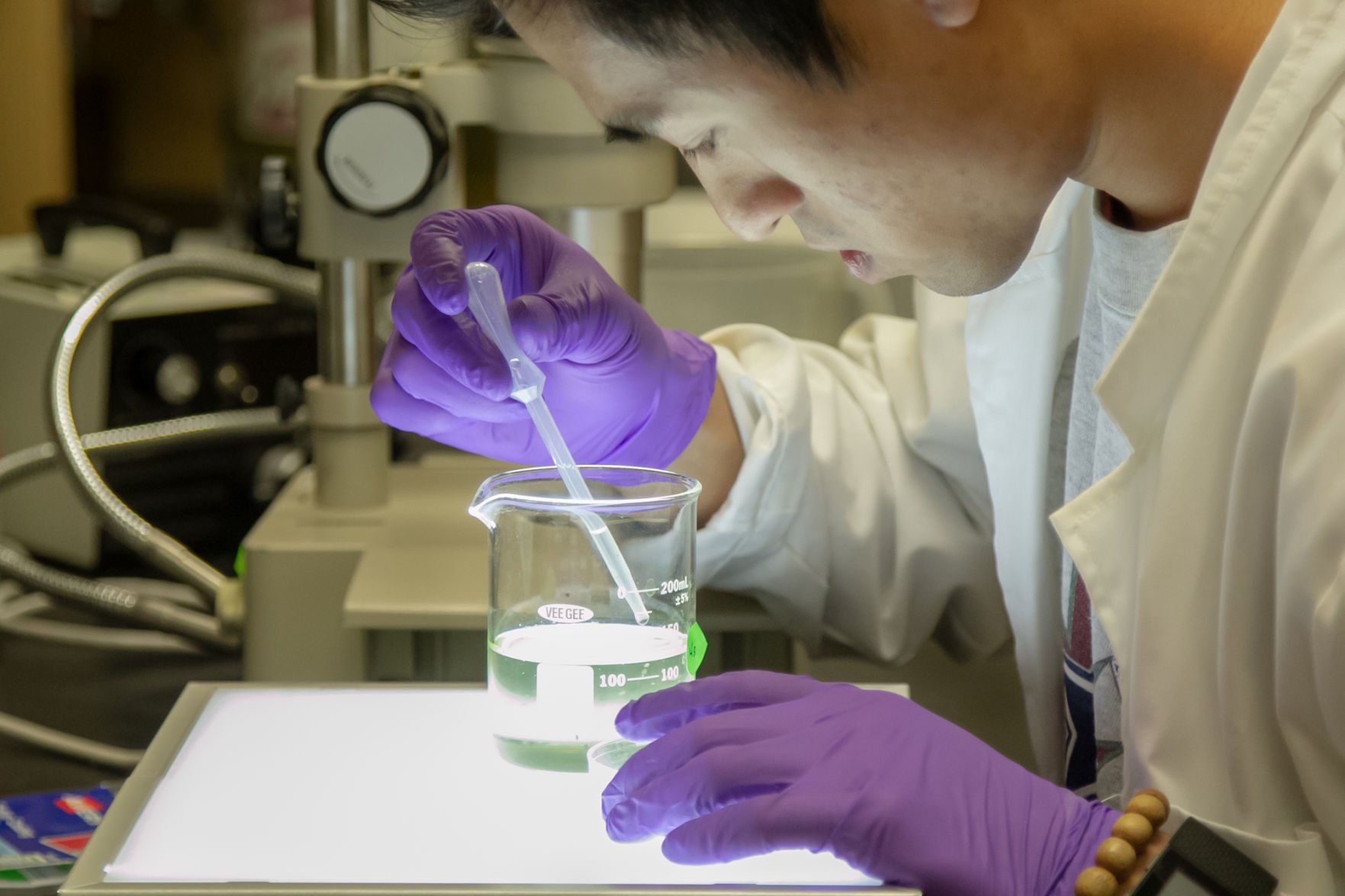 Biology senior Dustin Luu uses a pipette to catch Daphnia on Nov. 7 in the basement of the Life Sciences Building. Daphnia are tiny animals commonly used in research.

Biology seniors Hillary Vo and Dustin Luu stand Nov. 7 in the basement of the Life Sciences Building. Vo and Luu are involved in a study of how particular embryos react to different light and storage times.

Biology senior Dustin Luu uses a pipette to catch Daphnia on Nov. 7 in the basement of the Life Sciences Building. Daphnia are tiny animals commonly used in research.

What started with forgetting embryos in an incubator for another research project ended with two UTA undergraduate students publishing their first research paper in a peer-reviewed journal.

Biology seniors Dustin Luu and Hillary Vo submitted a paper titled “An Efficient Method for Hatching Diapausing Embryos of Daphnia pulex Species Complex” to the Journal of Experimental Zoology. The study looks at the effect of ultraviolet light and different amounts of storage time in darkness on the hatching efficiency in two species of the Daphnia pulex species complex, according to the paper abstract.

The embryos were placed in incubators in total darkness for different amounts of time before being exposed to ultraviolet light. Luu said this helped speed up the hatching process.

“I accidentally found this by forgetting the embryos in the back of the incubator,” Luu said. “Then I saw that they hatched.”

Work submitted to a peer-reviewed journal is read by a group of experts on the subject of the paper. They judge the quality of the work before accepting it for publication.

“That’s very exciting to me,” Xu said. “That’s my first time working with undergrads as lead authors to publish a paper.”

Xu said if you look at the entire biology department over the past two or three years, this may be the only paper published by undergraduates.

Yaowu Hao, materials science and engineering professor, received the grant to build on his past research on developing radiotherapeutic nanoseeds.

Luu and Vo first got involved with Xu’s research after he posted to his website that he was looking for undergraduate researchers.

Their research involved studying the hatching properties of embryos called ephippia produced from the Daphnia’s sexual reproduction. Daphnia are small aquatic crustaceans that can reproduce sexually or asexually.

It took about a year for them to research and write the paper submitting for review. The research paper was accepted last month after making some revisions.

Luu said embryos from different environments will hatch and develop at different rates. The embryos develop in clusters that need to be dissected for examination, Vo said. After dissection, the embryos are placed in an ultraviolet lit cabinet for observation.

During their research, Luu and Vo identified a set of lighting conditions that can trigger about 80% to 100% hatching rate for embryos, according to their paper.

Xu’s research seeks to determine what allows the Daphnia to reproduce both sexually and asexually. After Xu edited the genes of the embryo, Luu and Vo would experiment with hatching the modified embryos efficiently.

“Medical schools really look into research experience and having something to show for it is really nice,” Luu said. “It feels great to see your name.”

Here's a link to the article. Pretty interesting serendipitous discovery!