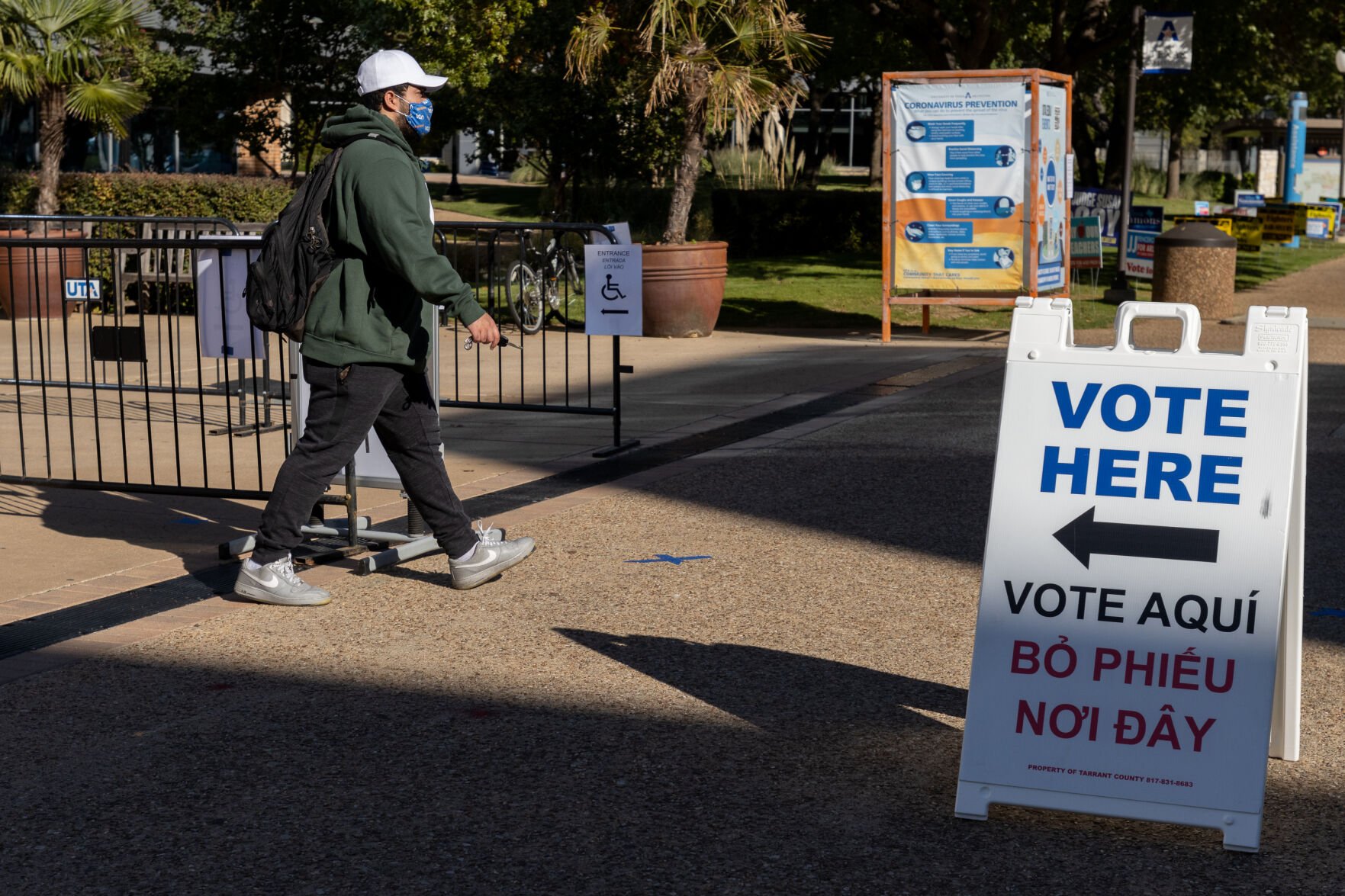 A student exits the Maverick Activities Center on Oct. 13. The MAC is an early voting location until Oct. 30. 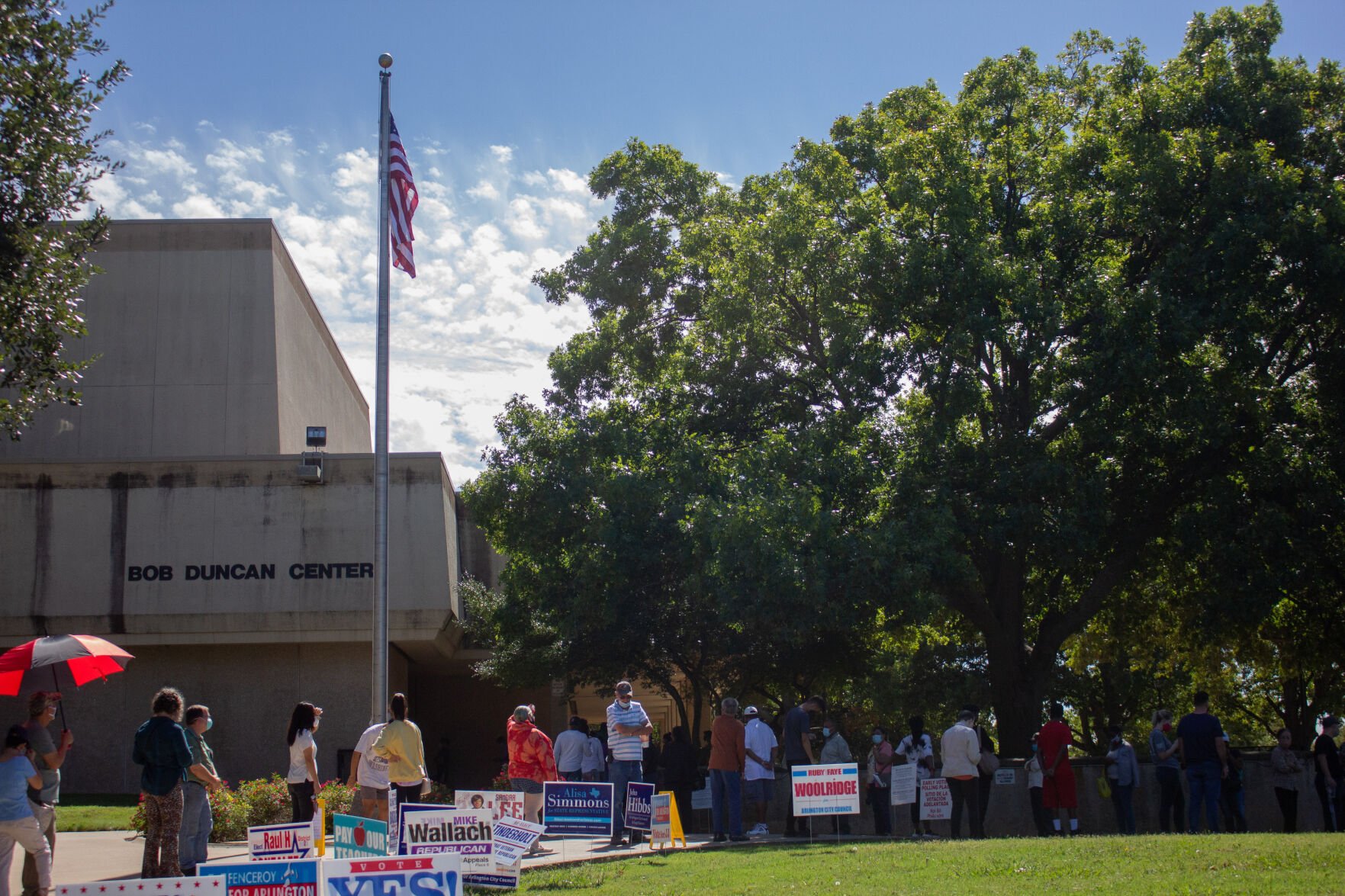 Arlington residents wait in line to cast their ballots Oct. 13 at the Bob Duncan Center. The line was the longest in the morning when early voting began. 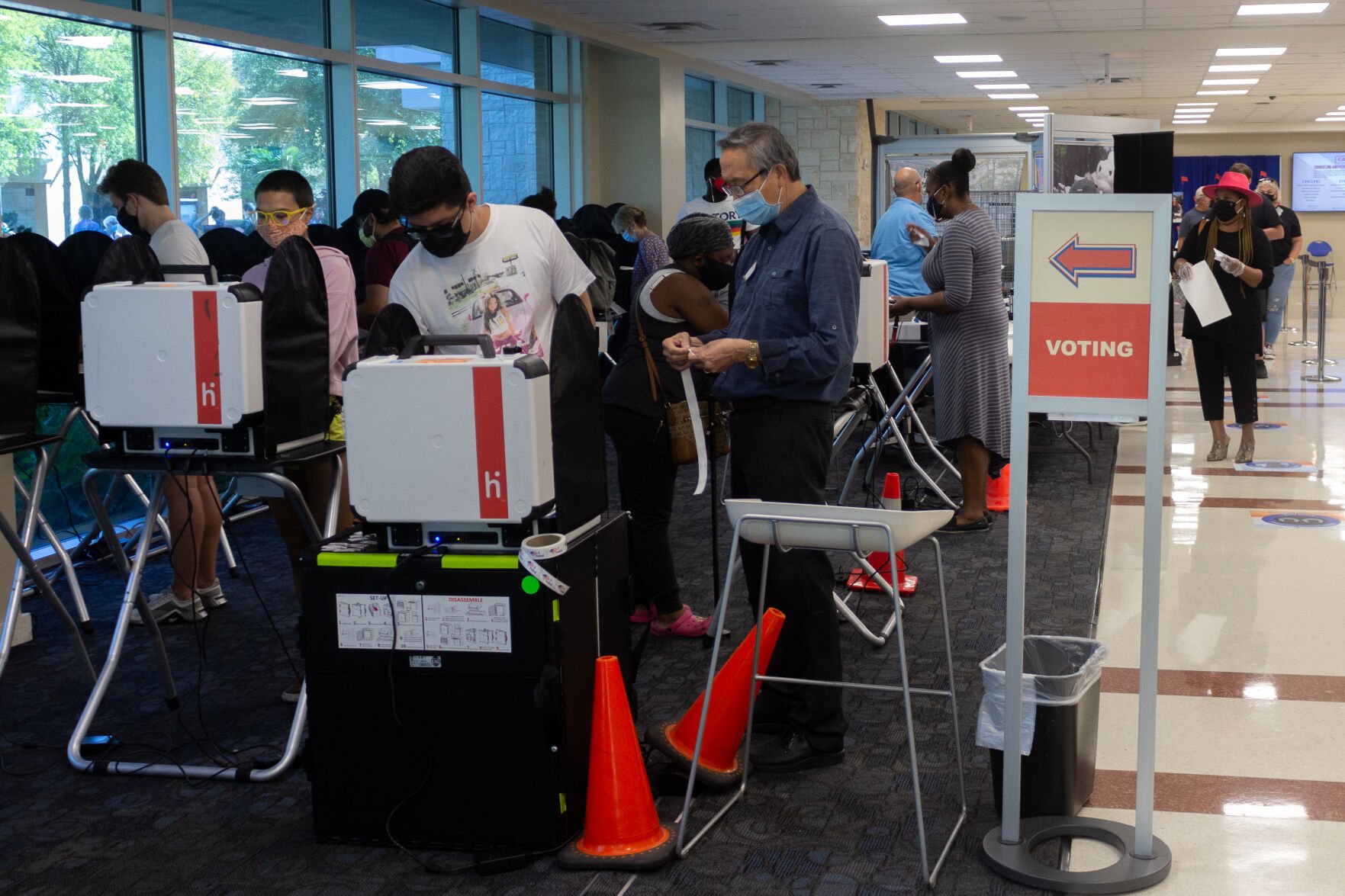 Voters submit ballots for the 2020 election on Oct. 13 at the Maverick Activities Center. It takes about 10-15 minutes to vote at the MAC.

A student exits the Maverick Activities Center on Oct. 13. The MAC is an early voting location until Oct. 30.

Arlington residents wait in line to cast their ballots Oct. 13 at the Bob Duncan Center. The line was the longest in the morning when early voting began.

Voters submit ballots for the 2020 election on Oct. 13 at the Maverick Activities Center. It takes about 10-15 minutes to vote at the MAC.

Lines stretched around polling locations in Arlington for the first day of early voting Tuesday.

Within the first three hours of early voting, over 12,000 ballots were cast in Tarrant County, according to the county’s election department Twitter page.

Outside Tarrant County College Southeast Campus, voters wearing face masks waited in the heat. Some came prepared with umbrellas for shade, and others brought folding chairs.

After standing in line for two hours in the morning, Arlington resident Sandra Fulton had to leave for an appointment before she could vote. Sitting in her green folding armchair, she came back prepared for the wait.

The first time she came out at 8 a.m., Fulton said the line was long and almost to the end of the street. Within eyesight of the portable buildings where the ballots would be cast, she said she was a lot further up than before.

Fulton said her first time voting was in the 1972 presidential election with President Richard Nixon and Sen. George McGovern.

Grand Prairie resident Paul Pierre-Antoine said he didn’t feel like the wait was too bad. He arrived at the TCC Southeast Campus location at 1 p.m. and had been waiting for about an hour.

After looking up locations ahead of time, Pierre-Antoine said he chose the polling site because it’s only five minutes from where he lives.

He decided to come out the first day of early voting because he didn’t want to wait for the longer lines on Election Day. Since the first election he voted in, the 2008 presidential election, Pierre-Antoine said he tries to vote in every single election.

Other early voting locations such as the Bob Duncan Center and the City of Arlington Water Utilities South Service Center also saw long lines that stretched outside the buildings and along sidewalks.

Driving into each location, voters were greeted with campaign signs planted away from the buildings but within eyesight.

The Maverick Activities Center, which serves as one of Arlington’s seven early voting locations, had a line that went outside the building. Free parking is available for voters without a parking permit in Lot 34.

Linguistics sophomore Mayeli Contreras brought her girlfriend and her girlfriend’s sister to come vote at the MAC. She said the line moved fast, and it didn’t take long to cast her ballot.

At the nearby Tarrant County Sub-Courthouse early voting location, the line was not as long as other locations, although it did go outside the building. Black Xs taped on the sidewalk marked where voters should stand for social distancing.

Arlington resident Randy Sawey brought the book How Few Remain by Harry Turtledove with him as he stood waiting.

For him, the line was longer than he anticipated, but Sawey said he was prepared and willing to wait. Since the first election he voted in, Sawey, an Army veteran, said he takes voting as an obligation.

“If I come here and vote [early], then maybe it’s less of a line later on for somebody else,” Sawey said.

Voted today, and the poll place was basically empty. Thought about voting yesterday but now glad I didn't. I wished the question of why people want to vote on literally the first day was asked. I understand if you have no other chances, but we have the entire month for early voting 😂