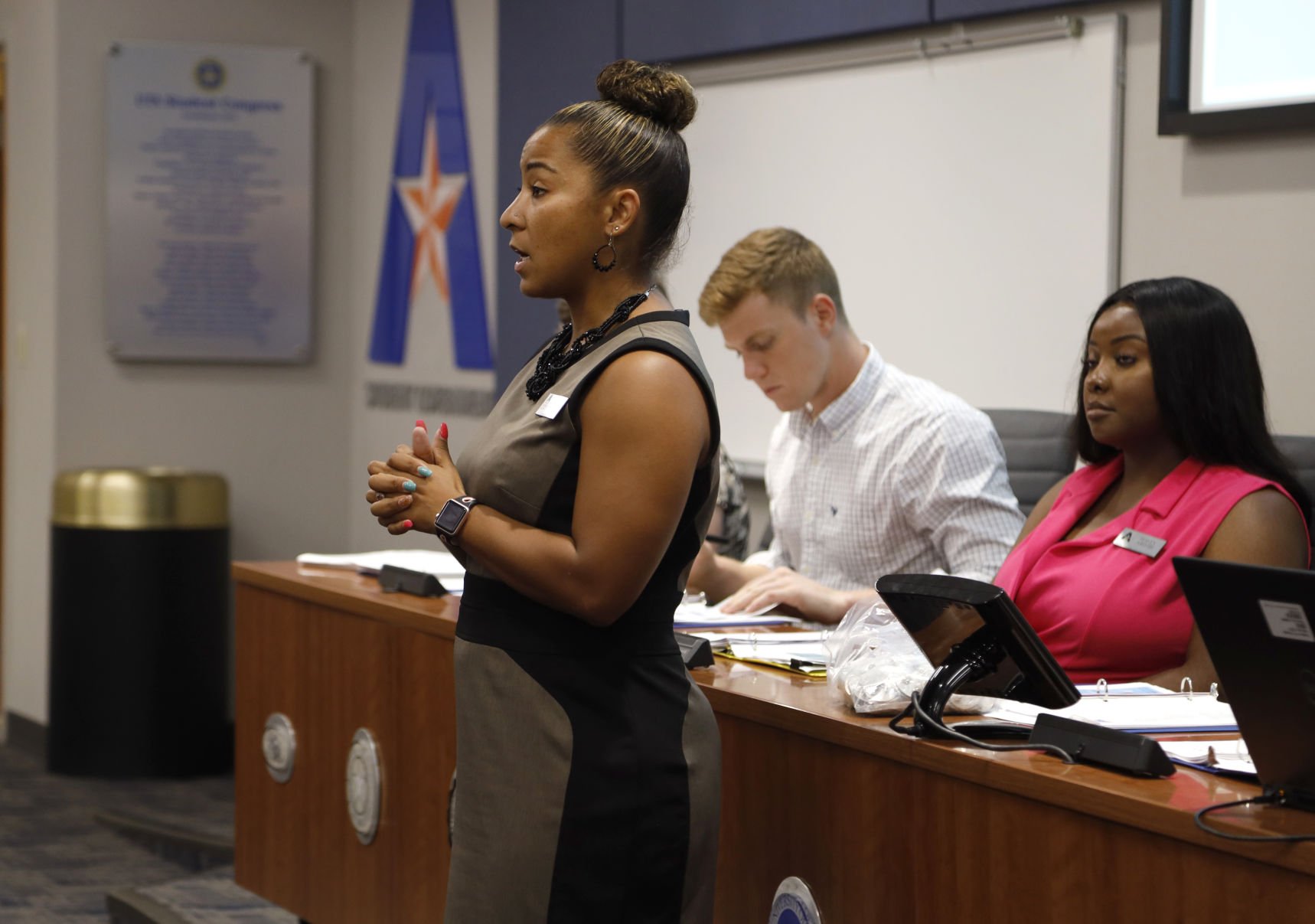 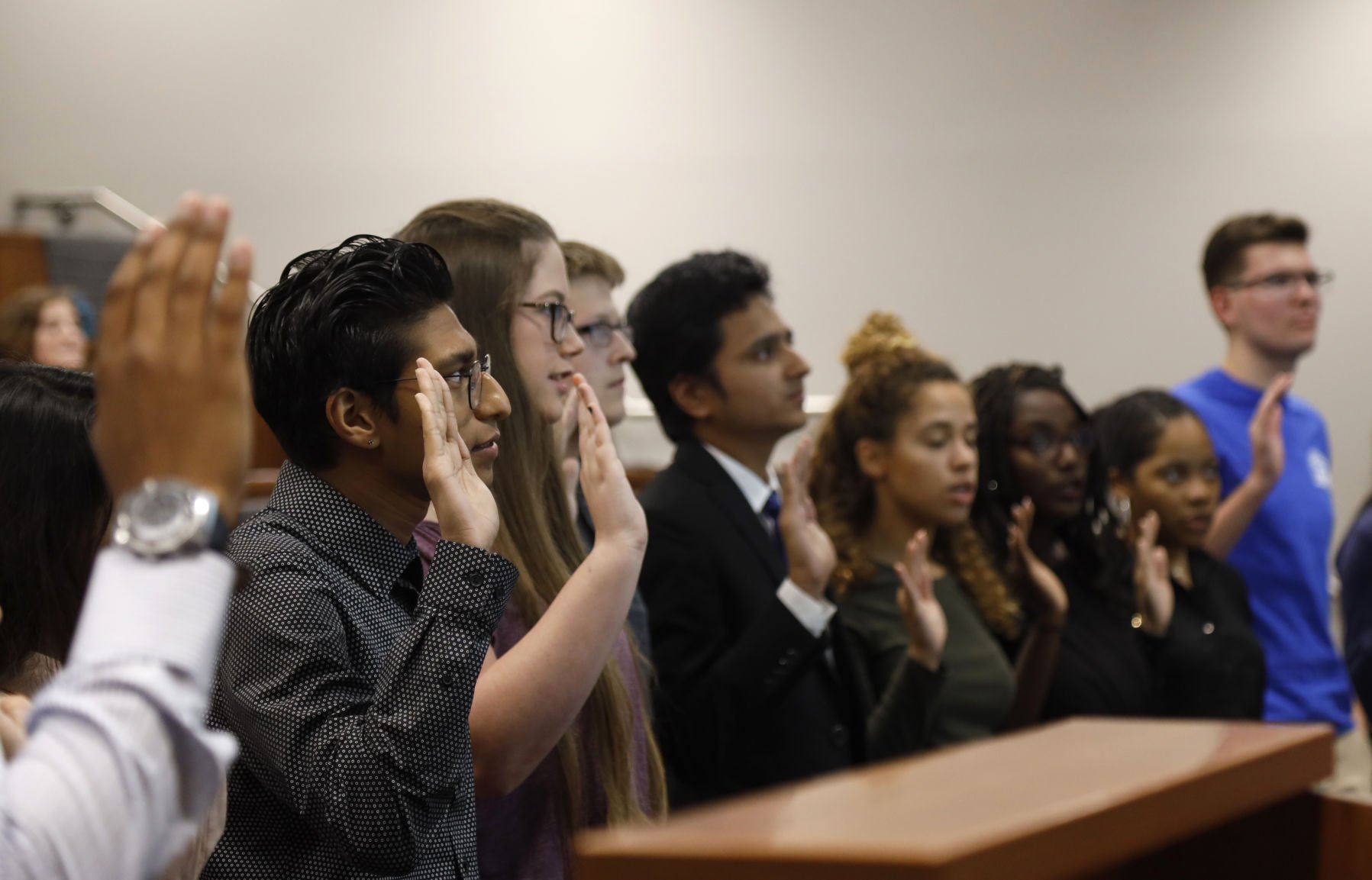 Student Success senator Raheel Ahmed, left, is sworn in with other new members at the Student Senate general body meeting Aug. 27 in the University Center. There were 17 senators sworn in.

Student Senate swore in 17 senators and introduced nine new resolutions at its first general body meeting of the semester Tuesday.

Haley Ariyibi, Speaker of the Senate, said she encourages students to apply and fill out an application online. Ariyibi said she is excited for the upcoming year and feels like there will be a lot of participation.

Business economics junior Daryn Trube, who was sworn in as a College of Business senator, received the August Senator Spotlight award at the meeting. She said she joined Student Senate to make a change.

Trube was recognized with the award for her active involvement and engagement, Ariyibi said.

“It’s always great when you have new people who decide to really use their voice,” she said.

Student body President Gavin Mitchell said he is looking forward to seeing the resolutions planned for this year and the research behind them.

“It being a university, we’re here to learn,” Mitchell said. “One of the things you can really learn well in Student Government is how to be civically engaged and how to lead others in being civically engaged.”

Resolutions tabled from the previous semester:

“Summer Schoolin” calls for the Student Senate to support the School of Social Work in offering summer classes that increase success and undergraduate degree completion rates.

“Locked The Keys To Success In My Car” calls for UTA Police Department and/or Parking and Transportation Services to provide car unlocking services for students and staff.

“ATTENTION! We Have a Wheely Good Bike Policy” calls for the university to install signs at bike racks that inform students on who to contact for the removal of an abandoned bike.

“OMG, 911!” calls for students to have the option to select their language of preference with emergency texts and for contracted workers to be able to sign up for the alerts as well.

“Who Cut The Cheese?” calls for the university to conduct research for a new ventilation system at Vandergriff Hall.

“Fix Me Through The Booth” calls for the university to install a Telehealth kiosk on campus to treat minor illnesses for a low cost, as a time-effective option.

“Funding For GRAs and GTAs” calls for the university to raise stipends and wages for graduate teaching assistants and graduate research assistants by at least 8% to help balance student living costs.

“An Advanced Notice Would Be Nice” calls for all the departments to make all graduate teaching assistantship and classroom assistantship assignments available by the first day of classes.

“We Need Adequate Lactation Rooms!” calls for the university to increase awareness of lactation rooms and the locations on campus, and for each room to be properly labeled with having at least one chair and table at all times. It also calls for each building to have at least one room on the first floor.

“UTA Is My Home” calls for the university to provide temporary housing for students who live in on-campus apartments, who have no permanent housing nearby and are transitioning from move-out and move-in days. It would call for the university to charge little to no cost at all to students.

“Sustainability Central” calls for the university to replace all trash-only bins with the combined recycling and trash bins in the Maverick Activities Center, the Commons and College Park Center and labeling the bins’ designated purpose. It also calls for the phasing of outdoor trash-only bins and replacing them as well.

“Apartment Lease Clarity” calls for University Housing to review and revise its apartment lease agreement while taking into consideration the 85% reletting fee that burdens students.

“Commemorating Zeb Strong” calls for the university to display a memorial for Zeb Strong’s legacy.

“What Do We Want?! Free Online Resources!” calls for the university to partner with online educational platforms that are accessible to students, faculty and staff at a low or no cost.