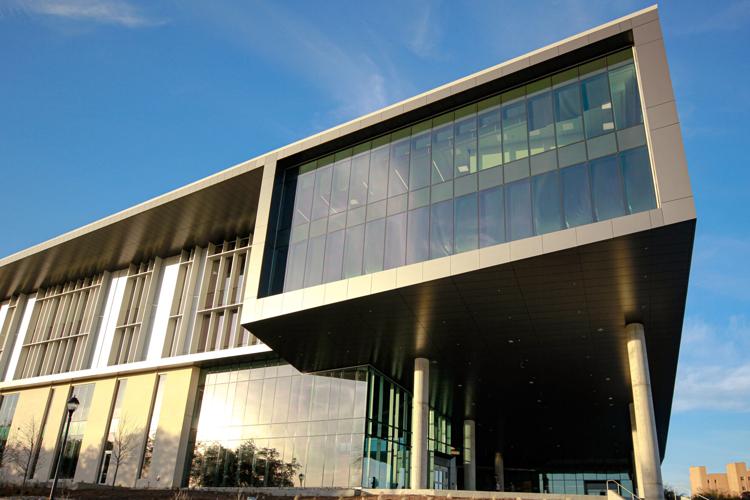 The School of Social Work and Smart Hospital building welcomes students Jan. 18 on West Mitchell Street. The building opened its doors to students and staff member on Jan. 17. 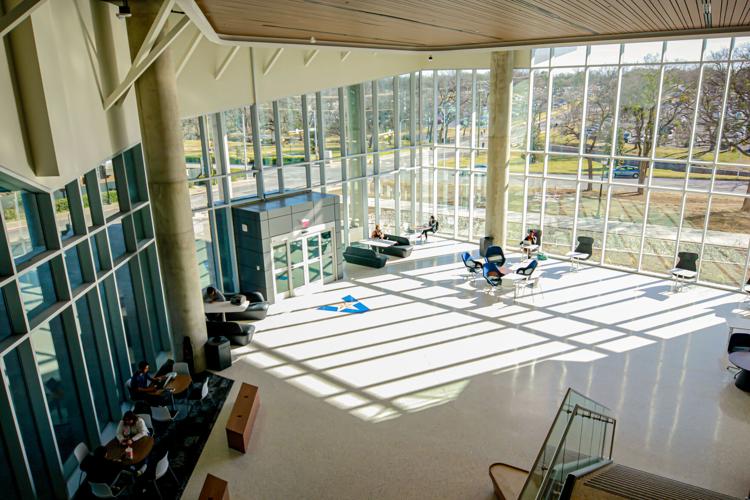 Students hang out between classes on the first floor lobby Jan. 18 at the new School of Social Work and Smart Hospital building. The $76 million project broke ground Feb. 9, 2021.

After nearly two years of construction, UTA’s new School of Social Work and Smart Hospital building became operational on the first day of the spring semester.

The $76 million project houses the School of Social Work and the College of Nursing and Health Innovation’s Smart Hospital, according to the university’s website. While the schools will share areas on all floors, the School of Social Work and general purpose classrooms will take up most of the first, second and fourth floors. The third floor is used for the Smart Hospital.

Faculty members said they expect that having operations for the School of Social Work and the CONHI under one roof will allow the two schools to interact as they would in the real world.

Stephanie Campbell, simulation education and operations manager for CONHI, said she expects the relationship between the two schools will grow.

“If you think about it, in the hospital, nurses work with social workers every day,” said Jennifer Roye, assistant dean for simulation and technology for CONHI.

One of the building’s features is the virtual reality lab on the second floor, which has 10 spaces set up for simulations. It is an immersive virtual environment where students can interact with avatars of patients, nurses or other health professionals, according to previous Shorthorn reporting.

The VR program began last semester with a pilot group of students, Roye said. Although the program is fairly new, she said the School of Social Work has shown interest in using the room for their interprofessional simulations.

This building combines the previous two Smart Hospitals, which were located in different spaces across campus.

The third floor has six new high-fidelity rooms modeled after patient care areas in the hospital. There is a control room in each space for operating the mannequins along with a one-way mirror for student and instructor observations. In the previous Smart Hospital, there was one control room for all six of these rooms.

Art education sophomore Alija Almosawi said her girlfriend is a social work major, so they both came in and looked around on the first day of school. She really likes the lounge and thinks the building is fancy.

Campbell said that some of her faculty members are excited that their students will have the opportunity to observe other rooms and students in the Smart Hospital who may be in different education levels. The new lab rooms have a lot of visibility, allowing passersby to see the students in action.

“Hopefully, it’ll be inspiring for some of our students to see what’s ahead,” she said.

Jessica Davis, marketing manager for the School of Social Work, said that each floor houses large windows to allow light in and has open common areas with room for sitting, studying or hanging out with peers.

“It really offered an immediate sense of the community that they’re trying to build with this new building,” Davis said.

Instructors can teach other types of simulations in the Home Health Suite, a shared space between the two schools on the first floor. Campbell said that this room closely resembles an apartment filled with furniture, a bedroom, a kitchen and a bathroom.

“We could do interprofessional simulations that look at a patient’s home situation, looking at safety, looking at home evaluation, if they need to be discharged home,” Roye said.

Though the building is operational, some of its cosmetic aspects are still being finished.

Davis said she looks forward to the addition of frosted windows in some work areas that will allow for privacy when needed. She’s also excited about the completion of the courtyard that students and faculty can use for studying, breaks or events.

Although she will miss the original building, Davis said she’s hopeful that the location on the new side of campus will put the School of Social Work back into the public eye. She feels that having more foot traffic will allow them to spread the word about what the school does.

Nursing sophomore Victoria Jamodu said she typically studies either in the Central Library or Pickard Hall, but she likes the new building better. The study rooms are her favorite feature of the new building because the tables have outlets, which some other buildings don’t have.

Coming from the old building where they needed a lot of upgrades, they’ll now be able to do a lot more in their classes that they couldn’t do before, Arenas-Itotia said.

“It’s just very exciting to see such a beautiful, well thought out building for our students,” she said. “All of the resources we’re going to have, it’s just an incredible, overwhelmingly excited feeling.”