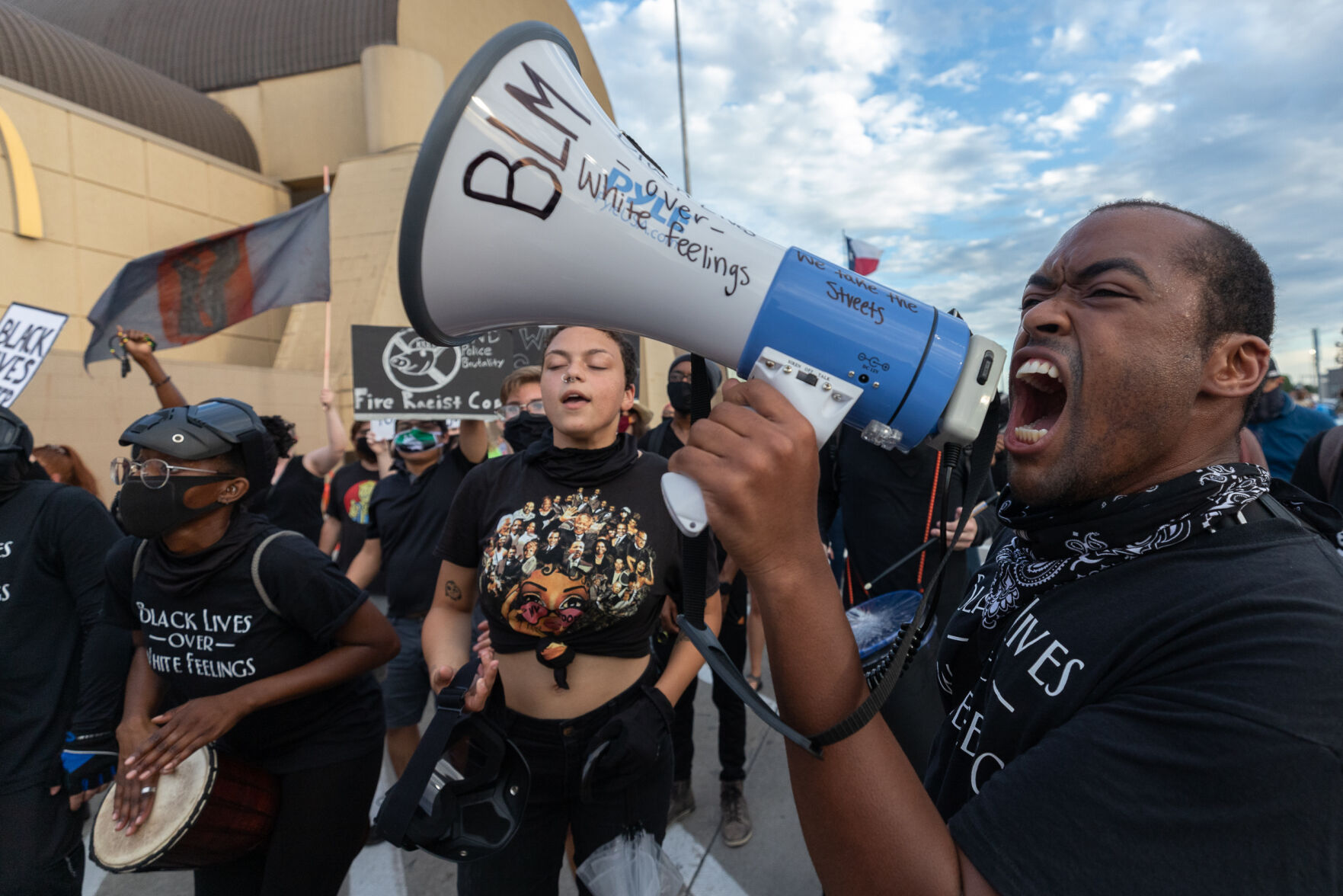 DeSoto resident Jonathan Drake leads a chant at a demonstration against police brutality July 29 in Arlington. Drake joined the group We Take The Streets two weeks after protests began in May. 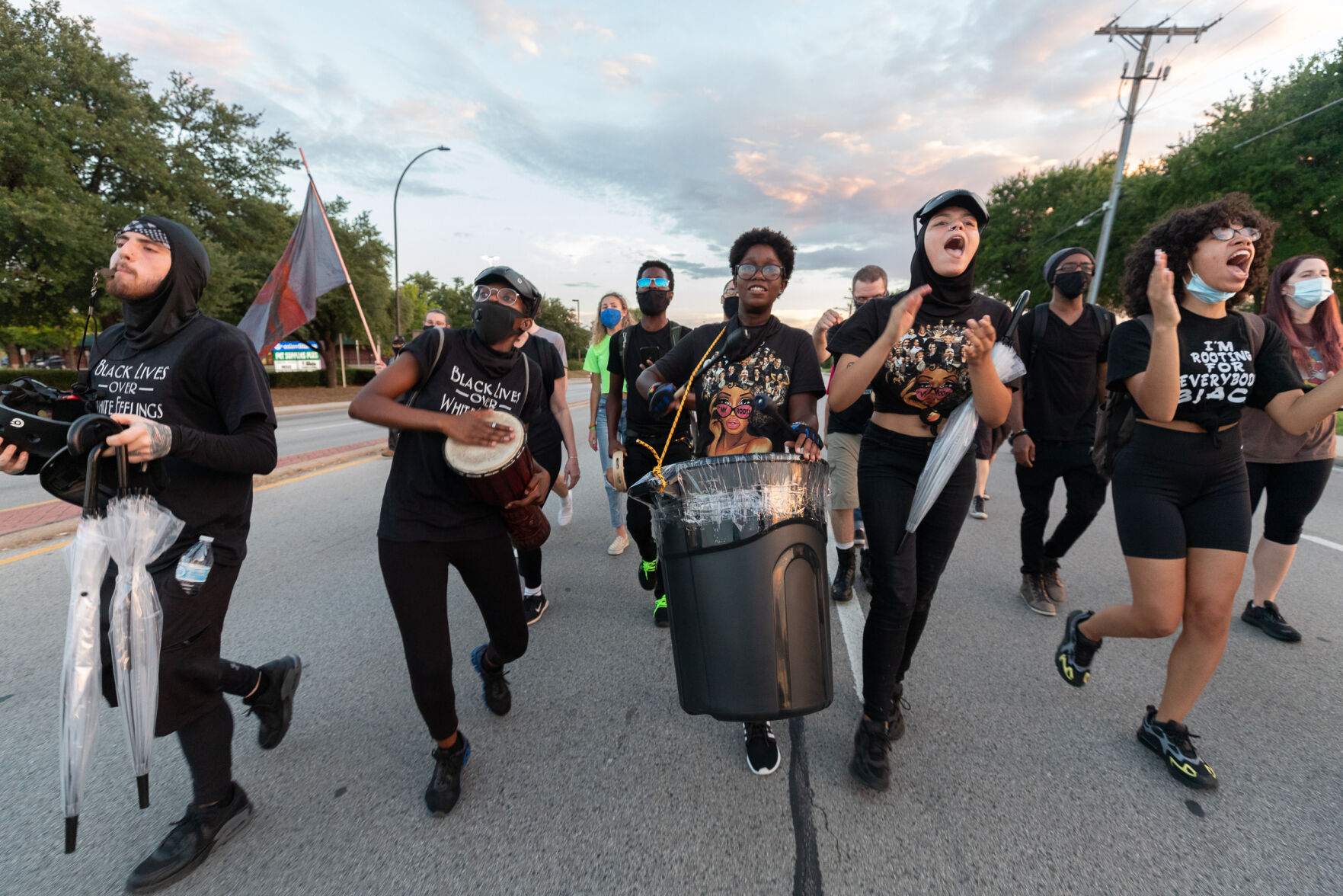 Activist group We Take The Streets marches down Cooper Street during a demonstration against police brutality July 29 in Arlington. The group has organized various protests across North Texas in recent weeks.

Knees bent and head thrown back, DeSoto resident Jonathan Drake belted out the lyrics to “Wade in the Water,” a spiritual song associated with the Underground Railroad and the history of American slavery.

Wade in the water

Wade in the water, children

Wade in the water

The traffic light at the corner of Arbrook Boulevard and Cooper Street flashed green, but traffic had reached a standstill. The intersection was filled with about 50 demonstrators, who surrounded Drake as he led them in song.

As the sunset painted the sky pink and orange, demonstrators sang and danced in protest of police brutality and racial injustice.

Five demonstrators kept the rhythm going by beating makeshift trash can drums and djembe drums. When the group wasn’t singing, they were clapping their hands in sync and shouting common Black Lives Matter chants.

“Say their names! Which one?”

Drake said the dancing and singing was an intentional strategy to catch people off guard while still peacefully protesting racial injustice. Many people expect protests to end in violence, but Drake said peace and songs can communicate just as strong of a message.

“It’s healing for me,” he said. “It’s more of a celebration of the fact that we have the power to make our voices heard how we want to.”

Although he’s disappointed racism is still such a prevalent issue in America, Drake said he’s glad he can protest even amid a pandemic. Racism is its own pandemic, he said.

Demonstrators went in through different entrances to avoid security before gathering to rally against police brutality and racial injustice. They were escorted out and banned for a year.

We Take The Streets, an activist group dedicated to Black lives, organized the demonstration Wednesday evening. Drake, a member of the group, said the organization has protested against police brutality every day for the last 62 days.

He continues to protest because he can no longer tolerate racism in America.

“I need to be out here,” Drake said. “I need to make my voice heard and say that this is not okay.”

Around 6 p.m., members of the group and other Metroplex residents met in front of Ross in Bardin Place Center.

To protect their identities, many protesters arrived dressed in all black with full coverings to hide their faces, and many wore makeshift body armor. Two demonstrators arrived carrying assault rifles, while others carried homemade shields and makeshift bats.

Nevertheless, the protest remained peaceful, and Arlington Police officers followed the group in patrol cars and motorcycles, blocking traffic as they passed each intersection.

For about four hours, the group marched roughly five miles through Arlington, stopping at various locations to sing, dance and chant. After leaving Ross, they marched through a Chick-fil-A drive-thru at the intersection of Bardin Road and Cooper Street, then proceeded to enter a Walmart on South Cooper Street. As the night progressed, they walked the west-bound service road to Interstate 20 before ending the protest back in front of Ross.

A group of 50 protesters are marching around a Chick-fil-A in south Arlington. The group is chanting “All lives can’t matter until Black Lives Matter.” @UTAShorthorn pic.twitter.com/06rnLhzOID

The protest was met with mostly positive support from passing cars and shoppers. Pamela Hill, African American studies adjunct professor, was shopping in Bardin Place Center when she noticed the demonstrators and decided to join.

Her first thought: “Let me go and see what I can do.”

Hill followed behind the group in her vehicle and three other demonstrators followed in their own vehicles, acting as shields from traffic and anything else that could potentially harm the protesters on foot.

“It’s a college town,” she said. “This should happen in every college town. We're supposed to teach our young people how to be leaders, how to be bold.”

The group was mostly young people, and many of them wore shirts and carried signs bearing messages against police brutality and racial injustice.

Throughout the protest, Arlington resident Dequan Johnson carried a large gray flag that read “We Take Arlington.” He said he joined the demonstration to commemorate the deaths of Black men at the hands of police officers across the country.

Johnson’s shirt said “Justice for Ahmaud,” whose death resonated especially deep for him. Ahmaud Arbery was a 25-year-old Black man who was shot and killed while out jogging in Georgia. Johnson said he jogs through Arlington three or four times a week, and the thought that he could also be killed while jogging simply because of his skin color scares him.

The thought that so many people don't even care scares him more.

“This country is apparently okay with it,” he said. “Every time it happens, the judicial system does not want to prosecute the racists who are shooting us down because of the color of our skin.”

The front of Drake’s shirt read “Black lives over white feelings,” which he wore in protest of white people policing Black people’s feelings and motivations. White people can’t and shouldn’t try to tell Black people how to grieve or how to retaliate, he said, because Black people don’t need their permission to stop tolerating racism.

“A protest with permission is just a parade,” he said.

Cameron Thompkins, Fort Worth resident and member of activist group No Sleep for Justice, said it’s his mission to protest every day until Black lives are valued the same as white lives.

G Willickers Pub reopened with hundreds of other bars as part of Freedom Fest, a statewide protest against Gov. Abbott’s shutdown orders.

He said the Black Lives Matter movement is often portrayed as a “white vs. Black” situation. However, it must become a unified effort to create change. Although Black people experience the brunt of racial injustice, all people cause it, he said.

“Everyone is racist,” he said. “There’s no one who does not have a prejudice, a judgment or a racial tendency. It’s just too deep in America.”

Racism may never end, but Thompkins said it can become manageable. And the first step in managing it is continuing to protest.

Photos: Activist group We Take The Streets holds march through Arlington in third month of protests

The march was the latest of many demonstrations denouncing systemic racism in the aftermath of the killing of George Floyd on Memorial Day more than three months ago.