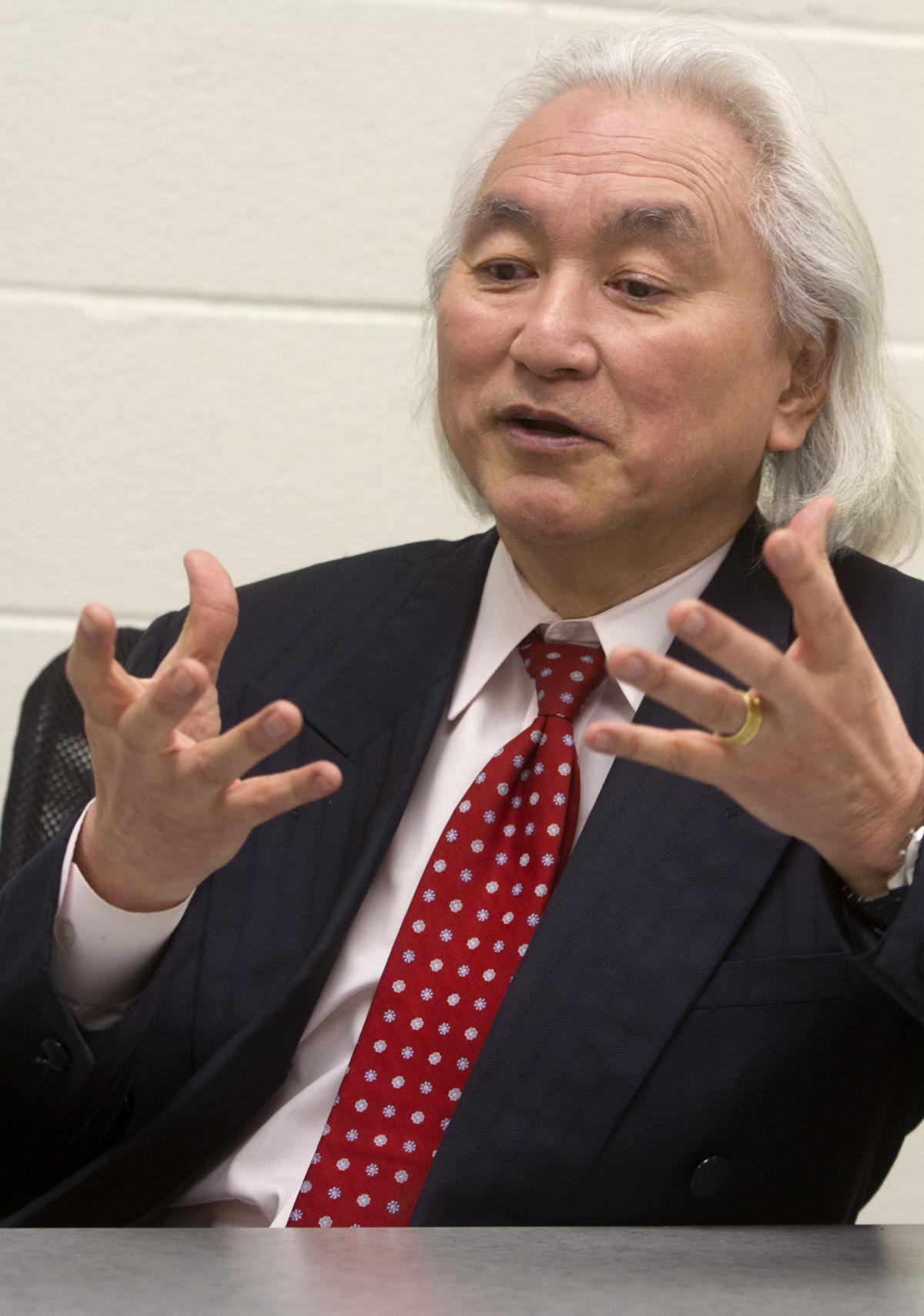 Theoretical physicist Michio Kaku talks about his experiences and research during an interview Thursday inside Texas Hall. 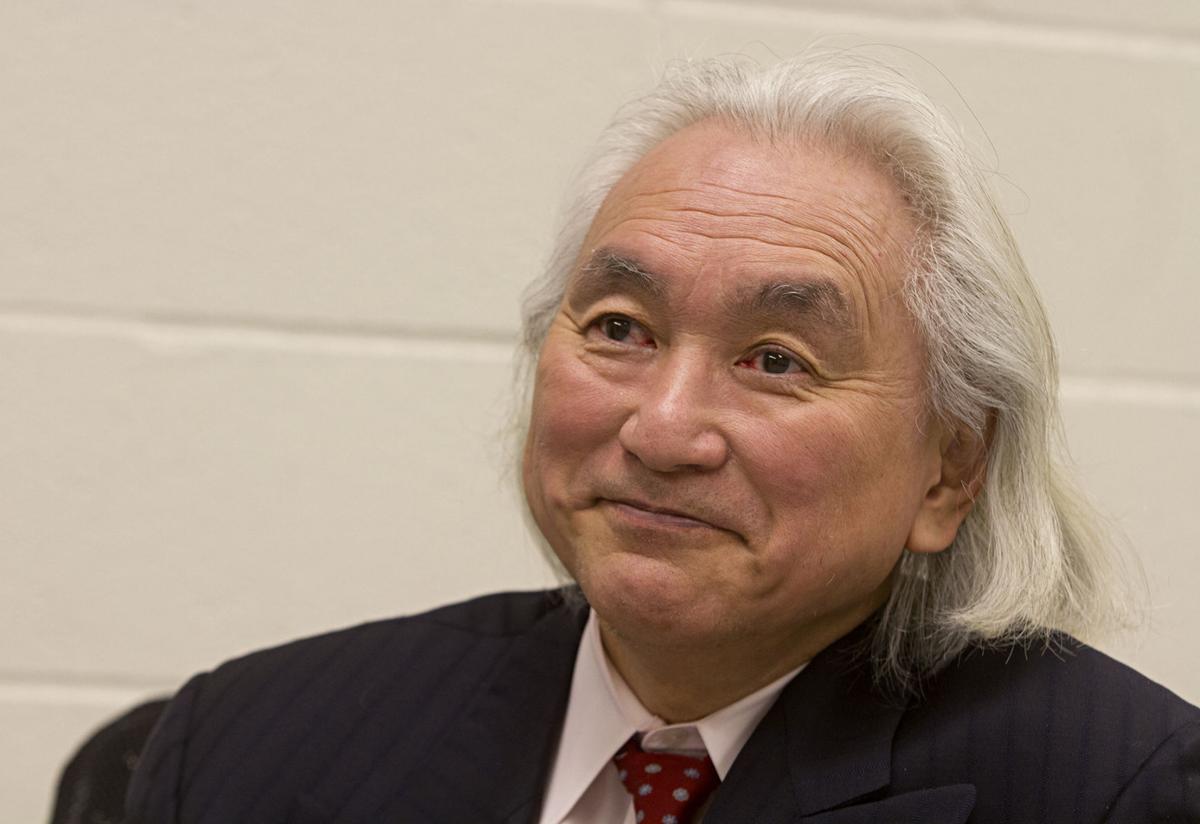 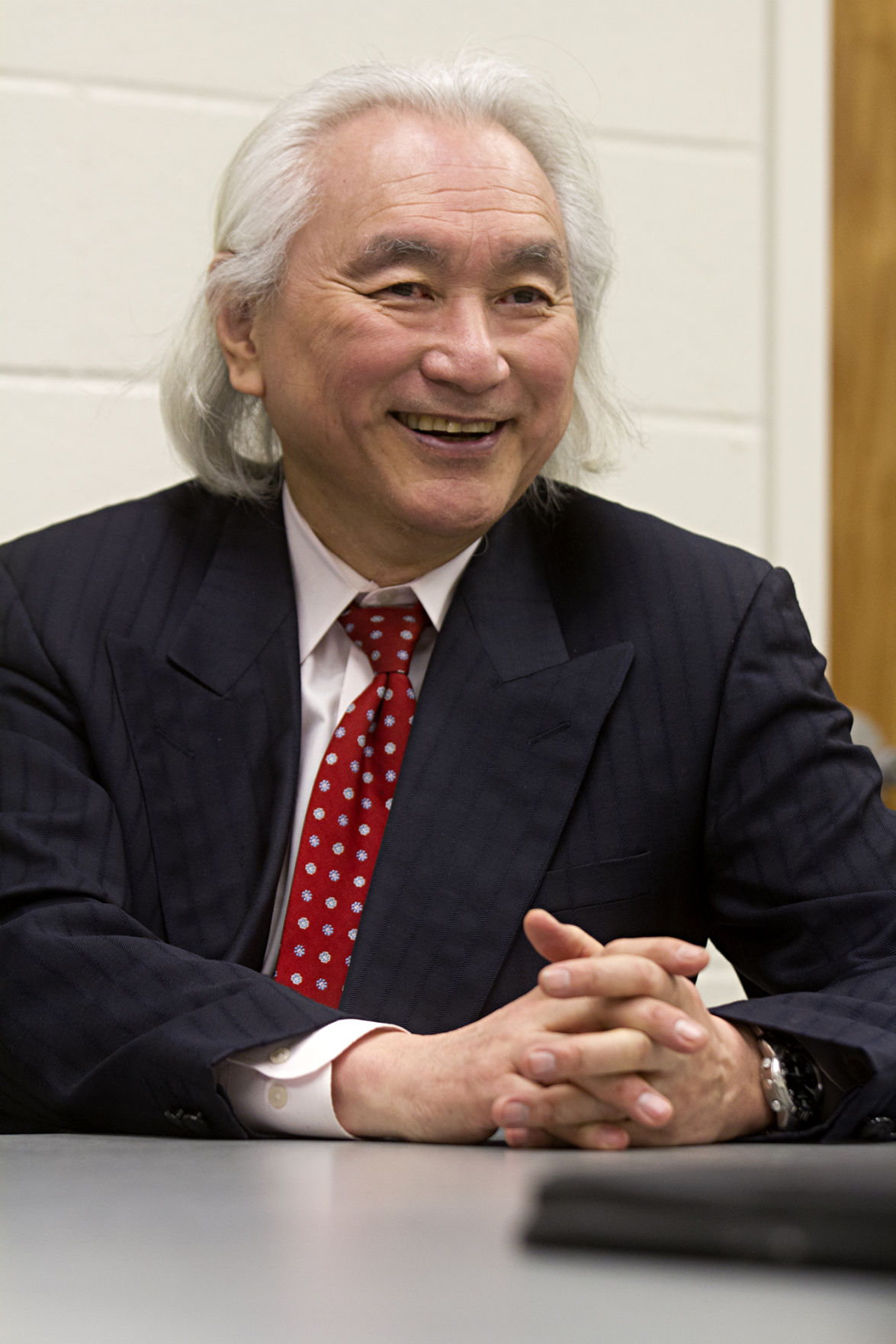 Theoretical physicist Michio Kaku spoke about his research and many other topics during an interview before the Maverick Speakers Series on Thursday inside Texas Hall.

Theoretical physicist Michio Kaku talks about his experiences and research during an interview Thursday inside Texas Hall.

Theoretical physicist Michio Kaku spoke about his research and many other topics during an interview before the Maverick Speakers Series on Thursday inside Texas Hall.

Theoretical physicist and author Michio Kaku spoke at UTA in a sold out Maverick Speakers Series lecture on Thursday. Kaku is known for his appearances on the Science Channel, and his continuing work on Einstein’s unified field theory. Before taking the stage, Kaku spoke with The Shorthorn in an interview about his experiences as a burgeoning scientist, his thoughts on the unanswered questions of science and his biggest fear for the future of humanity.

The Shorthorn: There is a story that, while you were in high school, you built an atom smasher in your garage. What drove you to take on that project?

Michio Kaku: That’s right. Ever since I was 8 years old, I was fascinated by the fact that Einstein could not finish his greatest work. What could be so hard? So I wanted to be part of this great mission to complete the theory of everything, which of course is the basis for an Oscar nominated movie, The Theory of Everything. I said to myself, “That’s for me.” But I had to do something, to be worthy of the theory of everything.

So, when I was 17 years old, I went to my mom and I said, “I’m going to build an atom smasher in the garage.” So she said, “Sure! Why not?” I assembled 400 pounds of transformer steel, 22 miles of copper wire and I built a 2.3 million electron volt betatron particle accelerator in the garage. It consumed all of the energy in the house, blew out all of the circuit breakers every time we turned it on. And my mother would say, “Why can’t he find a nice Japanese girlfriend? Why does he have to build these gigantic machines in the garage?” But you see, that got me a scholarship to Harvard. Can’t complain.

It earned the attention of a physicist, Edward Teller, father of the hydrogen bomb. He took an interest in me, and arranged for me to go to Harvard and to pursue my professional career. Now he of course wanted me to work on hydrogen bombs, so when I was applying for grad school, he made a big play for me to work at Los Alamos National Laboratories, working on hydrogen warheads. But you see, I wanted to work on something bigger. A hydrogen bomb, for me, was puny compared to the Big Bang – the creation of the universe. That’s what I really wanted to work on – the nature of the universe itself, and that’s what I do for a living.

TS: Several years ago, Texas was almost home to the Superconducting Supercollider, but these plans were scrapped. With the success of the Large Hadron Collider, what can the U.S. do to bring back these types of technology and research?

MK: Dallas was supposed to be the Vatican of physics, now it’s Geneva, Switzerland. All the publicity of the Higgs-Boson, the Large Hadron Collider, the theory of everything, all that publicity is going to Europe. And why? Well, Congress gave us a billion dollars to dig the hole, this gigantic hole. Bigger, much bigger than the hole in Geneva, Switzerland. Then they canceled the machine and gave us a second billion dollars to fill up the hole. Two billion dollars to dig a hole and fill it up. That is the wisdom of the United States Congress and it really makes you wonder: Is there intelligent life on the Earth? Certainly not in the United States Congress.

TS: What can we do to pull those technological advances back to the U.S.?

MK: Well, the Large Hadron Collider found the Higgs-Boson. Next will be dark matter. We want to create dark matter in the laboratory. So already now, different nations are competing for the next machine. The next machine may be a linear collider, we’re not sure. Japan has already said that they would like to host the next machine, beyond the Large Hadron Collider. Now for us, it means that our machines are old. We have an old machine at Brookhaven Long Island, another one at Fermilab. They’re old, and they may be shut down. The Congress is always tinkering with the idea of shutting down our great set of national laboratories, because all the thunder now is going to Switzerland. Which would be a shame, because we lost a generation. A generation of physicists was lost, because of the lack of funding here.

TS: What do you see as the most important, unanswered questions in science?

We’ve learned more in the last 15 years about the brain than in all of human history combined. Think of all the nonsense you had to learn in psychology courses. None of which was testable. None of which was measurable. We had behaviorism, Freudian psychology, all of these theories that you learn in psychology. Totally untestable. Now, we can test it, because physics allows us to calculate energy flows in the brain. From that, we can actually construct pictures of what you’re thinking. I can actually put you in an MRI machine, and you can see me and I’ll have the computer print out a picture of what you are looking at. That’s what we can do. So telepathy, telekinesis, recording memories, uploading memories, we can do it now. All this stuff you see in science fiction movies like The Matrix, Star Trek, we can do on a small scale, many of these things in the lab. And it’s all because of physics.

TS: What scares you the most about the future?

MK: I think we’re headed for what is called Type 1 Civilization, planetary civilization. Type 2 would be stellar civilization, like Star Trek. Type 3 Civilization would be galactic, like Star Wars. We are Type 0. We get our energy from dead plants, oil and coal. But we are about 100 years from being Type 1, and the question is: Will we make it? Will we make the transition from Type 0 to Type 1? It’s not clear.

we have reached the age of star trek
https://www.youtube.com/watch?v=_zpsEO5t-TM&feature=player_embedded

I'm very interested in Dr. Michio Kaku's work and I like reading about the things that he works on. I'm not a a man who knows alot but a I like to learn about space and the universe and black holes. Thank you Michio for your information on all these things. [cool]

Please remember what Albert Einstein said about how he came up with the theories he came up with that stimulated our curiosity.He said " I thought of how God would have done it" we must always consider a designer as we can not disprove one.

ALWAYS ONE STEP BEHIND AND ONE DIMENSION BACK. THE UNIFICATION THEORY ALLUDED EINSTEIN BECAUSE SACRIFICES WOULD HAVE TO BE MADE BY UNDERSTANDING WE ALL ARE ONE HERE AND THERE AT THE SAME TIME. WE ARE IN AN ANIMATED HOLOGRAPHIC AREA PRACTICING THE CHANCE THAT FREEDOM CAN INSPIRE A CIVILIZATION. A HEAVEN IN A 3 DIMENSIONAL EXISTENCE. WHEN WE PUT US AS A WHOLE FIRST WHEN WE MAKE ANY DECISION . BECAUSE FREEDOM TO CHOOSE ,HOW TO DECIDE IS OUR ONLY TRUE FREEDOM. LET US ALL BE ONE.......

THE UNIVERSE HAS AN ORIGIN ONLY IF YOU THINK OF THE TASK TO FINDING THE REASON IT IS ALIVE. IF EINSTEIN WAS ALIVE HE WOULD SAY THE SAME THING TO HOW HE CAME UP WITH THE THEORIES HE CAME UP WITH THAT SO VEXED OUR CURIOSITY,HE SAID " I THOUGHT HOW GOD WOULD HAVE DONE IT" ITS THE GOD PART WE FORGET TO UTILIZE AS WE EQUATE. JUST REMEMBER IF YOU WISH TO BE GOD YOU MUST ALWAYS CONSIDER WHAT HAPPENED TO THE FIRST ONE THAT WISHED FOR THAT.

dr.kaku's analysis that blames the failure of the superconducting supercollider on congress falls one step short of arriving at the actual cause. the real reason is that no one wants to pay taxes. we simply can't afford sending the world's largest military everywhere to defend corporate interests, any reasonable level of social programs, and world class science, all while politicians pander for votes with a non-stop litany of how they'll reduce everyone's onerous taxes. if america wants first class science, everybody's going to have to get out the checkbook.

Michios book The Future of the Brain is worth the read. Gets a little out there at the end. :-)

It's great that US lost the particle accelerator project. Now CERN is a senter for innovation and international collaboration. US is of course a great contributor.... What would a US only physics centre be like? It better be CERN :-)