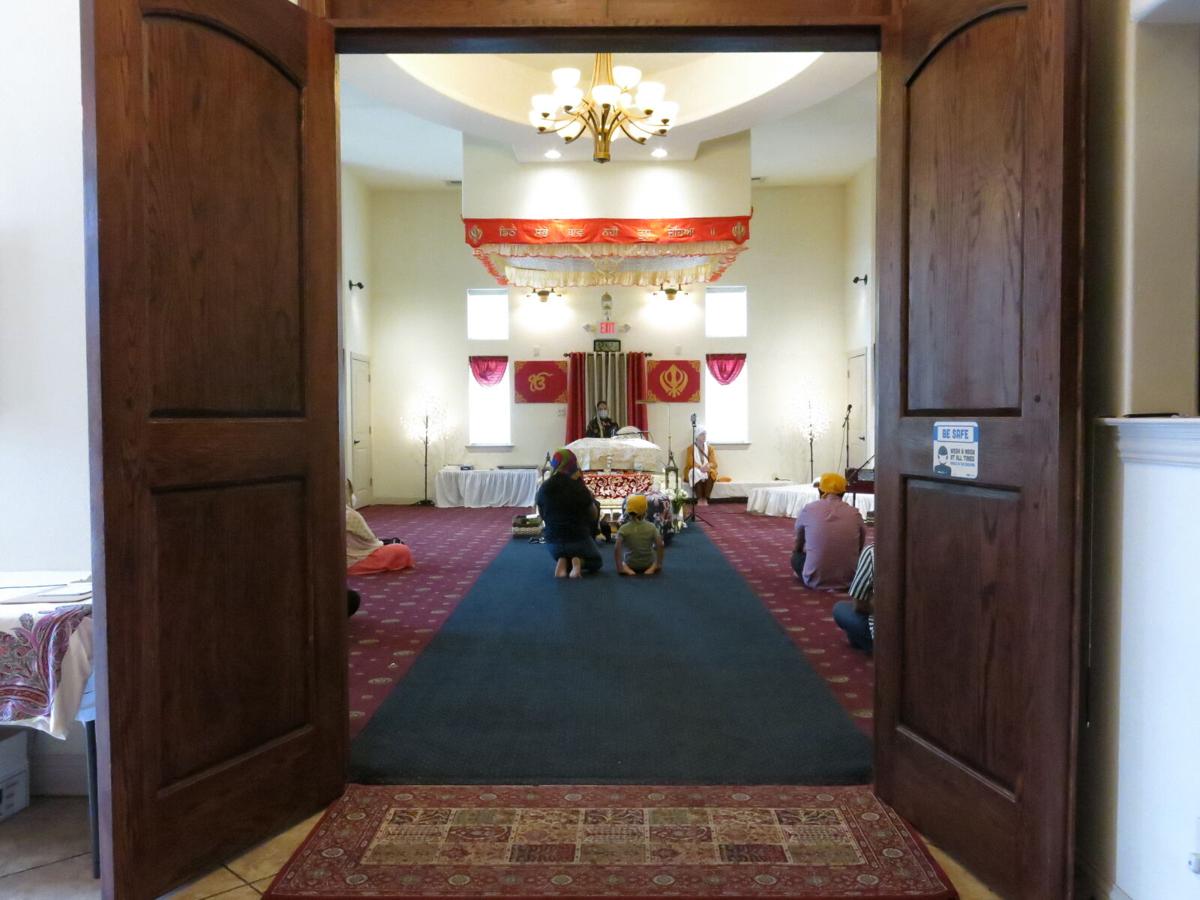 Attendees pay respect during a Sunday service Sept. 5 at Gurdwara Nishkam Seva in Irving. Wearing turbans is one of Sikhism's religious article. 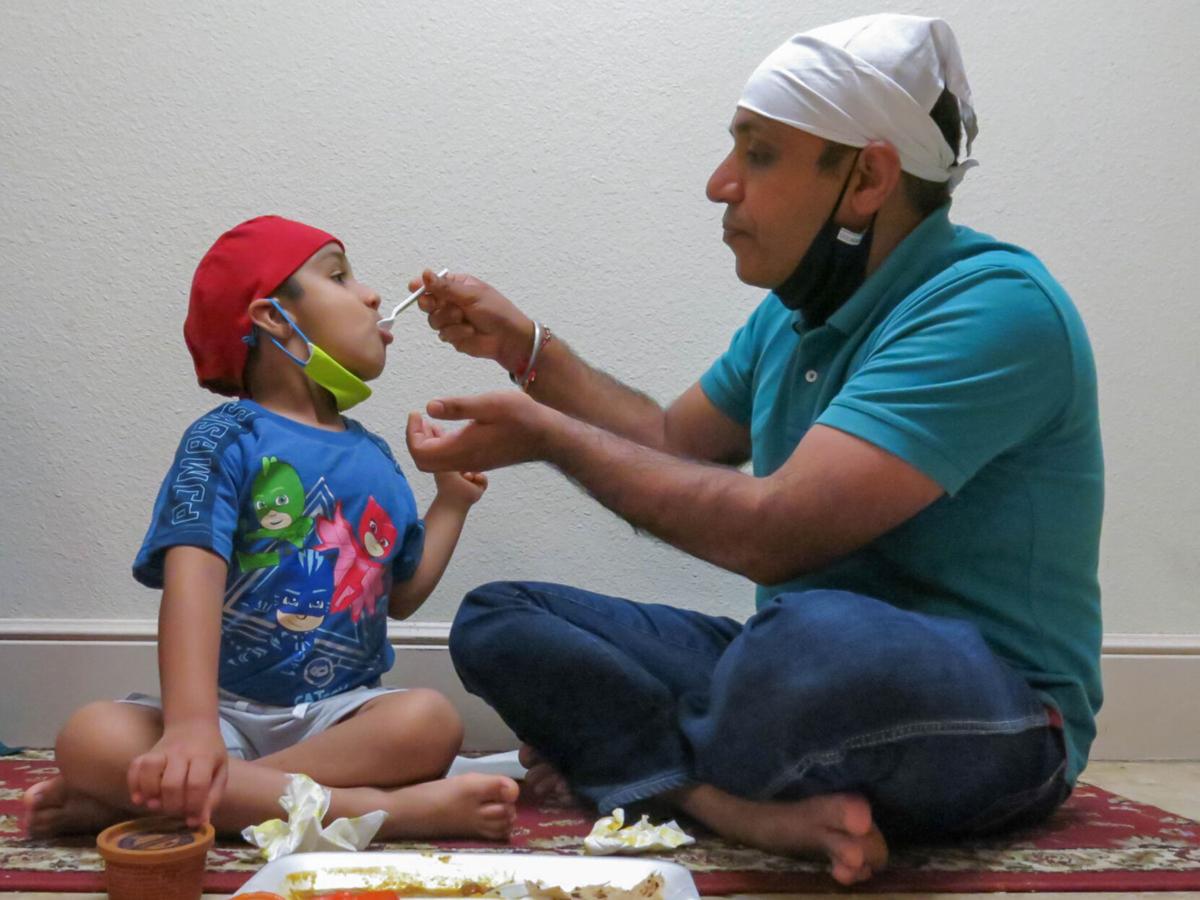 Irving resident Nitin Khurana, 37, and his son Yagat Khurana, 5, enjoy a meal after a Sikh Sunday service Sept. 5 at Gurdwara Nishkam Seva in Irving. Weekly Sunday service is held from 11:30 a.m. to 1 p.m. and Langar, or free community meal, is served after the service. 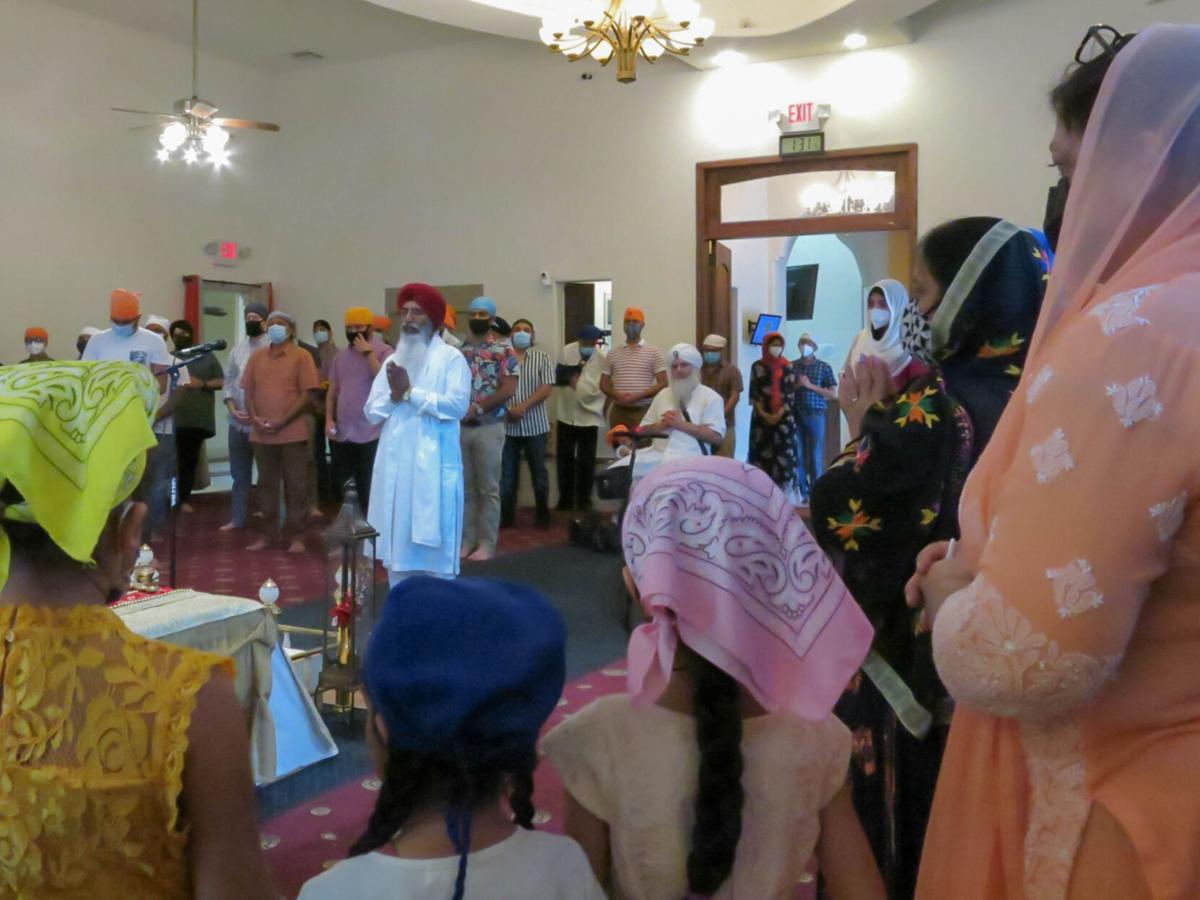 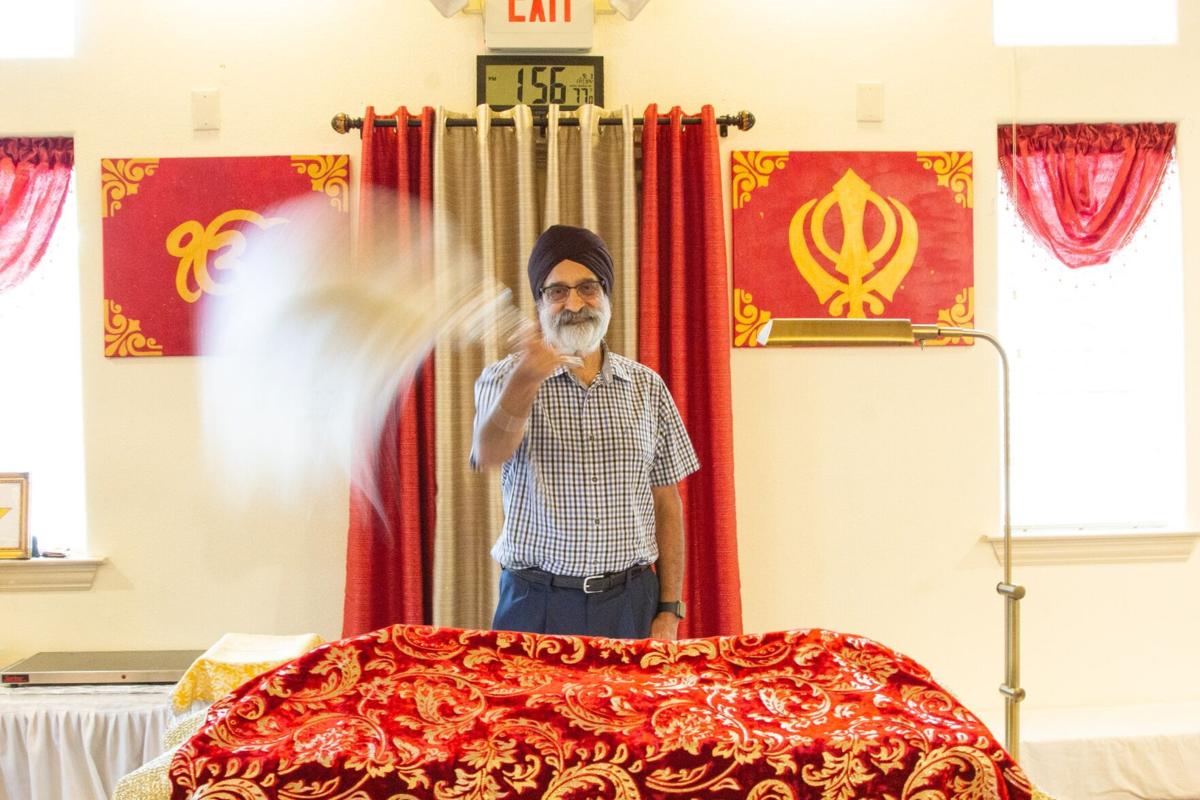 Harbhajan Singh waves the Chaur Sahib over the Guru Granth Sahib, or the Sikh scripture, to show respect and commitment Sept. 3 at Gurdwara Nishkam Seva in Irving. The ceremonial cloth, Rumala Sahib, covers the Sikh scripture.

Attendees pay respect during a Sunday service Sept. 5 at Gurdwara Nishkam Seva in Irving. Wearing turbans is one of Sikhism's religious article.

Irving resident Nitin Khurana, 37, and his son Yagat Khurana, 5, enjoy a meal after a Sikh Sunday service Sept. 5 at Gurdwara Nishkam Seva in Irving. Weekly Sunday service is held from 11:30 a.m. to 1 p.m. and Langar, or free community meal, is served after the service.

Harbhajan Singh waves the Chaur Sahib over the Guru Granth Sahib, or the Sikh scripture, to show respect and commitment Sept. 3 at Gurdwara Nishkam Seva in Irving. The ceremonial cloth, Rumala Sahib, covers the Sikh scripture.

Four days after the 9/11 attacks, on Sept. 15 in Mesa, Arizona, Balbir Singh Sodhi was shot and killed because the murderer thought he was a Muslim. But Sodhi was a follower of Sikhism, a monotheistic religion of India.

The incident sent terror through the Sikh communities across the nation, said Harbhajan Singh, director of Irving’s Gurdwara, or a Sikh place of worship.

Singh’s two sons wore turbans like him, and he instructed them to avoid confrontation when faced with racist remarks. Out of fear, he came up with a plan for his family.

“We said we have to be careful and perhaps if we do go out, let’s go out together,” he said.

In the aftermath of the 9/11 attacks some Americans mourned the victims while others demanded vengeance. And then there’s the other group of Americans, the Muslims and Sikhs, who faced a wave of discrimination after their religions were associated with the attacks.

Singh said people yelled and called him Osama bin Laden and asked him to go back to where he came from just days after 9/11.

He was scared because he dons a turban and has a beard, and the media gave the impression that all extremists dressed like him, he said.

The anti-Sikh sentiments remained more than a decade after 9/11. In 2012, a gunman shot and killed six people at a Sikh temple in Oak Creek, Wisconsin.

In 2015, after four years of the coalition’s advocacy effort, the U.S. government put in place a system to track hate crimes motivated by anti-Sikh bias.

The Sikh Coalition originally brought the issue to the U.S. Attorney General in 2011. By 2013, the Attorney General announced the FBI would begin to track hate crimes against Sikhs and other minority communities. Two years later, the FBI released a training manual that included guidelines for tracking Sikh-related hate crimes.

The wave of post-9/11 religious hate crimes made Singh worry about Sikhs in America. He said there are people who feel that Sikhs don’t belong to this country.

“Even if we look different, we’re still American, we still hold the same values, and we still will fight for this country if need be,” he said.

Singh collaborated with the Irving Police Department in 2018 to conduct defensive workshops on how to handle people who try to commit hate crimes in places of worship.

“We always feel that there may be people out there in the community that want to do us harm,” he said. “So we take extra precaution and we keep aware of what is around us.”

Because he is an activist in the Metroplex, other Sikhs came to him to share their fears after being followed or harassed, he said.

Irving resident Varun Arora attends the Irving Gurdwara and said he also experienced comparisons to Osama bin Laden. People often associate his Sikh turban with bin Laden’s even though they are different, he said.

He didn’t know how to handle the racist comments when he first heard them, he said. But he has learned over time with more encounters.

If the harassers are willing to listen, he will try to educate them. If not, he brushes their comments aside, Arora said.

Nahela Morales is a co-founder of Embrace, an initiative that serves the Muslim convert community nationwide. She oftentimes had to explain to people that she had nothing to do with 9/11, she said.

Morales, who was born in Mexico City and raised in California, moved to New York City in July 2001. She did not understand what was going on when 9/11 happened. She had never heard about Islam and didn’t know any Muslims. Besides confusion, 9/11 also sparked her curiosity in Islam.

So she bought a Quran and began to study Islam, she said. It took several years before she officially converted on the last day of Ramadan in 2007.

But her conversion came with a price.

She lost friends along the way, received backlash from her Catholic family when she visited them in Mexico, and her employer fired her because she wore a hijab, she said.

She said she’s experienced people commenting on her hijab in Spanish, on how dirty, hot and sweaty she must be under it, with no clue that she speaks the language.

Before 9/11, anti-Muslim bias incidents were the second least reported, according to a FBI Uniform Crime Report. But in 2001, they became the second highest reported among religious-bias incidents, growing by more than 1,600% from the year before.

There were 127 reported victims of aggravated or simple assault in 2016 compared with 93 in 2001, according to a Pew Research Center analysis.

More than half of the hate crimes in the country went unreported to police between 2011 and 2015, according to a special report from the Bureau of Justice Statistics. The most common reason was because it was handled privately or through a non-law enforcement official such as an apartment manager or school official.

“Islam was hijacked just the same way those planes were hijacked,” Morales said.

One group of individuals does not represent an entire religion and the entire population of 1.8 billion Muslims, she said.

“Sikhs are not Muslims, but we don’t want any community, including the Muslim community, being targeted because most Muslims are good people, and it was the terrorists that did that,” he said.

This is a very basic article. The author does not know any muslims. Give us a rundown on the 13th Imam. You'll see why the Catholics were upset when the poor girl converted. Also, the author doesn't even know where Sikhs derived. They were formed as a response to Islamic Terror in India hundreds of years ago. They literally formed to fight against Islamic hate. Relating Sikhs and Muslims is a disgusting slap in the face. We need to combat radicalism by exposing it. We need a draw Mohammed contest in the central library. I'll start by showing his marriage to 9 year old Aisha, yes he was a pedo.

Dude, you're borderline schizo-posting. Get help and be respectful to people that aren't WASPs