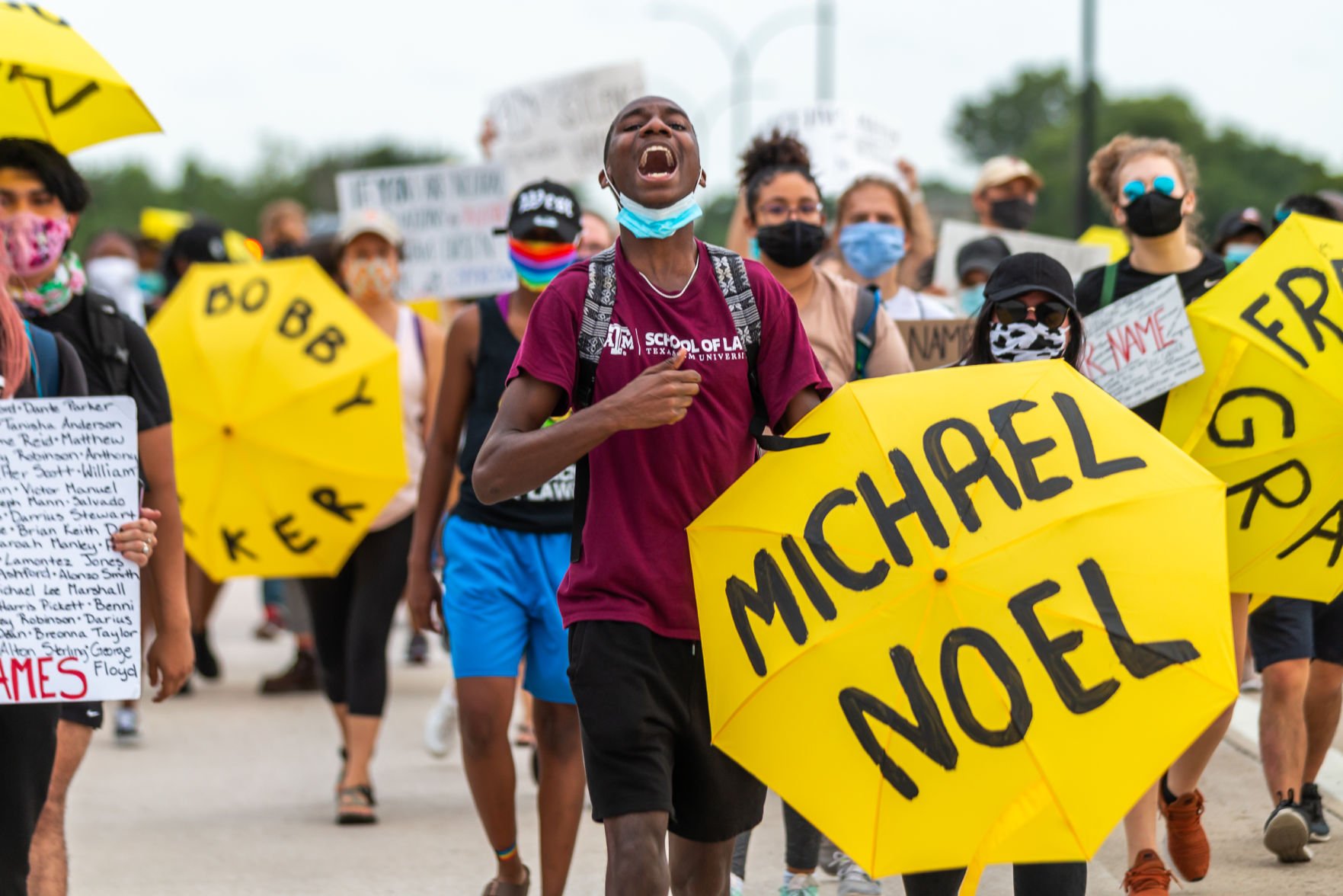 Pre-law junior Zander Green marches in the street during a protest against police brutality June 28 in Arlington. Green is the cousin of Christian Taylor, a 19-year-old college student who was shot and killed by Arlington police officer Brad Miller on Aug. 7, 2015. 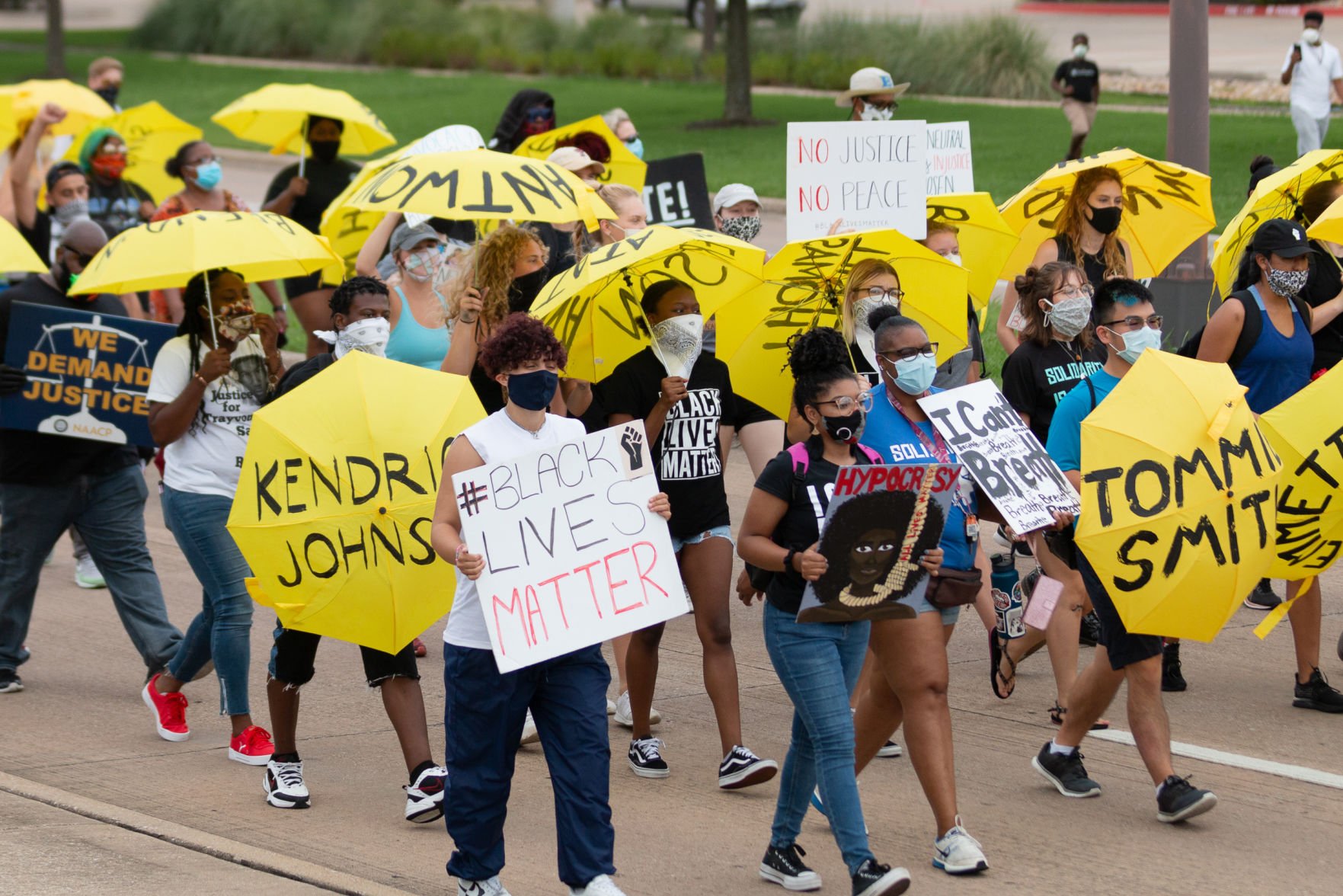 Demonstrators hold yellow umbrellas with the names of police brutality victims painted on them during a protest June 28 in Arlington. The protest was sparked by the death of George Floyd, a 46-year-old Black man who died in police custody May 25 in Minneapolis, Minnesota. 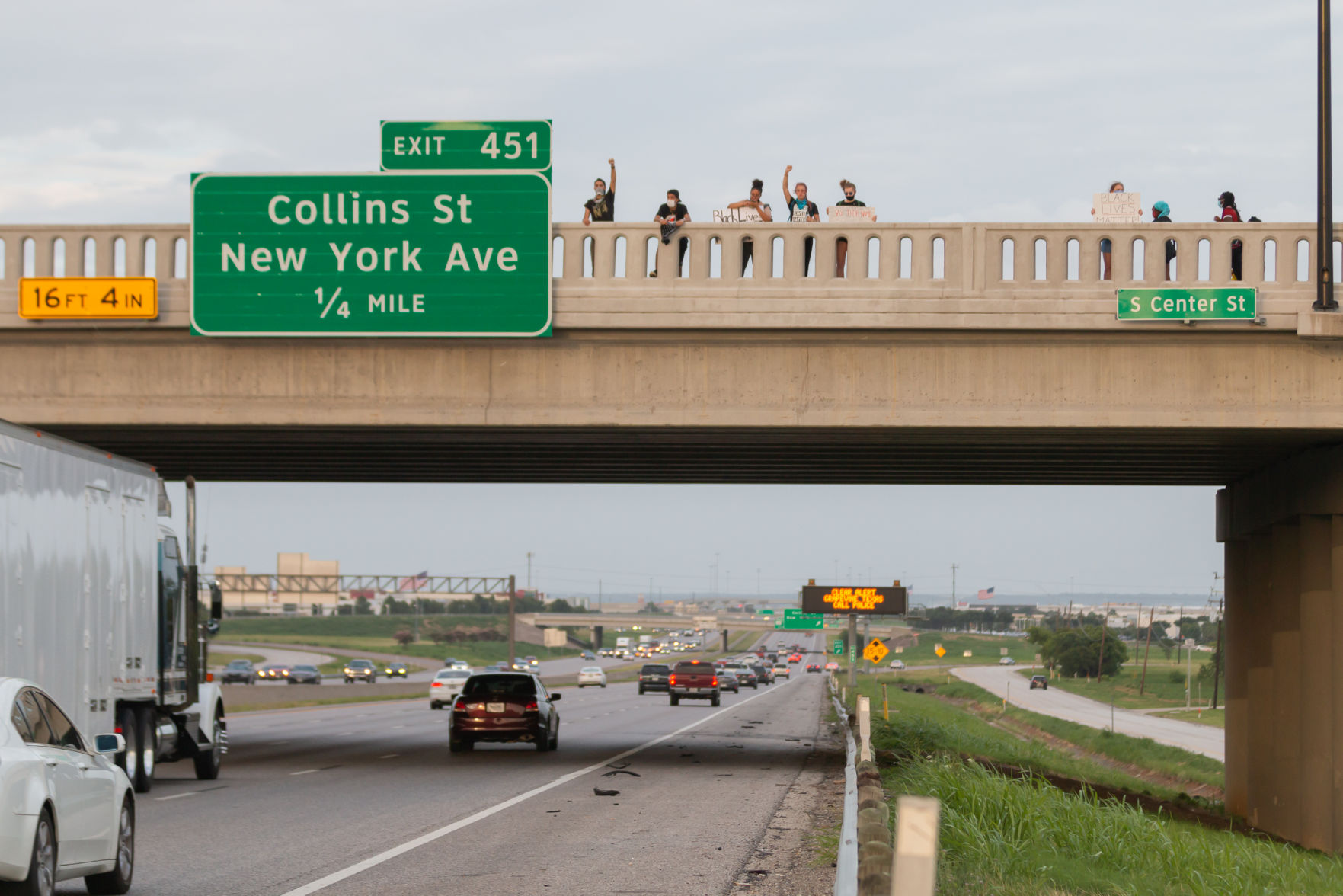 Demonstrators stand on the South Center Street bridge during a protest against police brutality June 28 in Arlington. Attendees held signs and marched through the streets to advocate for racial equality. 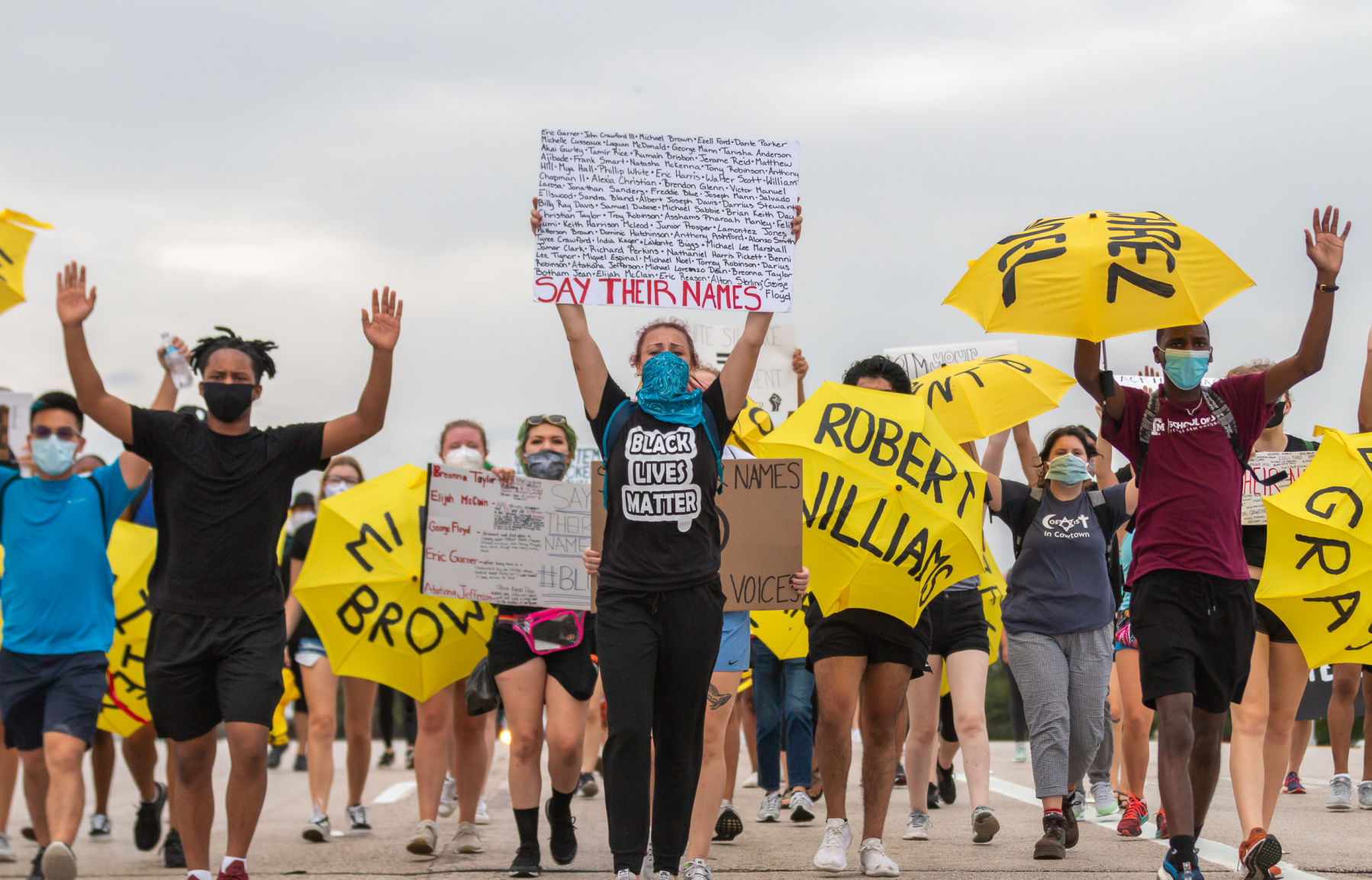 Pre-law junior Zander Green marches in the street during a protest against police brutality June 28 in Arlington. Green is the cousin of Christian Taylor, a 19-year-old college student who was shot and killed by Arlington police officer Brad Miller on Aug. 7, 2015.

Demonstrators stand on the South Center Street bridge during a protest against police brutality June 28 in Arlington. Attendees held signs and marched through the streets to advocate for racial equality.

Yellow umbrellas with the names of police brutality victims written in black created a canopy over a group of around 60 people, chiefly young adults, as they made their way down the streets of the Arlington Highlands on Sunday.

This protest is one of hundreds nationwide that mark the fifth consecutive week of demonstrations against police brutality following the death of George Floyd.

For pre-law junior Zander Green, one name stands out from the rest.

His cousin, Christian Taylor, a 19-year-old Black man, was shot and killed by an Arlington police officer in 2015.

Green said he remembers how genuine Taylor was and how he could go to him for anything. Taylor, who played football for the Angelo State Rams, would play football with Green and was always willing to teach him anything.

He said Taylor is constantly on his mind, not just at protests but all the time.

Green came out to Sunday’s protest because it was what he felt he should do. In order for change to happen, it needs to start with protests, he said.

This was the second demonstration Arlington resident Tatum Henderson has organized in recent weeks. It took about two weeks to plan, and she had to contact two different deputies along with Mayor Jeff Williams beforehand.

Consistently showing up and taking to the streets shows the seriousness of the movement, Henderson said.

“People see that we’re not going to back down,” she said. “We’re not just going to sit and let the injustices happen.”

As the group turned onto Matlock Road, Arlington resident Carrington Sneed led a chant shouting, “This is what community looks like.”

Sneed walked toward the front of the group alongside Henderson, who held a white sign, and Green, whose fist was raised.

Sneed said now more than ever the younger generation has the opportunity to enact change to the system.

Along the way, cars passed by on the opposite side of the road, honking in support. Some slowed down and stopped to video the group, fists raised in solidarity with the protesters.

As the group passed by neighborhood houses, residents peered over their fences, some cheering on the protesters.

Toward the end of the march, Green stopped and asked if he could tell the group about Taylor.

In an emotional speech, Green told the crowd how his family was never the same after his cousin’s death.

“I can’t walk and think the same ever again,” he said.

Green called on the crowd to fight every day for justice, not just for Taylor but for every name on the yellow umbrellas.

“It doesn’t just start with one name, but it ends today!” Green yelled, starting a Black Lives Matter chant with tears in his eyes.

Those are not all police brutality. Students need to look at facts

You wouldn't believe how dumb some of the students are at the university. Walking across crosswalks while staring at their phones. Then, telling the professors that the material is too hard and always looking for an excuse not to put in an effort. The lack of motivation and innovation is apparent by the appalling lack of enthusiasm of the students. It's not all their fault though. They're getting raped by loans they can't default on because society lied to them and said they couldn't be successful without a degree. Also a PhD doesn't equal intelligence. It used to, but it doesn't anymore and that's a shame.

UTA was the first college I ever got an F on a philosophy test. When you don't agree with the professor on the fundamental basis of life, you won't "achieve" higher grades. When you create subjective tests that reward conformity instead of investigation for the basis of facts you fail to foster the next generation's ability to think clearly. The issue is that if people don't conform to group think in certain university environments...their future ability to provide for themselves is on the line without the degree since they've already accumulated at least some debt by attending the school.

These morons are blinded by a word used to distract - racism. One of the biggest wealth heists just happened in this country. That's what hurts the lower and middle class. That's the real inequality. As long as everyone is fighting about racism their scam will go on. Just like it has in Afghanistan for the past 20 years.