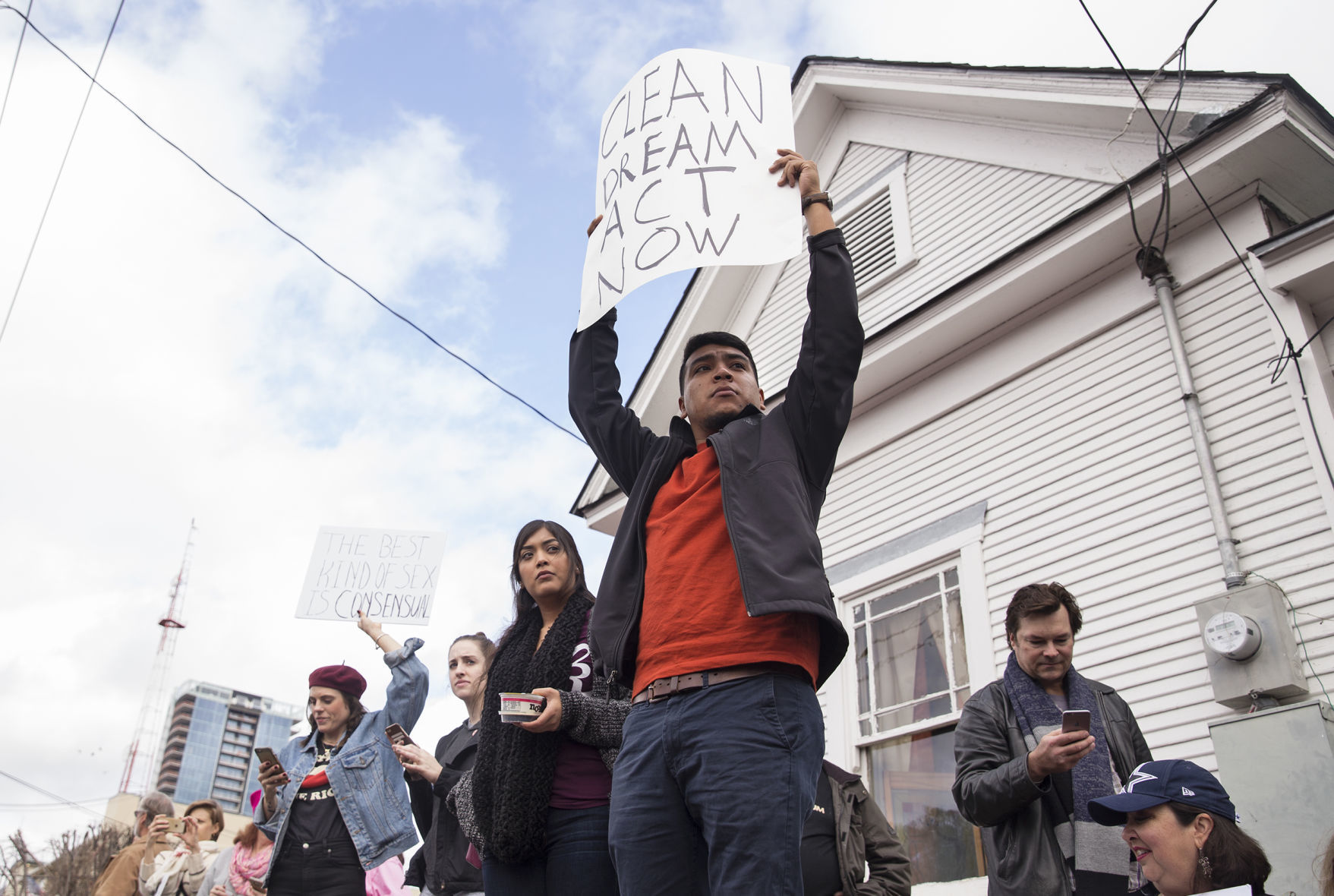 Oscar Galindo, Denton resident and Deferred Action for Childhood Arrivals recipient, holds up a sign that reads “Clean DREAM Act now” Jan. 20 at the Dallas Women’s March in front of Pike Park. “I feel like I need to be out here fighting and saying what I feel because it’s important that all DREAMERS are kept here in America, because, I mean, this is our home we know,” Galindo said.

As Election Day approaches, immigration policies are among the various topics being discussed in relation to the presidential candidates and their stances.

The UTA community weighed in on what they hope President Donald Trump and Democratic nominee Joe Biden will lay out in their immigration policies approaching the upcoming election.

Trump’s commitments regarding immigration include the construction of a border wall between Mexico and the U.S., ending chain migration, elimination of the visa lottery and moving the U.S. toward a merit-based entry system.

If Biden is elected, his administration plans to modernize America’s immigration policies by welcoming asylum-seekers and refugees, bringing an end to the separation of parents and children at the border, addressing the causes of irregular migration and implementing effective border screening, according to Biden’s campaign website.

According to the Trump administration, the United States must adopt an immigration system that serves the national interest.

Salinas researches 20th-century immigration policies and U.S.-Mexico border history. She said there has been a resurgence of anti-immigrant sentiment in the U.S. similar to the early 20th century, which resulted in strict laws.

During former President Barack Obama’s administration, there was a high degree of deportations, Salinas said. Obama attempted to secure the border in order to gain congressional support for immigration reform bills that never passed.

Under Trump’s presidency, all unauthorized immigrants have been put on a priority list for deportation, and anyone detained is at risk for deportation whether a crime was committed or not, she said.

The Deferred Action for Childhood Arrivals program was introduced as an executive order during Obama’s presidency in 2012, she said. DACA is an immigration policy calling for deferred action for undocumented young people who came to the U.S. as children, according to U.S. Citizenship and Immigration Services.

Trump tried to suspend DACA in 2017, but the Supreme Court deemed the action unconstitutional June 18, 2020. Trump has not fully reinstated it, but those already in the program can renew their status, she said.

Political science professor Thomas Marshall said Trump’s primary achievement is the construction of a border wall at the U.S.-Mexico border, even though it’s tied up by various lawsuits.

One of Trump’s main platforms in his 2016 presidential campaign was for the building of a U.S.-Mexico border wall.

“We will build a great wall along the southern border, and Mexico will pay for the wall,” Trump said during a 2016 campaign speech in Phoenix, Arizona.

Mexico did not pay for the construction of the wall but the Department of Homeland Security diverted military construction funds in 2019.

Additional key actions in immigration policies under Trump include the public charge policy, attempts to reduce mass border crossings and detainment of people at the border, Marshall said.

“Immigration didn’t particularly use to be a Republican versus Democrat partisan issue, and now it is,” Marshall said.

Trump’s administration has had the greatest impact not just on undocumented immigration but also in trying to severely restrict legal immigration, Salinas said.

“My concern is that would become even further intensified if he were reelected,” she said.

Spanish senior Austin Byboth said policed borders and a clear, reasonable path to citizenship should be focused on during this election.

There is a problem with illegal immigration in the U.S. because of the nature of its convoluted citizenship process, he said.

“I’m proud of the United States, I want people to be part of it,” Byboth said. “I don’t want it to be through amnesty or through concerning immigration courts.”

Public relations senior Jesus Torres said he hopes to see a reunification of families separated at the border, people given a pathway to citizenship and protection for those ineligible for DACA.

No matter the outcome of the election, Torres said it starts from the bottom with organizing efforts so people can put pressure on the president and administration to further legislation.

“You just need love for your community and want for change to have a better life for all of us,” Torres said. “I would like to see more people organizing, more people getting involved in pressuring our government to really look out for us.”