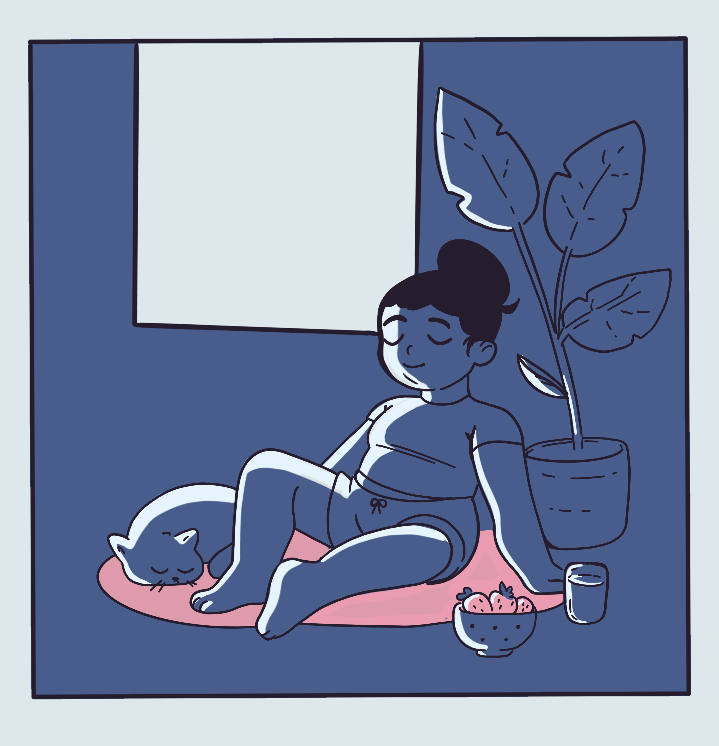 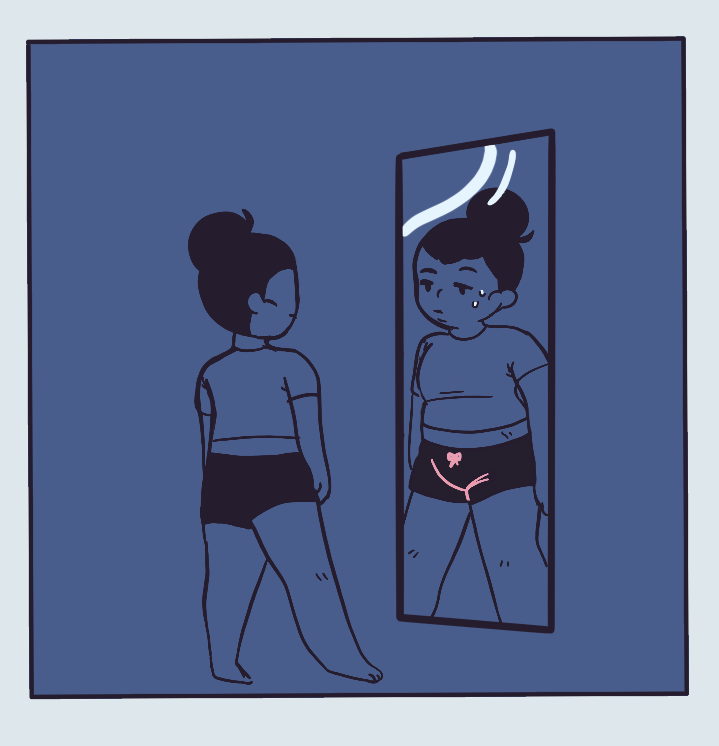 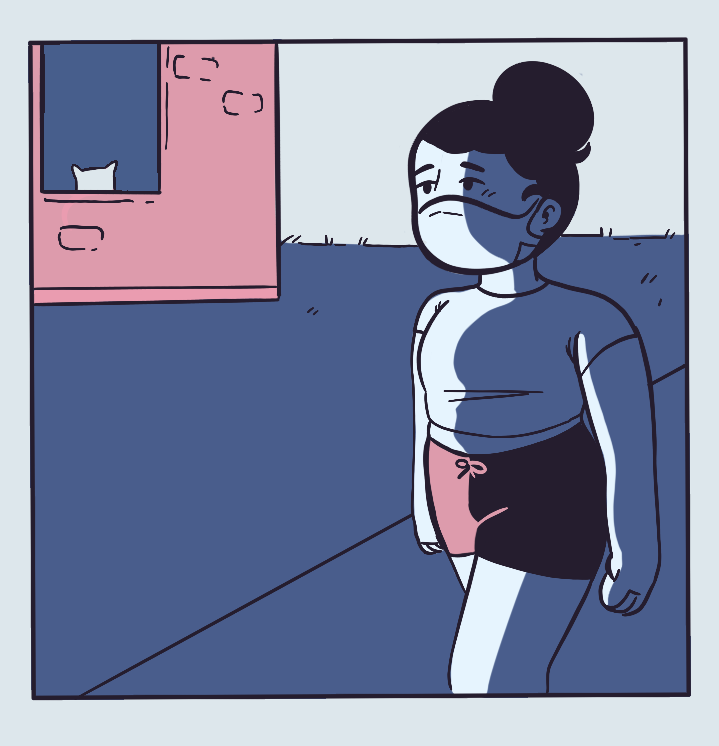 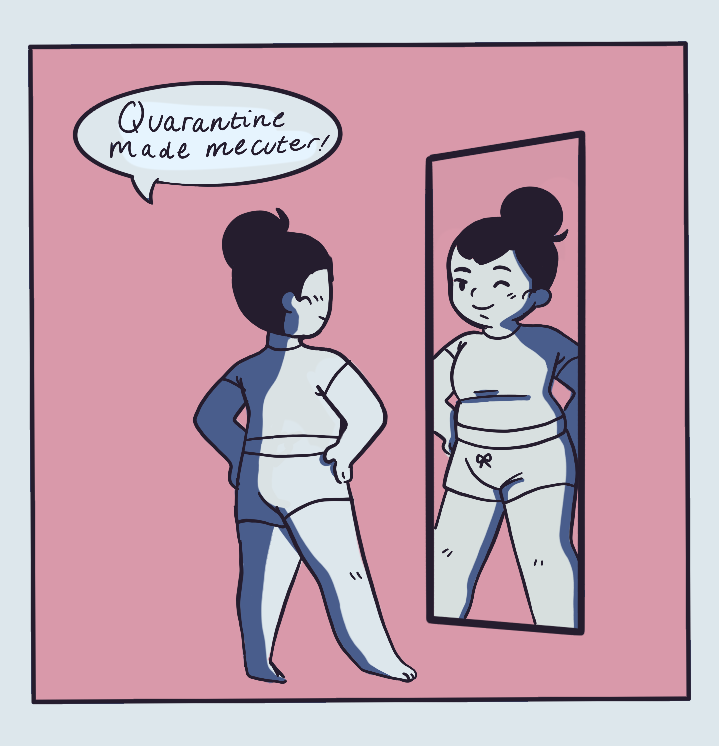 In the last few months of social distancing and increased time spent at home, many people have begun to put on a few extra pounds.

Traditionally, weight gain has been viewed as a negative change, but recently, many have taken it as an opportunity to spread body positivity, even if it isn’t always easy.

The term “quarantine 15” was coined to describe weight gained amid the pandemic and parody the well-known “freshman 15.”

At the same time, social media has lit up with the “quarantine glow-up,” for people to post pictures showcasing their clear skin, muscled bodies and other socially accepted body changes.

It’s hard to see people on the internet trending the quarantine glow-up, social work junior Deanna Thompson said, because for her it hasn’t been simple.

Her journey to body acceptance started in junior high, Thompson said, when she first started struggling with feeling “good enough” to fit societal expectations of beauty. By early high school, she was at the worst time in her life in terms of body image.

“I was probably like, my lowest weight ever,” she said. “I was so skinny, but I thought I was huge.”

Since then, Thompson has worked to change her negative mind-set and consume media that makes her feel good about herself. But the COVID-19 pandemic set her and countless others back on their progress.

Not going to school every day and being separated from her friends took a toll on Thompson, but putting things into perspective has helped her feel better about her body lately, she said.

“You kind of have to realize that it’s OK because we’re literally living in a pandemic, and that’s such a stressful time,” Thompson said.

She’s not 100% body-positive all the time, Thompson said, which is the side of loving yourself social media doesn’t show you. She still has bad days where she wakes up feeling like she can’t wear certain pieces of clothing, but switching to a positive mind-set is a process, she said. Bad days included.

Although Thompson’s journey started long before the pandemic, many people have struggled with unwanted weight gain since March due to loneliness and other mental health changes that come with self-isolation.

People eat when bored, registered dietician Stacie Ellis said, which can be a cause for the quarantine 15.

Since being at home means easy access to the kitchen, some people might find themselves eating more than they should, and at irregular times of the day.

Eating when bored can disrupt that rhythm, which is why it’s important to try to eat at roughly the same times every day. Having her clients stick to a schedule is a technique Ellis uses because aimlessly eating throughout the day actually confuses the body.

A big hurdle coming up is the beginning of school, Ellis said, which can result in stress-eating and mess with your rhythm.

“I could tell you all day long that you shouldn’t stress-eat, [but] people are still going to do it,” Ellis said. “So if you’re going to eat, I recommend that you chew on things that’s not going to mess you up calorie wise.”

Carrots, celery and apples are all good choices, she said, and other crunchy things like trail mix or nuts are good, too. Or if it’s the feeling of chewing that makes you relax, gum is a good option.

People turn to food for comfort, Ellis said, but food by itself can’t make you happy or relieve boredom long term. Ellis recommends trying a hobby or something else to put your time into instead of stress-eating.

Personally, Ellis is home alone every day while her husband goes to work, so something she’s been doing to both relieve boredom and get a little exercise is walking her dog, which has the added benefit of allowing her to get some sunshine as well.

“Even if you just step outside for a few minutes in the middle of the day, you know, just having that sunshine on you actually does help,” Ellis said. “Vitamin D levels can be a factor in how you feel.”

Exercise gets suggested a lot when discussing quarantine health tips, Ellis said, and although exercise routines release endorphins and will make you feel good, it’s hard for many to make themselves start.

Instead, she recommends people try getting up and moving around or even dancing sporadically to get their blood flowing again after sitting or working for a while. Ellis herself does the dancing tip because it’s easy to do on a whim and doesn’t take any mental effort.

Unlike Thompson, who’s had many years to adjust to the changes she goes through, Marcel Castro, social work graduate student, is fairly new to disliking the way she looks.

Burnout from school and the stress from getting out of an unhealthy relationship led to insecurity about her body in her senior year of undergrad, she said.

“I started feeling bad about myself and kind of getting into this cycle of toxicity, and realizing my body didn’t look the way I wanted it to look,” Castro said. “I believe that was the trigger for me.”

But Castro isn’t one to passively mope or not work out the problem. She started by reading self-help books, she said, and taking advantage of Counseling and Psychological Services’ six free therapy sessions.

She was in a good place at the beginning of self-isolation because she was ready with a prepared schedule and an arsenal of healthy snacks, she said. But a few months in, she wavered.

“I started really feeling the intensity of being at home, away from friends, family, work, what was normal for me, and it hit me hard,” Castro said.

She started neglecting herself and noticed a spike in her weight because of it, she said. But a few weeks later she met up with her family, and being around them reminded her that she wants to live a healthy and positive life.

“You’ve got to be nice to yourself, you know, you have to remind yourself that you’re not perfect,” Castro said.

Even if you mess up or indulge in one fast food meal too many, you just have to tell yourself it’s what you needed to get through the day, Castro said. Then just get right back to doing your best.

In many instances, supply lines for our food availability has determined a path in which nutritional value is neglected and replaced with empty calories. Compound that with a lazy population, who’s bodies haven’t reached a homeostasis in relation to the increase in fast carbohydrates. Humans were meant to move. Survival doesn’t simply mean existing. You’ve got to earn it everyday.

Food are all consumer choices. You want good food? You’re going to have to pay more for it. Why? That’s what the market demands. Right or wrong that’s what it is. The truth is that if you cook for yourself, which is a privilege, then you can buy healthy food and prepare meals in advance.

There’s a lot we can do to determine our paths. Owning our body health makes society healthier at large. Have a great day.