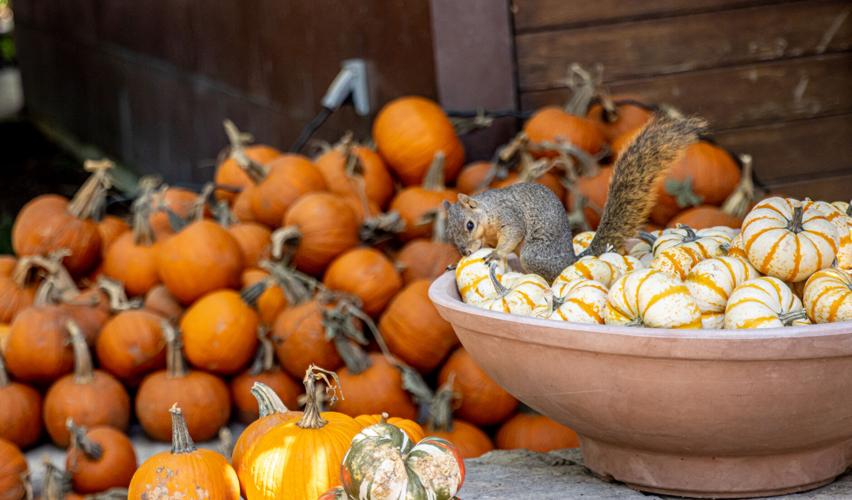 A squirrel sorts through pumpkins during Autumn at the Arboretum on Sept. 22 at the Dallas Arboretum and Botanical Garden. Visitors could buy pumpkins at the entrance. 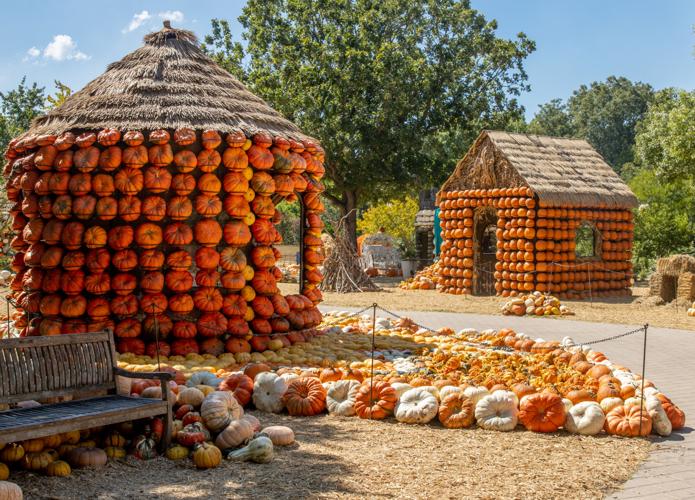 Houses decorated with pumpkins welcome guests during Autumn at the Arboretum on Sept. 22 at the Dallas Arboretum and Botanical Garden. This year’s theme is “A Fall Fairy Tale.” 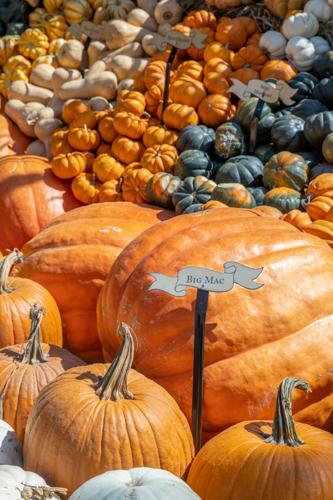 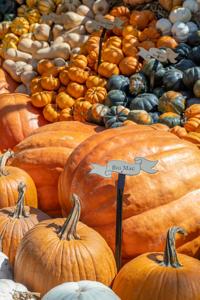 Labeled pumpkins are lined up for visitors to potentially buy during Autumn at the Arboretum on Sept. 22 at the Dallas Arboretum and Botanical Garden. Some of the pumpkins they offered were labeled as Big Mac, Mini Midnight, Mini Orange, Large Jack and Orange Acorn.

There is a place beyond the concrete walls of East Dallas, on the shores of White Rock Lake, where flowers bloom and grasses bud with drops of gray dew and where every season’s colors are captured in cozy displays.

The Dallas Arboretum and Botanical Garden is everyone’s backyard.

From flowers to gourds to big-leafed plants, lush greens and golds next to reds and oranges spill over the winding paths leading to “Pumpkin Village.”

The garden hosts multiple themed events complemented by seasonal horticulture arrangements that bring the colors and theme to life. This year, it began its Autumn at the Arboretum: A Fall Fairy Tale festival Sept. 17, showcasing over 100,000 pumpkins and gourds across 66 acres, all centered around the fairy tale theme.

The arboretum tries to offer guests all the flavors of fall and form an emotional connection that gives them a sense of the season, said Dustin Miller, senior director of experience and innovation at the arboretum.

“It’s fall, so it’s about the flavors. It’s about the look of the pumpkins and the hay and the corn stalks,” Miller said.

While the presentation might be elegant and serene, the setup was a race against time.

By the Tuesday after Labor Day, semitrucks begin hauling the 100,000 pumpkins and gourds from a family-owned farm in Floydada, Texas, to the arboretum, said Megan Proska, horticulture director at the arboretum. A team of 50 staff and volunteers unload the pumpkins over four days, and since they don’t work on weekends, they have just five days to place and arrange them before the opening weekend.

The team often works in an assembly line to carry and stack the larger pumpkins, hundreds of which can weigh over 50 pounds, Miller said.

But the setup is just half the battle, as the displays require constant maintenance to keep the gourds looking fresh.

The sun wreaks havoc on pumpkins, Proska said. It can burn their skins and cause them to rot, requiring teams to replace or consolidate them daily throughout the season. If necessary, a second delivery replenishes the common orange pumpkins around October.

“Since we’ve only been open a week, we’ve seen a lot of scorch on the gourds, so they’re not as vibrant in their colors anymore,” she said.

Even after the autumn festival ends, the pumpkins are put to use, Proska said. The rotten ones are composted throughout the season, and the extras are donated to places like the Texas Gourd Society for pumpkin art, pig farms and animal shelters as food and toys or the Dallas Zoo to enrich animal mental health. Guests visiting the zoo in the fall might see a lion with pumpkins in its cage.

Pumpkin placement and maintenance aren’t the only challenges when pulling off the fairy-tale-themed event.

The festival also features displays based on Cinderella, Jack and the Beanstalk, The Sword in the Stone and The Three Little Pigs.

Themes are decided a year before each festival, and metal structures like Cinderella’s carriage and the Jack and the Beanstalk vine are built months in advance, Proska said. Teams then work on color schemes and arrangements to ensure the theme is captured.

White pumpkins were placed around the beanstalk and the base of Jack’s house to give the impression of it rising into the clouds and provide that whimsical feel, Miller said.

The arboretum focuses on the finest details, pairing weekly events with each display in color and theme. This might be a vendor selling edamame stationed outside of Jack’s house or a petting zoo with three little pigs let loose through Pumpkin Village, he said.

Proska said she enjoys the opportunity to play with the different colored flowers, grasses and vegetables and fit them into the seasonal color palette.

Arlington resident Cristina Cruz said that 18 years ago, her mom knew the arboretum would be the perfect place for Cruz’s quinceañera pictures the moment she saw the flowers. Now, Cruz wanted to recreate that experience for her own daughter, she said.

The family shopped store-to-store hunting dresses, but Cruz said her daughter had known the one she wanted from day one — an emerald green and gold dress bedazzled with soft diamonds.

At the arboretum, Cruz and her family found a bench along a quiet creek and sat her daughter down, fanning out the dress in all directions like a deep blooming jewel greener than the thick sage of the trees and sprouting grasses behind her.

“We walk around, and everybody’s telling her she looks so beautiful or little girls thinking that she’s a princess. It’s a magical moment for us. We even cried when we first came in,” she said.

Taking pictures at the arboretum has become a family tradition, and she was able to enjoy this moment with her brother for the second time, who was only a baby when he attended Cruz’s quinceañera pictures, she said.

Every time someone comes into the arboretum, there will be a wide variety of blooming plants to give them that colorful backdrop in a way most gardens don’t, Miller said. It’s a backyard for millions of people and a place that can feel like home.

“There’s a color of plant and a flower for everyone,” he said.

100,000: Total number of pumpkins, gourds, and squash at Autumn at the Arboretum

54: Types of pumpkins, gourds and squash

25,000: Number of marigolds planted for the festival