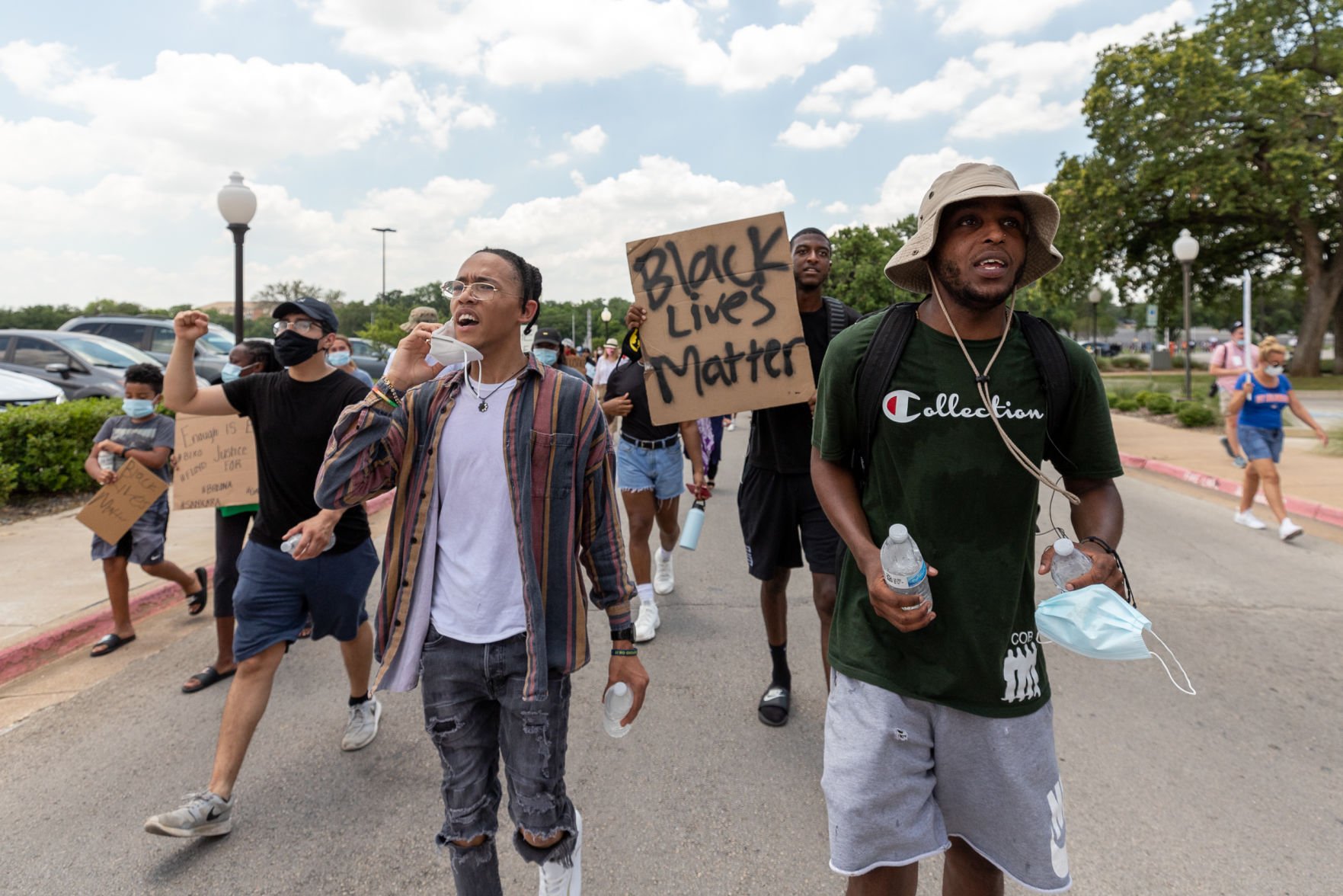 Psychology senior LaDarius Sanders marches along West Street during a protest on the UTA campus June 8 in Arlington. Sanders said police brutality has been an issue since he was born and before that since his 90-year-old grandmother was born. 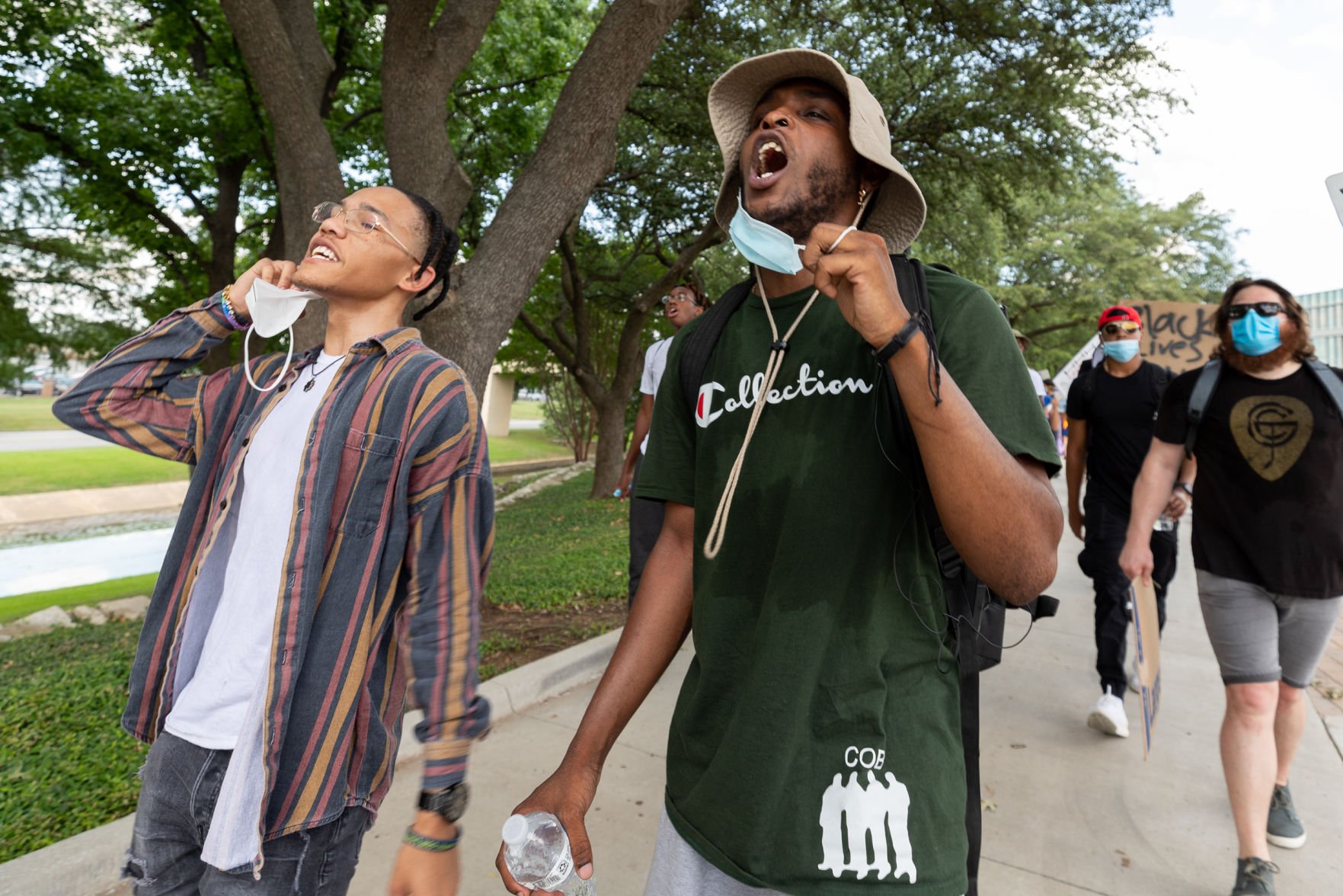 Psychology senior LaDarius Sanders, right, marches during a protest against racial injustice on the UTA campus June 8 in Arlington. Sanders said he is hoping, fighting and working for justice. 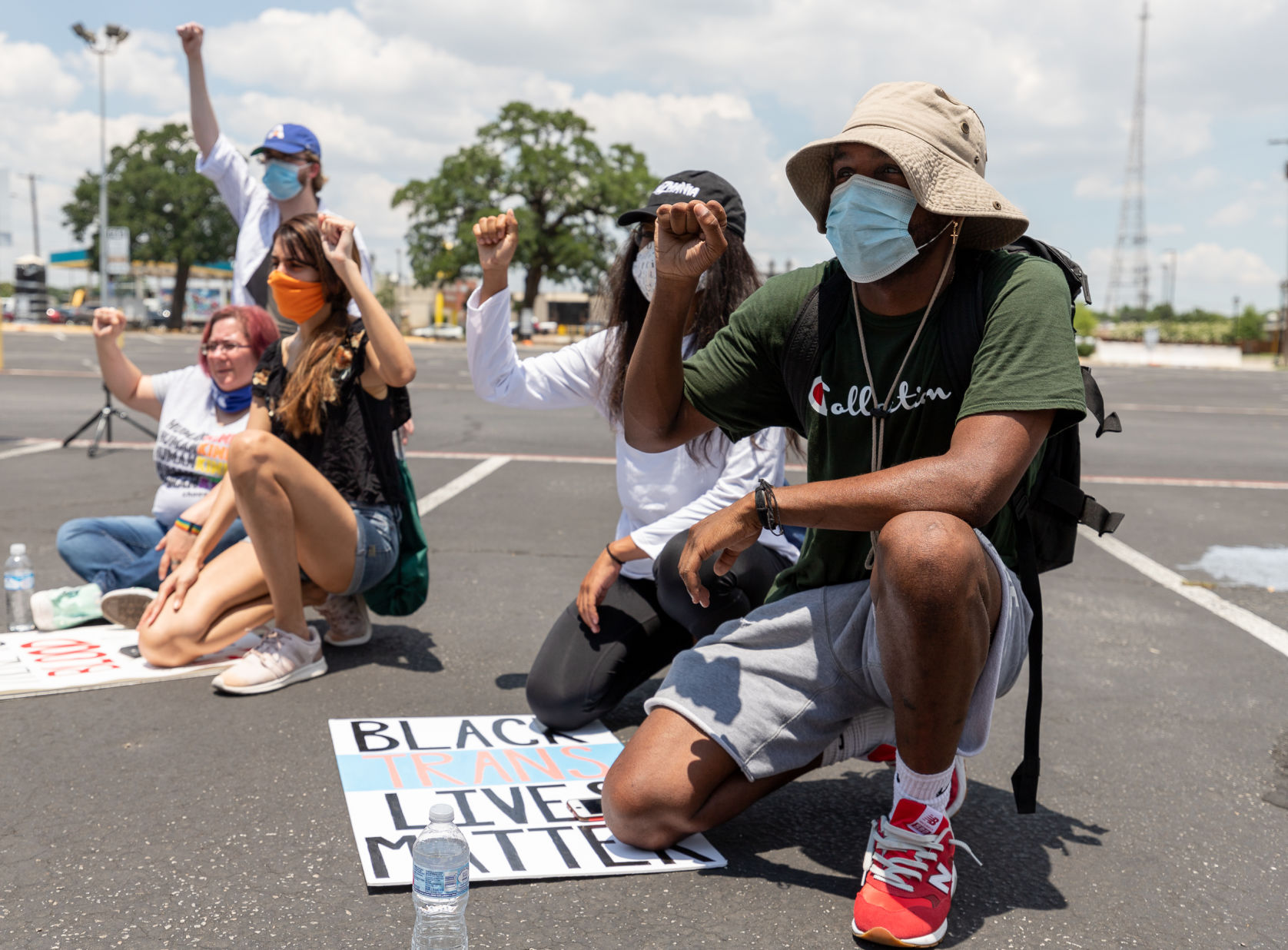 Psychology senior LaDarius Sanders kneels during a protest against racial injustice on the UTA campus June 8 in Arlington. Organizers asked participants to kneel and raise a fist for eight minutes and 46 seconds — the same amount of time that George Floyd was pinned to the ground.

On Monday morning, psychology senior LaDarius Sanders called his mother and his best friend to tell them where he was going and to let them know he loves them. He said he talks to his mother on the phone every day, but this call was slightly different.

Make sure you’ll be safe at the protest, his mother urged. There’s crazy things going on.

After reassuring his mother, Sanders met up with three close friends: Zyshonne Harris, Kamron Matthewson and Diego Riddick. Together, they walked to the School of Social Work building, which was hosting a march around campus to protest the death of George Floyd.

Sanders said this was the first full protest he was able to participate in since the recent surge of protests against police brutality and racism began, but for him, the Black Lives Matter movement is personal.

“I’m a black man,” he said. “It’s specifically us who are being targeted by police.”

Matthewson, an industrial engineering senior, said that as a 20-year-old, 6-foot-8-inch black man, his personal appearance exudes pressure, even if he acts meek and kind. This isn’t an issue he can ignore, so he’s made it his personal responsibility to actively participate in the Black Lives Matter movement.

The four students felt compelled to join the protest armed only with a cardboard sign that read “Black Lives Matter” because it’s a topic that affects each of them every day.

During his weekly check-in with his 90-year-old grandmother last week, Sanders said they discussed racism and police violence.

“The first thing she said to me was, ‘I’m so tired that they’re doing this to y’all still,’” he said.

Sanders is tired of it, too.

From kindergarten, black children learn the reality of racism and police violence, he said. Black parents teach their children how to interact with the police — keep your hands straight, do what they say, don’t make sudden movements.

But that’s a reality that shouldn’t exist, Sanders said.

As a child, Matthewson said it was easier for him to ignore or remove himself from the sensitivity of police killings. Now though, he’s outraged.

“We shouldn’t have to be out here in the middle of a pandemic telling you that our lives matter,” he said.

Nevertheless, when Sanders initially heard about Floyd’s death, he said he was shocked but not surprised. Black people being killed by police is something you hear about every other day, he said, but this case was going to be different. This time, violence wouldn’t be tolerated.

Riddick, a criminal justice senior, said the violence against Floyd pushed many people to take action.

“This is the straw that broke the camel’s back,” Riddick said. “They keep happening, and they’ve been happening for many years. This one is the one that people were like, ‘Enough is enough.’”

For now, there’s no telling when the protests will end, Riddick said. But until then, it’s important to remember to do more than protest. Sign petitions, write to your local government and vote in elections, he said. Create change.

So far, Riddick said the government has tried to appease protesters with temporary change, convicting guilty officers and pledging to dismantle the Minneapolis Police Department. But that isn’t enough.

Sanders said he plans to continue protesting until he sees an entire social reform.

“This is not just a protest for us, for me,” he said. “I’m literally out here fighting for my life because my life is at stake when I leave my apartment.”

Black people can’t do it alone.

Riddick compares the George Floyd protests to football fans wearing pink in October for Breast Cancer Awareness Month — wearing pink isn’t going to stop breast cancer, and marching in a protest isn’t going to end racism. However, it does raise awareness about the issue.

Some people still don’t realize that black people face racism and violence on a daily basis, Riddick said, but the prominence of these protests helps to counteract their ignorance.

Monday’s protest brought people of all backgrounds to circle the campus. As protesters lined the sidewalks, Sanders and his friends tipped their heads back and led the crowd in yelling the now-familiar protest chants until their voices cracked and they ran out of breath.

No justice, no peace.

Get your knee off my neck.

For Sanders, leading the chants was a continuation of other black people’s fight for justice before him — people like his grandmother.

“This country was not built for black people, but it was built by black people,” he said. “We definitely deserve to be heard and for our problems and issues to be solved by our government.”

Harris, a broadcast and communication senior, said now isn’t the time to let up.

There needs to be permanent change.

Step out of your comfort zone, Harris said. Be hot, get sweaty and lose your voice — everything that comes with protesting. Marching in the street in 91-degree weather isn’t fun, but it’s a necessary step.

People who aren’t black might get tired of hearing and seeing the protests on social media and in the news, but Harris said they need to hear it every day until there’s change.

Students, protesters and a high school friend of Floyd lend their perspectives on the national protests against racial injustice that are sweeping the country.

“You’re annoyed by hearing it, but we’re annoyed by living it,” he said. “We’ve been living this way for 400 years. We’re tired.”

Sanders said he’s tired of facing police aggression in daily interactions or routine traffic stops. Incidents that any white person wouldn’t bat an eye at make him nervous for his life as a black man.

“You know how, in cartoons, they show the hearts beating out of their chests? That’s how my heart feels,” he said. “It’s beating that hard. It shouldn't feel that way, but it does.”

Despite the racism and violence he and his friends cope with daily, Sanders said he feels nothing but pride in his identity as a 21-year-old black man.

“My people are amazing in every way,” he said. “We’re strong, and we’ve been through so much. If you just look at our history, it’s amazing that we’re here today and able to fight for our rights.”

As the 12th largest city in America and as a home to a large minority population, Fort Worth should speak out against racism, said project organizer Deborah Peoples.

What systemic change would actually work?? Is there really anything wrong with the system? Facts: George Floyd was high on meth passing out fake dolla bills. He got the police called on him, rightfully so. Shouldn't have died that way of course. The cops got arrested and are being charged, justice served so far. The number of deaths by police are not systemic, a rare occurrence. Media can hype anything they want all day. This is about destabilizing the nation to allow a political revolution to take place. Floyd's death is being exploited to further the goals of socialism, fact. Disbanding the police will lead to greater destabilization, fact. You've all been played.