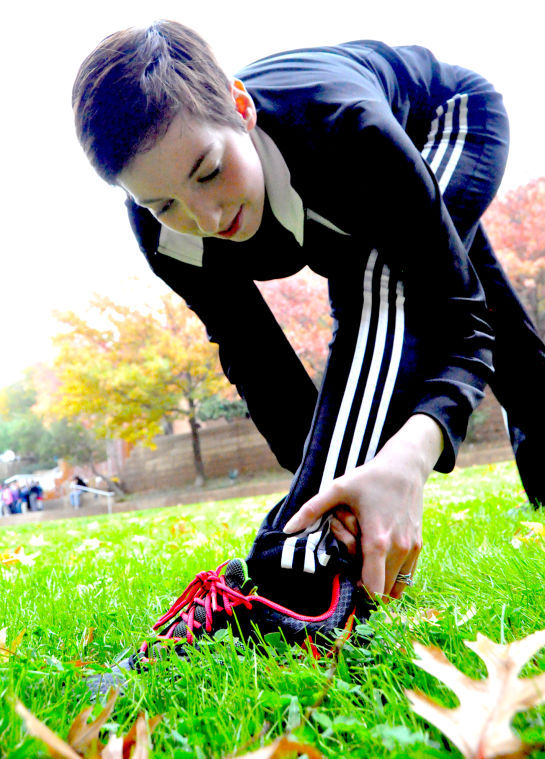 Kinesiology senior Courtney Redden stretches her legs after a workout at the Maverick Activities Center on the morning of November 21st. Redden is training for her first triathlon. (The Shorthorn: Ann Mai) 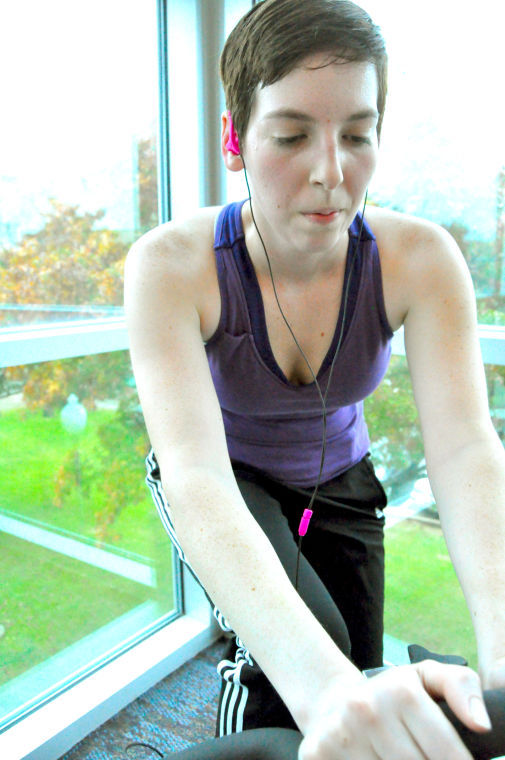 To prepare for a triathlon, kinesiology senior Courtney Redden works on her cycling muscles at the Maverick Activities Center on the morning of November 21st. (The Shorthorn: Ann Mai)

Kinesiology senior Courtney Redden stretches her legs after a workout at the Maverick Activities Center on the morning of November 21st. Redden is training for her first triathlon. (The Shorthorn: Ann Mai)

To prepare for a triathlon, kinesiology senior Courtney Redden works on her cycling muscles at the Maverick Activities Center on the morning of November 21st. (The Shorthorn: Ann Mai)

A year and a half ago, kinesiology senior Courtney Redden decided to try a vegan diet while she was holding a bowl of chicken alfredo, she said. Chicken alfredo and vegan in the same sentence? I was less confused when she told me that she was in the middle of watching Forks Over Knives, a documentary about the health benefits of a plant-based diet.

Redden grew up with an active lifestyle, starting with gymnastics and dance at a young age. After dislocating her shoulder, she no longer tumbles, but continues to stay active in other ways. As a fitness enthusiast and active athlete, Redden said she was excited about the changes she felt with her switch to a vegan diet. Last fall, she and her classmates conducted a research study to examine the effects of veganism on exercise.

I spoke with Redden about her group’s research, and it turns out she is training for a triathlon this semester.

The Shorthorn: What was the premise of your study? Could you tell me about the setup and execution?

Courtney Redden: We did a study with 12 fairly active individuals to compare the effects of their diet on their post-exercise recovery. We wanted to figure out if there was a recovery mood difference between people who were vegan and those who consume the standard Western diet. We had them work out and then measured their total mood disturbance, to see if there was a difference in their fatigue and profile of mood state afterwards.

TS: What motivated you to research this topic?

CR: I had recently switched to being vegan a few months before doing the study. I was just really pumped up about it and thought it was really cool. I had read up on some research about it. As I kept going into it, I wanted to apply it to something in my field. I wanted to pick research I was passionate about. All the people I had talked to who were vegan, they always said that after going vegan, they were not as fatigued after working out, so I said, “Well, let’s test it.”

TS: What was your hypothesis, and what were the results?

CR: The hypothesis was that there would be a difference in mood state. It turned out, as far as statistical difference, it ended up not having a difference. That being said, we measured the total mood disturbance. Originally we wanted to examine just the fatigue but felt like it would be an easier way to explain if we measured the total mood disturbance instead. The total mood wasn’t much different, but the fatigue levels were a lot higher in the consumers of the Western diet, whereas the vegan group’s fatigue was lower.

TS: How would you further this research in the future?

CR: We had so few people. I would want to do a more in-depth study and take detailed measurements of the post-workout fatigue and blood lactate levels, to see if there’s anything physiological going on, other than just how they feel.

TS: How often do you work out, and how long?

CR: I try to work out almost every day. Being a student, it’s a little hard. I’m training for a triathlon that’s happening soon, so I’m trying to get my work outs in to prepare for that, but not overdoing it. I like to work out for at least an hour and a half.

TS: Have you trained for a triathlon before? How has that been going? How do you feel about it?

CR: It’s going to be my first triathlon. I feel like I can do it. It will be a combination of biking, running and swimming, all of which I have done. For endurance training, I can run about 6 miles per hour consistently. I got married in the middle of the semester, so that threw my training off a little bit. I was training so well and so careful with my diet that when I tried on my dress a couple of weeks before the wedding, it was too big. There wasn’t enough time to alter my dress, so I had to stop training and just start eating a lot. It was funny, my family kept telling me to eat more, but now I’m back to my training.

TS: Are you doing a special diet plan/workouts to help you get prepared?

CR: I try to eat mostly vegan, for health and ethics, but before I was training, I was getting a little lazy, eating more vegetarian meals, especially when I went out with family or friends, but since I started training, I’m back to eating vegan meals. I feel like I get more energy and I work out better that way. It’s just a matter of getting enough calories, which can be a challenge sometimes. I actually have a workout schedule, whereas before, it was more about what I felt like doing. Before, I had more days devoted to weight and resistance training. It was structured in the sense that I had leg day, and then arm day. Now it’s more of a combination. If I did swimming and running yesterday, then today I’d do biking and running, or sometimes I’ll do all three.

TS: Are you doing any additional workouts, besides the running, biking and swimming?

CR: I’ve been doing yoga a couple nights a week, that way I’m not just putting too much strain on my joints. It’s a lot of core strength and stability. I feel like it’s really relaxing, and it’s also a really good workout. Before I started yoga, I had this idea that it was just doing a couple of relaxing poses.

TS: What would you say to athletes who are skeptical of performing on a plant-based diet?

CR: I know that for a lot of people, their main issue is the protein part. Protein is made up of amino acids. You have essential amino acids you have to consume every day that can’t be made by your body. You have to replenish it. Those essentials can all be found in one source, which is meat. That’s why everyone says, “Oh, I have to have meat.” But you can find all of those essential amino acids in vegetables—you just won’t find them all in one vegetable. But the way I see it is, who wants to just eat carrots all day? You’re going to eat more than one type of vegetable in one day, so it’s completely doable, in my opinion.

TS: Would you recommend other student athletes to try going vegan, and what would your advice be for students who are interested in trying it?

CR: Even though I feel like this is the best way to eat, I don’t feel like anybody should take one side without doing their own research and looking at their own experience. I stopped eating animal products but still continued to do more research to try to find out more information on it, to make it more credible. The longer I stuck with it, the better I felt, and more I learned, the more I feel like I made the right decision for me.

TS: Should diet or exercise be the priority for those wanting to stay fit?

CR: I feel like if you change one or the other, then you will consider the other. If you change to a healthier diet, you’re going to want to work out, or if you start working out, you’re going to want to eat healthier. Because you don’t want to mess up your workout. I feel like a lot of people don’t understand the concept of calories in and out, so they just kind of eat whatever they like. They’ll go work out and be like, ‘Oh, well I already worked off this cheeseburger,’ or something unhealthy. When people work out and burn, say 700 calories, that works off a good slice of cake and some ice cream, but they aren’t considering the fat content. You don’t want to eat things that are empty carbs that won’t aid your body.

TS: Are carbs the enemy?

CR: No, not at all. Carbohydrates are good if you get the complex ones. Simple carbs like sugars, white bread and jelly are bad. Carbs are so important for your diet. They are the number one fuel source for your body. If you aren’t eating the right type of carbs, it’s not beneficial for your body. Things like whole grains, beans and lentils provide nutrients and fiber that will help you.

45 Superfoods to Add to Your Diet

Vegans and vegetarians should 'run on plants' to win, says fitness guru

Here are some of Courtney Redden's favorite fitness essentials. Scroll down to check out her workout playlist.

Favorite protein sources: Chickpeas and other beans (likes to put them in pot pies and Mexican casserole dishes)