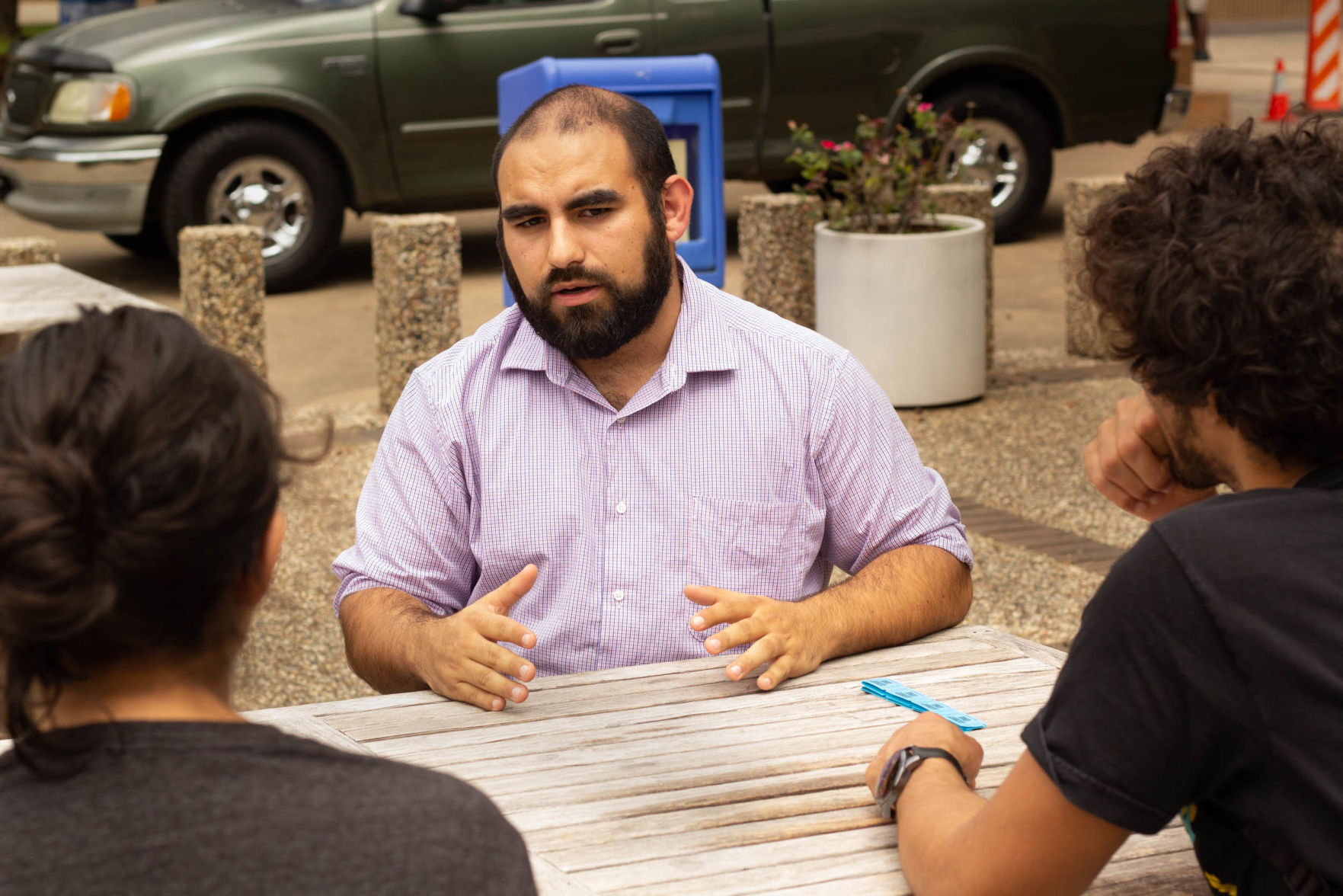 Dallas resident Aldo Vela talks with students at the Human Library event Sept. 19 on the Central Library mall. Vela was a 'human book' and discussed his experience with polyamory and ethical non-monogamy as alternatives to standard monogamous relationships. 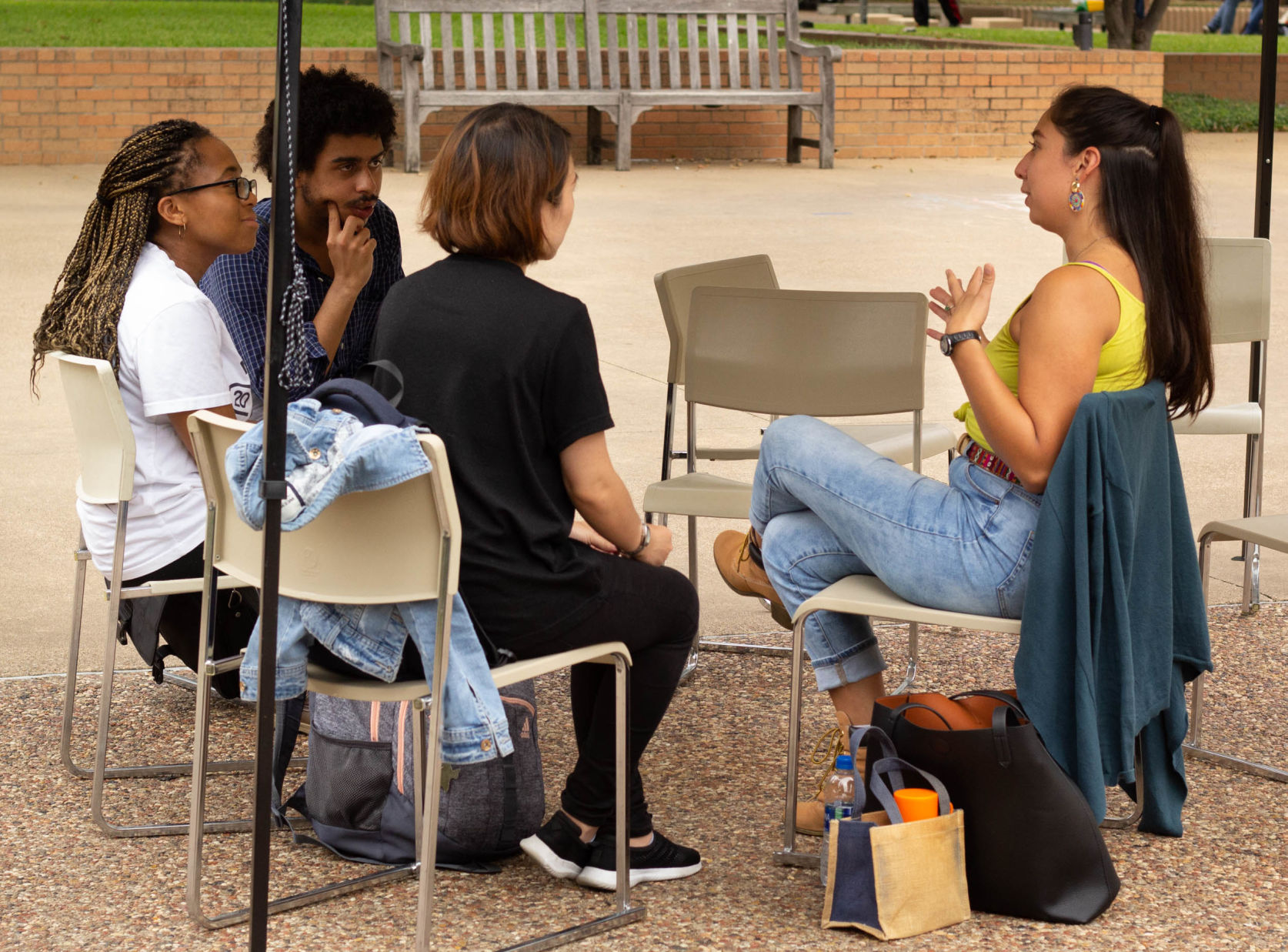 Glendybelle Calderon, social work graduate student, right, shares her story at the Human Library event Sept. 19 on the Central Library mall. Calderon, who was born in the U.S. but raised abroad, talked about her experience as an immigrant. 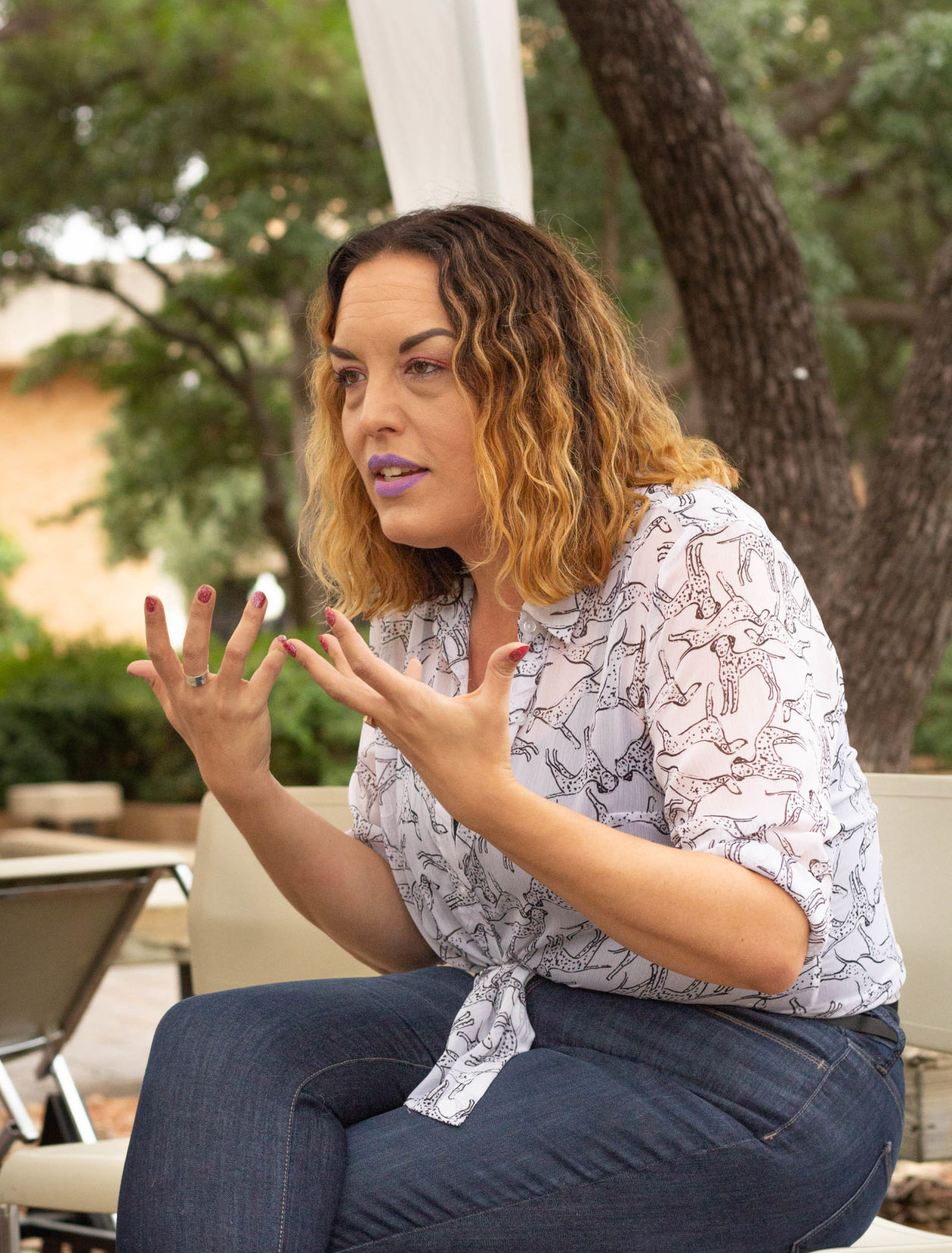 Dallas resident Aldo Vela talks with students at the Human Library event Sept. 19 on the Central Library mall. Vela was a 'human book' and discussed his experience with polyamory and ethical non-monogamy as alternatives to standard monogamous relationships.

Glendybelle Calderon, social work graduate student, right, shares her story at the Human Library event Sept. 19 on the Central Library mall. Calderon, who was born in the U.S. but raised abroad, talked about her experience as an immigrant.

Communication technology senior Ivan Diaz spent his afternoon outside the Central Library, talking to strangers under tents and listening to their life stories.

However, he didn’t just walk over and start up a conversation; he checked them out like a book.

The Human Library is an event meant to give people the opportunity to break down barriers, said Milaun Murry, experiential learning outreach and events specialist, in an email. The Central Library hosted its second Human Library on Thursday.

At the event, students get the chance to speak with individuals from different backgrounds and groups and learn what makes them unique, Murry said.

Diaz said he attended the event because he believes there’s a lesson to be learned there.

“No matter where you go, you can learn,” Diaz said. “Especially from people who are older than you, just listening to their stories.”

One of those people was Doug Garner, Movin’ Mavs head coach.

Garner said he attended the event as a book to tell his story of seeing how athletes with disabilities are either excluded from participating in athletics, or not supported at the same level as traditional athletic programs.

Garner’s son was born with a disability. One day, he asked his parents if he could participate in a kid’s race downtown, causing Garner and his wife to reconsider aspects of his disability, he said.

“As parents, you kind of focus more on the disability part of it,” Garner said. “We didn’t think about his life outside of the person with a disability. So it kind of changed the way we looked at disability, and we started a sports program for kids with disabilities in Arkansas.”

Sports are just as important for this population as any other population, Garner said. Athletes are athletes.

The Human Library event gives students an opportunity to ask some of the tough questions about other people’s lives, Murry said.

“When I first started working at UTA, I knew that I wanted to bring the Human Library to our campus,” Murry said. “With the help of multiple departments across campus, we were able to do so and hope to do so for the foreseeable future.”

Diaz said that the first human book he spoke with told him about her weight loss journey, and it made him reflect back on himself and how he makes his decisions.

Even though the event was almost exactly the same as last year’s, Murry said one of the things they would eventually like to overcome is the scarcity of human books.

“It can be difficult to talk about some of the topics presented, so we understand the hesitancy that some people may have,” Murry said. “We hope that as we continue to host this event more people will become comfortable and willing to share their story with the community.”

Diaz attended the event both years, and he said that he would recommend the Human Library event to other people.

“I think that they should do this more often on a larger scale,” Diaz said.

Last year, several students said that checking out their human books encouraged them to learn more about social groups that were considered taboo or religious groups that they didn’t understand, which is the goal of the event, Murry said.

“If we are able to get at least a handful of our students to reflect on their experience with the books they check out this year, we have been successful,” Murry said.