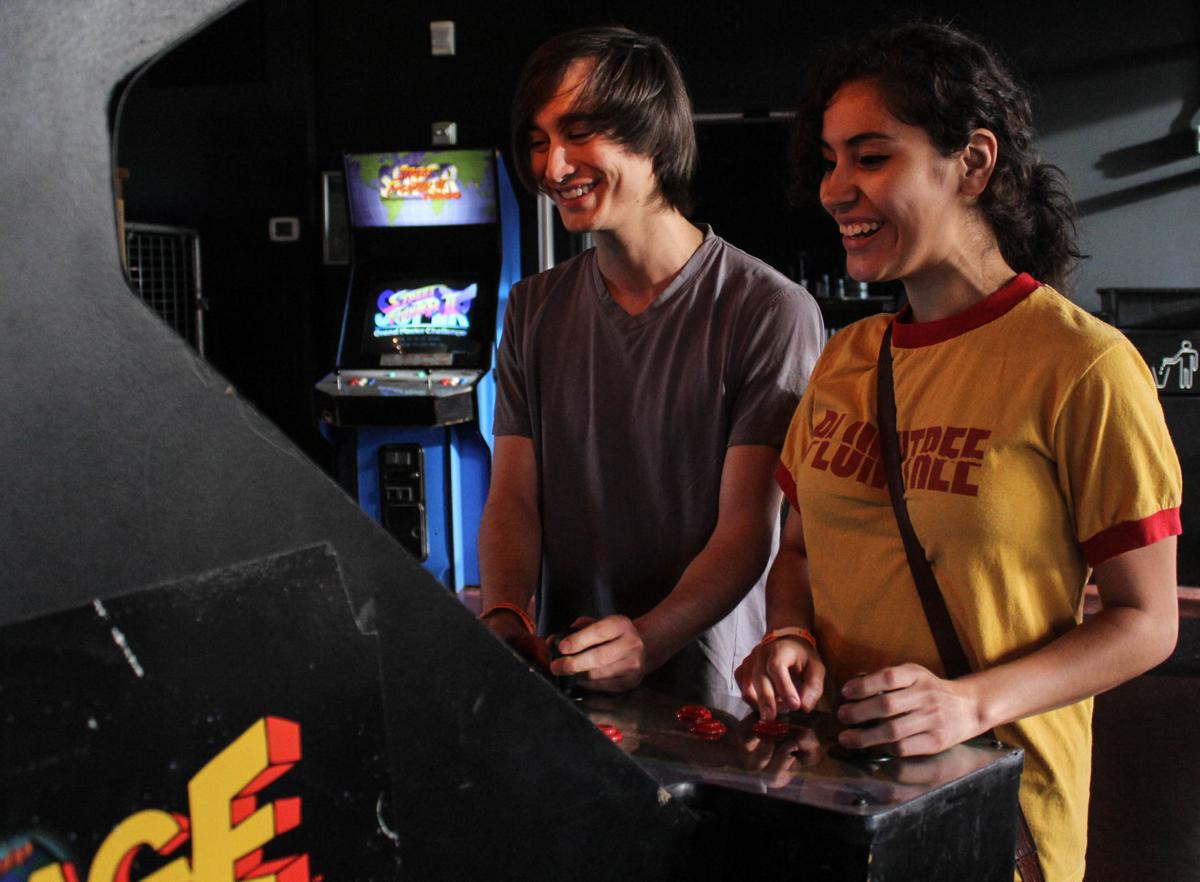 A joystick and buttons are used to play arcade games like Rampage World Tour. Arcade gaming dates back to the 1970s, and popular games such as Frogger and Pac-Man were introduced.

Eight-bit music envelops the room. One thumb mashes the B button while the other maneuvers incoming projectiles. Noises that resemble an explosion resonate from the speakers as points are tallied and the time bonus is applied. Level one is complete.

Video games are an integral part of many people’s childhoods. Whether it’s playing Pac-Man on an arcade cabinet or Minecraft on a cellphone, every gamer has a story.

“It’s a great time to be a gamer right now,” said David Kaelin, owner of Game Over Videogames and Classic Game Fest. “There’s just so much out there.”

Kaelin grew up in a simpler time for gaming, which usually had three controls: moving, jumping and shooting. Despite the simple controls, these games were usually more difficult than today’s, Kaelin said.

When he was a kid, games were easy to comprehend, he said. The challenge was beating the game’s increasing difficulty.

People could attempt a level 100 times before they found the pixel-perfect jumping spot to reach the next stage, only to die from another hazard they couldn’t see and retry one more time.

Kaelin said the only challenge now is learning the controls and mechanics. After learning the game, it plays more like an interactive movie than a challenge.

Alumnus Jugal Rajpal said some games, especially those on computers, have complicated controls that take away from the experience.

Rajpal says he enjoys games with simpler controls so he can focus on the gameplay.

Modern games can have over 30 controls by default, with the ability to assign even more commands.

Because Rajpal grew up playing games like Contra and Sonic the Hedgehog with his brother, he likes to have someone to play with or against.

Rajpal enjoys playing the FIFA games and learning new tricks he can show off. Although there is an online feature, he said he needs someone next to him to play.

“There must be someone there for the competition,” Rajpal said.

Every weekend, Walker would go out with his family to Blockbuster and rent the maximum games and movies allowed. Then, he’d beat them within the week, return them and grab two more.

He said some of his favorite memories were going to his cousin’s house with his brother and playing the games he rented.

What made the experience great for him was yelling when something exciting happened, getting angry when he lost, fighting for the controller and occasionally tussling when someone cheated.

Walker said he’d like to relive that experience, since he doesn’t have as much time to play games.

Kaelin said he also saw this need to relive the golden days of gaming and decided to go against the grain.

He grew up in the arcade and missed the excitement of a crowd intently watching one player as they gasped at losses and cheered after a boss was defeated.

Twelve years ago, he sought to bring this experience back by opening his first store. The idea was to focus on the customer and bring people together, rather than to simply sell a product.

With this in mind, he decided to host tournaments in his store, which grew over time from a small crowd to a full-fledged event hosted at the Palmer Events Center in Austin.

If retro isn’t their thing, gamers can relive the experience of multiplayer games at other events. Local area network parties can be hosted at a friend’s house or at a 25,000 capacity event center.

Bratcher said gaming appeals to everyone, regardless of gender, age, nationality or academic achievement.

At LAN events, she sees children and teenagers with their parents, squaring off against people three times their age. This experience builds a healthy rivalry and community that can’t be replicated online, Bratcher said.

Kaelin said his generation introduced their parents to games like Super Mario Bros. Now, his generation has children of their own to teach all the game’s secret spots and shortcuts.

Although he’s not in his prime, he can still run circles around his children while they’re sitting there with their mouths gaping, awestruck by how he knows where everything is and how to pull off a technique.

Kaelin tends to gravitate toward the classics, but he still enjoys playing some Minecraft and Skylanders with his family.

Kaelin said regardless of the generation of game or the gamer, people should still enjoy the feeling of sitting down and playing games with each other.

With people getting busier, technology modernizing and companies focused on selling games, something may have been lost, he said.

Online is a great tool to rank players against each other and find games at any time of the day, Kaelin said. However, it isn’t a replacement for grabbing a controller, throwing in a CD or cartridge and sitting down with a friend.