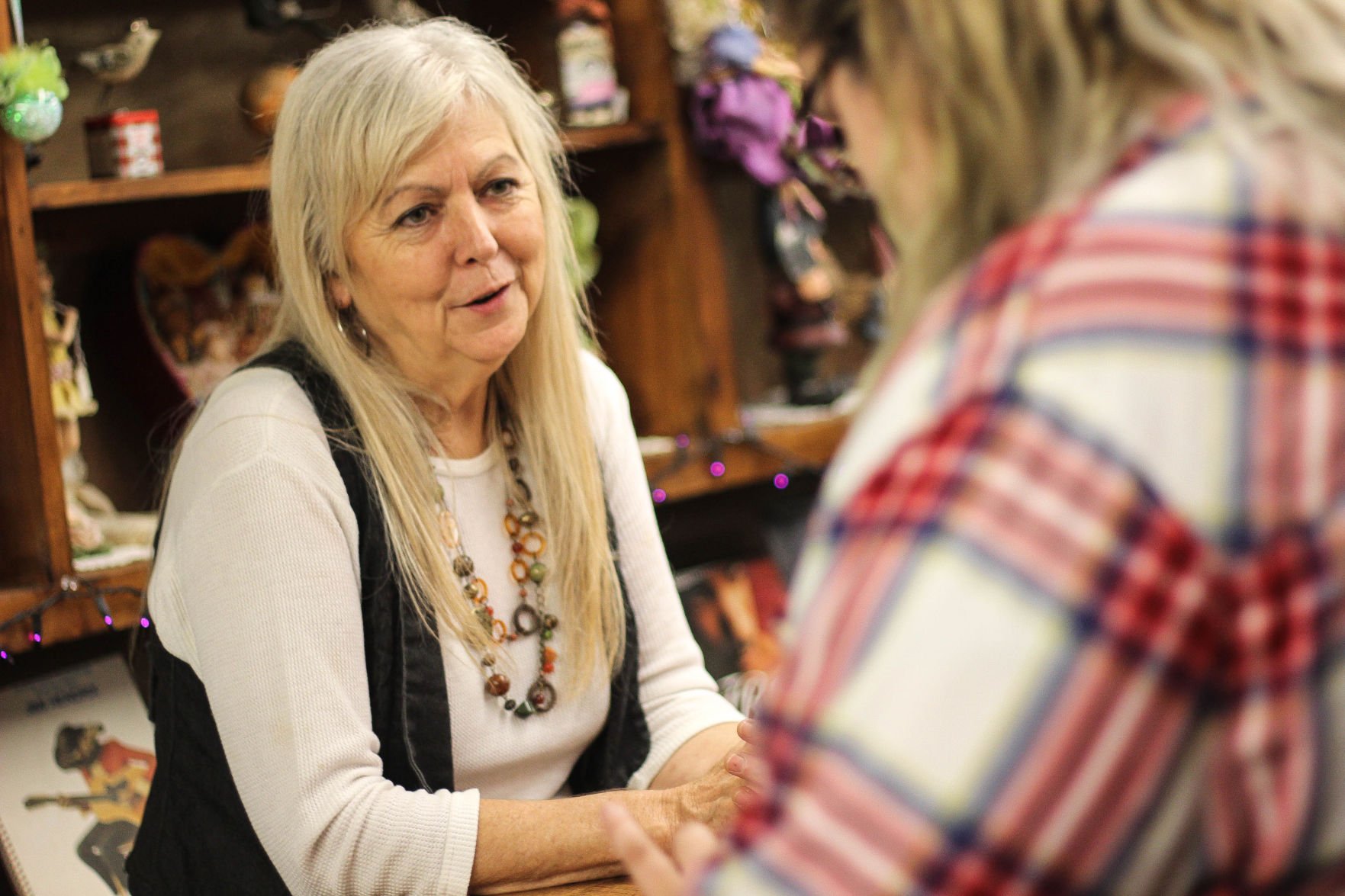 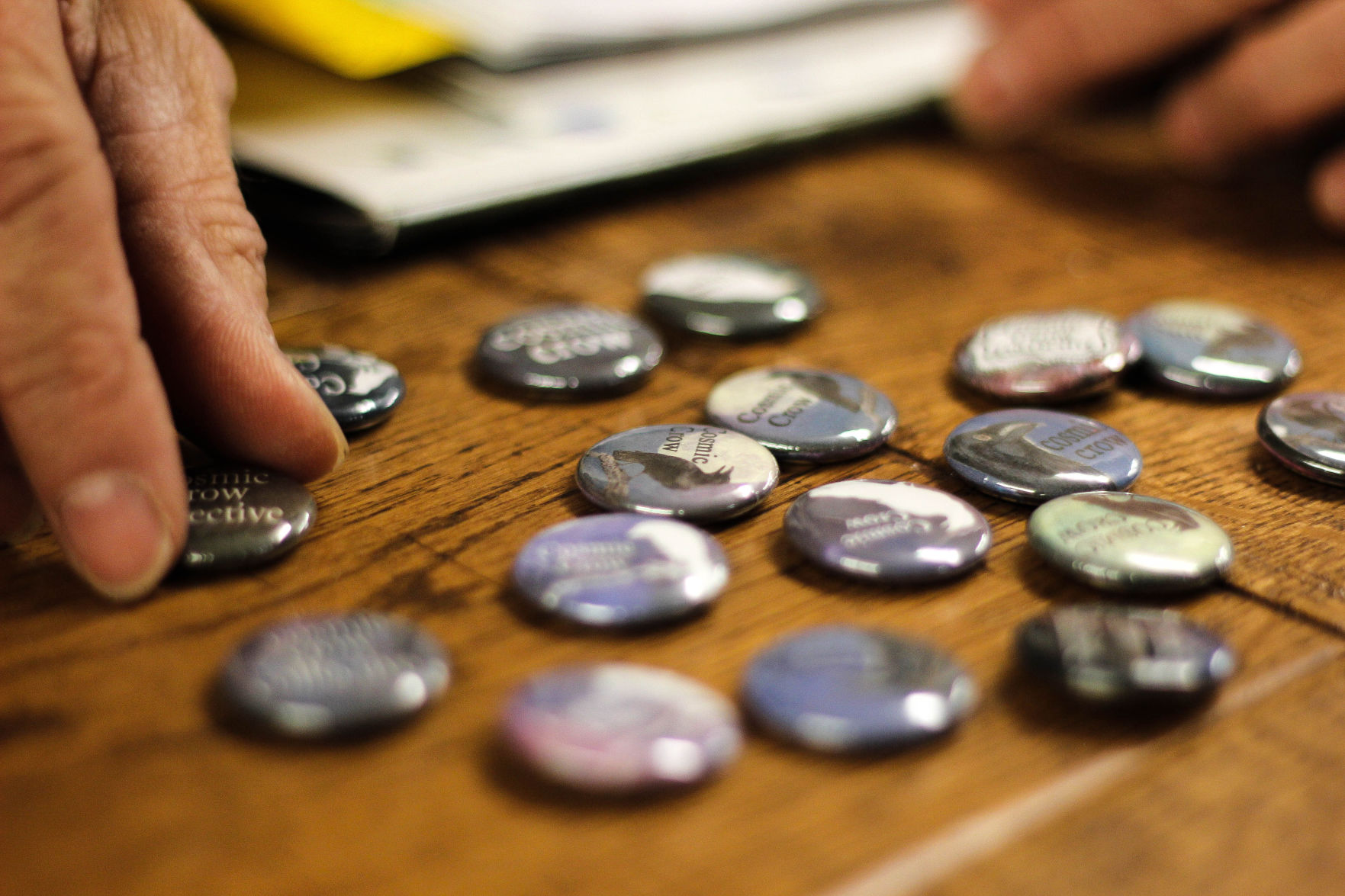 Tammie Carson, owner of Cosmic Crow Collective, lays out a set of buttons designed by her daughter Thursday night in her store.

Tammie Carson, owner of Cosmic Crow Collective, lays out a set of buttons designed by her daughter Thursday night in her store.

The Cosmic Crow, a short name for the store, is a consignment store that sells vintage clothing, items, antiques, local art, coffee, tea and incense. But the Cosmic Crow is distinct from a traditional storefront. The Cosmic Crow also offers classes in essential oils, tarot cards and guitar. Live music can be heard on the patio or in the store anytime anyone wishes to play the guitar or keyboard set up in the front of the store.

While Carson was looking for a retirement business, she and her daughter decided to open a store. Carson said the concept was meant to be simple, but from there, “Things got a little out of hand.” Once the store opened in April 2015, people who came in wanted to display their art, hold classes and play music.

Most of the vintage pieces in the store have been collected by Carson since she was a teenager. She said she originally needed the store just to have the space for everything she has collected over the years. The vintage clothing ranges from feathered hats to ‘80s beaded prom dresses to ‘60s mod babydoll dresses.

The consignment items in the store are from local artists and vendors, who are mostly Arlington-based. Carson said she is honored to give creative people in Arlington a space to display their work.

Hannah Kashmar, communication and broadcasting graduate student, began working at the Cosmic Crow when she was interested in becoming a vendor at the store. Kashmar creates fire paintings by using alcohol-based paint she sets on fire to achieve a desired design.

She said the vibe of the store is eclectic, and she enjoys burning incense and listening to whatever music she likes while she works at the shop.

Carson and Kashmar both describe Cosmic Crow as a “safe space.” Carson said she is open to all kinds of thinking in her shop, as long as it is not hurtful to others.

“A safe space is where a person can come and share their beliefs or ideas and not be ridiculed,” Carson said. “They just need to be able to speak their mind in a peaceful way and be received that way as well.”

This “safe space” atmosphere is cultivated by the freedom to play music whenever one wants to and through classes hosted at the store. Carson is currently working on getting a Lesbian, Gay, Bisexual and Transgender support group to hold classes at the store.

During events such as Thirsty Thursdays, a partnership between the Cosmic Crow and Division Brewing in which they combine their patios for like music, Carson also wants to make sure she provides a safe space for women.

“I want to promote the feeling that a young lady can come here, have a drink and listen to music and feel totally safe,” Carson said.

Live Music Thirsty Thursdays happen weekly at the Cosmic Crow. Oftentimes, there will be a drum circle that plays under Christmas lights, and spectators can watch from wooden chairs while drinking beer. Jeremy January began drumming 14 years ago when he lived in Austin. January said it was always easy to find somewhere to play in Austin. Once January moved to the Metroplex, it seemed more difficult, but he said, little by little, there are more venues to play at.

“It’s a community for sure,” January said.

Other music events include Acoustic Jam, where Carson’s friend plays Beatles covers. Wade Wadlington of Division Brewing said they alternate which weekends they have similar music. But live music is not tied down to events. As mentioned before, anyone can pick up an instrument or bring an instrument and begin to play at the store at any time. Carson said she often invites people who begin playing at her store to perform at one of her live music events.