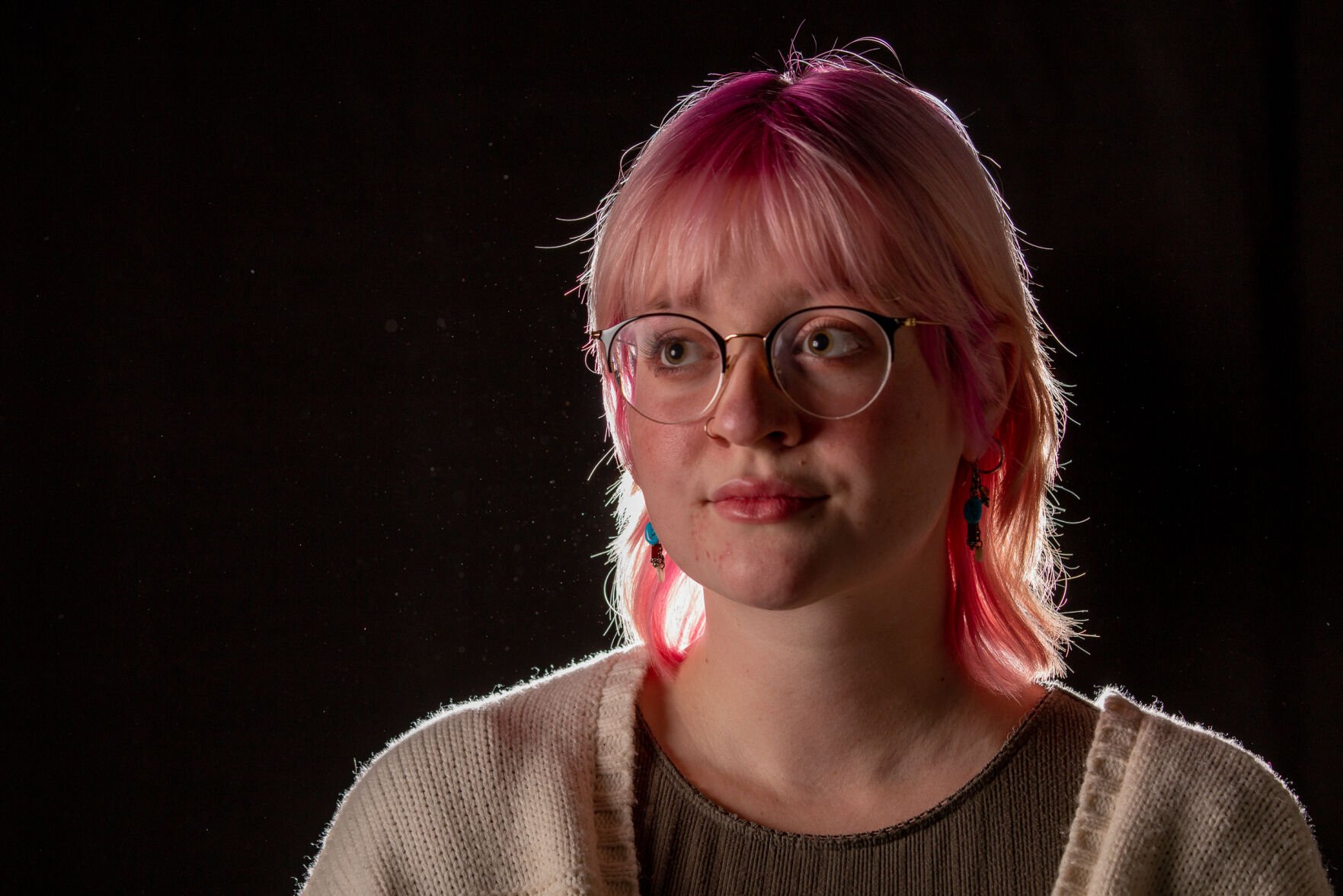 Music business junior Lillian Mechlem sits for a portrait Oct. 12 in the University Center. Mechlem is one of many students on campus who were forced to relocated due to their college campus closing. 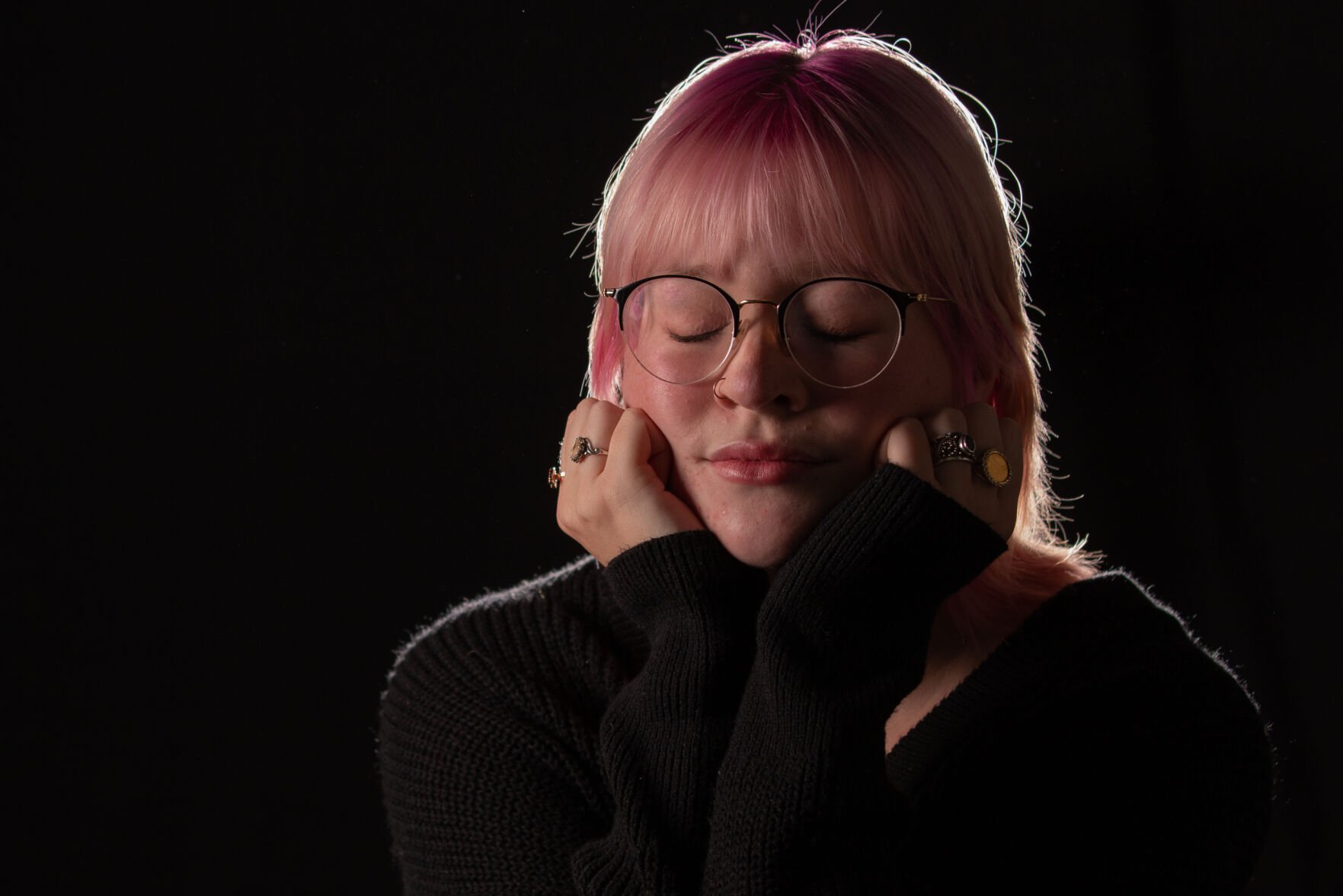 Music business junior Lillian Mechlem sits for a portrait Oct. 12 in the University Center. Mechlem is one of many students on campus who were forced to relocated due to their college campus closing.

Moving back home during the pandemic changed Lillian Mechelem’s life.

Once the pandemic began and UTA closed its campus, the music business junior was forced to move out of her dorm. The abrupt changes in her life were difficult to get accustomed to while living in a global shutdown.

“The theme for the whole year, with the pandemic, felt like seasonal depression,” she said. “Having to change things so soon, and then just shut down your life through the entire process, it’s just been hard dealing with.”

She’s open to talking about the stress that she’s had to deal with since moving home, even if it is a sensitive subject, she said. She knows there are other students who could be going through similar situations.

The coronavirus outbreak has pushed many young adults to move back in with their families. In July, 52% of young adults resided with one or both of their parents, up from 47% in February, according to the Pew Research Center.

About 9% of young adults have relocated either temporarily or permanently due to the pandemic. Twenty-three percent of all adults who moved due to the pandemic did so because their college campus closed, and 18% moved as a result of job loss or other financial reasons.

The fact that the pandemic has changed the way people go to school and work means that students are at home more and living in a virtual world, said Jessica Sanchez, assistant director of Relationship Violence and Sexual Assault Prevention program. This increases the chance for abuse to happen, whether it be physical, mental or emotional.

Mechelem’s parents got divorced when she was about 5 years old. After they separated, she grew up living with her father.

“Throughout time, he was very verbally abusive, and mentally skewed to where he would manipulate me mentally and make me feel bad about a lot of things that I shouldn’t have felt bad about.”

She moved out to start college during the fall 2019 semester, which gave her temporary relief from the stress of living at home. When the pandemic began and the university closed, she was forced to move out of her dorm. With no family or friends close by that could give her a place to stay, she moved back in with her father.

When she moved back, she noticed the same patterns of verbal abuse she experienced while growing up with him. She started to feel worse and worse each passing day the pandemic kept her stuck at home.

Things didn’t get “terrible” between the two until after her car accident.

After months of stress, Mechelem had planned a road trip to Michigan with some friends, and on her way to buy camping gear Aug. 15, she got into an accident and totaled her car. Although no one was seriously injured, she did suffer some scratches and bruises.

Throughout the year, she had been so focused on school that she didn’t have time for much else, Mechelem’s boyfriend Dillon Morrison said. Nevertheless, he’s known her as someone always with a smile on her face.

“She’s super bubbly, kind hearted; she cares probably more about animals than humans, but she takes care of people just as well,” Morrison said. “She’ll go out of her way to make someone’s day.”

She got into an accident while trying to enjoy herself on a vacation, he said. That was the moment he noticed her attitude start to change.

“It’s definitely been a complete 180,” Morrison said. “I really [saw] her mental health deteriorate towards rock bottom to the point where she needs a helping hand. She can’t keep fighting by herself because it’s destroyed her so much.”

The accident rattled her, Mechelem said. That was just the beginning of her troubles.

“My whole world was completely shaken up in a matter of a month,” she said.

Mechelem’s father had bought her the car for her when she was 16 years old and paid for her insurance. When she got into the accident, she knew she had to call him.

When he learned of his girlfriend’s accident, Morrison drove as fast as he could to make sure she was OK. The damage he saw shocked him.

“I normally think of a car crash as a little fender bender, but this [was a] really, really bad car crash, like completely totaled,” he said. “Every side of the car smashed in, windows blown out, hit a pole, [the] other car was totaled. And it really kind of upped the ante of, like, what we were dealing with.”

Mechelem’s first thoughts after the accident were all about how angry her father would be and how he would react, he said. Morrison didn’t feel like those were the thoughts his girlfriend should have after such a life-threatening accident.

He saw Mechelem’s mother and other friends come to check on her and provide support in the days after the accident, he said. That’s what you would expect from the people you love and who are the closest to you.

“I think the hardest thing was while all of this happened, her dad was away at the lake house,” he said. “Once she was back at home, it just felt kind of empty because her dad didn’t come back for almost half a week, even though he was only an hour and a half away.”

In the weeks following her accident, Mechelem learned from her therapist at the time that she had post-traumatic stress. She could no longer work because she had to recover, both physically and mentally.

She spent a lot of time alone in her room to focus on the 20 class hours she was taking at UTA.

Throughout this time, she felt like her father belittled her stress and emotional and physical trauma. He didn’t try to understand what she was going through.

“It was stressful all around after the wreck,” she said.

Even the little things her father said to her hurt so much more, she said. Her therapist told her that after an accident, people are much more sensitive to things that happen around them.

After a week spent dog sitting for a close friend, Mechelem returned home, and her father refused to speak or even look at her.

Soon after, while she was in bed waiting for her online class to start, he abruptly came into her room and yelled at her.

“He called me a narcissistic bitch.”

She had been confined mostly to her room to allow herself the time to recover. She was shocked and confused.

He told her to get out of the house or to treat him with more “respect,” she said.

“It was all just very, very toxic.”

She felt like she had done everything she could to please her father. After all, he was the one helping her pay for college, and she tried to show gratitude by keeping her grades up and living by his rules.

Then she finally decided to break away and move out. She couldn’t deal with the emotional turmoil of living with her father on top of school and work and trauma from the wreck.

She moved from house to house, staying a few days with her sister, a friend and then her mother, unsure of what was to come next. Her sister eventually introduced her to a friend who had experienced something similar at Mechelem’s age.

Since her father had been her main provider, taking the step to leave was not easy. She had to work with her mother to learn how to support herself.

“We [were] figuring out things where I could break away from my father,” she said. “He was controlling my life financially, he paid for my school, he paid for my car, I was on his phone plan, I’m on his insurance. He was my main provider.”

Although he provided these things for her, she felt like it was because he wanted to feel a sense of entitlement, she said. Not because he was her parent and wanted to support her.

After her father stopped making payments, she lost access to the therapist that she’s had since she was a junior in high school, she said. Now, the one person she has had to rely on during one of the most difficult times of her life has been her boyfriend.

Even through all of the stress of moving from house to house, she decided to write her father a letter in an attempt to communicate with him respectfully, she said. She even had her therapist review it.

He responded with an email and accepted blame for some of the points that she made in her letter. She felt like that was a big step for him, to finally admit to the things he had done.

Being forced to move from campus played a big role in everything that’s happened, but even when she wasn’t staying with her father, she still felt micromanaged, she said. If she hadn’t moved back home, she would still be connected to him.

Her biggest struggle through all of this has been learning to love herself. Growing up with the kind of person her father is made her put herself down, she said. Her biggest advice to anyone going through something similar or even just dealing with depression is to try and love yourself.

“I feel like the most important thing is to love yourself through all of it and to know that every individual is strong and every individual has a path for them where they’re supposed to be,” she said. “It’s just a bump in the road, and that’s what I’ve been really trying to handle and deal with.”