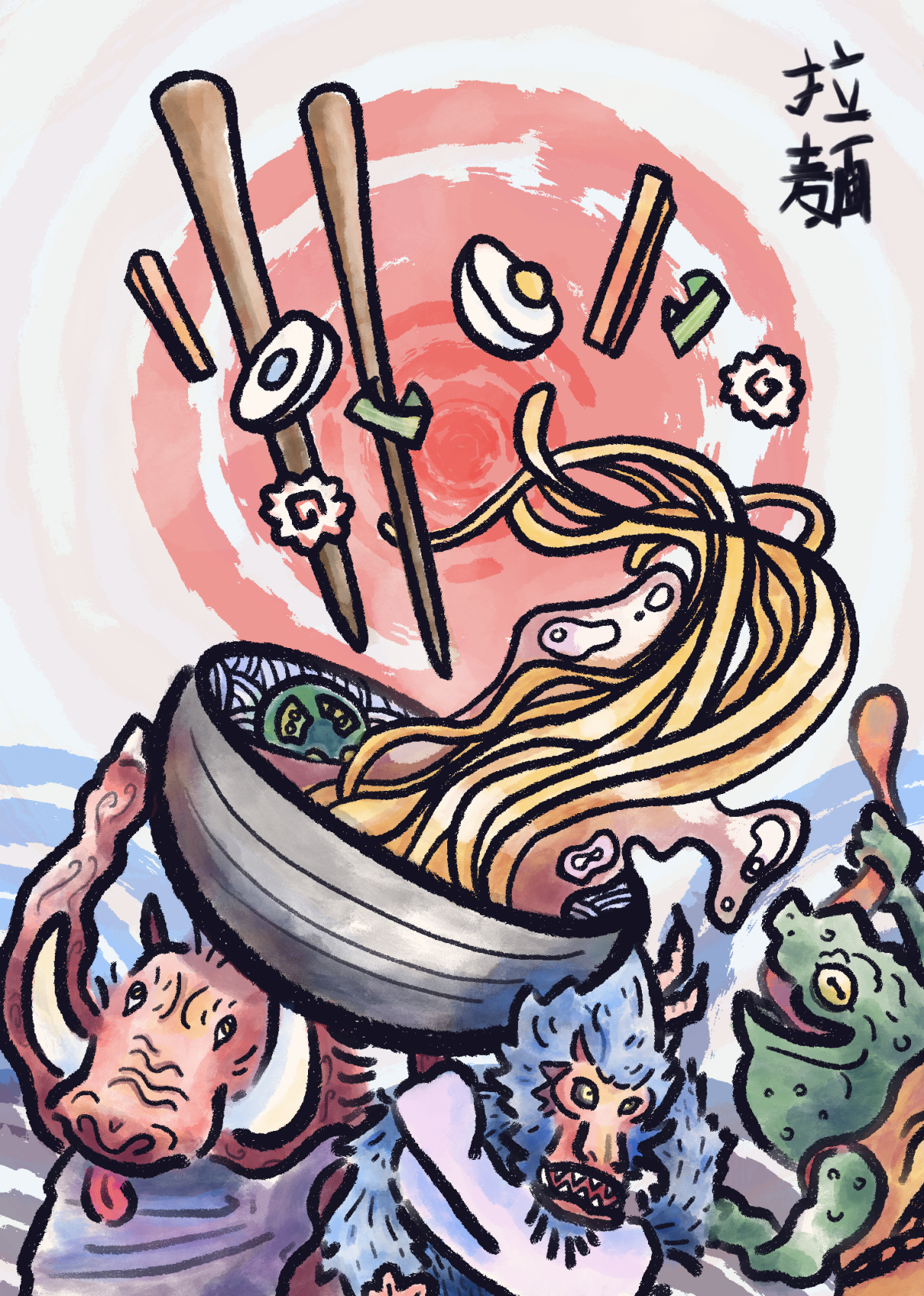 Originating from China yet commonly known as a Japanese dish, ramen has become a popular American comfort food.

Philip Sanusi, political science and public health junior, said ramen is the perfect dish to enjoy during social distancing because nothing brings friends and family together like a warm dish of comfort food.

“In terms of well-rounded, cost-friendly and delicious [foods], I think ramen is the best way to go,” he said.

As well-rounded as it is, the history, ingredients and popularity of ramen are easily as diverse as the dish itself.

Although ramen is commonly hailed as a Japanese dish, the word originates from China and didn’t come to Japan until the sixth century, said Merry White, anthropology professor at Boston University.

The dry, pre-packaged, instant ramen that most college students have come to know and (maybe) love was invented by Japanese food executive Momofuku Ando in 1958. Ando introduced Cup Noodle in 1971 and created a vacuum-packed portion of instant noodles for a Japanese astronaut aboard the Discovery space shuttle in 2005.

Instant ramen came during a desperately hungry period after World War II, White said. During Hurricane Katrina and other disasters, ramen served as an inexpensive provision for many in need.

“It was kind of an emergency food,” she said.

What sets ramen apart from other simple foods, though, is its range, White said. It has two almost polar-opposite dimensions.

On one hand, ramen is a simple, two-minute college staple. But on the other, ramen is a culinary masterpiece.

Instant ramen was a side product of this dish. However, “chef-y” ramen didn’t start that gloriously. It was a food for drinking nights in Japan.

With its polarity comes a world of culinary creativity.

“Instant ramen gives [people] the freedom to do whatever they want with it,” White said.

Korean American chef Roy Choi’s instant ramen recipe consists of dropping a raw egg into the boiling noodles and topping it with butter and American cheese.

Nothing is off the table for American-style ramen. Japanese ramen, though, is a completely regional food, White said. There is no “authentic Japanese ramen” or standard recipe.

Tonkotsu ramen from Fukuoka prefecture is boiled at a high temperature with pork bones to produce a thick, sticky, milky broth. Yokohama ramen has a thinner broth that is sometimes cooked with chiles.

Psychology junior Nusrat Jahan said she likes to boil her instant ramen in chicken or vegetable stock instead of water to add flavor. She’ll add whatever she can find in her kitchen: sausage, peas, tomatoes and anything else.

“You can throw anything in, and it tastes good,” she said.

When she gets bored of eating ramen, Jahan boils the noodles in less water, drains them and then stir fries them with onions and chile peppers.

The simplicity of instant ramen leaves room for tasty additions

Upgrade those plain instant ramen noodles to mimic the style of the authentic Japanese dish.

Sanusi said he enjoys cooking ramen from different cultural perspectives. When he cooks it for his friends or roommates, he said he’ll add hot seasonings to give it a spicy kick to their liking. When he’s craving Asian food, he’ll cook ramen more traditionally, with soy sauce and eggs for a more savory flavor. When he cooks from his own Nigerian culture, he’ll add extra spice and simmer the noodles with red onions, carrots and peas.

Although it’s become so widely popular and diverse, ramen is still commonly seen as a quick “emergency” meal for college students.

“It’s still used in a ‘filling the gaps’ sort of way,” White said. “It’s also filling the gaps for students who buy packets of it and maybe add an egg to it.”

Jahan cooked her first pack of instant ramen when she was 5 years old. Her mother would offer her ramen as an afternoon snack, and it quickly became her favorite food.

Once she started college, Jahan started eating ramen much more frequently as a quick and easy go-to meal.

Migrating from Taiwan to the States, the mixture of milk tea, shaved ice and tapioca balls (or boba) is a unique and trendy beverage.

Instant ramen isn’t just for college students, though. It’s a popular commodity in American prisons, White said. Inmates find different ingredients to add to their ramen and crumble the dried noodles over their meals as a type of garnish.

Ramen might seem basic, but its reach has extended across the world, and now almost everyone can enjoy it.