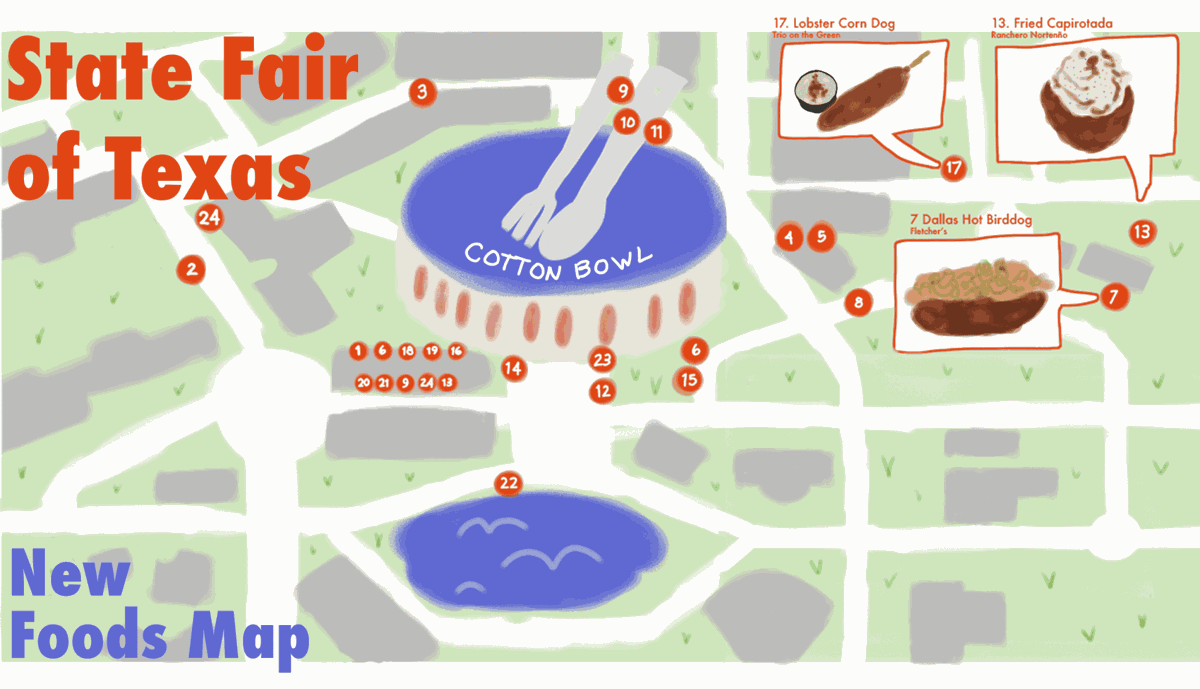 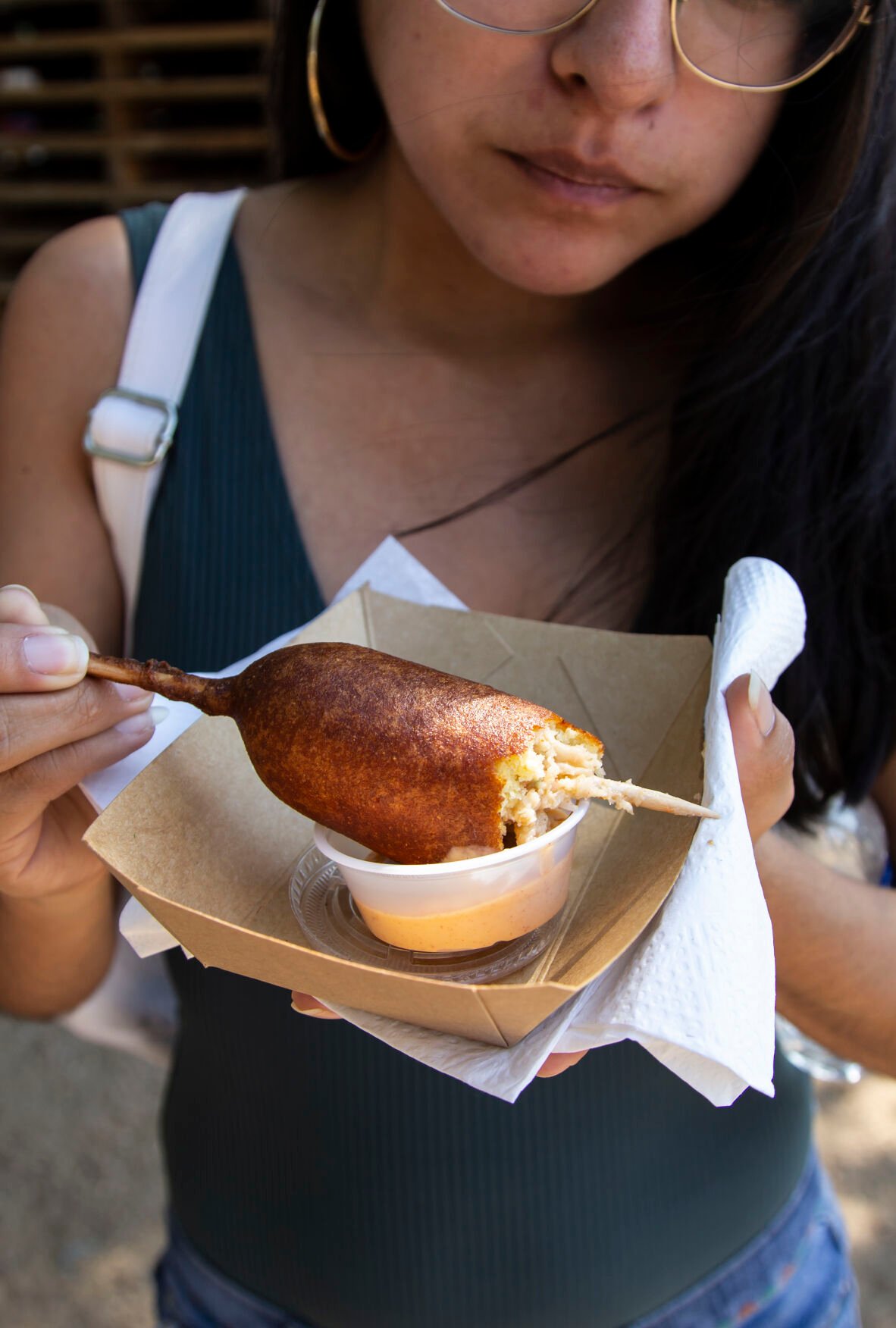 The lobster corn dog dips in a sauce at the State Fair of Texas on Oct. 7 at Fair Park in Dallas.

When entering the State Fair of Texas, one can’t help but notice rows of food vendors and concessionaire booths lining both sides of almost every path. The smoky aroma of turkey legs combined with the sweet scent of funnel cakes fills the air.

Turkey legs and funnel cakes are fair staples, but the unique fair foods on the 2021 New Foods Map are once in a lifetime. After hosting a socially distanced Fair Food Drive-Thru last year, concessionaires spent the off-season brainstorming food items.

Katecey Harrell, The Shorthorn life and entertainment editor, and life reporter Ritchie Manalastas went on a food adventure Oct. 7 to sample some of the menu items that the State Fair of Texas’ 2021 New Food Map offers.

They found some delicious items, and some not so delicious items. But, it’s the cuisine, culture and creativity behind these items that matter. Throughout this journey, they will share their opinions as they talk to the vendors about these items.

Around nearly every corner, fairgoers can get a whiff of and purchase savory or sweet deep- fried treats. With the fair ending Sunday, people should spend the remaining days trying few items.

Bailey’s owner Rose Deschenes said they are a sweet and savory hush puppy cornball with freshly-made jam of bacon, onions, brown sugar, syrups and spices ladled over the top. Then, they are topped with a squirt of ranch dressing and homemade candied jalapeños.

They tried different combinations before her grandson picked and named the final product, she said.

Deschenes said she’s had a booth at the State Fair of Texas for 34 years.

The second item on the map is The Bag of Eggrolls, located at Crunchie’s Eggrolls and More.

Wayne Lo, Crunchie’s Eggrolls and More owner, said he got the idea for the egg rolls when he and his wife visited South Korea and saw how quick and convenient the street food was.

Fairgoers will receive a variety of egg rolls in a bag, consisting of mac and cheese, pizza, original and samosa egg rolls.

Harrell: A Crunchies vendor hand- ed us a brown paper bag of egg rolls in an assortment of sizes. Upon inspection, the golden-brown cylindrical and triangular savory rolls were easily identifiable. A tint of red peaked through the end of the pizza roll, and a green sauce oozed from the samosa roll.

The pizza roll was exactly that. A string of mozzarella cheese hung from the roll after taking the first bite, and the taste of marinara sauce filled my mouth. I devoured the entire roll in two bites and went back in for another.

This time, a triangular samosa roll appeared from the bag. The uniquely shaped egg roll tasted even more unique. I wasn’t a fan of the spice, it wasn’t my favorite, as the aromatic flavor was too strong for my taste.

Nonetheless these items are a refreshing cultural addition to the fair.

A smoked turkey frank is dunked in a fiery seasoned batter and deep-fried, then smothered with rich and creamy mac and cheese and finished with fried jalapeños and then Cholula drizzle on top.

Manalastas: I had a load of flavors bursting in my mouth: the savoriness of the hot weiner, creaminess of the mac and cheese, a kick from the fried jalapeños and the spiciness of the Cholula.

Harrell: A lot was going on here. Visually, who wouldn’t drool over a mac and cheese-covered corn dog? But something about the item didn’t sit right with me. I felt full after two bites and couldn’t finish it. With the Texas heat blaring down on me, a piping hot, spicy, thick and heavy concoction was the last thing I wanted.

Deep Fried Pancakes, the eighth item on the map is located at Vandalay Industries

Vandalay Industries owner Abel Gonzales said he wanted to create something that wasn’t too difficult to make and could be easily described in the New Foods Map. During the pandemic, he didn’t have access to as many resources, so he created the deep-fried pan- cakes himself, he said.

One can top the homemade, individual bite-size pancakes with any of Vandalay Industries’ home- made syrups.

“The best way to eat the fried pancake is with a butter pecan maple syrup and bacon on top,” he said. “You get the whole breakfast experience.”

His family—lifelong fairgoers, have baby pictures of him at the fair, so having a booth there is a dream come true, Gonzales said.

The food item features a mixture of two shredded cheeses sprinkled over unrefined whole cane sugar syrup with raisins layered on top of the bread. Spices are poured over the mixture, then baked.

The resulting pudding is battered and fried, then crowned with whipped topping and covered with a drizzle of dulce de leche. A shake of fresh ground cinnamon and bright sprinkles finishes the desert.

One of the 2021 Big Tex Choice Awards Semi-Finalists is the Lobster Corn Dog, the seventeenth item on the menu, located at Trio on The Green.

It’s easy to make something in a kitchen at home, but it’s tricky to replicate it for all of the people who come through the State Fair, Sjolander said.

They sold almost 7,000 Lobster Corn Dogs on the first weekend, he said

“We brought all the lobster in the entire state of Texas,” Sjolander said. “We’ve gone everywhere from Houston to Austin, San Antonio up to Oklahoma City.”

Harrell: While it looked like a thicker corn dog, the insides were much softer. At first, I was afraid the seafood taste would be too strong for my liking, but this item was my favorite of the ones we tried. On its own the item was good, but the aioli sauce elevated it. All fairgoers should stop by Trio on The Green and try this one.

Manalastas: I took a bite, and it was like eating a crab cake with the chunks of food inside and the texture is similar to hush puppies. Fairgoers can find the Deep Fried PB & Razbrûlée, the ninth item on the menu, and the Texas Easter Eggs, which is 21st on the map, at Scrumbscious Pieshakes.

Despite its name, the Texas Easter Eggs are a savory dish, Scrumbscious Pieshakes co-own- er Gloria Howard said. Her son described it as a deconstructed jalapeno popper.

Fonza said they made the Easter Eggs from cream cheese, Monterey jack cheese, brisket, bacon, green chilies and jalapeno. Then, they are rolled in seasoned bread crumbs, deep-fried and served with regular and chipotle ranch.

“We never have any problem with people not liking our products,” Howard said. “Our point of difference from most fair foods is that ours is fresh food.”

The State Fair of Texas requires a lot of preparation and dedication from vendors to create products fairgoers will appreciate. If you find yourself craving something one-of-a-kind, check out the items on the New Foods Map.