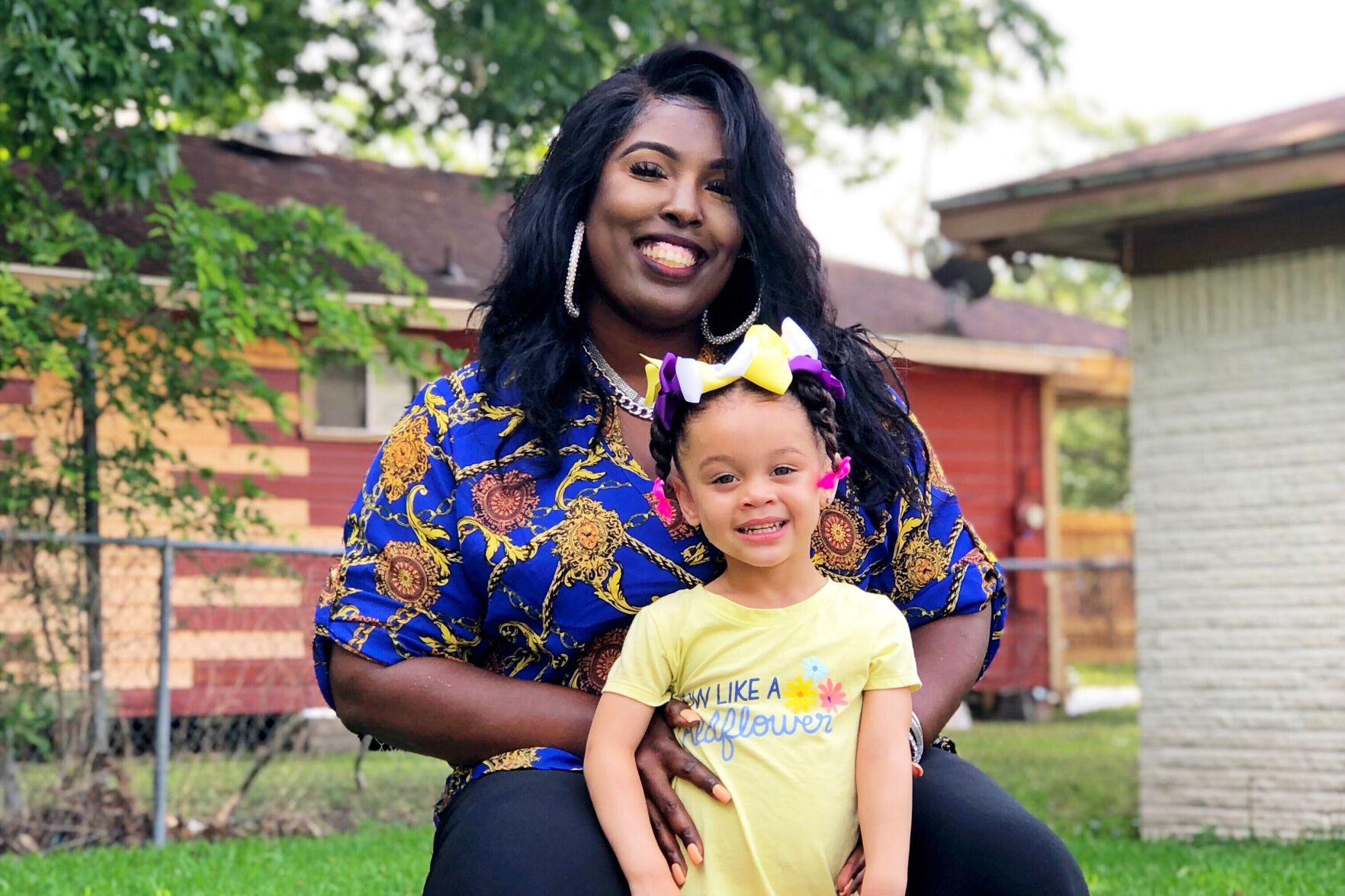 Brianna Baucum with her daughter Journi 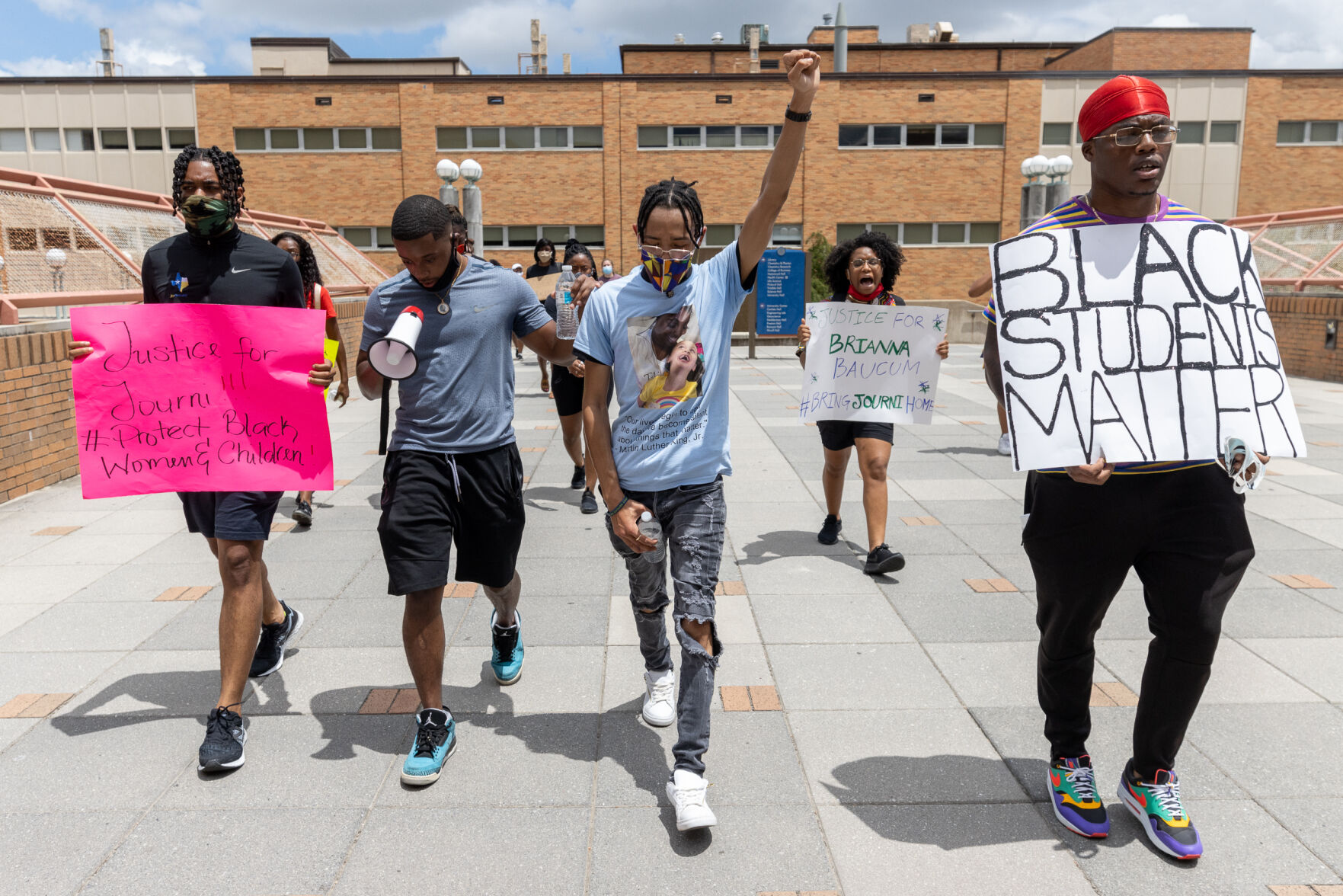 Demonstrators march across a pedestrian bridge on campus during a rally in support of Brianna Baucum on July 25 in Arlington. Demonstrators marched from University Village apartments across campus to a UTA Police sub-station. 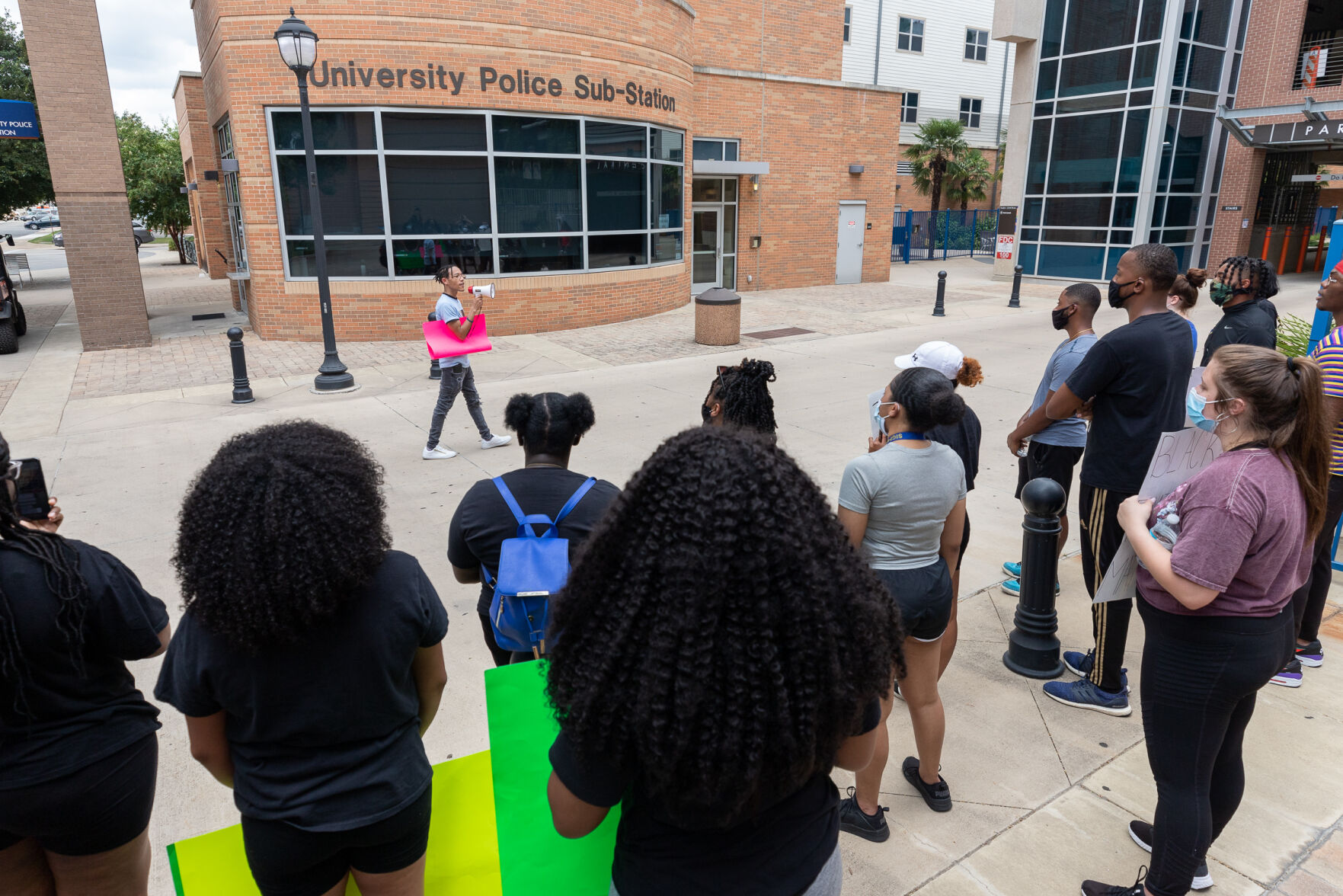 People gather around a UTA Police sub-station near the Park Central Garage during a rally in support of Brianna Baucum on July 25 in Arlington. Members of UTA and the local community came out to support Brianna Baucum and ask for the return of her daughter, Journi, from child protective services. 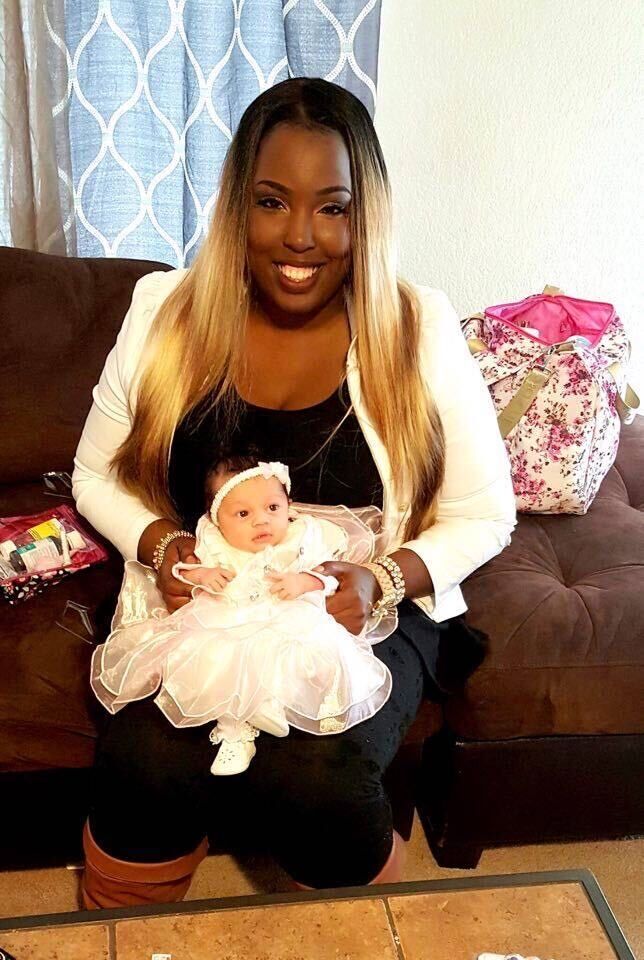 Brianna Baucum with her daughter Journi

Brianna Baucum is Journi Baucum’s adoptive mother, but she has been with the child from the moment she was born — that is until the 4-year-old was taken to child protective services following multiple child abuse allegations.

Since then, Arlington community members have marched through campus twice, demanding that Journi be returned to her mother.

They carried signs with slogans like “Justice4Journi,” and some wore T-shirts bearing a quote by Martin Luther King Jr.: “Our lives begin to end the day we become silent about things that matter.”

Baucum has been far from silent, speaking out against the allegations.

She said child protective services told her the first few allegations were made by her former neighbor, who is also a UTA student. At one point, the student claimed Baucum had beaten Journi with a wine bottle. Later on, she claimed Baucum had left the child at a gas station.

The allegations, which Baucum said are untrue, made her feel unsafe, and she decided to move to campus.

Snow did not respond to a request for comment by the time of publication.

She believes the answer is her race.

On Sept. 16, 2019, Baucum said she was pulled over for allegedly running a stop sign. When the police officers attempted to arrest her, Candace Robinson, Baucum’s friend who was also in the car at the time, told the officers that running a stop sign isn’t a fair reason for an arrest.

The officers informed the women that there was actually a warrant out for Baucum’s arrest for not putting Journi in a car seat. However, when they arrived at the police station, a warrant could not be found, and Baucum was released.

The next day, officers were dispatched to Baucum’s residence in response to another child abuse allegation. Baucum said she is unsure if the allegation came from the same student who had made the previous allegations.

Baucum said Journi had already been placed in a foster home on Aug. 28, after she was found with two injuries, which Baucum said UTA Police Detective Michelle Stellato falsely described as bite marks.

Baucum claims one of the injuries was from Journi being restrained during an MRI scan requested by child protective services, and Baucum’s friend, LaShanda Scott, confirmed this. Baucum said she had been taking daily pictures of Journi to disprove the allegations and never noticed a second injury.

Scott said she has known the pair for years, and that Baucum is an excellent mother.

In March 2016, Journi’s then-pregnant biological mother reached out to Baucum, asking her to adopt the baby when she was born. She would have placed her in a foster home otherwise. Remembering her own foster care experience, Baucum wanted to prevent the child from going through the same struggles.

She received support from mentors and agreed to legally adopt Journi about two weeks later.

On March 31, 2016, at about 2 a.m., she got a call that Journi’s mother was going into labor. Baucum immediately made the four-hour drive from Killeen to Katy, Texas, and arrived before the mother was dilated.

Journi was born at 8:04 a.m. and placed on Baucum’s chest. Baucum was the one who named her.

“[Journi] has shown me the true definition of family, of love, of protecting someone that you would give your all to, your last breath to,” she said.

Since the adoption, Scott said Baucum has sought to raise Journi to be as happy and healthy as possible.

“Anything that Journi was dealing with — things that [Baucum] didn’t understand — she always made sure that she went out of her way to get the knowledge, to make sure that she was doing the best for her child,” she said.

Scott said she saw them at least monthly and never saw evidence of abuse, which as a teacher she is required by law to report.

Baucum said Journi had been sexually abused during her time in foster care and she’s now only allowed to see her adoptive daughter for one hour on Wednesdays. She has been fighting to bring Journi home for 343 days.

On Sept. 17, the same day officers were dispatched to Baucum’s home for the second time, she and Robinson went to the UTA Police station to file a complaint. The police report of the incident by Stellato describes Baucum as “argumentative” with officers at her house and “in a rage” at the station. Baucum said Stellato also falsely named Robinson as Journi’s biological mother.

Robinson said she would describe Baucum’s behavior as emotional, not argumentative.

“It seemed like [the officer] was trying to get her all wound up,” she said.

On Oct. 2, 2019, Baucum met with Student Conduct director Dayna Ford to address the situation. Baucum said Ford described her as a “belligerent, loud monster” after reading the police reports.

Ford did not respond to a request for comment by the time of publication.

Following her meeting with Ford, Baucum was placed on academic and disciplinary probation for allegedly being disruptive, obstructing police and using inappropriate language. She was also prevented from pursuing her internship, which has delayed her graduation. Before then, she had a 3.6 GPA and was a 2019 Mary I. Gourley scholarship recipient.

Black on Campus: How UTA can tackle hiring, education practices and police relations

On Jan. 24, officers came to Baucum’s residence again in response to another abuse allegation. She was undressed at the time but had been told by Community Standards that she was required to let them in.

She said she was on the phone with Scott, but an officer turned her phone off, handcuffed her and put a shirt over her head. She was then driven to the station.

Baucum sounded frustrated as she recounted feeling unsupported by the authorities and being surveilled by campus police.

“Even now, if I go outside, there will be police outside of the home,” she said. “Wherever I go on campus, police are always following me, stopping me for whatever reason.”

She mentioned leaving a campus event in February where she recounted her experiences with campus police, and finding UTA Police officers outside looking for her.

“It’s not just them following me,” she said. “They make their presence known as far as being intimidating, even to the point of where I feel bullied.”

Baucum relayed her feelings of harassment and lack of support to various officials on campus. She also told Stellato that she is without familial support because she grew up in foster care. Baucum said Stellato concluded that she suffered from mental issues based on a 2010 article written about Baucum’s foster care experience, and therefore needed to be surveilled.

An investigation was officially opened on May 12, and the Title IX office decided on July 1 that Baucum had violated Title IX, a federal law which prohibits discrimination, sexual assault and domestic violence in schools.

UTA Police Chief Kim Lemaux stated in an email that investigators conducted a “thorough, professional and unbiased” investigation. Based upon the evidence they uncovered, charges were filed against Baucum and accepted by the Tarrant County District Attorney’s Office. However, since the case is still an open investigation, UTA Police declined to comment further.

Feeling desperate, Baucum sent a mass email to people who had attended a Black Lives Matter town hall meeting on June 1 that she felt could help her. She titled the email, “A Black Life on UTA Campus that has not mattered.”

In the email, she detailed her experience with accompanying photos and screenshots and ended with a list of demands. These included an investigation of the UTA Police Department and a demonstration of support from the university for her and her family.

Although seemingly lacking support from university officials, Baucum has received support from various student leaders, like Nicholas Hawkins, UTA NAACP vice president, who took up the responsibility of spearheading the protests.

The political science junior said he has been organizing protests and civil disobedience in the Metroplex since he was in high school, and when he learned about Baucum’s case in a group chat, he immediately reached out.

“If we don’t raise awareness of these issues, injustice will just continue to rear its head, and we can’t live in a society like that any longer,” Hawkins said.

He, the other organizers and Baucum’s attorneys are currently trying to set up a meeting with university administrators.

There is a petition for Baucum’s case titled “Justice for Journi and Brianna!” It is addressed to state Sen. Beverly Powell and the Texas Rangers and has over 5,100 signatures at the time of publication.

Baucum is being represented at no charge by defense attorneys Andrew Wilkerson and Michael Campbell, the same attorneys that represented Edward Thomas in the high-profile case against Muhlaysia Booker in 2019.

So far, they have been to court once and have another date scheduled. Wilkerson said while there is evidence to support that Journi was injured, there is none to support the child abuse allegations.

He believes Stellato has a personal vendetta against Baucum, which the lawyers plan on revealing. He said they have tried to set up a meeting with her, but she has not returned their calls.

The defense team has three goals.

“Firstly, for Journi to come home,” Wilkerson said. “Secondly, to cleanse [Baucum] and clear her of all criminal accusations. And thirdly, for [UTA Police] to quit doing people like this. Period.”

Although Baucum doesn’t know how soon she and her attorneys can achieve these goals, she said she’s sure of one thing: she doesn’t want to spend one more day without her daughter and hopes to bring Journi home as soon as possible.

Black on Campus: Students and faculty share their experiences with racism at UTA