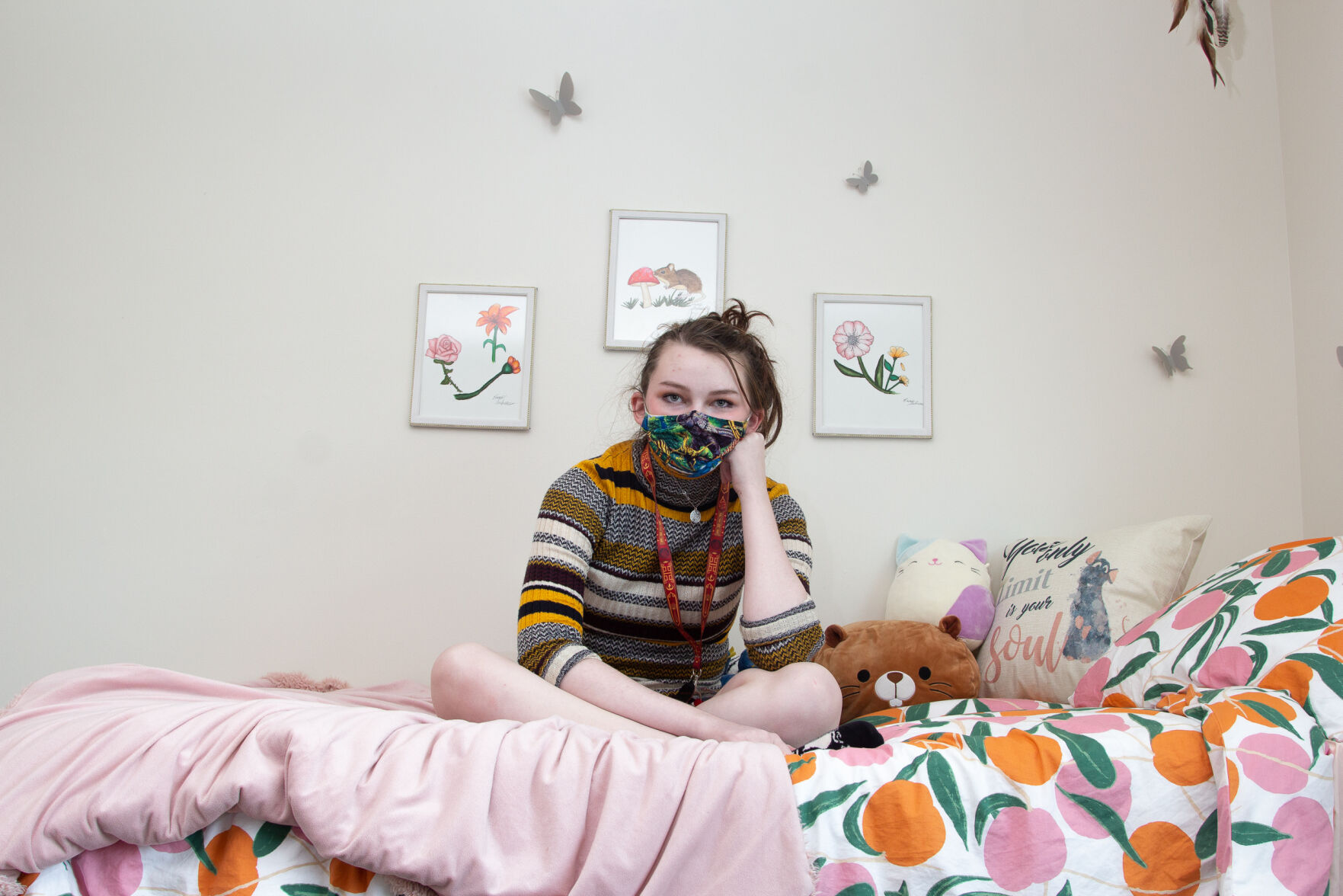 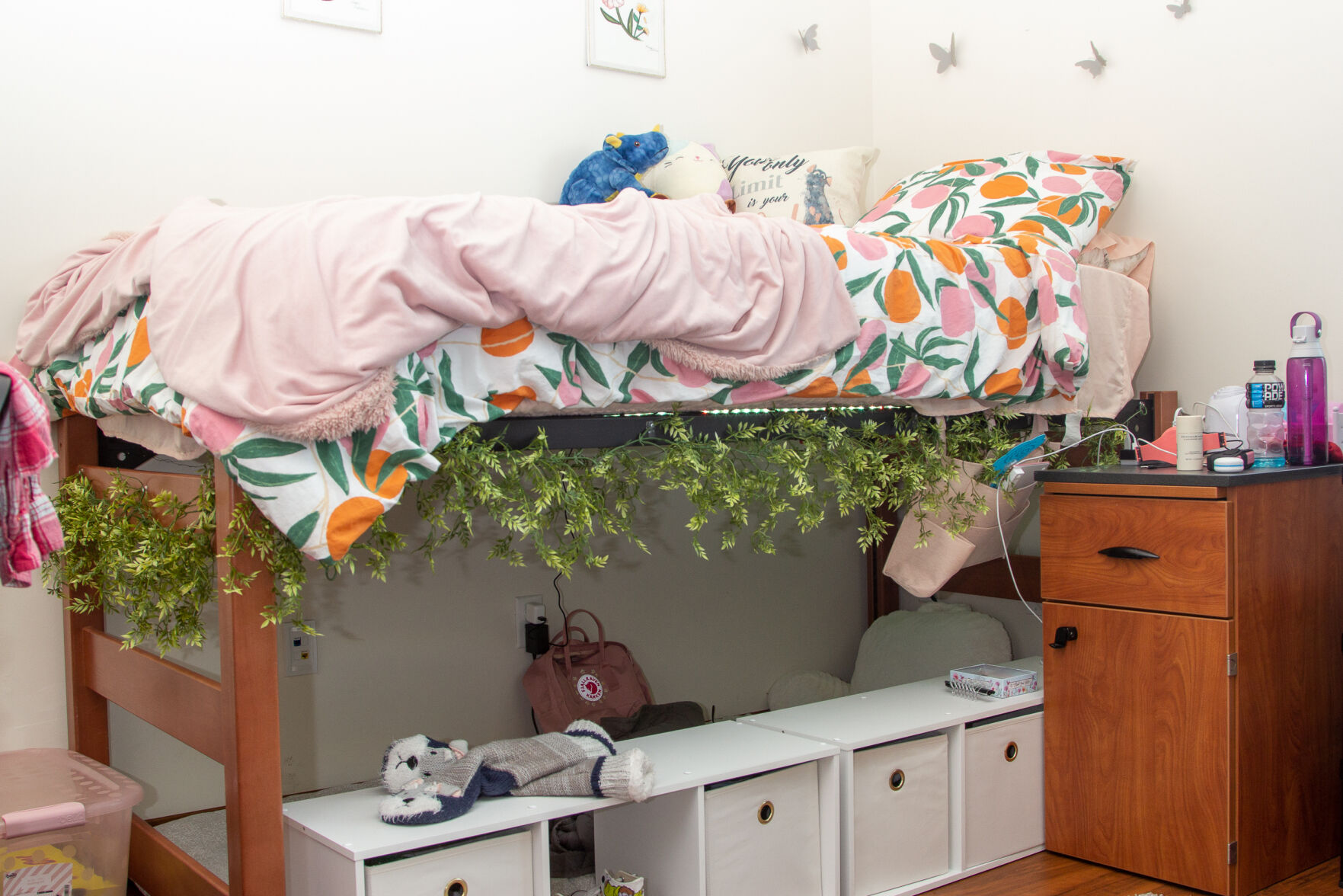 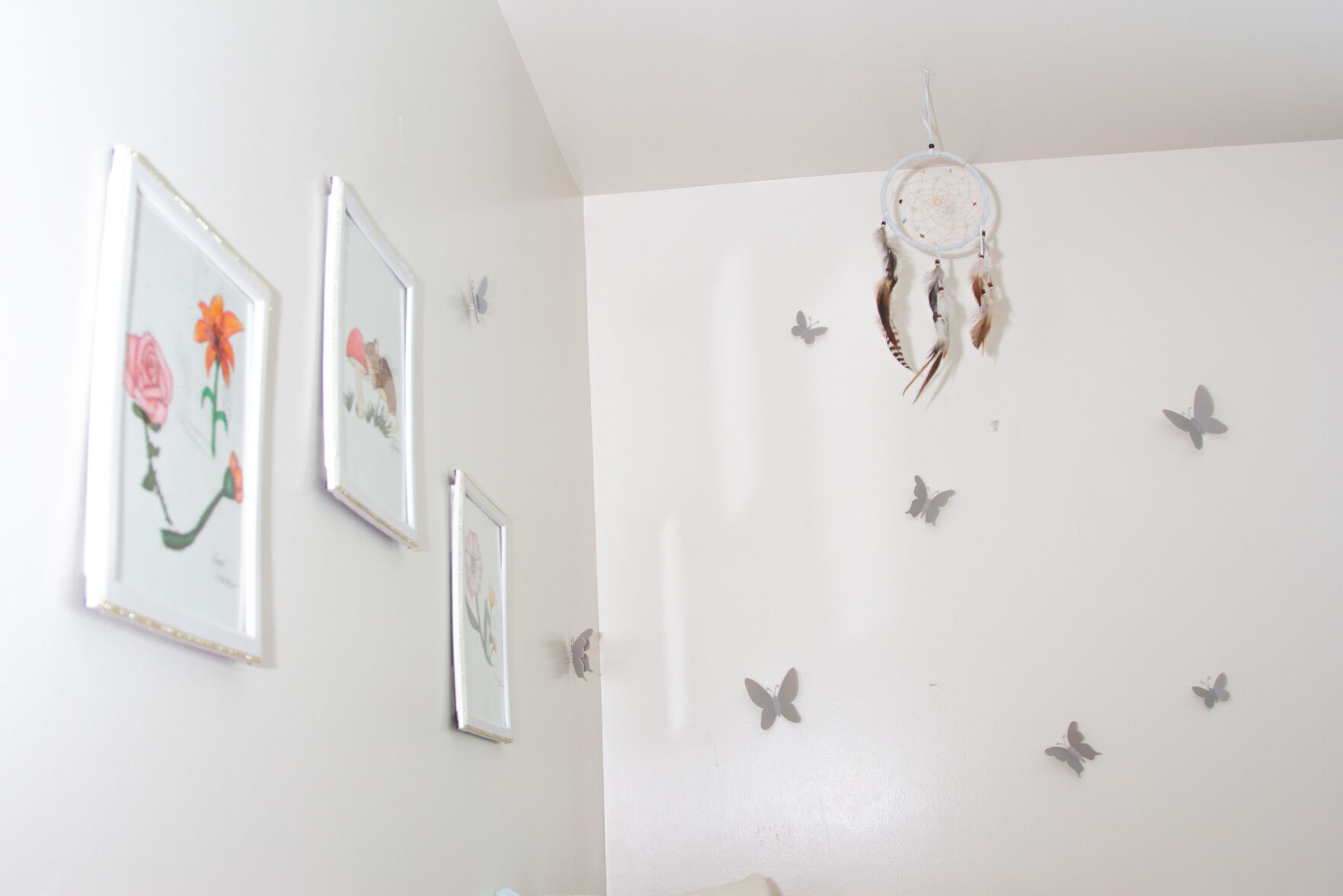 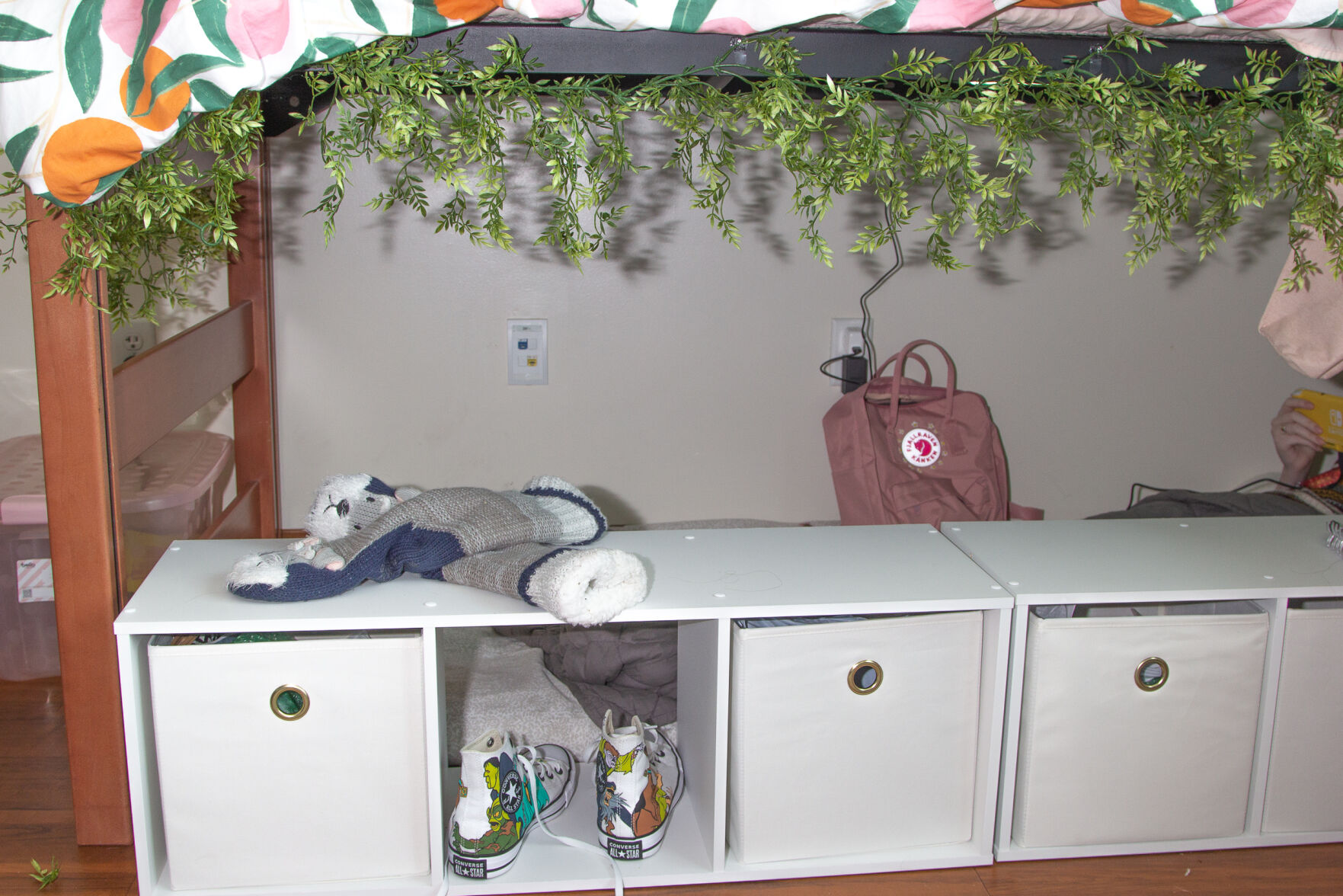 Plastic decorative vines hang from the bottom of BFA performance freshman Emmie Ambrose's bed with cupboards creating a small space under her bed Sept. 3 in Vandergriff Hall. Cottagecore is an aesthetic that uses traditional skills.

Plastic decorative vines hang from the bottom of BFA performance freshman Emmie Ambrose's bed with cupboards creating a small space under her bed Sept. 3 in Vandergriff Hall. Cottagecore is an aesthetic that uses traditional skills.

Cottagecore has recently seen an explosion in popularity on TikTok, but biochemistry freshman Olivia Starks said she first came across the trend on Pinterest almost two years ago.

Cottagecore’s aesthetic reminded her of berries and fairy tales, and she described it as “the type of style you dress up in with nowhere to go.”

When dressing in cottagecore, some common themes are earthy tones, sturdy fabrics and loose-fitting clothing, like what you’d see worn in a cottage or on a farm in past decades.

More modern takes have been made on the trend, keeping the colors but adding things like overalls instead of long skirts and thrifted items.

The style grew on Starks because she likes that it is feminine without relying on typical pink and sparkly girly looks, she said. It’s a stronger, more utilitarian take on femininity.

On her Instagram, Starks can be seen outside in long, vintage florals and accessorized with butterflies, flowers and a ukulele.

There’s generally two halves to cottagecore: the aesthetic — organizing outfits and taking pictures — and the lifestyle, where people commonly make things with their hands and desire to live off the grid.

Right now, Starks falls more in the first half. As a college student, it’s hard to fully achieve the second half, she said, as she lives on campus and doesn’t plan to quit her education for the cottagecore life.

But every time she’s been able to visit more rural areas, she’s enjoyed her time, and she thinks that someday she’d like to invite that kind of change into her life more permanently.

“It really appeals to me more for the type of simplistic lifestyle I want to live, where it’s not hectic and what I’m used to,” Starks said.

When are we starting that wlw cottagecore commune??? ##aesthetic ##cottagecore ##wlw ##TheHighNote ##fyp

Performance freshman Emmie Ambrose speculated that the trend may have recently taken off on TikTok due to the state of the world amid COVID-19. There’s an inherent escapism to watching people live a simple life and not worry about the outside world.

This is a point sociology associate professor David Arditi agrees with, as history has seen examples of people wanting to reconnect with nature, from hippies moving to Appalachia in the 60s to the Amish living off the grid. Cottagecore may be a reflection of this desire to move away from capitalism and things you can’t control, Arditi said.

“We no longer feel like ourselves, so we’re looking for ways to connect back with that humanness,” Arditi said.

It’s that human simplicity that Starks enjoys. Although she can’t drop everything and live in the woods, she does what she can to bring the simple life to her dorm.

She said part of why cottagecore appealed to her was because it reminded her of favorite childhood fairy tales, Snow White and Sleeping Beauty.

The idea of being warmed by a fire or surrounded by chirping birds and deer was her favorite fantasy, and Disney movies were the only place she could go to feel like that, she said.

“So Disney definitely had a big role in me sort of taking this on as something I really want for my life,” Starks said.

Ambrose also grew up in the suburbs but prefers the more country or rural areas. She grew up visiting her grandparents in their home in the countryside, she said, where she had up-close experiences with animals and nature.

“It sounds stupid, but I keep pecans in my backpack just in case I see a squirrel so I could give them a little pecan because that’s what we did at my grandparents’ house,” Ambrose said. “It’s just like, you know, feeling connected with nature.”

To connect to that feeling, Ambrose used cottagecore as part of her dorm decor inspiration this semester as well. From a peach-covered duvet (a soft, feather-filled quilt) to handmade wall hangings featuring “Timothy the dwarf mouse,” Ambrose brought her favorite elements of the trend to her room.

At the same time, she’s taken on baking, another cottagecore element that both she and Starks enjoy. Ambrose said she bakes goods like banana bread as a calming hobby.

♬ Coffee for You Head - Vinyll

She finds her recipes from cookbooks in thrift stores or antique shops as well, so she knows her cupcakes and banana puddings are connected to an older time period.

Wanting to connect to homemade items is a natural part of being human, Arditi said, and sometimes when working in modern-day factories or as “a small part in a big machine,” we’re deprived of that.

All of these elements boil down to enjoying simple things in life — even if they’re quaint or outdated. Many of these elements are simply a new spin on activities that women have traditionally been forced to oversee.

Ambrose said it was the idea of “taking back the power” that initially drew her in and kept her captivated, because an older lifestyle is appealing but women were historically looked down upon as housemaids.

“I just like the idea of taking something that was very traditional and then taking it back in my own kind of way,” she said.

This is why students, especially college students need to study history, to not only obtain valuable knowledge of the mistakes and lessons learned from generations past but to understand and appreciate how we got to where we are now.

This article while informative on the Cottagecore craze that is now picking up more momentum, also misrepresents the origins for which cottagecore gets it's supposed inspiration. Let's take a look shall we!

First: The author lauds the claim that "It’s a stronger, more utilitarian take on femininity." However this style has been used by women with multiple variations, long before this century and by women of many different backgrounds and cultures. Western civilization, despite the dogma of radical feminists, has always valued women as an essential part of their society. History has numbers of instances of women serving a purpose that was indispensable at that particular moment that changed history forever. Feminism has redefined what "Strength" means for women and in a bad way. They belittle and scoff at the idea of femininity, they berate you for not wanting a horrible office job instead of a family, and they sew more division, hate, and mistrust of the genders.

Third: Cottagecore is not a referendum on Capitalism, it is a reminiscence of a past style of life that can improve ones own life. Cottagecore is instead a rebuke to the empty lifestyle offered by industrialization combined with radical liberalism. While escapism is a large aspect what are we escaping from? Look around at the world and it's no surprise. Rapid polarization engulfing the country, the establishment pushing racial division by pandering to identity politics and tribalism, and the exploitation of the poor and middle class by the political elite and the mega tech cooperations that fund, socialist, economy killing policies. Combine that with tyrannical authoritarian leaders like the governors of New York and California who think themselves dictators and there is a lot to want to escape from. Cottagecore focuses on empowering the individual to see what skills they can pick up and what they can do to improve their own lives. A lot like capitalism now that i think about it, create something yourself, others start to like it and you start to profit from the idea/ creation.

Finally: To embrace the past does not mean that you are working to restore the fictitious patriarchy that third wave feminists have created to serve as a boogieman. Did our society have to make some changes to ensure equal and fair treatment under the law? Of course, and we achieved that but now have we gone to far? Natural gender roles have existed since humanity began forming societies. To deny what comes naturally to you is to deny your own humanity. Men and women are NOT the same which is wonderful! Most men love it in a woman to see them act a little more feminine, its a type of beauty that is instinctual. Our history reminds us that if you work hard, create something for yourself, and follow your instincts you'll be rewarded. This has always applied to both genders, only now in recent decades have women been shamed for doing what might come naturally to them. In every age in our history men and women have worked together to better their society, only now do we see men and women working against each other to rip apart one of the greatest civilizations to exist in human history.

Only we can stop the decline of our country and it starts by standing up to the institutions that work to destroy our history, relationships, culture, and rights. It starts when you walk away from liberalism and embrace conservatism. Conserve what is ours by inheritance, conserve our way of life.