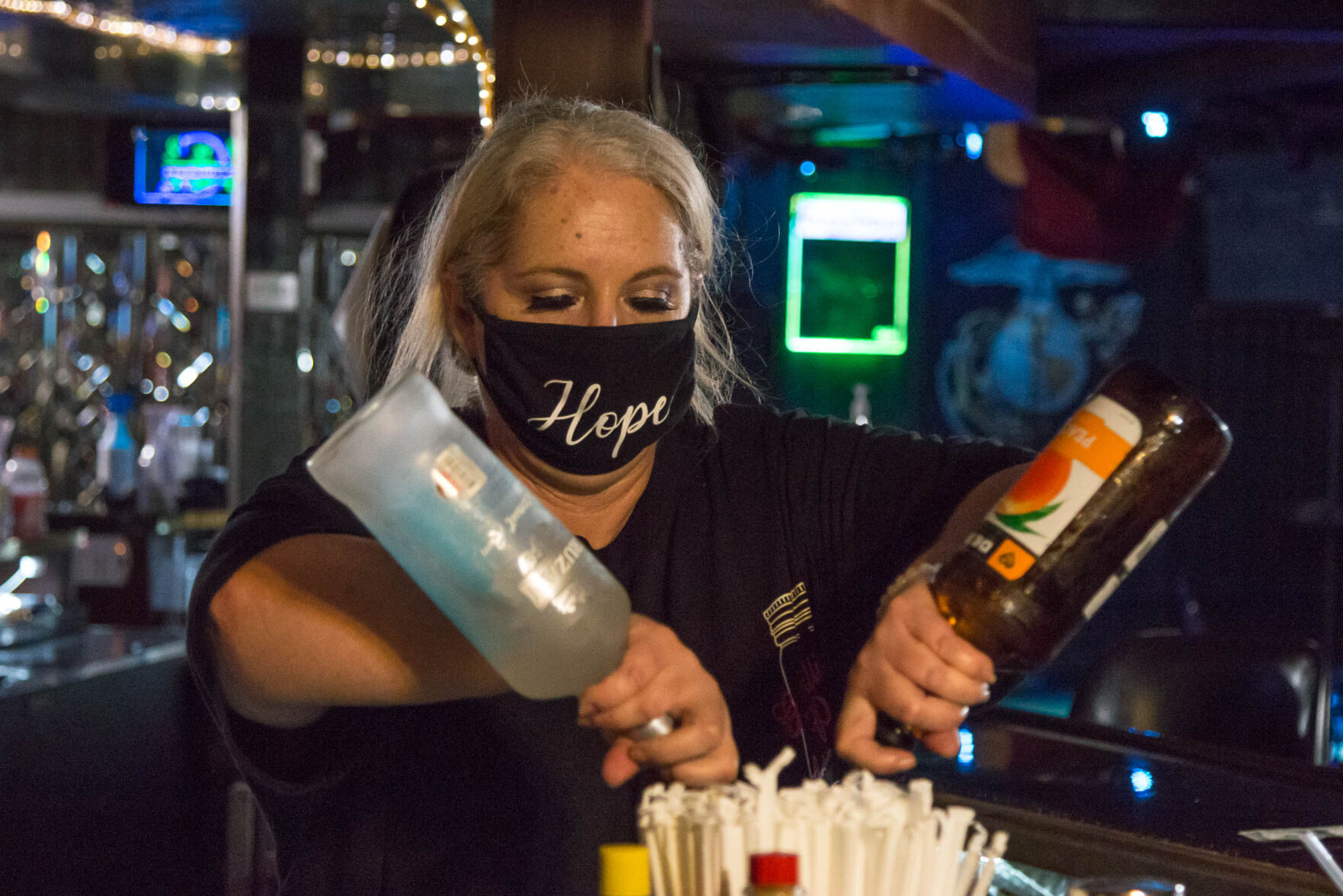 Sonia Fennel, G Willickers Pub manager, prepares drinks at the bar during a protest against bar closures July 25 in Arlington. The bar is one of hundreds across the state participating in the protest. 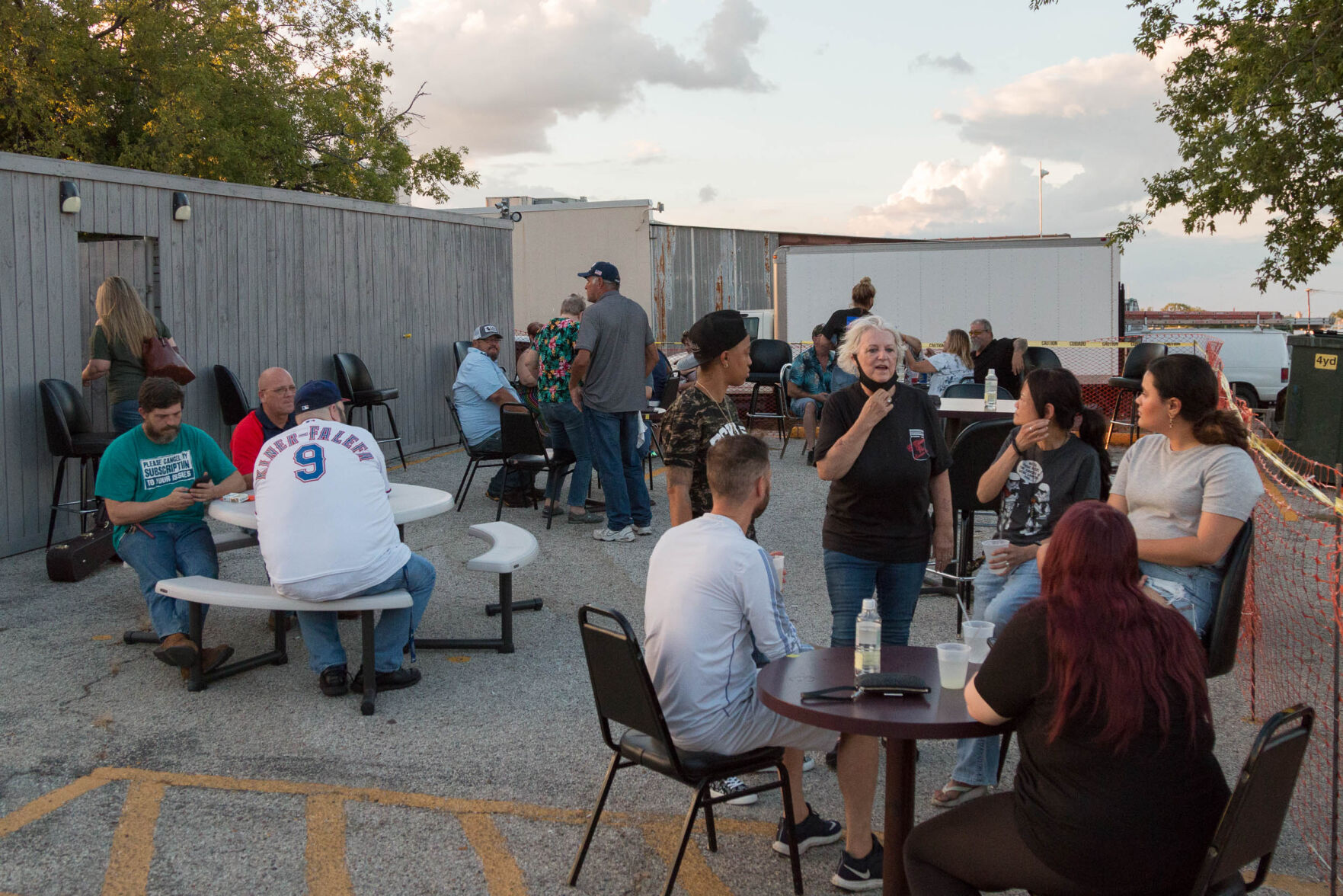 Customers sit outside in a temporary seating area during a protest against bar closures at G Willickers Pub on July 25 in Arlington. The outdoor area was fenced off to make sure guests could only enter through the front door. 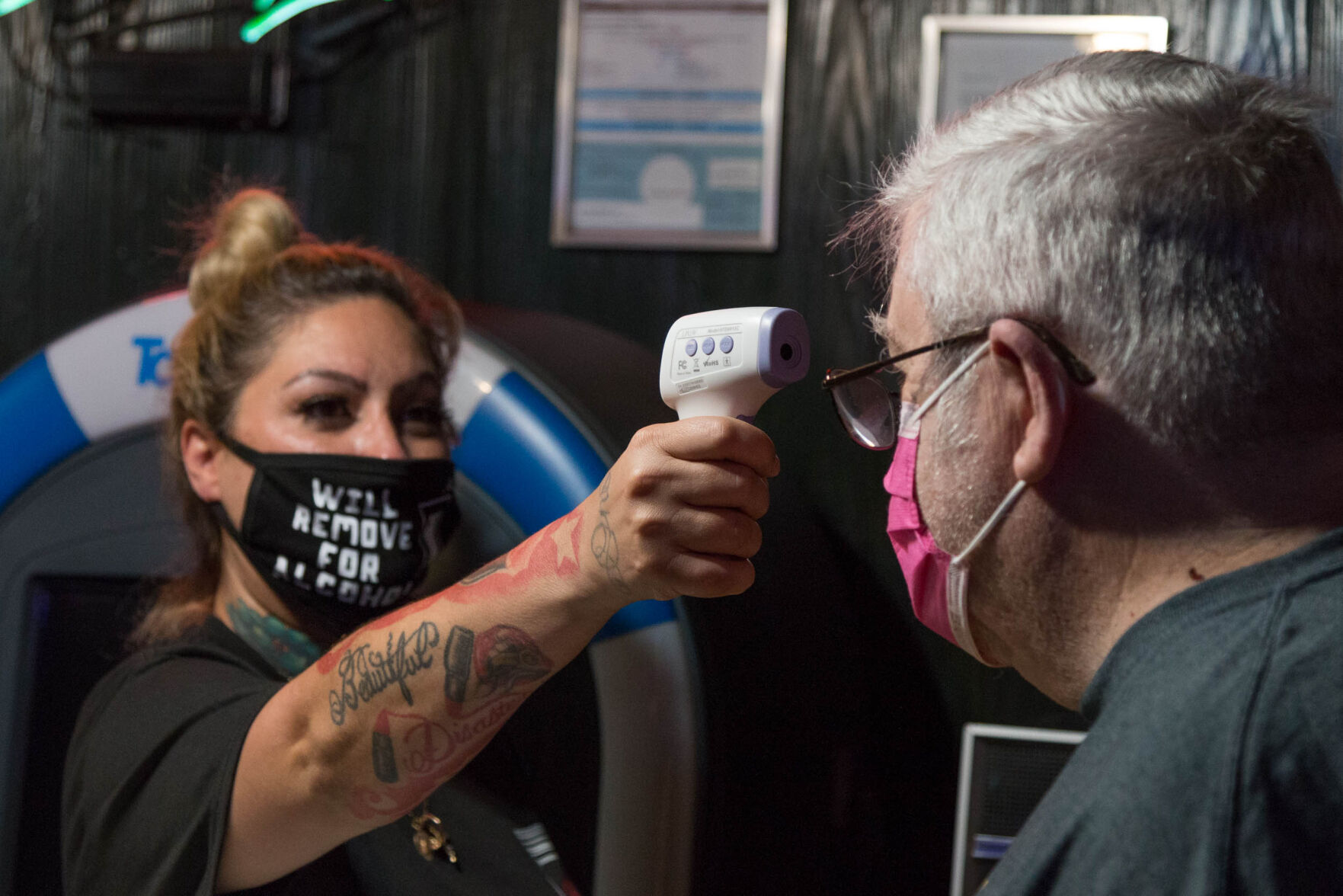 Ashley Eastwood, G Willickers Pub volunteer, uses a non-contact infrared thermometer to check a patron's temperature at the door during a protest against bar closures July 25 in Arlington. Because of the heat outdoors, many guests had to cool off before their temperature read below 100 degrees. 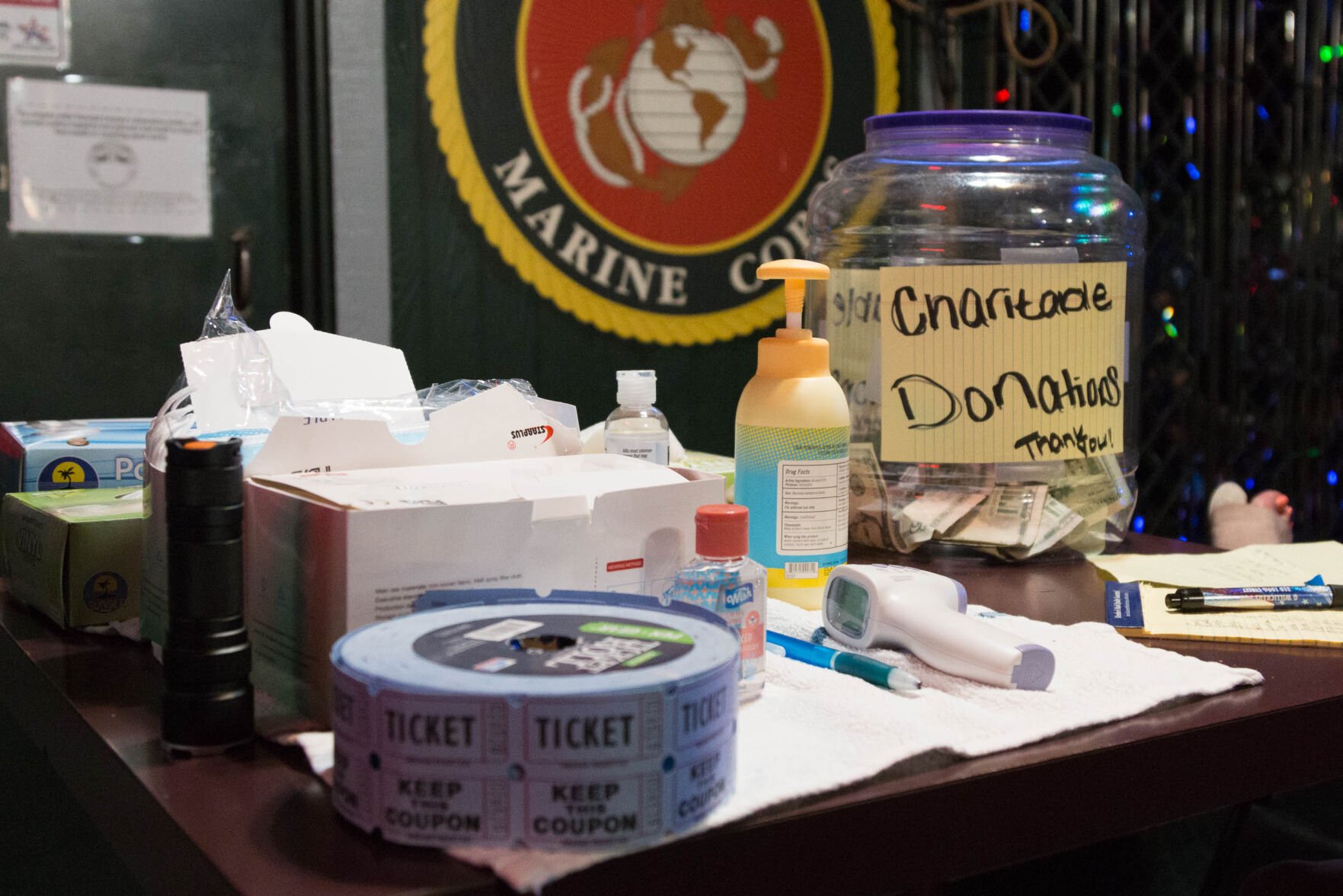 The staff at G Willickers Pub offers masks and hand sanitizer at the door during a protest against bar closures July 25 in Arlington. Patrons had to have a temperature below 100 degrees in order to enter the bar.

Bud Light in hand, Arlington resident Tricia Jones stopped in the back doorway of G Willickers Pub to survey the patio. After scanning the bar for friends and acquaintances, she stepped forward onto the patio, swaying her hips to the reggaeton music playing in the background. She paused at the first table to slap another bar-goer on the back and share a joke. Laughing, she turned to wave at another table of guests before making her way back to her table, where three of her friends sat waiting.

Jones was a “beer type of gal,” and so were most of the others with her. Her bottle of Bud Light, a few Miller Lites and a pack of cigarettes littered the table. After sitting, she downed a swig of her drink and continued swapping jokes and personal jibes with the three other women.

Jones is a long-time patron of the Arlington dive bar, and that Saturday night was one of many she’d spent there. If you didn’t know any better, you’d think this evening was like any other. It was after 5 p.m. at a bar on the weekend.

To the left, a group of 30 or 40-somethings deep in conversation huddled around a table of mixed drinks. To the right, a man and woman chatted over a pair of beers. It was unclear if they came together or met at the bar.

A string of yellow lights along the patio’s fence flickered on and off. “God Bless America” and “Home of the Brave” signs lined the walls.

Beyond the patio, eight more tables stood scattered in the parking lot under the setting sun. About 50 patrons sat in groups of two to six enjoying cold drinks after a long day of 90-degree weather.

You wouldn’t know that the scene was part of a statewide protest unless someone told you.

On June 26, Gov. Greg Abbott issued a statewide order to shut down bars once again in an effort to further contain the spread of COVID-19 in Texas. Almost a month later, hundreds of bars across Texas opened Saturday night in protest of the shutdown.

Sonia Fennel, G Willickers Pub manager, said the bar has been open for 30 years but spent four and a half months of this year closed. Not anymore, though.

She said she joined the protest, named Freedom Fest, to demonstrate that bars can operate safely amid the pandemic.

At the time of publication, Tarrant County has reported over 25,000 confirmed cases and 348 deaths. Arlington has reported 4,925 cases with 56 deaths.

To combat the virus and ensure the safety of her patrons, Fennel established several safety measures throughout the venue. Tables were spaced six feet apart, a bottle of hand sanitizer was stationed at each table and guests were required to wear a face mask while inside the building, which was limited to a 25% capacity of 19.5 people. The patio, however, wasn’t limited.

Volunteer Ashley Eastwood, who works at a bar in Dallas, and bartender Chris Clemons monitored the only entrance to the building, taking temperatures as people entered and giving everyone a squirt of hand sanitizer. Anyone with a temperature of over 100 degrees would be turned away, Fennel said.

The new measures were met with mixed reactions from patrons. Many leaned forward to the outstretched contactless thermometer without much of a comment, but other longtime patrons exchanged some sass with Clemons and Eastwood and questioned if it was “really necessary.”

Their sass was met with strict pushback from Fennel, though. She was willing to protest the governor, but she wasn’t willing to risk that her guests spread the virus, she said.

Both the Texas Alcoholic Beverage Commission and the fire marshall visited the bar before its reopening, and Fennel said the bar will end up with a 30-day suspension. That won’t stop her.

Fennel’s sparkly red, white and blue baseball cap carried a special significance that night, she said. It honored America and the fifth amendment, which she said was violated when her bar was forced to close. The Fifth Amendment states that no person shall be “deprived of life, liberty, or property, without due process of law.”

G Willickers Pub has been her life for the last 21 years, she said. Since the shutdown, she’s been unable to qualify for unemployment benefits and has gone through her savings and credit cards to support herself financially.

Clemons said she has worked at the pub for two years, and it was her only source of income. Like Fennel, she also hasn’t qualified for unemployment benefits, and she had to borrow money from her family and sell her unnecessary belongings.

Struggling to make ends meet is a common theme now among bartenders, Clemons said. But Saturday night was about much more than finally making a paycheck.

For Jones and her friend, Euless resident Sheila Frank, the night was about socializing. And a few drinks, of course.

Frank has been a customer at the pub since 2006 and would frequent the pub four or five nights per week before the shutdown. It’s a pastime she said she’s missed.

The bar environment isn’t one that you can replicate at home, she said. Although Abbott allowed bars and restaurants to deliver alcoholic beverages with food purchases, it simply wasn’t the same experience.

“I don't drink at home, it’s boring,” she said. “I don’t sit at home and drink. I go out to be social and hang with my friends and have a nice evening out.”

It seemed like others came out that night for similar reasons. Most patrons kept outside on the patio or in the parking lot, laughing, joking and drinking. Before long, a few guests were taking body shots, and one woman may have lost her shirt for a moment. It wasn’t something that many people will find at home in their living room on a Saturday night.

Both Jones and Frank were well acquainted with many of the night’s customers. They were like family, Jones said.

Clemons said it’s that friendly, welcoming environment that keeps bringing back many of the clientele.

She wishes the bar could permanently open again to that “family.”

Both Eastwood and Clemons said they’re frustrated at what they see as a double standard. While bars are forced to stay closed, restaurants with bars remain open — with far fewer precautions in place. If you go to places like Walmart or Applebee's, you’re unlikely to see anyone at the door taking temperatures or offering hand sanitizer, Clemons said.

“We’re taking more precautions than they are, but we’re the ones that get shut down,” Eastwood said.

Not everyone agrees that bars should open, though. Fennel said she’s received numerous death threats from strangers via social media and text messages. As an additional safety measure, she hired two professional bodyguards for the night.

Despite the death threats and the threat of COVID-19, she’s not fearful. In addition to the new safety measures, she’s relying on faith.

Before opening, Fennel and her staff of six for the night prayed together by the bar’s entrance. After that, she focused on keeping her guests both safe and happy.

Pandemic or not, Fennel said the bar will continue to open every Saturday until Gov. Abbott talks directly to bar owners and listens to their perspectives. Bars can operate safely and responsibly, Fennel said.

Protesters sing and march through Arlington for racial justice

Activist group We Take The Streets has protested police brutality and racial injustice for the last 62 days.