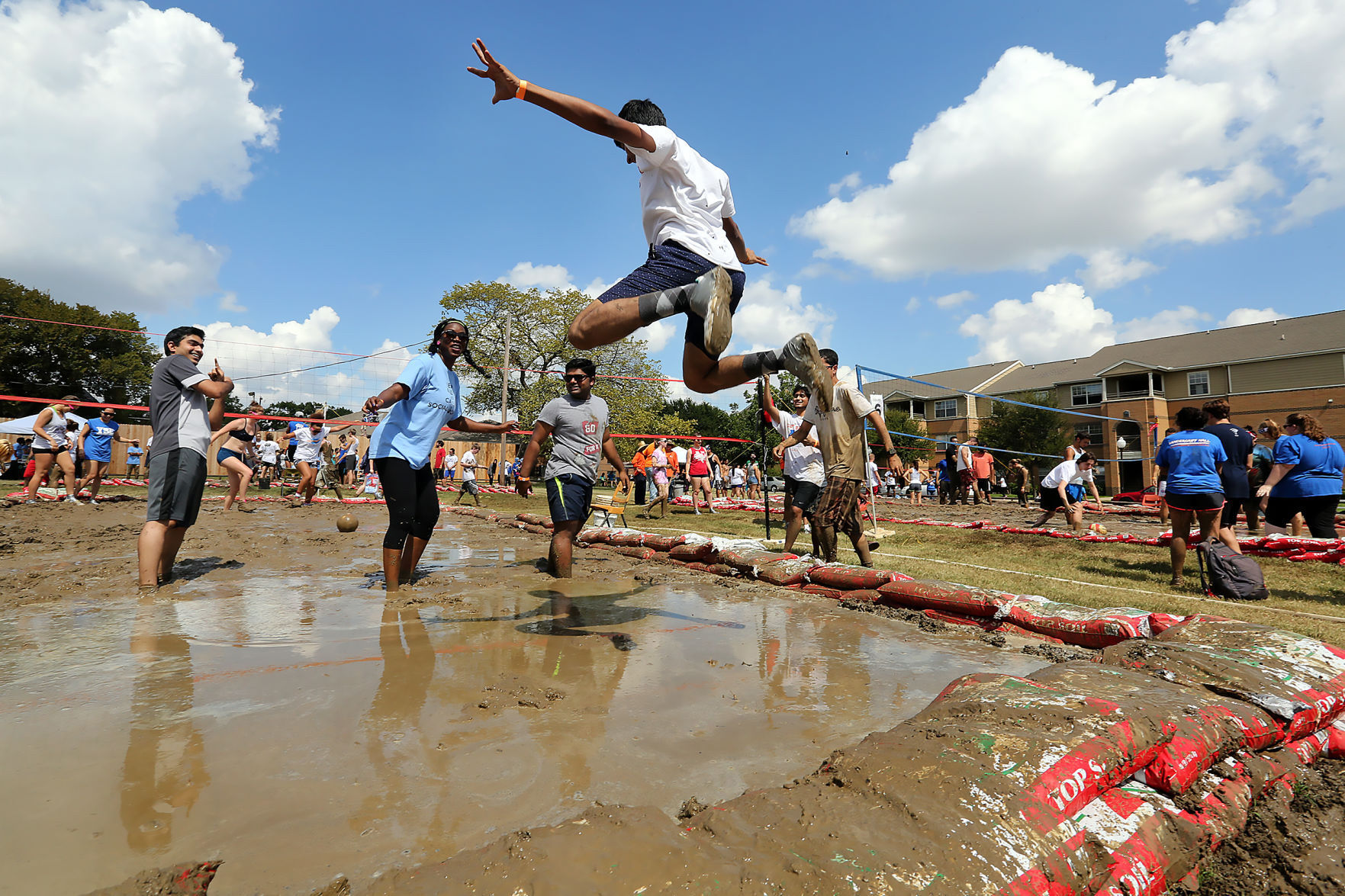 A student leaps into the air to splash his friends Sept. 23, 2016, at the Oozeball courts on the corner of Summit Avenue and Greek Row Drive. Students played Oozeball, a version of volleyball played in several inches of mud. 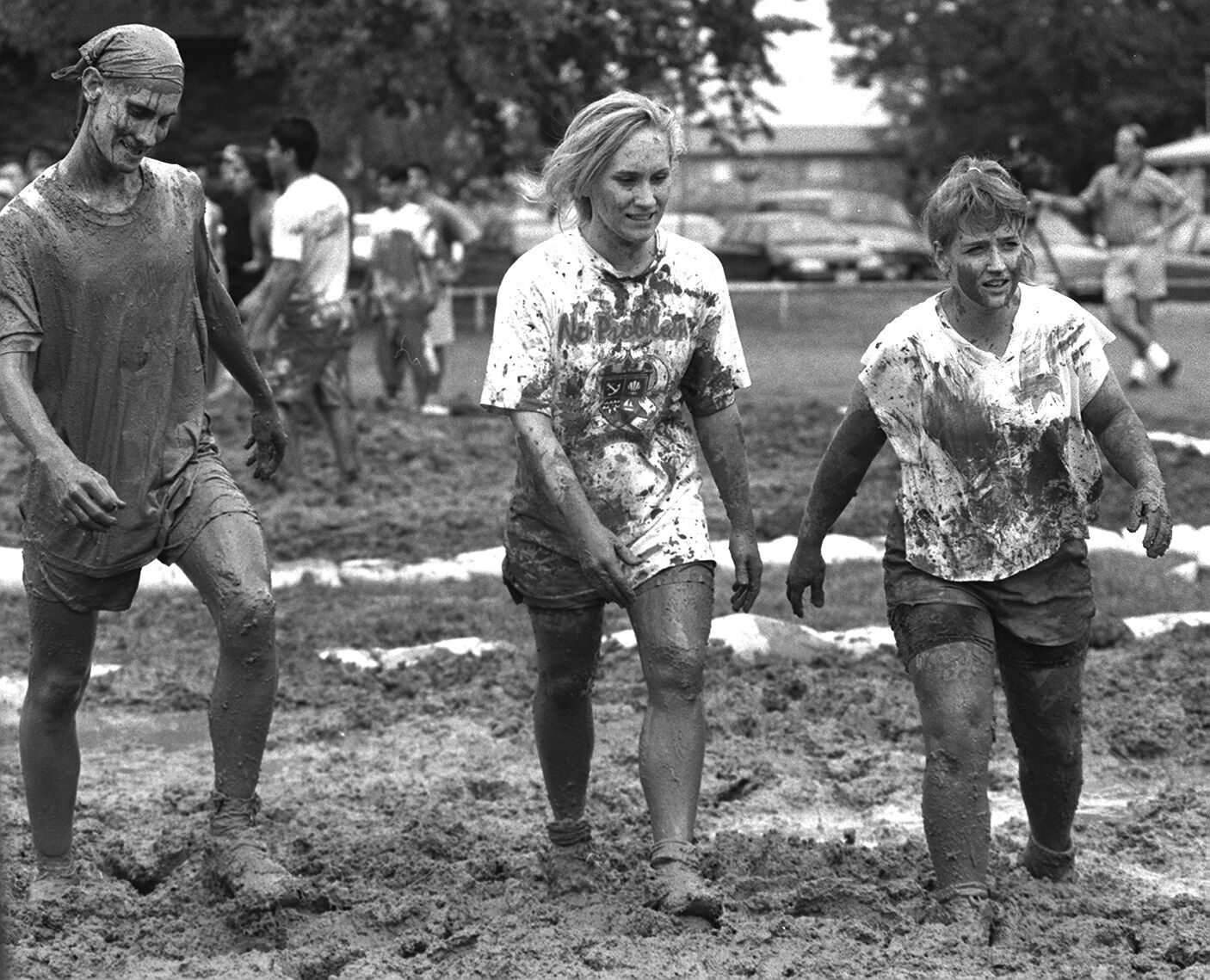 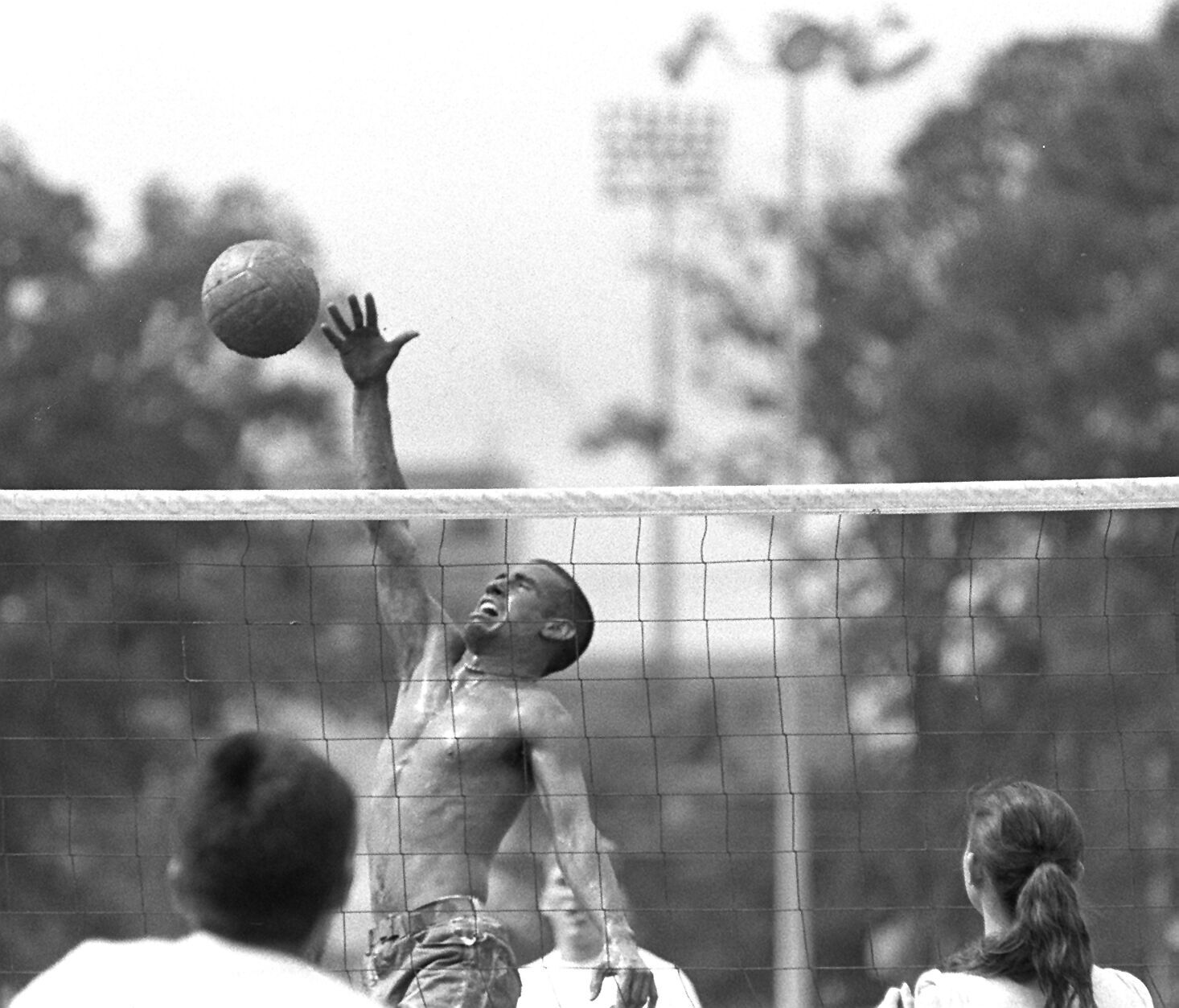 A student leaps into the air to splash his friends Sept. 23, 2016, at the Oozeball courts on the corner of Summit Avenue and Greek Row Drive. Students played Oozeball, a version of volleyball played in several inches of mud.

As late September turns into October during a semester characterized by social distancing protocols and virtual spaces, many traditions have been all but abandoned, at least for the time being.

At the corner of Summit Avenue and West Fourth Street, just behind the former Pi Kappa Alpha fraternity house, an empty patch of land serves as the location for Oozeball, the university’s annual mud volleyball tournament event.

The grassy area of land has 10 large and distinct empty pits that make up each court. Every fall, groundskeepers border the courts with bags of topsoil, fill them with a truckload of dirt and hose them down for hours until the dirt is soft and muddy.

But this year, that chunk of land will remain dry and empty, bringing more than 30 years of tradition to a halt.

The tournament started in 1989 with only one court and four teams. It has grown to feature about 100 teams with six students each, all coming together for an afternoon of slipping and falling in the mud while attempting to get a muddy volleyball over the net, beat other teams and win the tournament.

Alongside the game itself, the music, laughter and groundskeepers hosing down the mud, players and bystanders create an environment that has led to Oozeball being one of the most cherished UTA traditions.

But amid a pandemic, a crowd of several hundred people crammed together and rolling around in mud likely isn’t approved by the Centers for Disease Control and Prevention, so the event will not be held this year.

Without it, the university loses a fundraising opportunity. The registration fee and money raised by event sponsors goes to the Division of Student Affairs’ Emergency Assistance Fund.

The fund has seen a surge of usage because of the financial hardships students have experienced due to the COVID-19 pandemic, with hundreds of thousands of dollars needed to fully grant funding requests.

Money aside, many students will miss the opportunity to experience this one-of-a-kind tradition.

For the last two years, biology alumnus Garrett Davidson would watch the event from a bird’s eye view.

Davidson participated in Oozeball his freshman year, but during his junior and senior year, as a member of Pi Kappa Alpha, he and one of his fraternity brothers decided to climb up on the Pi Kappa Alpha house roof and get a complete view of all the matches.

“Being on the roof was so much cooler because we were able to see all the games that were going on,” he said. “We would all be joking around and saying, ‘Oh I think this team is gonna go all the way.’”

Oozeball was not only an opportunity to spectate or participate in a unique competition, but also a way to meet new students and make new connections, said Drew Barfield, Campus Recreation assistant director.

“We have students from different backgrounds come out and play and by the end of the tournament, everyone is just covered in mud and having [a] great time,” he said through email. “It’s such a positive event and a great way to begin the school year.”

Davidson said Oozeball was an ideal opportunity to build friendships, even if someone joins a team of people they’ve never met before.

“Especially your freshman and sophomore years, when you’re meeting people that you’re most likely going to be hanging out with for the rest of your college experience,” he said. “I know a lot of people that have gone to Oozeball and joined a random team and then became friends with those people just because they were put on that team.”

Baker said that Campus Recreation, which hosts the event, is hoping to have it in the spring, but that could be difficult to pull off. He said they need to wait until after spring break to get the right kind of weather but can’t do it too late in the semester because students will be focused on finals and graduation.

Not having Oozeball this semester also means that students who are set to graduate won’t be able to attend the event for a final time.

Accounting graduate student Jeffrey Esakov said he never got a chance to play Oozeball, and now he is disappointed that he won’t have the option to try it in his last school year.

“I always had to work,” he said. “I had a bunch of friends that have done it, I knew what it was. I just never got around to being able to do it.”

Esakov said he hopes that by next semester he’ll be able to participate in UTA’s Bed Races, another long-standing tradition typically held in March.

Davidson said when Oozeball comes back, everyone should take the opportunity to play it at least once.

“Coming from a person who has graduated, you only get four chances,” he said. “It only comes around four times, so do it when you can.”