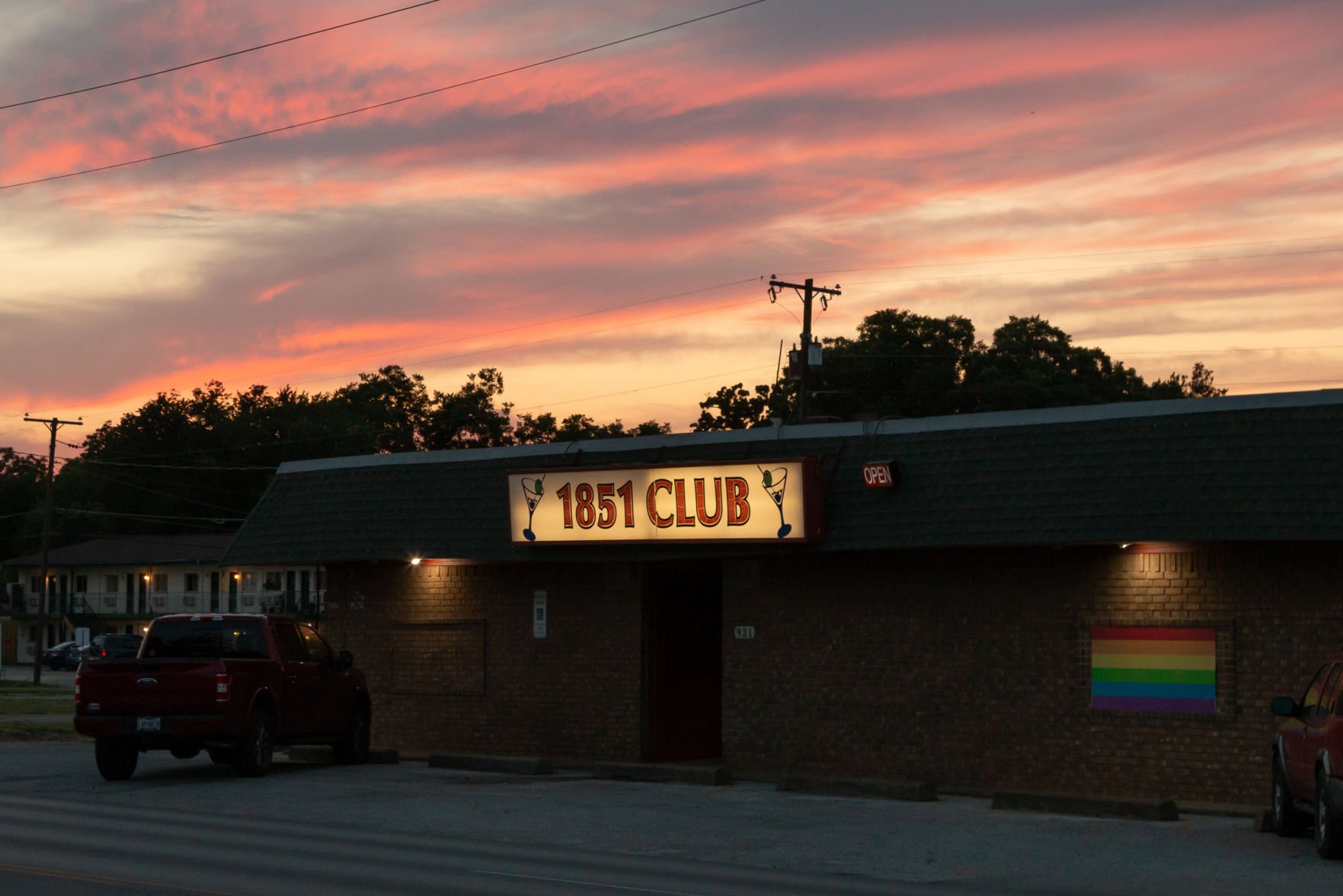 1851 Club Arlington sits underneath a sunset June 12 in Arlington. The club hosts all-star drag shows on Friday and Saturday evenings. 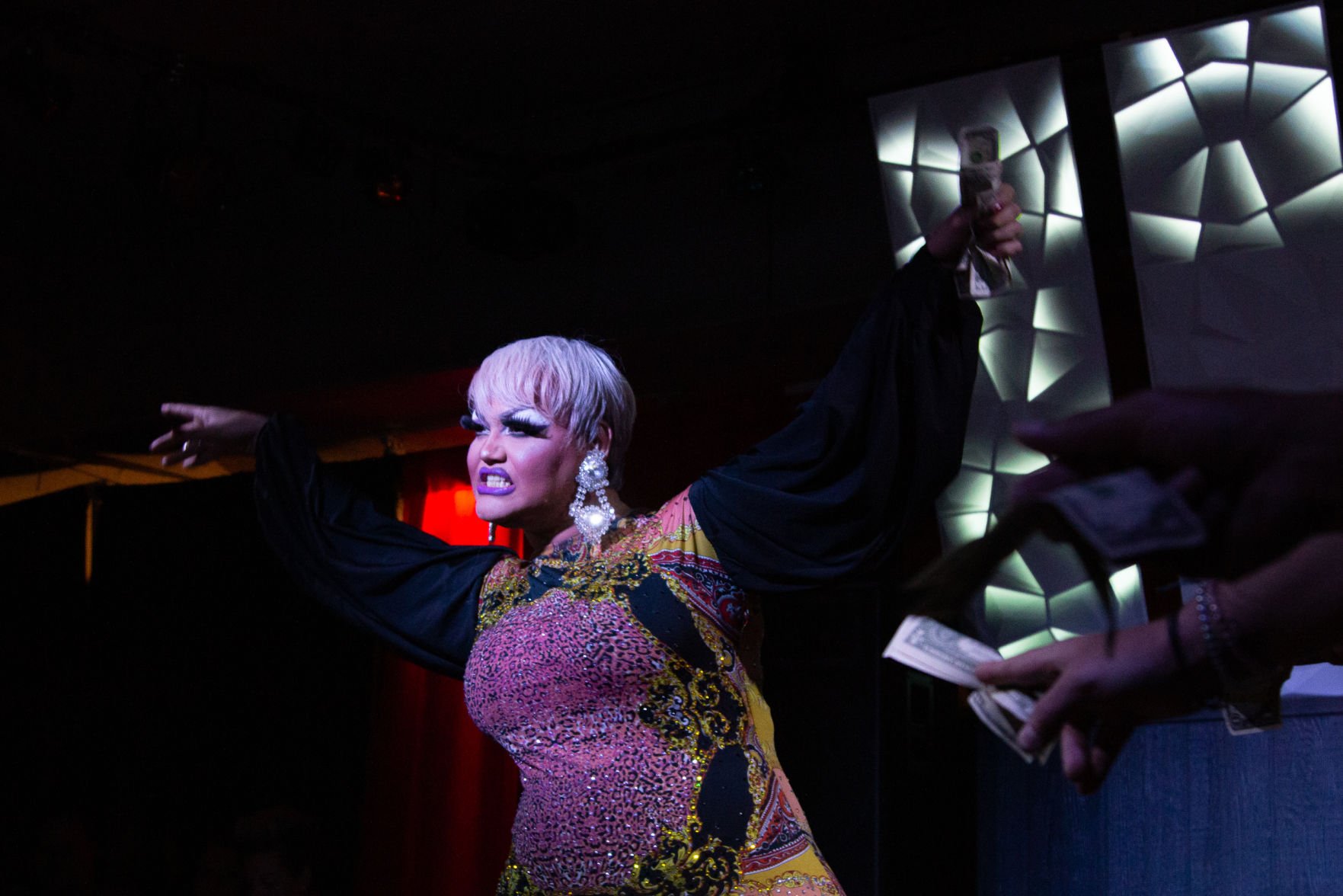 Kiana Lee hosts the All Star Drag Show on June 12 at 1851 Club Arlington. Lee is one of four drag queens who performed to multiple songs throughout the show. 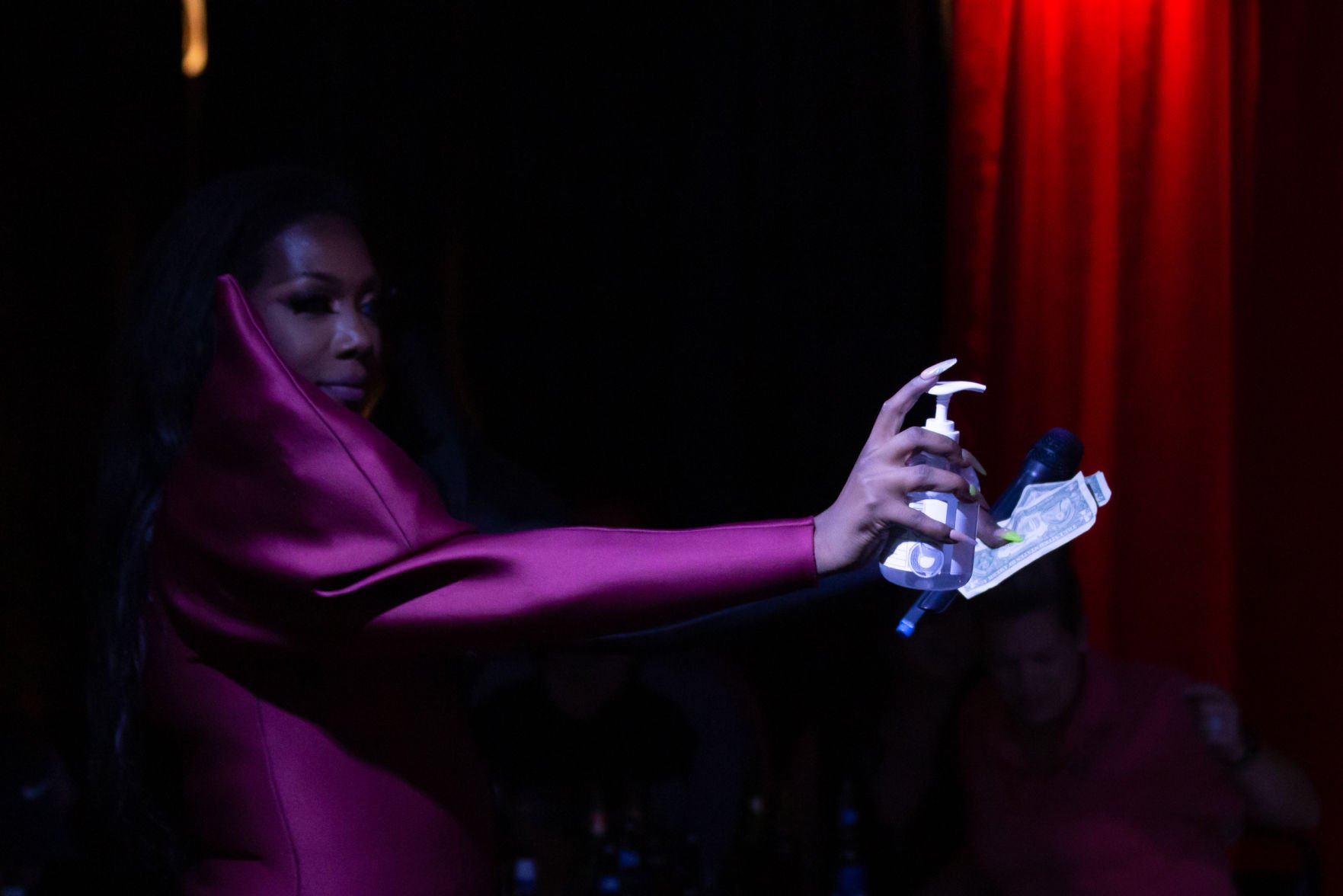 Sapphire Davenport offers hand sanitizer to performers during the All Star Drag Show on June 12 at 1851 Club Arlington. Davenport said she has performed drag at 1851 for six years. 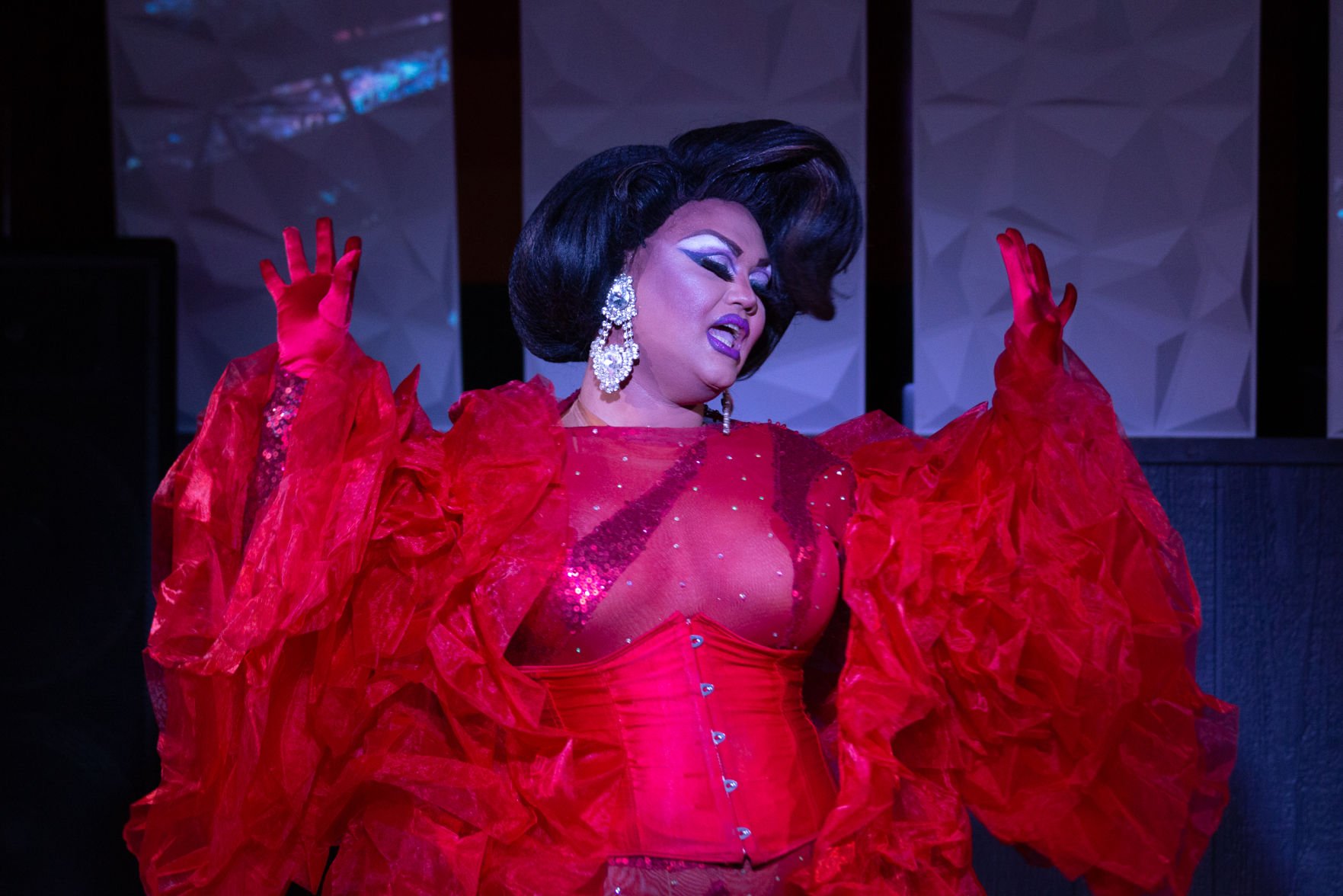 Kiana Lee performs during the All Star Drag Show on June 12 at 1851 Club Arlington. Lee was named Miss Gay Arlington America in 2019 and Miss Gay Fort Worth in 2018.

Hours before the show was set to begin, soft blue LED lights were set up next to the small dance floor. The staff had cleaned and prepped the bar top, and older patrons were finishing their last happy hour drinks and trickling out of the bar.

Drag shows are a Friday and Saturday night staple for 1851, and this was only the second weekend of shows since the COVID-19 pandemic hit North Texas.

Social distancing and 50% occupancy signs were set up both outside and inside the bar, and the tables surrounding the dancefloor were spaced out about 6 feet. The staff was prepared for a fun night and the responsibility of keeping guests safe.

But perhaps the show that night wasn’t the most consequential thing to happen at 1851.

David Farber and Darrel Jackson had just gotten married and were at the bar with a small group of friends. Because of COVID-19, they had their wedding over Facebook Live. After the ceremony, their small group decided that 1851 would be just the right place to celebrate.

The men and their friends sat on the back patio with nearly-empty drinks in hand. The group discussed a variety of topics, like the consistent tardiness of drag show start times and the merits of Farber and Jackson keeping their own last names. The group also told plenty of jokes that were truly funny but can’t be repeated.

1851 Club Arlington, which reopened under social distancing rules on June 1, is the only gay bar in the city and a sanctuary and entertainment staple for the local LGBTQ community, including the newlyweds Farber and Jackson.

With several owner, location and name changes over the course of its long history, the exact origins of 1851 Club Arlington are a bit murky.

Even employees and patrons who have called 1851 home for nearly 20 years can’t quite pin it down. They just remember the bar being there for them, often for the earliest periods of their personal sexual freedom.

General manager Heather Lynd said 1851 is about 40 years old, making it one of the oldest gay bars in Tarrant County.

She said 1851 has managed to stay running in Arlington for so long because it’s an “everybody bar.” While other gay bars entered the Arlington area and became specialized for gay or lesbian members, 1851 has always welcomed a diversity of patrons.

1851 doesn’t try to compete with the surrounding queer scenes in the Metroplex but rather aims to contribute a space for people to feel comfortable in.

“It’s like a ‘Cheers,’” Lynd said. “We just happen to be a neighborhood bar that happens to be gay.”

Aside from the few Pride colors and the evening preparations for the Friday night drag show, 1851 resembles the typical dive-bar aesthetic.

Upon entering the bar, there are two pool tables and a dartboard immediately to your left. To your right, you’ll see both small and large tables and mosaics of Cher, Marilyn Monroe, Madonna and more hanging from the wall. The dance floor is no bigger than a king-sized bed and located at the center of the tables.

In the back is the bar, with over 40 large bottles of liquor on the display directly below a large, laser cut steel sign that bears the establishment’s name illuminated by soft blue lights.

An analog TV at the top of the bar cycles between showing daily drink specials and the names and photos of the staff, from the managers, to the bartenders, to the DJs and even the security guard.

The look is slightly modern, slightly old-school — a look that reflects patrons of various ages.

Lynd said the bar attracts a younger crowd that shows up more on weekends and late nights but also has regulars from as far back as the 1980s.

Farber is one of those longtime patrons and said that he and his friends frequent the bar.

“We’re all consistent,” he said. “We’ve been here so much, we show up at the door [and] by the time you get to the bartender, your drink is already fixed.”

Even though Farber and Jackson’s marriage celebration may have been the most significant part of the day, the scheduled main event wasn’t lacking either.

The show was scheduled for 10:30 p.m., but typical of the consistent tardiness of drag show start times, the drag show host, Kiana Lee, didn’t come out until a bit after 11.

As the guests moved from the bar top and the pool tables to the tables around the small dance floor, Lee welcomed every group at the bar and personally introduced herself to every newcomer, something Lynd said she does every show.

What followed was two hours of pure entertainment, with the four drag queens showcasing an array of songs, outfits, dance moves and even some underrated comedic chops.

Ricky Lujan, who was at the bar for Faber and Jackson’s celebration, said that even though he hasn’t attended many drag shows in general, some of the queens at 1851 surpass others from more prominent scenes in the Metroplex.

“I’ve seen better shows here than in Dallas and Fort Worth,” he said. “The girls here, they do the splits, they do everything here.”

Cast member Sapphire Davenport said she’s been performing drag at 1851 for six years and loves the unity within the entire cast.

“We’re actually a family here,” she said. “The only thing I don’t like here is we don’t all get to perform enough together because there’s so many of us.”

Because of social distancing rules, people couldn’t take over the dance floor and dance together when the show was over, so the bar started to slowly clear out as it reached 2 a.m.

Although the night was basically over, there seemed to be a sense among patrons and staff that there was at least the Saturday night show to look forward to. And the next shows after that.

Lynd said that’s something that she takes pride in — that the bar has built a sense of community that puts people together in one place and makes them happy.

Over the years, she’s had numerous customers leave notes thanking the staff for making them feel accepted, telling them they’ve been having a hard time or had been contemplating suicide, but they found comfort in that space.

She said she’s glad she can provide a haven and that younger members of the LGBTQ community can see older members and know they’ll be alright.

“It’s neat that they see the older gays and lesbians and trans. You know, people that they can look up to and see that it’s okay. And we’re cool,” Lynd said. “We’re just us, and that’s good enough.”

G Willickers Pub reopened with hundreds of other bars as part of Freedom Fest, a statewide protest against Gov. Abbott’s shutdown orders.