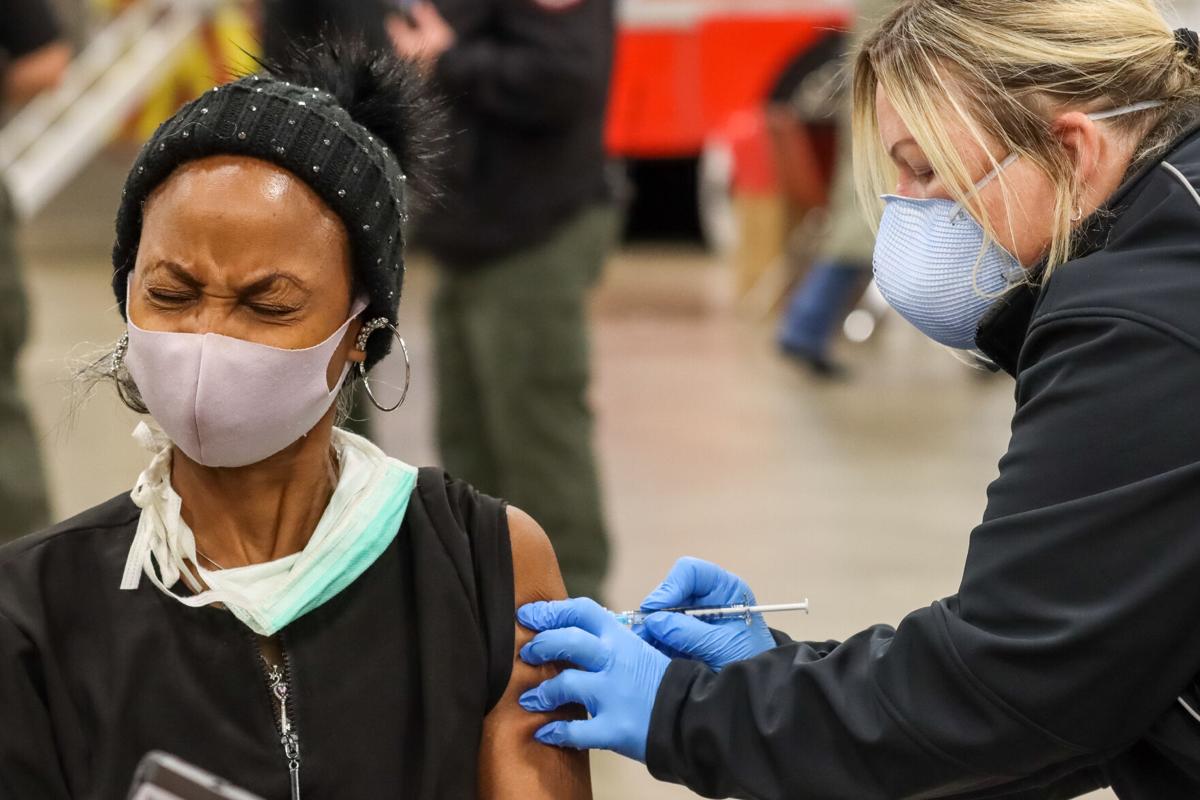 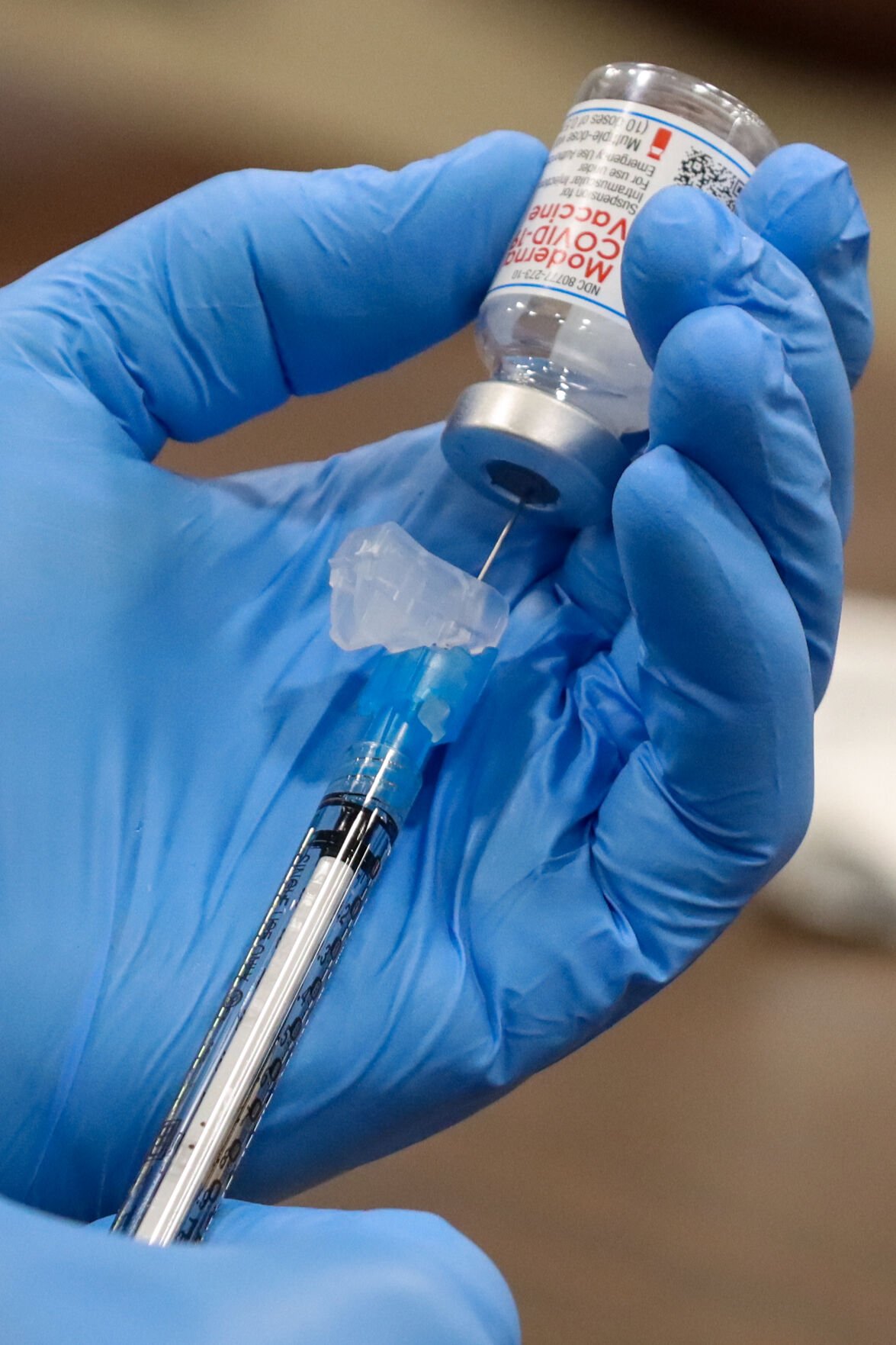 A member of the Arlington Fire Department fills a syringe with a dose of the Moderna COVID-19 vaccine during a distribution Dec. 31 at Esports Stadium Arlington and Expo Center. About 300 people were administered the vaccine. 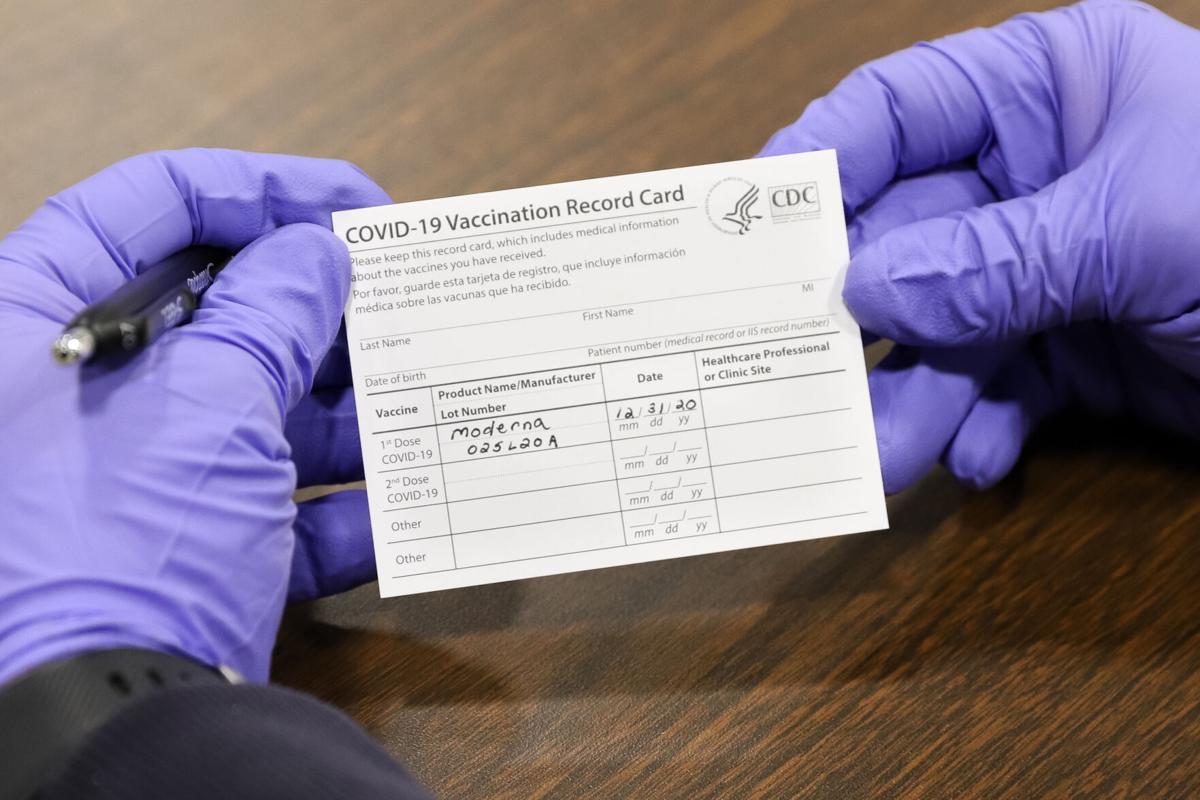 A member of the Arlington Fire Department displays a COVID-19 vaccination record card at a distribution Dec. 31 at Esports Stadium Arlington and Expo Center. The card contains information about the type of vaccine administered and location.

A member of the Arlington Fire Department fills a syringe with a dose of the Moderna COVID-19 vaccine during a distribution Dec. 31 at Esports Stadium Arlington and Expo Center. About 300 people were administered the vaccine.

A member of the Arlington Fire Department displays a COVID-19 vaccination record card at a distribution Dec. 31 at Esports Stadium Arlington and Expo Center. The card contains information about the type of vaccine administered and location.

In less than a month, the city of Arlington has vaccinated over 18,000 people as COVID-19 cases surge in Tarrant County.

Since its opening in late December, the city’s vaccine megacenter — located inside the Esports Stadium Arlington & Expo Center — has become the central vaccination hub not only for Arlington, but for residents of Grapevine, Hurst, Euless, Bedford, Pantego and other cities in eastern Tarrant County.

Planning to get the center operational was in the works long before the first dose arrived in Arlington, said Richard Fegan, Arlington Fire Department Lieutenant.

Fegan said that as the prospect of available vaccines became more likely, the city began switching its priority from testing for COVID-19 to vaccinating against it.

During a Jan. 11 press conference, Arlington Mayor Jeff Williams said that the Arlington Fire Department and the Public Health Authority were essential in making the administering site welcoming for residents.

“This is a site that is customer service friendly,” he said. “From the time [residents] enter into the parking lot to the time they enter our Esports Stadium, they are being taken care of.”

Residents eligible to be vaccinated must register online through Tarrant County Public Health and receive an appointment time block along with other preregistration steps.

Residents enter the center from a designated entrance. Their temperatures are taken at the door, and masks and social distancing are enforced inside.

After that, residents are administered the vaccine and directed to a viewing area to ensure they don’t have any allergic reactions.

Since the Moderna vaccine needs to be administered in two doses, residents must wait 28 days to receive their second dose.

At the center, residents will receive a card indicating that they received the first dose and the approximate time that their next dose is due.

Fegan said this threw a slight roadblock in the process because the initial registration system was only intended for phase 1A residents. He said some residents would register through the site while others would arrive at the center not registered.

“We were faced with a choice,” he said. “Do you just turn away thousands of people that are arriving or do you allow the people in who have registered and also the people who were on-site?”

Fegan said they didn’t turn people away, essentially making the initial 3,000 doses available on a first-come, first-serve basis along with serving those who preregistered.

But this also led to people lining up hours early, sometimes in the cold and rain.

“It’s just not the best setup,” he said.

“If they had an opportunity to arrive later within their timeblock, they would be in and out of here immediately,” he said.

But Fegan said those are minor challenges, and officials are otherwise satisfied with the operation.

The site has also become a place where other medical service providers have delivered surplus vaccine doses in order for them to be administered quickly.

This vaccination blitz is occuring amid a surge in COVID-19 cases, hospitalizations and deaths across North Texas, matching patterns statewide and across the country.

Tarrant county has averaged 2,435 new cases a day and over 17 deaths a day for the past week.

“We will be getting more vaccines. We will be discovering even better ways to administer the vaccines in a timely way to everyone who is willing to get it,” he said. “This is ultimately the way to end the pandemic.”

Updated 2/28: The Shorthorn is keeping track of confirmed COVID-19 cases in Arlington and Tarrant County. In the table below, cases, deaths an…