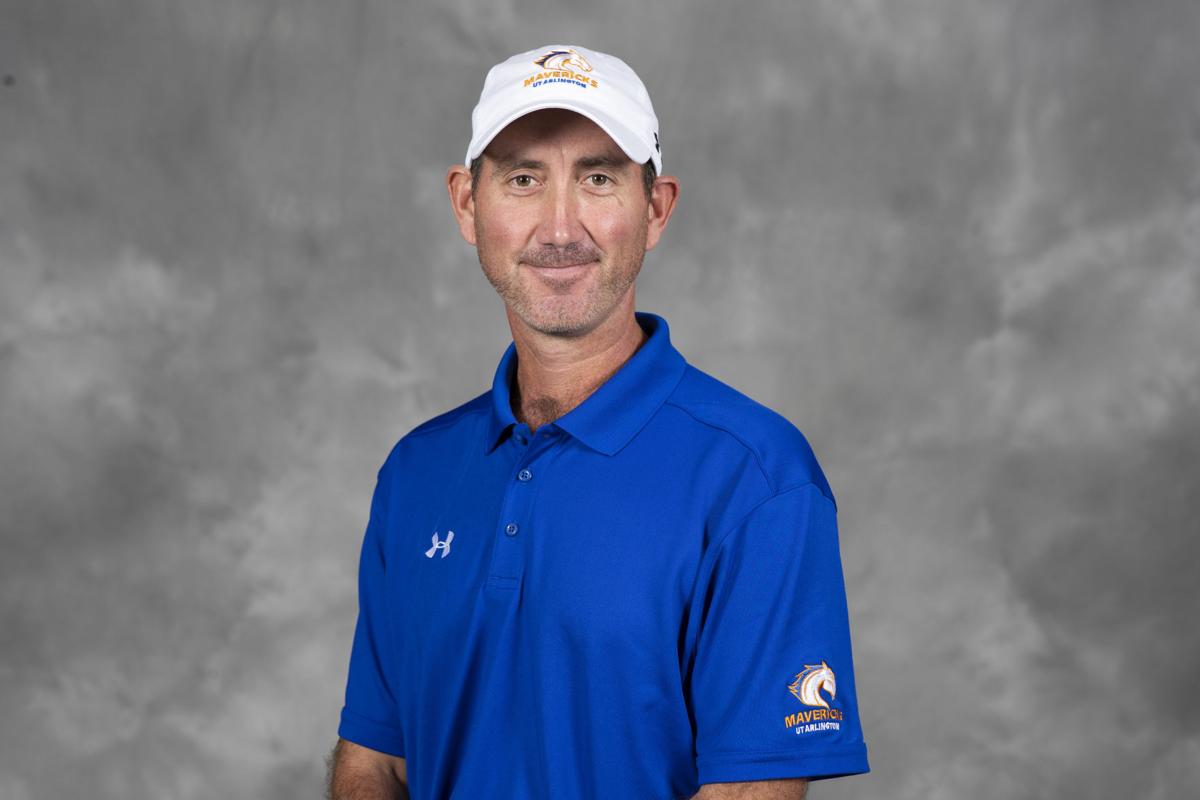 Casey Devoll, men's head golf coach, during the 2018 UTA men's Golf photo day at the University of Texas at Arlington on Monday September 24, 2018. 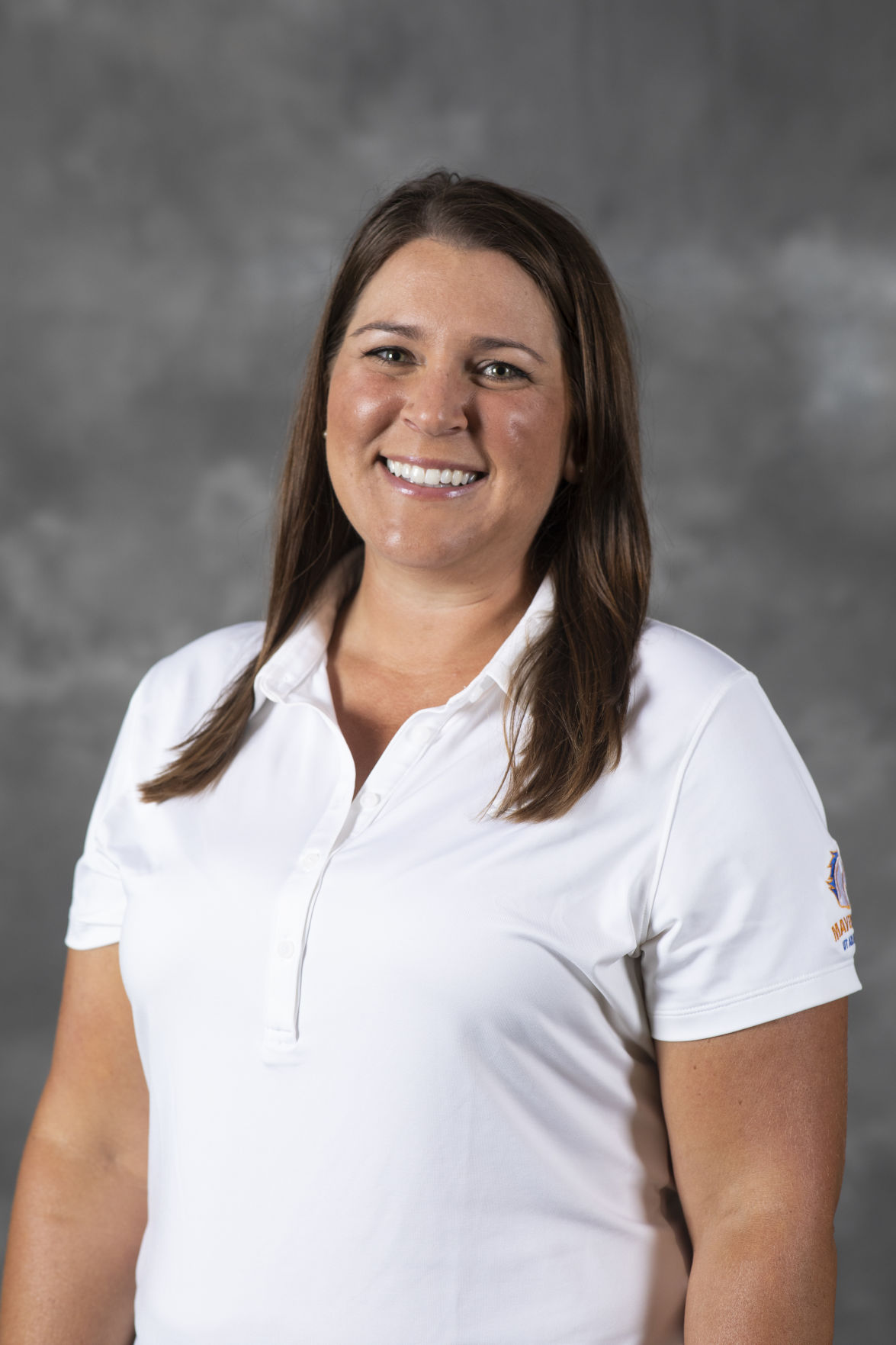 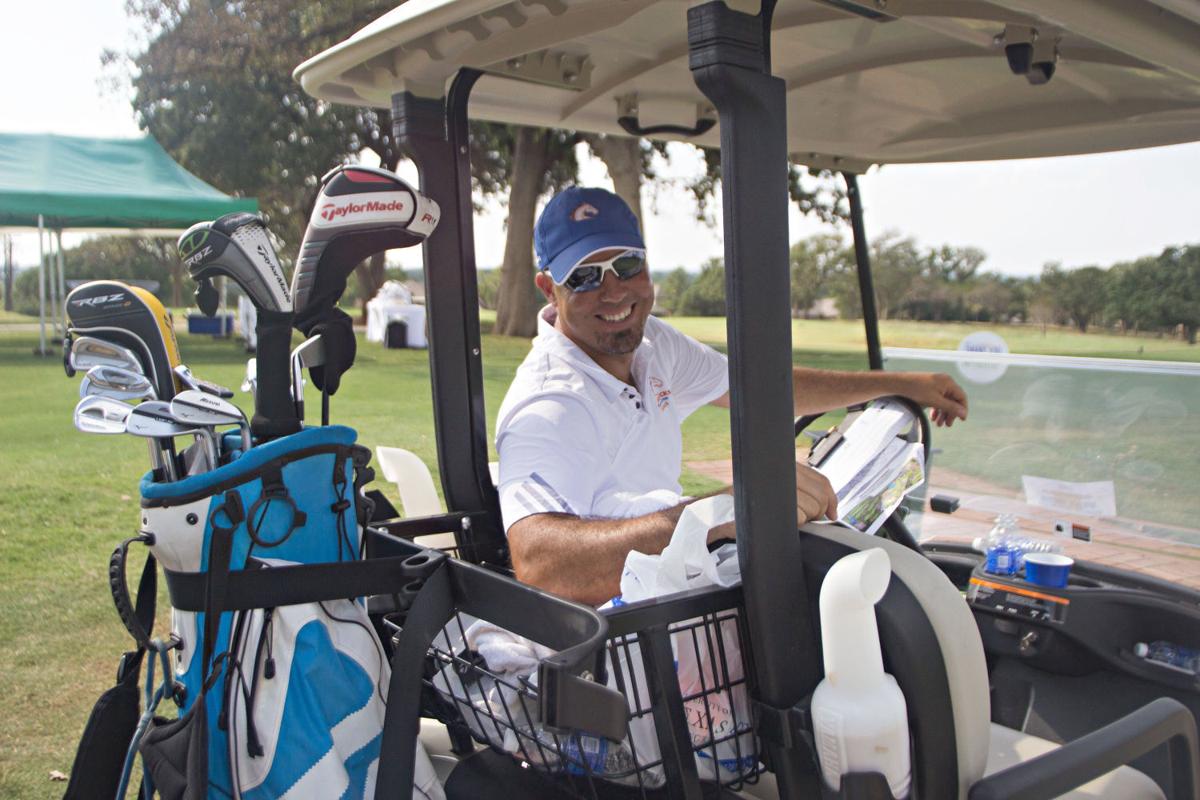 Tennis coach Diego Benitez laughs with other players before he drives to the next hole for the 15th annual Chip-N-Classic on Sept. 8, 2014 at Rolling Hills Country Club. 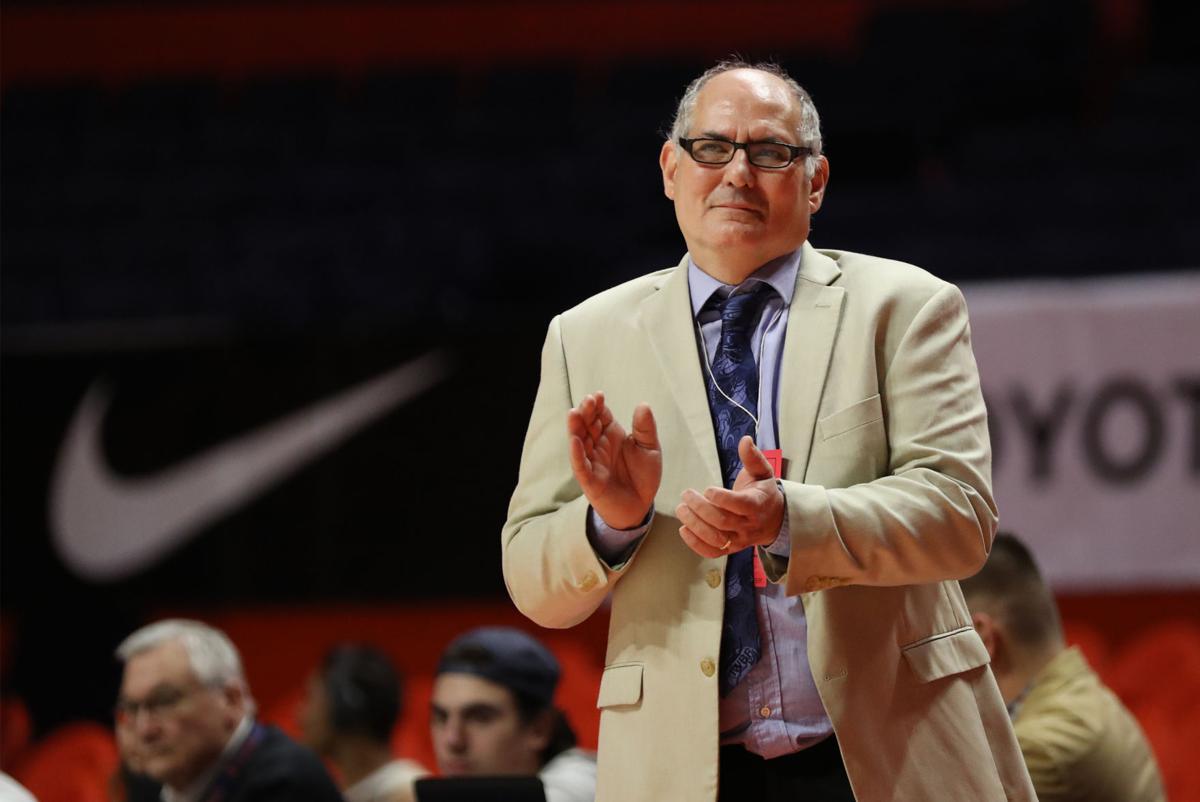 Doug Garner, Movin' Mavs head coach, claps after his team scores against the University of Illinois on March 14 at the State Farm Center in Champaign, Illinois. 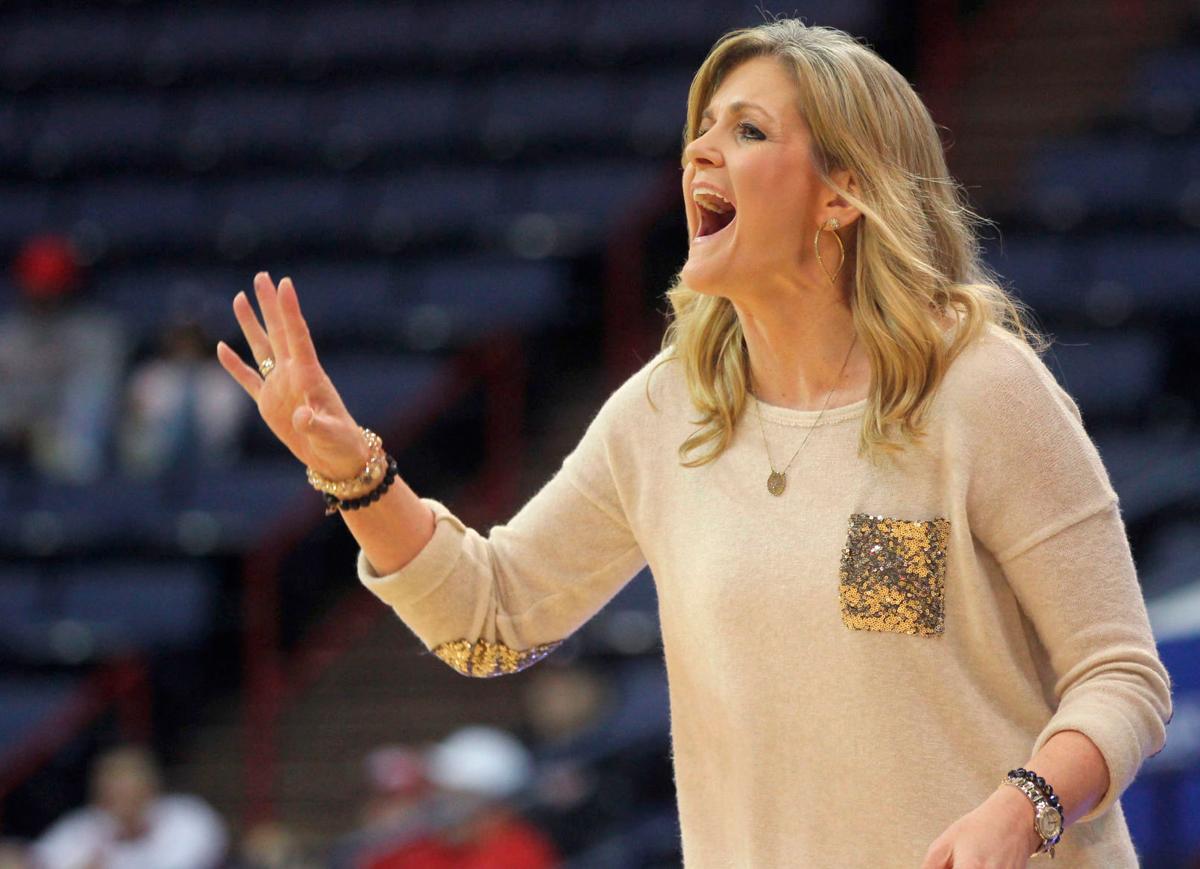 Krista Gerlich, Lady Mavericks head coach, yells at the referees during the quarterfinals of the 2018 Sun Belt Championship on March 8 in Lakefront Arena at the University of New Orleans. 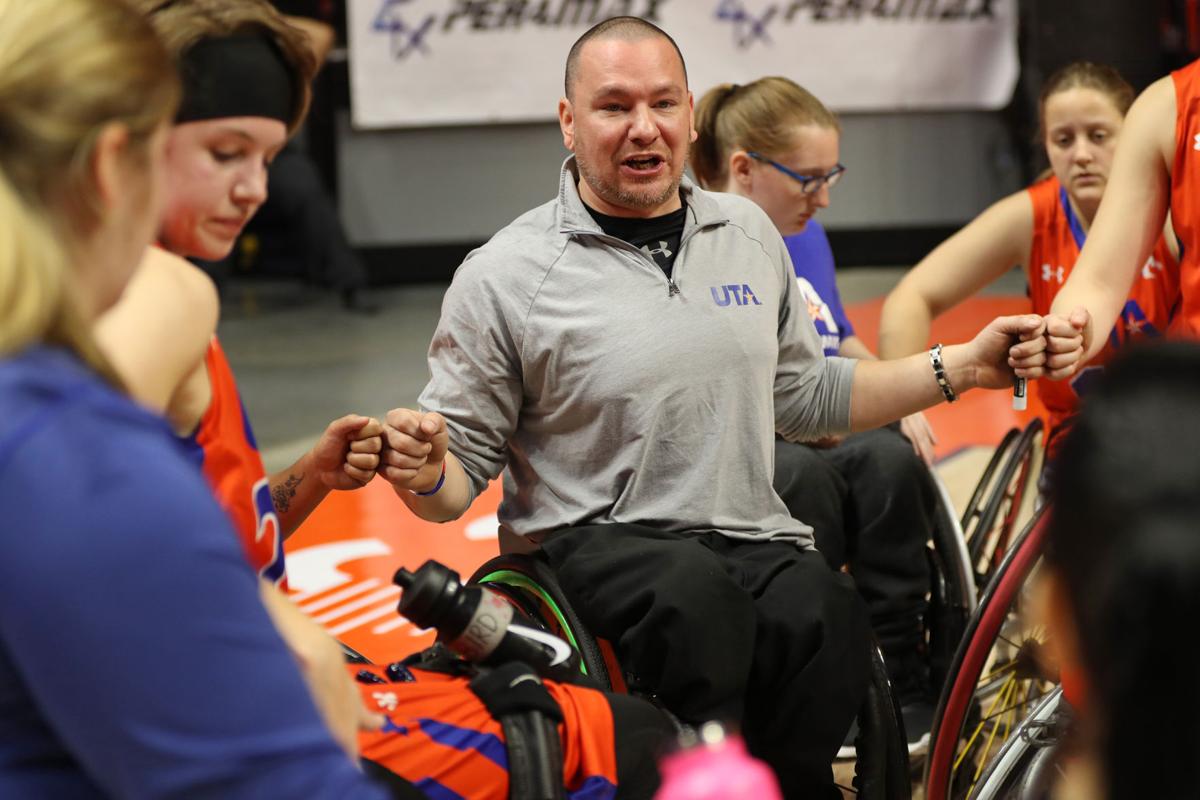 Jason Nelms, Lady Movin' Mavs head coach, huddles with his players during the game against the University of Wisconsin–Whitewater on March 14 at State Farm Center in Champaign, Illinois. 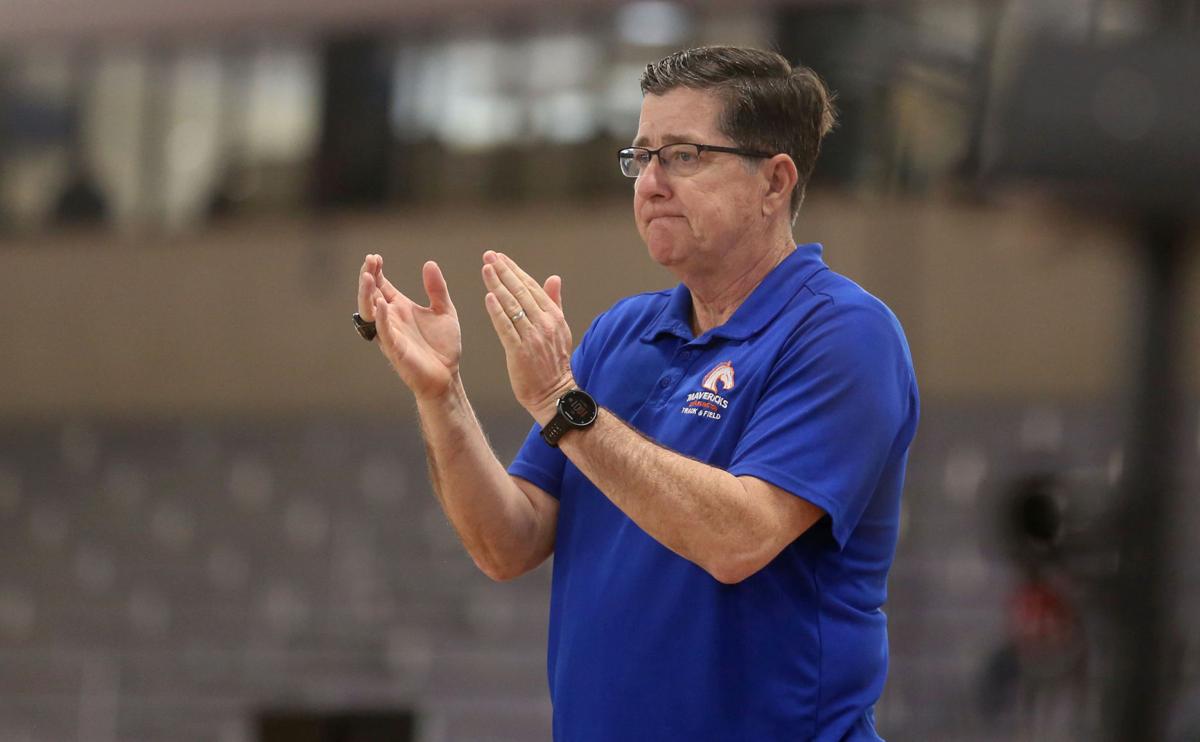 John Sauerhage, track and field head coach, claps after freshman jumper and multis Jorrdyn Dunn completes a jump in the men's heptathlon Feb. 19 at the 2018 Sun Belt Indoor Track and Field Championships inside of the Birmingham CrossPlex in Birmingham, Alabama. 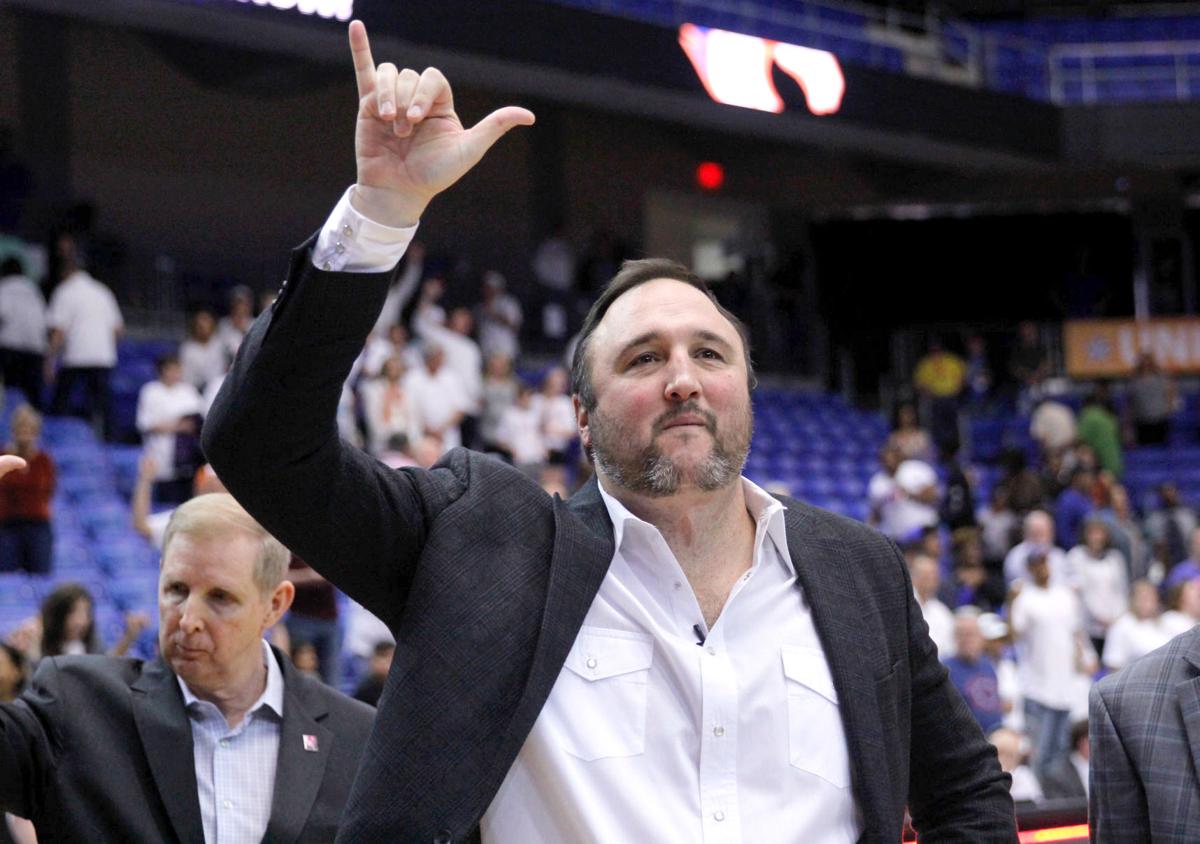 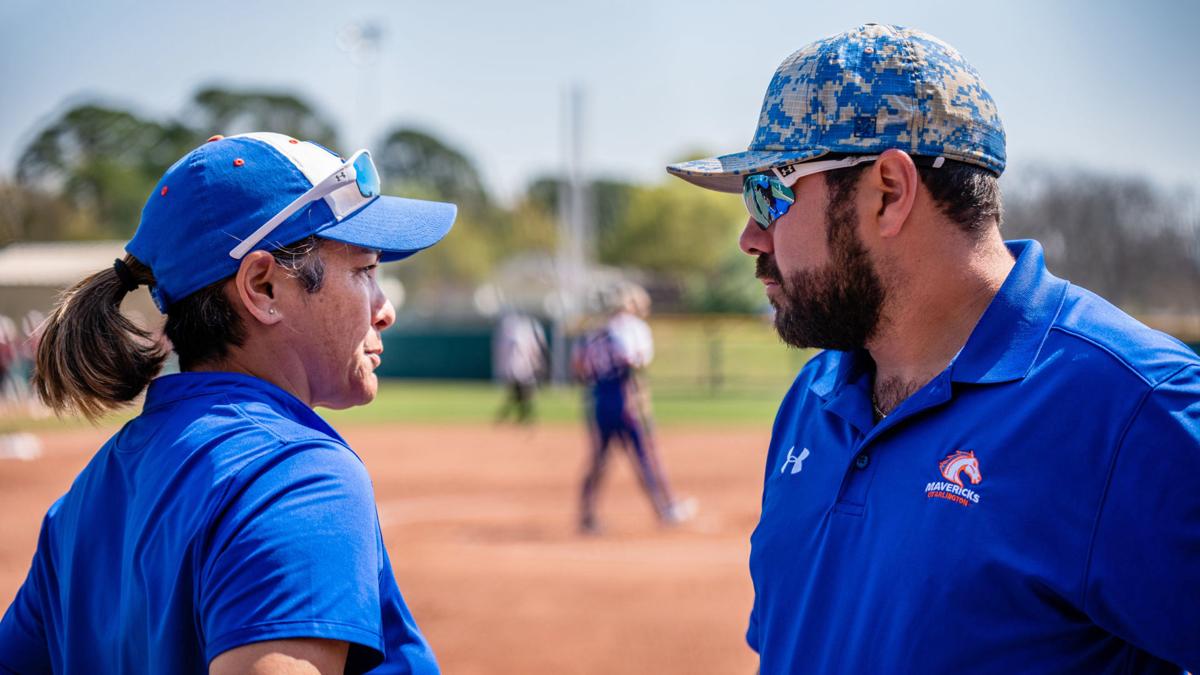 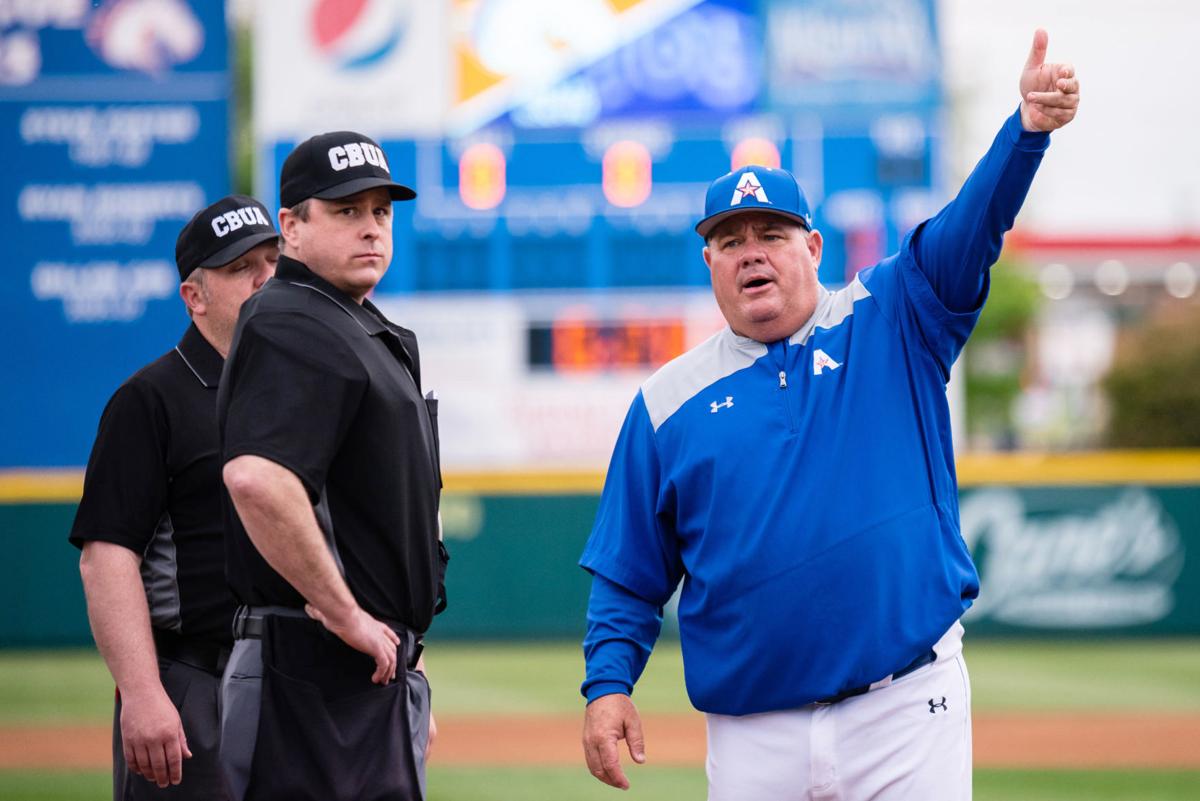 Head coach Darin Thomas signals a player during the game against Texas Christian University on April 16 at the Clay Gould Ballpark. 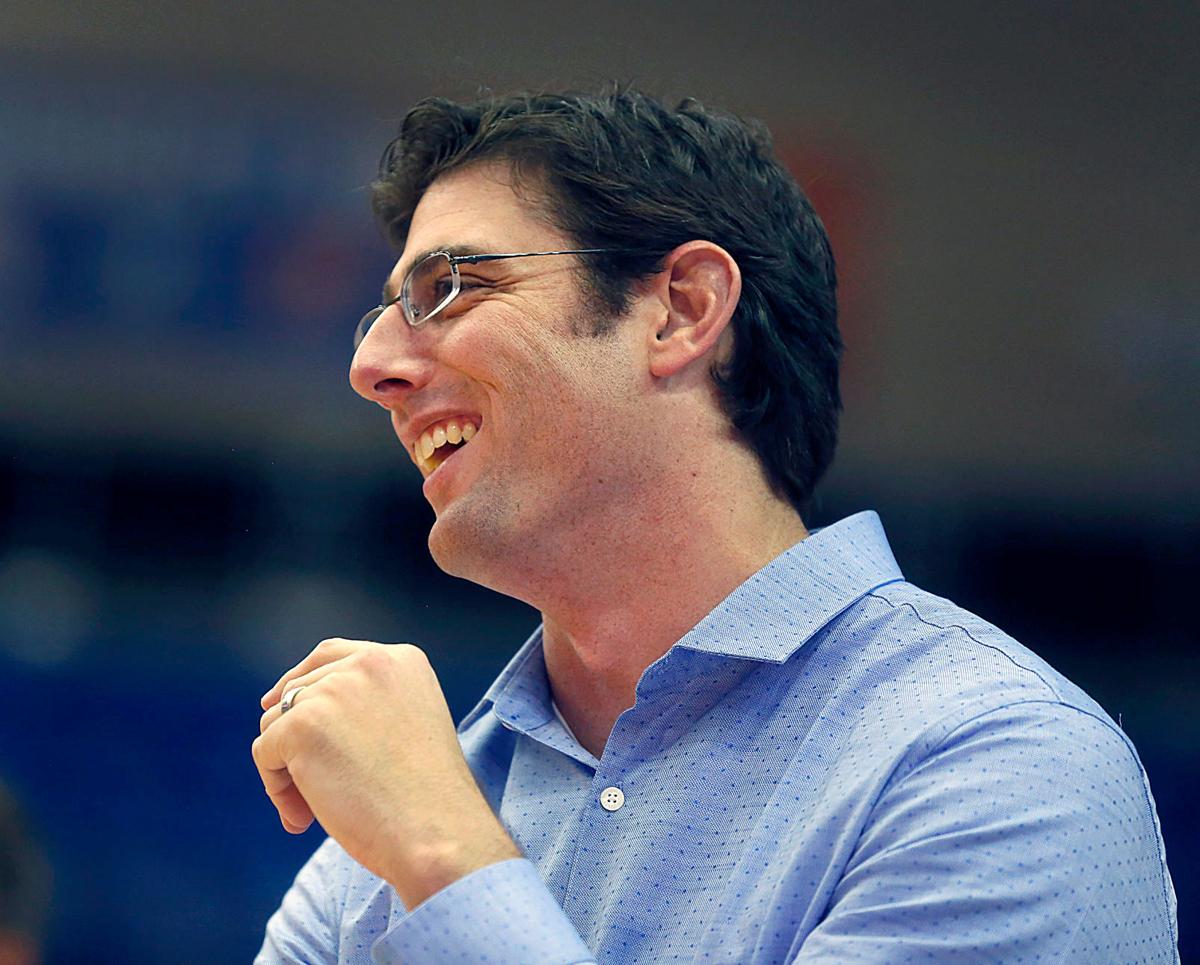 Head coach J.T. Wenger smiles after the Mavericks defeated the University of Louisiana-Monroe on Nov. 10, 2017 at College Park Center.

UTA has 12 athletic programs on campus, some of which have received national recognition in the past few years.

Three UTA head coaches received Sun Belt Conference Coach of the Year honors in the 2018-19 season, while another head coach was inducted into the Hall of Fame for his respective sport.

Here’s what you need to know about the people at the helm of UTA’s athletic programs.

In his first season at UTA, Ogden led his team to a 17-16 overall record. The Mavericks compiled a 12-6 conference record and advanced to the championship game of the conference tournament but couldn’t get over the hump and fell to Georgia State University by a score of 73-64.

Before coming to UTA, Ogden spent two seasons as an assistant coach on Chris Beard’s staff at Texas Tech University. The UT-Austin alumnus also spent 13 seasons on Rick Barnes’ staff during his tenure at Austin and the University of Tennessee.

Gerlich is coming off her most successful season since she was hired at UTA in 2013. She led UTA to a 24-8 overall record in the 2018-19 season, giving her the most wins in a single season in program history. Gerlich’s squad also conquered a share of the regular season Sun Belt championship after it finished with a 15-3 conference record.

The team earned a bid to the Women’s National Invitation Tournament and claimed a 60-54 victory over Stephen F. Austin State University in the tournament’s first round. It was the program’s first postseason victory. Since being hired as the women’s basketball head coach, Gerlich has compiled a 100-83 record.

In the 2019 season, Thomas led the baseball team to signature wins over 19th-ranked TCU, 17th-ranked Baylor University and Dallas Baptist University. The team captured more than 30 wins on the season, which was an improvement from the 22-35 overall record it compiled in 2018.

Thomas took over as head coach of the baseball program in 2008 after being on staff as an assistant for seven years.

Prior to UTA, Thomas served as an assistant coach for nine years at Seward County Community College.

Brun led the Mavericks to a 17-10 conference record in the 2019 season, good enough for the third seed in the 2019 Sun Belt Conference Softball Championship. The team fell to the University of Louisiana Monroe 5-2 in the elimination bracket of the conference tournament but still earned a bid to the National Invitational Softball Championship. They went on to win the postseason tournament for the first time in May.

Brun was hired to lead the softball program in August 2017. Prior to UTA, she spent nine years as an assistant coach at Texas State University. Before Texas State, she served as the head softball coach at the University of Hawai’i at Hilo, where she compiled a 63-33-1 overall record.

Last season, Garner was inducted into the 2019 National Wheelchair Basketball Association Hall of Fame. He took over as head coach of the Movin’ Mavs in 2008 and led the program to a national championship in 2017.

Most recently, Garner led the Movin’ Mavs to a third place finish at the 2019 National Intercollegiate Wheelchair Basketball Tournament.

Garner selected Nelms to lead the first Lady Movin’ Mavs team in 2013. He has since led the team to national championship victories in 2016 and 2018.

Most recently, Nelms led the Lady Movin’ Mavs to a second place finish in the 2019 National Intercollegiate Wheelchair Basketball Tournament. The team fell to the University of Alabama by a score of 82-76 in the championship game of the tournament.

Wenger completed his second season at UTA in 2018, where his team compiled a 16-12 overall record. The team was able to clinch the fifth seed in the 2018 Sun Belt Conference Volleyball Championship. Wenger’s team lost in the quarterfinal round of the tournament after falling 3-0 against the University of Arkansas at Little Rock.

Wenger was hired at UTA in 2017 after former head coach Diane Seymour retired in late 2016. He spent the 2016 season as assistant coach at Michigan State University, where he helped lead the Spartans to a 25-9 overall record.

Benitez is heading into his 15th season as the head coach for the men’s and women’s tennis teams. In 2016, he led the men’s team to its first conference title since 2006.

In March, Sauerhage agreed to a five-year contract extension that will keep him at UTA through the 2023-24 season.

Devoll and Matranga took over the men’s and women’s golf programs after former golf director Stuart Deane resigned in October 2018. Both were promoted to head coaches in May.

In the final 13 rounds of the 2018-19 season under Devoll, the men’s golf team went a combined 29-under-par with nine under-par rounds. This was a marked difference from the 254-over-par the team had through its first 18 rounds of the year.

Under Matranga, the women’s golf team recorded six straight rounds below 310. This was the first time in program history the feat had been achieved.

Devoll and Matranga served as associate head coaches for the golf programs since the 2016-17 season.