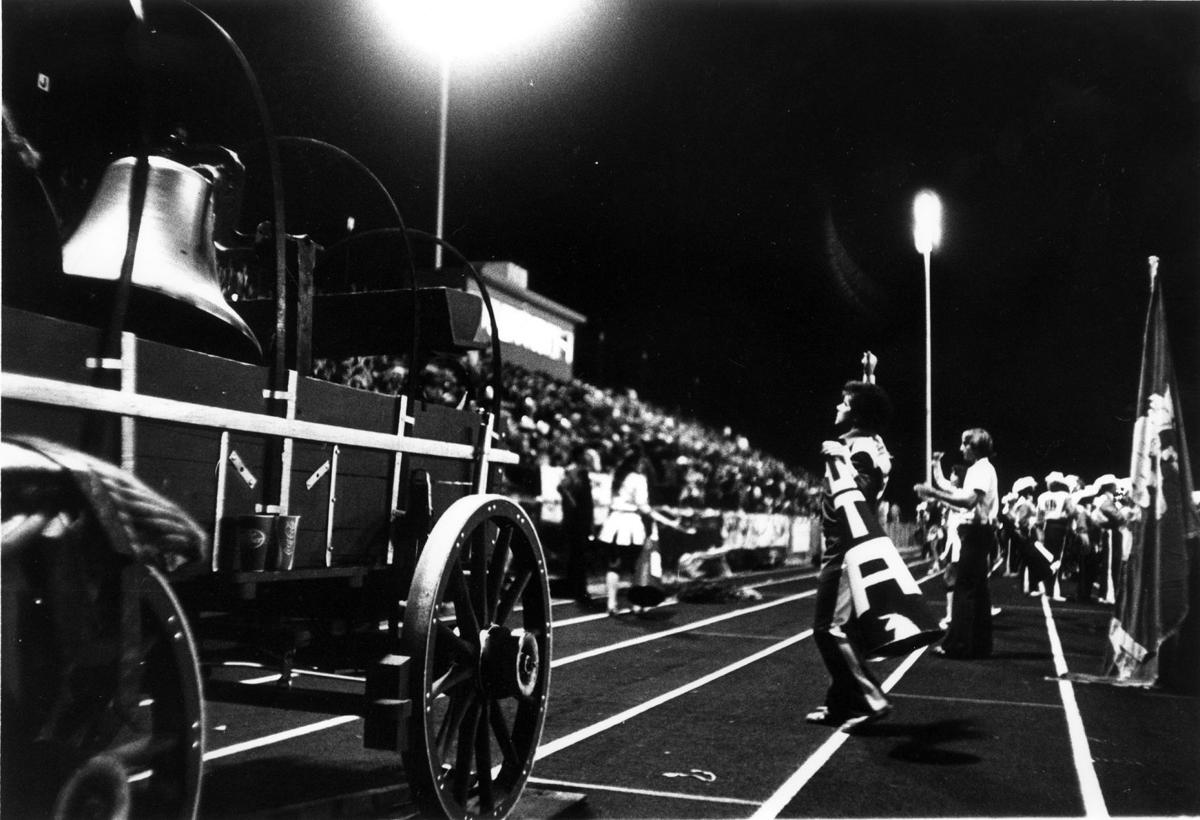 The Victory Wagon pictured at a football game between 1968 and 1985. 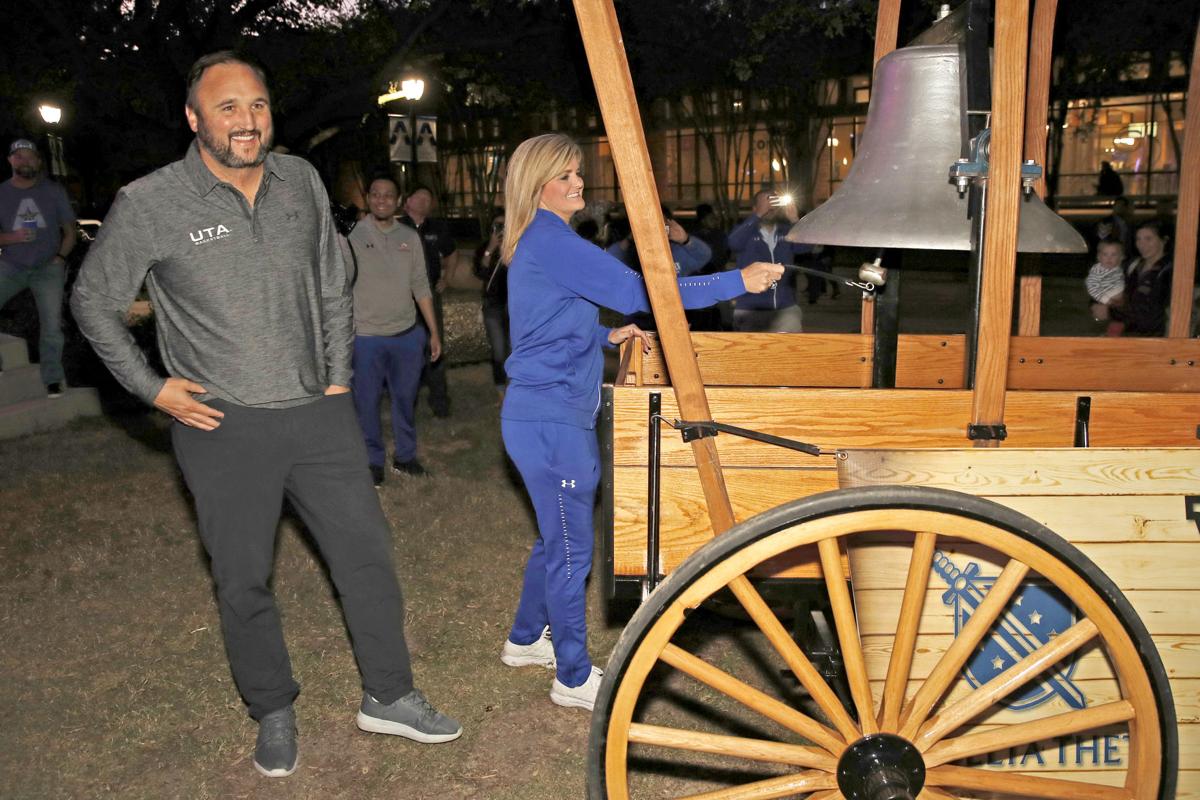 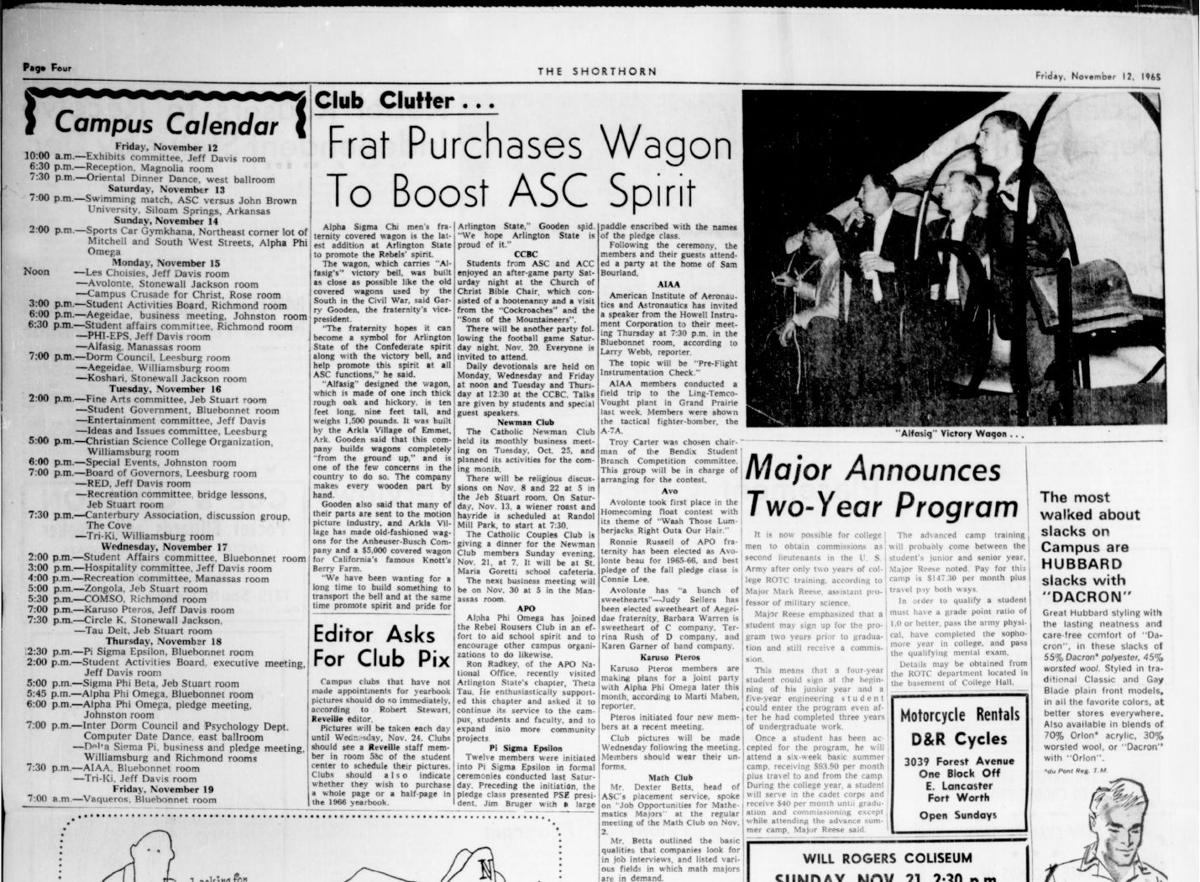 Alpha Sigma Chi fraternity purchased the wagon and bell in 1965 to promote school spirit at UTA, known at the time as Arlington State College.

Alumnus Emory Estes remembers how the sound of the Victory Bell filled the stadium following a big play or touchdown during UTA football games.

The bell, carried on a horse-drawn carriage called the Victory Wagon, sat on the sidelines of football games for years until the program was killed in 1985.

“Even with the loud crowd, you could hear that bell down on the field,” said Estes, an offensive lineman for UTA from 1968 to 1973. “It was a really classy way to celebrate a touchdown, extra point, maybe a turnover or after we won a game.”

He hasn’t heard the bell ring since his final game as a Maverick.

Now, nearly 35 years later, the bell will make its official return to mark the start of UTA’s 2019-20 basketball season. The wagon is owned by the Phi Delta Theta fraternity and will be loaned to the athletic department for the season.

Estes said he lived through an interesting phase of UTA’s history as he was “the last of the Rebels and the first of the Mavericks.” This was during the time when UTA changed its mascot away from its Confederate ties in 1971.

The bell, however, never took on that connotation and always represented “victory,” Estes said.

The Victory Wagon first came to UTA in the fall of 1965, when the school was known as Arlington State College and had the Rebels as a mascot. The social club Alpha Sigma Chi purchased the wagon from Arkla Village in Emmet, Arkansas, known for making vintage style wagons.

“Alfasig,” as it was known at the time, was absorbed by the national fraternity Phi Delta Theta in 1968, when Arlington State College moved into the UT System and allowed nationally affiliated Greek organizations the year prior. The fraternity kept the wagon tradition alive at football games until the sport was disbanded in 1985.

“Anything that we can bring forward that unites the university and unites the students and unites athletics is extremely important,” Estes said.

John Madden, UTA and Phi Delta Theta alumnus, said the bell was the unofficial symbol of campus and became engraved in the college’s football culture. He wants to bring back the game spirit that he experienced during his time at football games for a new generation of students.

“We’ve gotta build on basketball, and we’ve gotta have something to rally around,” he said. “The bell has tradition.”

Athletic director Jim Baker said Phi Delta Theta and the athletic department came to an agreement over the summer to bring the wagon inside College Park Center to ring before games by an honorary guest.

Doug Russell, UTA and Phi Delta Theta alumnus, was selected as the first honorary ringer of the bell for the Mavericks season opener on Tuesday.

The bell and wagon have been at events such as Homecoming, outside College Park Center before big games and for Fourth of July parades. However, Phi Delta Theta alumni were interested in bringing the wagon inside to games to recreate the atmosphere from football.

The original wagon was 10-feet long, 9-feet tall and made of 1-inch thick rough oak and hickory, according to a Nov. 12, 1965 Shorthorn article. It was designed to resemble the covered wagons used in the Civil War era to go along with the Rebel theme.

The new wagon is made of white oak wood on a steel frame. It was built in 2014 by Justin Carriage Works, now Todd Andler’s American Carriage Company, in Nashville, Michigan.

The bell was meant to promote school spirit and become a symbol of Arlington State College, said Gary Gooden, then Alpha Sigma Chi vice president, in a 1965 Shorthorn interview.

“We have been wanting for a long time to build something to transport the bell and at the same time promote spirit and pride for Arlington State,” Gooden said. “We hope Arlington State is proud of it.”

Baker said he wants the campus to reconnect with alumni because of how much the campus has changed over the decades.

“All universities are built on tradition,” he said. “That’s what we’re trying to do is continue to get people to come to the games.”

Baker said it opens the door for other items from the past to be brought back as symbols of UTA pride.

Perry said UTA needed to bring back some of the traditions and history from its old sporting culture, and the Victory Wagon was the way to do it.

“It was a bunch of old guys that remembered what we did,” Perry said. “It was a real centerpiece for the university in the old days. So it brings back a lot of memories. So I didn’t have to talk too much to some of the old guys to get them fired up about seeing it come back.”