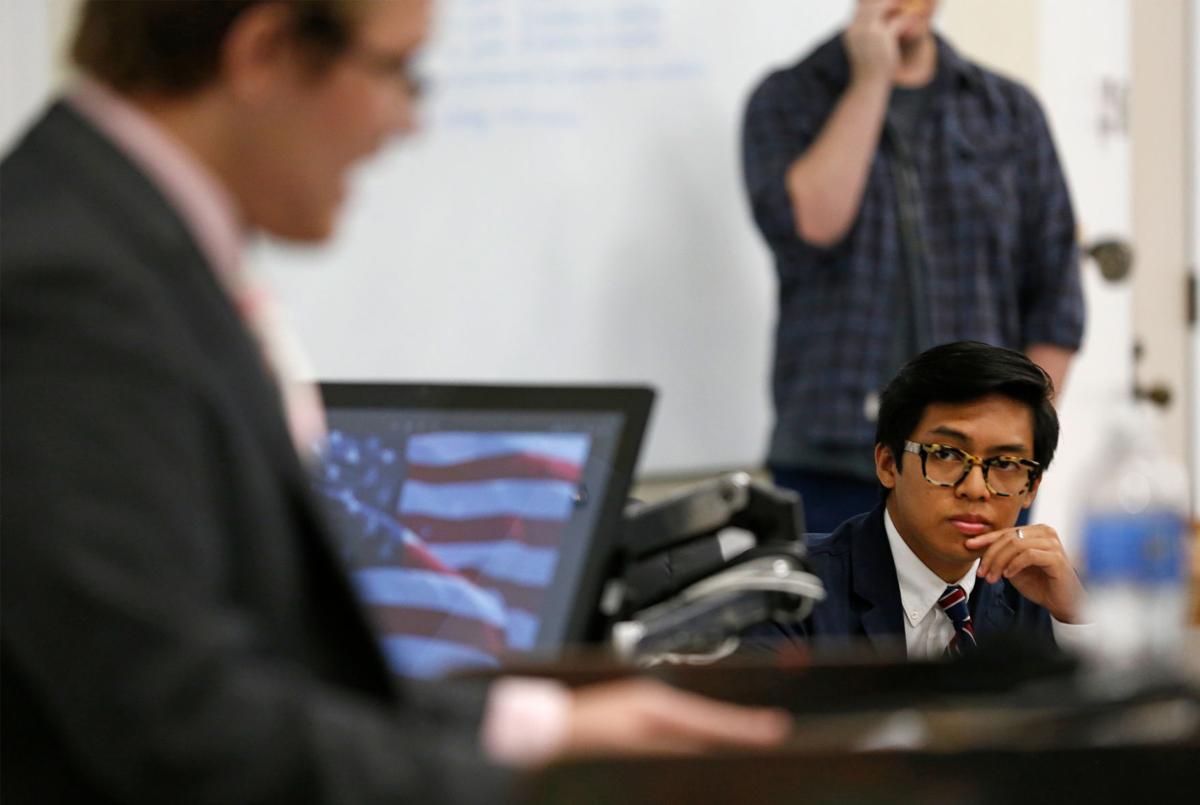 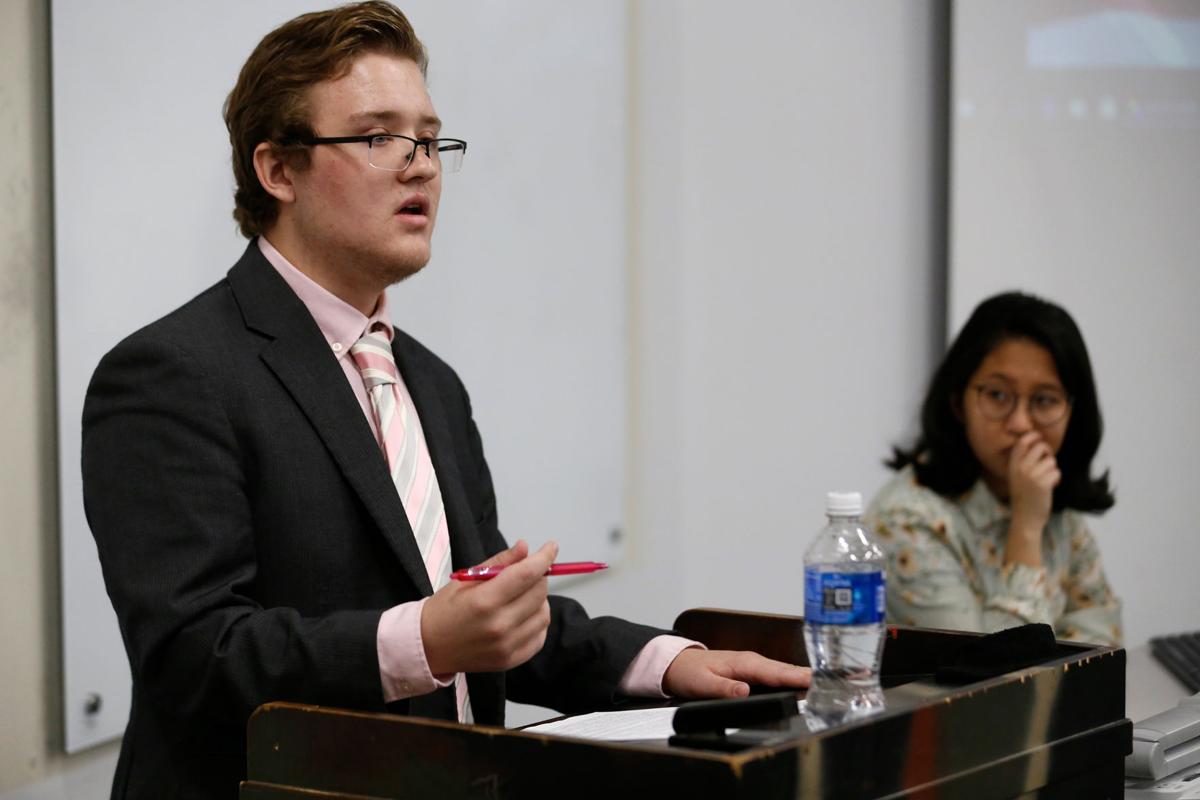 Community Voices columnist Jonathan Demarest makes a point during a debate Nov. 22 at College Hall. Demarest said Christianity should be progressive and tolerant. 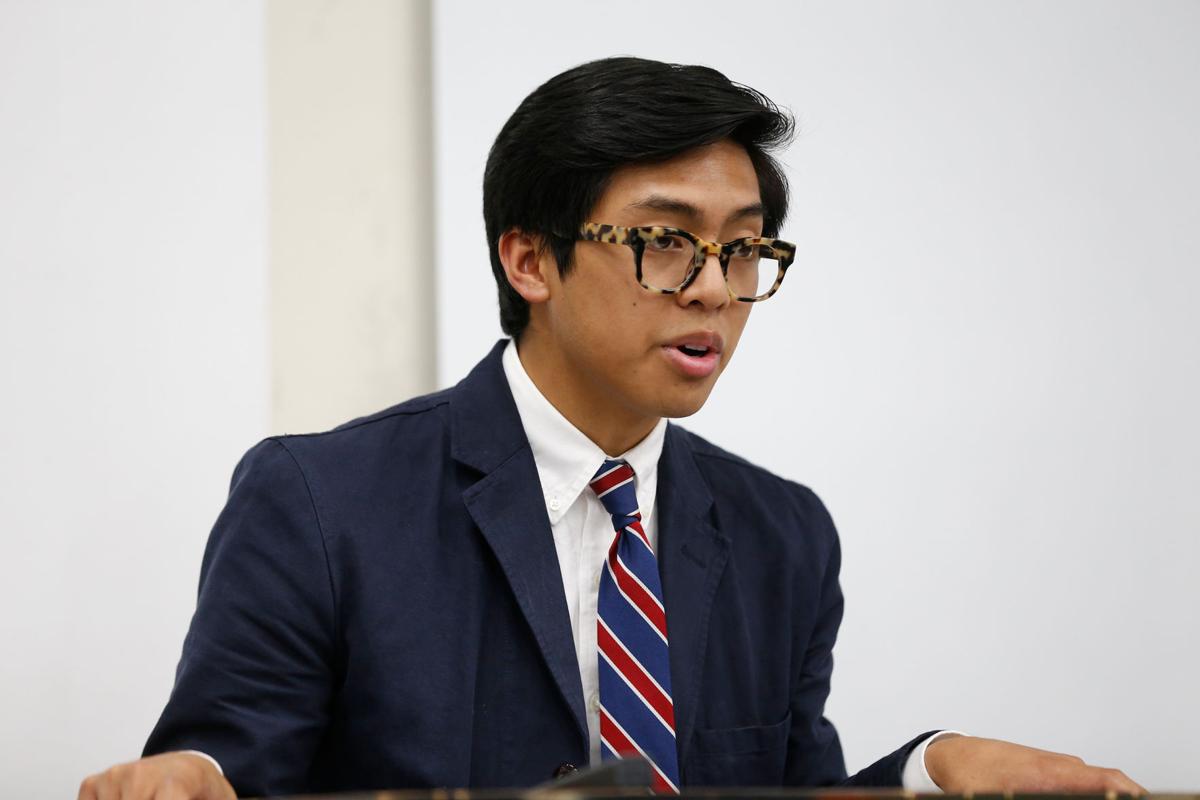 Community Voices columnist Jonathan Demarest makes a point during a debate Nov. 22 at College Hall. Demarest said Christianity should be progressive and tolerant.

Community Voices is a volunteer columnist program run by The Shorthorn; however, the event was not organized or moderated by the publication.

UTA’s Turning Point USA chapter is an organization that restarted this semester and has hosted a guest speaker and now two debates, said organization co-president Reese Surles. The accounting freshman said the organization usually has two different types of meetings, featuring either guest speakers or debates.

The debate between the two columnists started when Demarest, a political science junior, wrote a Community Voices column titled “Opinion: Progressives need to highlight their religious advantage,” on Nov. 6. In it, Demarest made the case that progressives are more Christian than many would think. Citing Christian principles of tolerance, humanitarian spiritual growth and equality, he said he believed the progressive ideology most closely resembles the teachings of Jesus.

Abaya, an architecture graduate student, rebutted Demarest in his Community Voices column “Opinion: Liberal Christianity is no Christianity.” In his response, Abaya said the principles referenced in the previous column hollow out the orthodox beliefs of Christianity in favor of a revisionist interpretation.

Following the Lincoln-Douglas debate format, Abaya and Demarest flipped a coin at the start of the event to see who would speak first, and then each proceeded to speak, rebut and answer questions from the audience and moderators.

In his opening statement, Abaya called Demarest’s progressive Christianity “moralistic deism” and said it was rampant on the right and the left. He said the importance of the debate was about defining the Christian message and to delve into the text of the Bible to determine what it is.

“Christianity is not a subjective religion,” Abaya said in his closing statement.

He said the only reason people know how to act is because God has spoken. The points given by Demarest were just conjured up in the moments he had been speaking, Abaya said.

Demarest said in his opening statement that his political beliefs were not contrary to Christianity but rather an extension of it. He said he used to view religion as a vessel for oppression, driving him to apathy and disdain for Christianity as a whole.

“God has gifted us with the ability for logic and reason, thus it is our duty to apply these gifts to the Bible, theology and to the world,” Demarest said.

When viewing passages that seem oppressive, he said he came to the conclusion that they needed to reflect on Christianity and their understanding of the Bible.

“If we really want to create a Christianity that cares about humanity, then we need to be able to look at what we have so far, as far as faith is concerned, and rework it,” Demarest said in his closing statement.

Business management junior Leah Heinzman heard about the debate through Demarest, who is her friend.

She said she thought the debate had an equal number of similar and differing opinions.

“For my personal faith, it was really interesting to hear both, very empowering for both,” Heinzman said. “It kind of helps you see where you are in your faith.”

Genuine question: how can you argue that Jesus wasn't tolerant and think that sounds okay? Like you might as well just outright admit your religious beliefs are based on hate lol

I don't think anyone has the right to declare their version of a religion is correct. No one knows the truth. It's screwed up to tell someone their beliefs are invalid because they don't match yours. Y'all should sit and think about that before you start trying to act like you're better than people that actually want to promote tolerance and love. It's pretty backwards, considering Jesus was supposed to be loving and forgiving.

"Genuine question: how can you argue that Jesus wasn't tolerant and think that sounds okay?"

- Genuine followers of Jesus go to Heaven. Everyone else goes to Hell. Does this sound tolerant? John 3:36

- Those who fail to repent go to Hell. Does this sound tolerant? Acts 3:19

- "and he will rule them with a rod of iron, as when earthen pots are broken in pieces, even as I myself have received authority from my Father." Does this sound tolerant? Revelation 2:27

- "And they cried to the mountains and the rocks, “Fall on us and hide us from the face of the one who sits on the throne and from the wrath of the Lamb." Does this sound tolerant? Revelation 2:27

- Jesus explicitly states their are instances in which you will NOT be forgiven. Matthew 6:15, Matthew 12:32

Christians let the Bible, not the culture, define words such as love and hate. If I see someone sitting on the train tracks with a train approaching, it's not "love" to smile and wave and "tolerate" their beautiful decision to sit on the train tracks. There is a God, that's demands justice for sin. Either you repent and believe and Jesus pays your sin debt, or you get justice; eternity in Hell.

It's not about me being better than you. I have no problem admitting that I fail constantly and apart from Jesus, I'm a dirtbag. The difference is that I rely on Jesus to be my advocate when I am judged in Heaven (by believing and repenting), and you seem to think you need no such advocate.

You call me hateful when my speech doesn’t align with your worldview. Which, isn’t the case. Nice ad hominem attack pal. Jesus is loving and forgiving, but he isn’t tolerant. Jesus is God and He gave the people on Earth Ten Commandments. Which, means that he is intolerant of unjust actions. From your perspective you would claim that we should be tolerant. Thus, we shouldn’t prosecute those who commit murder? We shouldn’t prosecute those who steal? Not to mention you claim that nobody knows the truth. So, why do you speak? Your argument is flawed. Go ahead, I’m waiting on another personal attack. Think critically before you speak.

Demarest wants to twist the words of Christ and fit it towards his worldview. Jesus wasn't tolerant. He overturned the tables of the money changers saying, " It is written, My house shall be called the house of prayer; but ye have made it a den of thieves."

“If we really want to create a Christianity that cares about humanity, then we need to be able to look at what we have so far, as far as faith is concerned, and rework it”

My "reworked" version of Muhammad say he was wrong and Jesus is Lord.

My "reworked" version of the Pope says Protestantism is superior to Catholicism.

Faith "reworks" you. You don't "rework" faith. "Reworked" faith = no faith at all. It's self-deception.

Easier to destroy the church from within.